Duels have been commonplace throughout history and have taken many forms. Many centuries ago, it wasn’t uncommon to see gallant gentlemen both fall in love with a fair lady and decide to go to the streets with their swords to fight one another till first blood for her affections. More recently, in the American Wild West, duels were perhaps more common. Gunslingers, outlaws, and lawmen would meet at high noon, so stories say, to count their paces, turn around, and fire their six-shooters in cold blood to settle a debt or argument or, once again, for the hand of a woman.

What all of these examples have in common is that they feature men wielding the weapons. Whether they be sword fights or gunfights, high European society or the Wild West (or frankly anywhere in history) the duelists are male. This makes sense, given how patriarchal society was until about a century ago. Women had limited freedoms and a totally different set of standards. Despite the norm, there were some women who took up arms against one another or even against other men. This is a list of ten female duels and duelists. 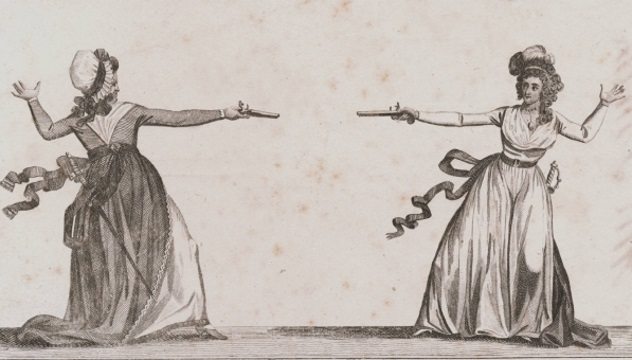 They started with pistols as heir weapons. Neither woman was injured by a bullet, but Lady Braddock’s hat was not so lucky. Since neither combatant was hurt in the gunfight, they opted for swords. Mrs. Elphinstone was the victim this time, taking a cut to the arm. After that, she apologized for her comment, and the two were friends once again.[1] 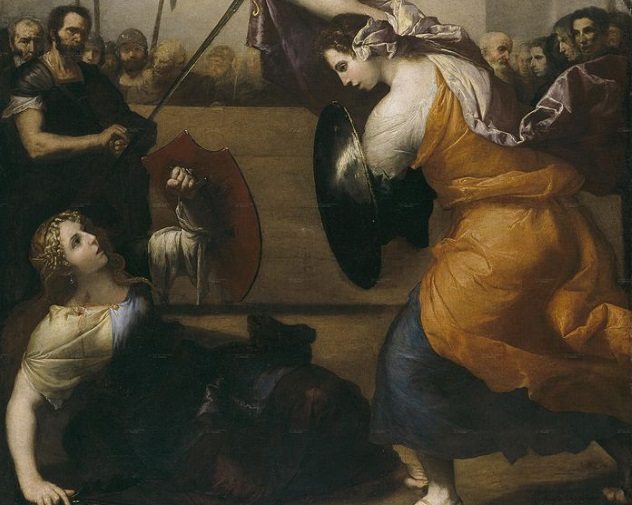 Italy is portrayed today as one of the most romantic countries in the world, and it was no different in the 16th century. According to the legend, Isabella de Carazzi and Diambra de Pettinella of Naples were both madly in love with Fabio de Zeresola. Since they couldn’t both have him, the two decided to fight for his love.

The winner of the duel is unknown, but the affair went down in history as a great spectacle. In fact, the artist Jose de Ribera painted a scene from the brawl in his 1636 piece called Duelo de Mujeres, which is Spanish for “duel of women” or “women’s duel.”[2] 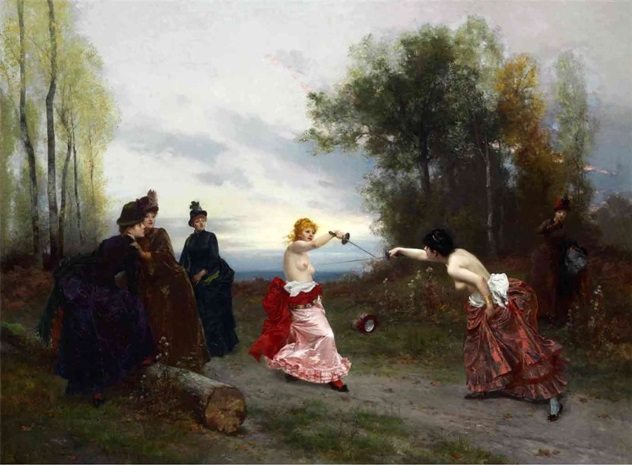 According to an 1892 newspaper report, two Austrian noblewomen, Princess Pauline Metternich and Countess Anastasia Kielmannsegg, dueled over floral arrangements at a function in Vaduz. Princess Metternich was the wife of an Austrian ambassador to Paris under Napoleon III. As an esteemed socialite, every little detail of the event, including how the flowers were arranged, must have been important—enough that she would risk her health, if not her life, to defend her tastes.

The winner of the duel was undecided. Both women experienced wounds; Princess Metternich took a cut to the nose, and Countess Kielmannsegg was slashed in the arm.[3] They did take safety precautions, of course. One of those presiding was Baroness Lubinska, who had some medical training. Another precaution was dueling topless. The fear was that any clothes which got jammed into a wound would cause in infection, so sensibly, they removed the clothing. It is reported that Baroness Lubinska told surrounding men, “Avert your eyes, you lustful wretches!” Even if that tidbit of the tale is not totally accurate, it adds to an already interesting story! 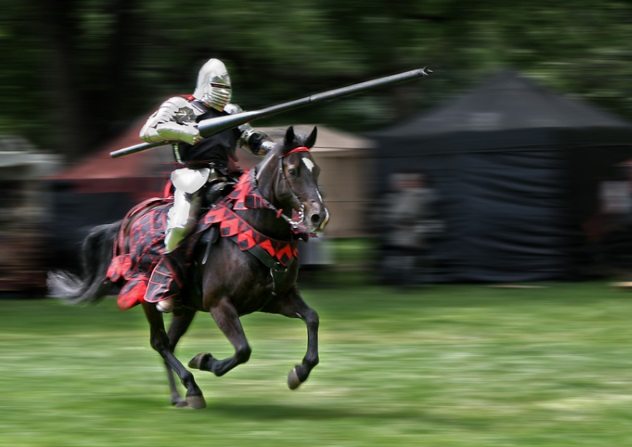 Agnes Hotot dueled in a different kind of way: She jousted.[4] Born in 14th-century England, she was the daughter of the earl of Dudley. The earl had gotten in a dispute with another gentleman, and to settle it, they opted to joust. In the most untimely fashion, Dudley fell ill just before the joust was scheduled to take place. To protect her father’s honor, Agnes donned the armor herself, disguising herself as a man, and fought the joust in his place.

Not only did she fight, but she won. In celebration of her victory, she unmasked herself in front of her opponent to reveal her true identity and gender. To us today, this would not be as big of a deal, but in the 1300s, being beaten by a girl would have been an extreme humiliation. 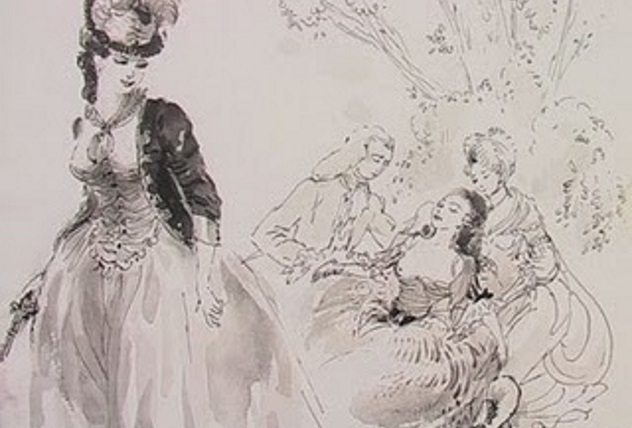 This 18th-century French duel was once again for the affections of a man, the duke of Richelieu. Madame de Nesle singled out Madame de Polignac as a great rival and finally challenged her to a duel for the duke’s heart. De Polignac accepted, and the two took up arms, with two squires as witnesses. This time, the weapons of choice were pistols, not swords.

The rules of the duel were simple: They could advance as far away as the length of a scarf and could fire at any given moment. De Nesle was the first to pull the trigger, but she missed de Polignac entirely. Madame de Polignac, upon her turn, succeeded in wounding Madame de Nesle’s shoulder. Alas, despite these efforts, neither woman got the man.[5] 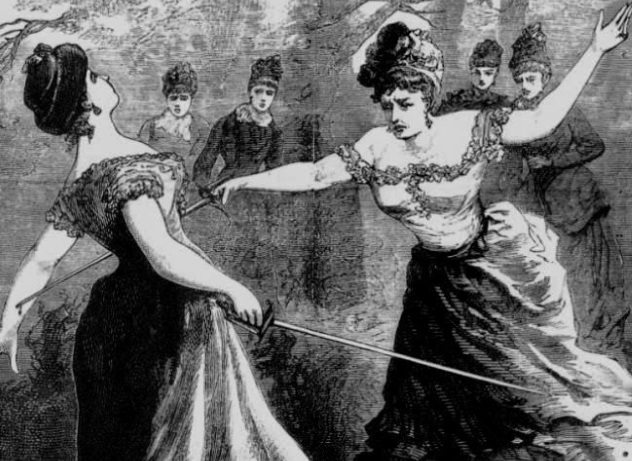 This duel is perhaps the least petty of all the duels on this list. That is, it isn’t about flowers or age. It was one of politics and patriotism, which in the 19th century, was probably not really expected of women.

The duel took place in France, between American feminist Miss Shelby and bold, provocative French feminist and activist Madame Marie-Rose Astie de Valsayre. The two got into a heated argument over whether France or the United States had better female doctors. To settle this matter of medicine, these ladies took to the fields of Waterloo to battle it out on-on-one, blades in hand, 15 days after the argument.

Astie de Valsayre confidently wrote that the delay was so that her opponent could practice, making it a more even match. Despite the time to prepare, Miss Shelby lost, receiving a wound in her shoulder.[6] 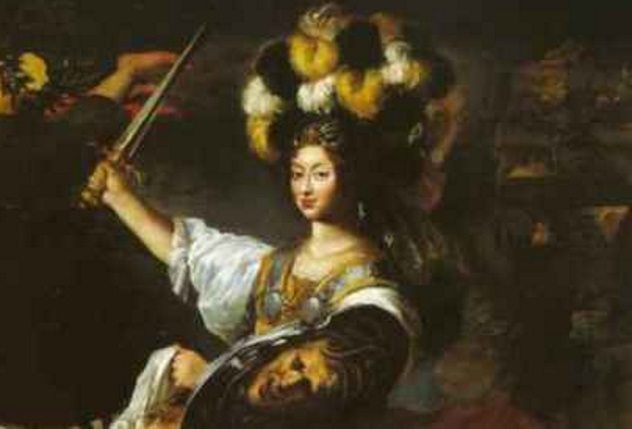 Madame de Saint-Belmont’s story is similar to that of Agnes Hotot’s. The madame was in charge of her French estate after her husband was taken prisoner. While she was there alone, another gentleman came to her home and took up residence, uninvited, as if it were an inn. At first, she wrote this man a letter politely requesting that he leave. He ignored it completely. Fed up, Madame de Saint-Belmont wrote another note, challenging this gentleman to a duel, but she signed it in her husband’s name as “Le Chevalier de Saint-Belmont.” The gentleman accepted.

The moment came, and de Saint-Belmont, dressed as a man, won by disarming her opponent. She then revealed herself, insufferably humiliating him, and told him once again to leave.[7] It’s probably safe to conclude that this time, he did not hesitate in his departure. 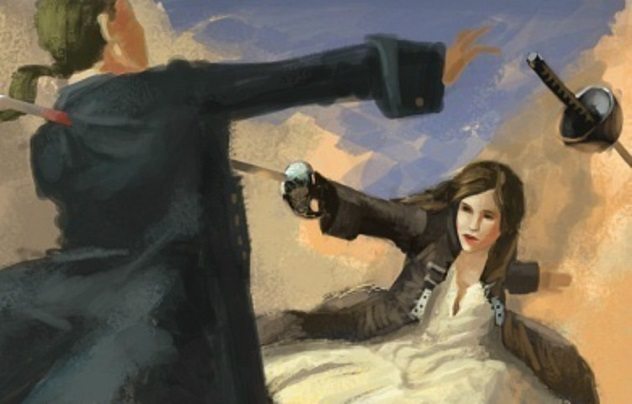 Julie d’Aubigny lived a very colorful, scandalous, independent life, to say the least. A spectacle of upper-class 17th-century France, she wore many hats: opera singer, mistress, fugitive, and swordswoman, among others.[8]

There is one particular duel that would drop the jaws of even today’s society. Once, at a ball, d’Aubigny attended dressed as man. She wasn’t there disguised as a man, like other women on this list, but rather, she confidently cross-dressed, just because she could. At this ball, a beautiful young woman caught her eye, and unabashed, d’Aubigny kissed her. Many witnessed the act, and three men, all suitors to the young woman, challenged d’Aubigny to a duel.

At midnight, the four went outside, where one after another, d’Aubigny defeated her opponents. 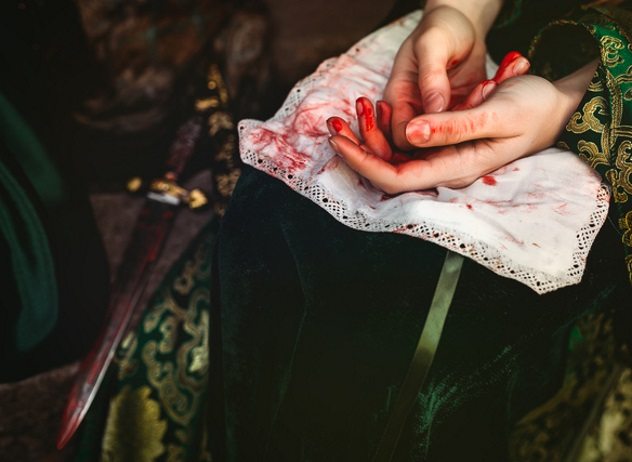 These two Parisian women of 18th-century high society had a disagreement at a party simply over who was more important. They then went outside to the garden to settle it fair and square. Their weapons of choice were neither pistol nor sword, but knives. The winner of the contest is quite unclear; both were wounded. De Guignes was wounded in the arm, and d’Aiguillon was wounded in the neck.[9]

This list, including these two dueling dames, does contain many French women dueling and wielding weapons, but it wasn’t that common of a practice, although through the 1700s and 1800s, it did occur more frequently, such as in this case. 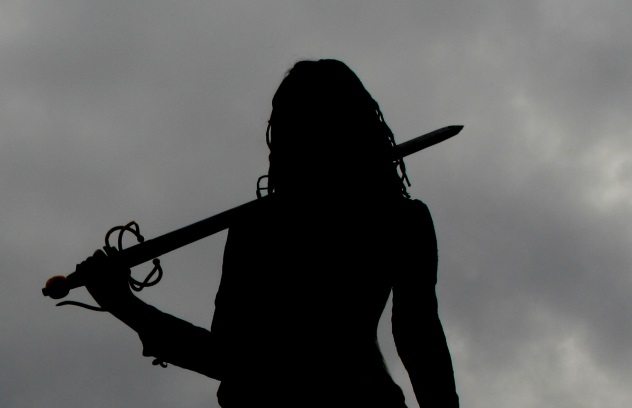 This is the most recent duel on the list, having taken place in 1900 in Mexico. Marta Duran attended a ball with Rafael Riquelme. There, Riquelme’s eye found Juana Luna, who did not discourage his attention. This led to a bitter rivalry between the Luna and Duran. The next morning, the two met with swords in hand.

Several rounds of fighting ensued. In the second round, Duran was severely wounded. By round three, she’d grown weary from blood loss, and Luna took advantage of Duran’s fatigue by wounding her sword-bearing arm. Luna, without question, was the victor, but despite all this trouble, both women gave up Riquelme and made up.

Unfortunately for Duran, her wounds were so severe that they required the attention of a surgeon, which ended up causing more trouble, as that was illegal. A surgeon cannot see a patient without government permission, and in this case, no permission was granted.[10] Needless to say, many people paid a price for this duel, and no one got what they were even fighting for.

Read about more women who took up arms on 10 Forgotten Female Warriors Who Shocked The Ancient World and 10 Women Warriors Forgotten By History.