The 1960s was one of the most memorable eras of the 20th century. It ushered in the civil rights movement, gave birth to the sexual revolution, and brought new political and social fervor in the midst of the Vietnam War and the assassination of John F. Kennedy.

The decade is also famous for the counterculture of sex, drugs, and, of course, rock and roll.

Some of the most iconic figures in the history of music rose to fame in this era. Many of these stars shared an eerie commonality in the years to follow—UFO sightings and alien encounters.

Was it genuine paranormal experience or simply a matter of psychedelic hallucination? You be the judge.

Heralded by Rolling Stone magazine as one of the “greatest guitarists of all time,” Jimi Hendrix was known for more than just his music. Hendrix had been an avid fan of all things outer space since he was a young boy. This fascination was compounded by his own UFO sighting outside his window—an incident corroborated by his brother, Leon.

References to extraterrestrials can be found throughout Hendrix’s music, most notably the song “Third Stone from the Sun.” When played at high speed, the alien-like voices in the background reveal a conversation between Hendrix and his manager talking about UFOs.[1]

Some UFO fanatics revere Hendrix as an alien himself and believe that his ghost haunts the Isle of Wight. 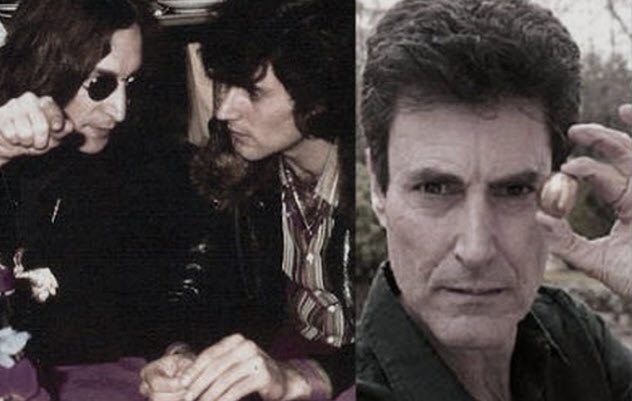 Beatles legend John Lennon was outspoken on the topic of UFOs. Lennon reportedly told magician and illusionist Uri Geller that Lennon had been visited by four aliens in his apartment in The Dakota (a well-known residence in New York) in 1973. He tried to give Geller an egg-shaped object that Lennon said the aliens had given him.[2]

There was also a recording of Lennon describing a UFO sighting from the balcony of a Manhattan building in 1974. He said that the craft hovered above the city skyline as it made its way down the East River, taking a right toward the United Nations building before returning to the river and vanishing.

Although he managed to get his camera in time, Lennon claims that the photographs did not develop properly so he could offer no proof. He was clearly moved by the experience as he inscribed “On the 23rd Aug. 1974 at 9 o’clock I saw a U.F.O.” on his Walls and Bridges album.

Now known as Yusuf Islam, Cat Stevens is beloved for his influential songwriting and philanthropy in the 1960s and ’70s. Prone to deep thinking and contemplation about life and the universe, Stevens was often heard talking about ETs and once told a reporter that he had seen a UFO and was “sucked into it.” Some people interpret his song “Longer Boats” as a retelling of this account.[3] 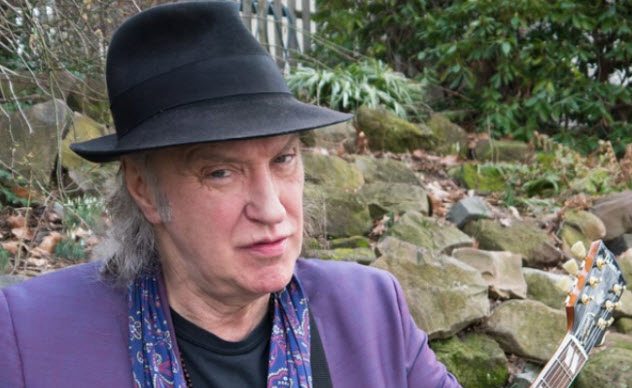 Dave Davies, guitarist of the iconic rock band The Kinks, helped set the soundtrack to the decade with hits such as “You Really Got Me” and “All Day and All of the Night.” Although he didn’t go public with it until the 1980s, Davies reports that he has had multiple encounters with UFOs and aliens in his lifetime. He even goes so far as to claim ongoing telepathic connection with these beings.[4]

Davies states that he has been ridiculed for being outspoken about his experiences but believes that he and his brother/bandmate, Ray Davies, have had psychic tendencies since childhood which predispose them to alien communication. 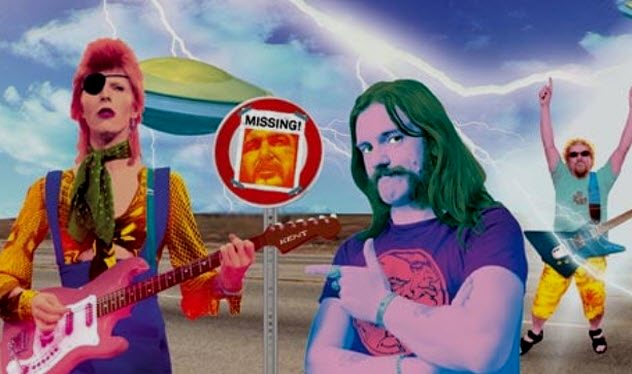 Talking about aliens and David Bowie in the same sentence seems as natural as pairing peanut butter with jelly. After all, Bowie’s alter ego is a character by the name of Ziggy Stardust.

Bowie’s obsession with outer space is evident in his music. (Take “Space Oddity” and “Life on Mars” as examples.) He even played the lead role in The Man Who Fell to Earth, a movie about a humanoid who visits Earth.

So it should not shock the reader to learn that Bowie has claimed several alien encounters in his lifetime. The bulk of his experiences occurred in 1968 when he joined a girlfriend in UFO-watching sessions.[5] These yielded six to seven sightings a night.

Unfortunately, his last homage to outer space (a sci-fi musical featuring aliens, mariachi bands, and Bob Dylan songs) was cut short by his death in 2016. 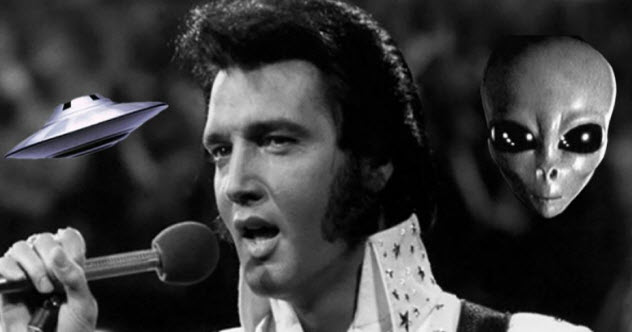 What list about the 1960s and ’70s would be complete without mention of “The King”? Elvis Presley strutted about the music world with his indelible style, undulating pelvis, and soft crooning.

But Elvis was also up to something unusual—repeated UFO sightings while traveling in the desert on tour. Presley reported to friends that these occurrences did not startle him as he had telepathic communications with aliens as a young boy (a similar tale to that of Dave Davies). One of those communications even included a vision of a “man wearing a white suit singing to a crowd.”[6] Spooky. 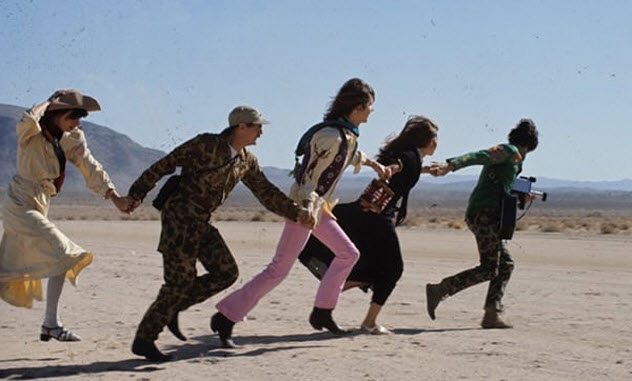 Affectionately referred to as the “Grievous Angel,” Gram Parsons was a fixture in the 1960s rock-and-roll scene. As lead of The Flying Burrito Brothers band and from time spent playing with The Byrds, Parsons was close with fellow musicians Keith Richards and Emmylou Harris. It was known that Parsons loved hanging out in Joshua Tree National Park searching for UFOs.

Parsons attended several UFO conventions and even acted in a movie called Saturation 70, a sci-fi thriller about spacecraft and aliens. Unfortunately, the film was never released and Parsons had an untimely death in 1973 at age 26.[7] 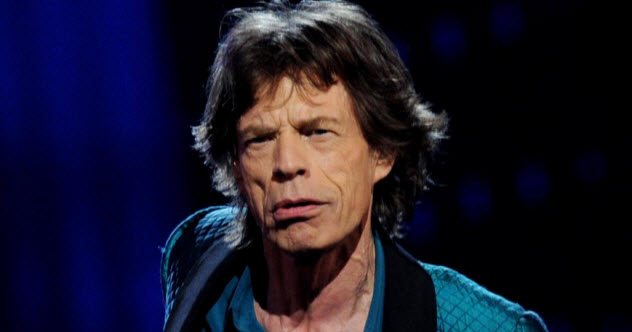 Mick Jagger might not always get what he wants, but apparently, he needs some alien encounters. Jagger first spotted a UFO in 1968 while camping with 1960s songstress Marianne Faithfull.

His second sighting occurred during the Altamont concert in 1969. The concert is infamous for the violence that erupted in the crowd and the death of four people.[8] During all the uproar, Jagger apparently saw a UFO shaped similarly to the first one he saw a year earlier.

These paranormal sightings impacted Jagger so much that he is rumored to have installed UFO detection devices in his home.

Like fellow bandmate Mick Jagger and his buddy Gram Parsons, Keith Richards has revealed that he has had UFO sightings. But Richards takes it a step further, describing closer encounters and the unique position of being landlord to a UFO airstrip (his house in West Sussex).[9]

Of aliens themselves, Richards boasts, “I’ve seen thousands of them.” But he clarifies that he has never met one. Given the public’s tendency to ridicule such testimony, he empathizes with people who have.

The Grateful Dead, the counterculture leader of the 1960s, was loved for their unique sound and the community of “Deadheads” that followed them around the country. The Dead’s vocalist and lead guitarist, Jerry Garcia, disclosed in an interview that he witnessed an alien “event” in the Marin County sky with David Freiberg of Jefferson Starship. (Band name a coincidence? We think not!)

Garcia described it as an “event” rather than a UFO because he and Freiberg didn’t see a spacecraft per se. But they did witness the sky appear as black construction paper with a hole poked through it. Garcia said that light was pouring in and out of the hole for about 15 minutes. Since he was unable to identify what he saw, Garcia felt that it met the description of an unidentified flying object (UFO).[10]

Read more about bizarre alien encounters on 10 People Who Claimed To Have Sexual Encounters With Aliens and 10 Creepy Stories Of Alleged Alien Encounters.