Medieval art is kind of weird. It’s the dirty uncle of art history. We’ll go on and on about how proud we are of the Renaissance and the Classics, but if anyone brings up the years AD 1000 to 1500, we cough and politely try to change the subject.

And that’s what makes it so great. For a period of about 500 years, artists weren’t killing themselves trying to make photo-realistic paintings or to explain how the paint they threw at the canvas somehow symbolized something other than the panic of an approaching deadline.

A lot of them were just bored monks scribbling in the margins of books to pass the time. If nothing else, that made for an art period unlike any the world has ever seen. 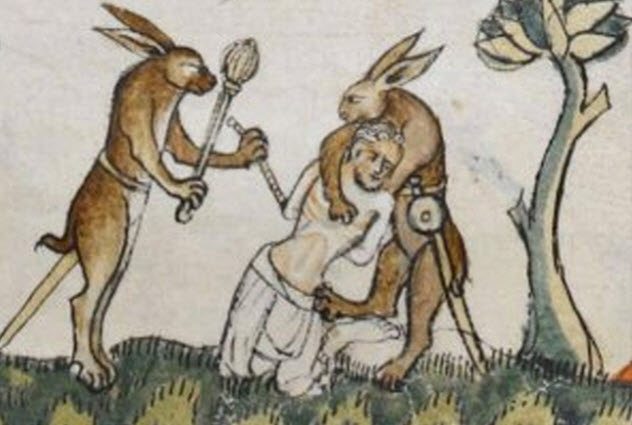 Rabbits hurting people is a weirdly common theme in medieval art, and nobody’s really sure why. There are pictures of rabbits charging into battle, mutilating knights, dragging off women, beating people with clubs, and cutting people up with axes—and they never have anything to do with the words in the books.

The theory is that they were just etched in the margins by bored monks who wanted to amuse themselves. They thought the idea of rabbits getting their revenge on the humans that hunted them was funny. So the monks would pass long, boring days scribbling pictures of the rabbits’ inevitable uprising.[1]

But that’s just a theory. Only one medieval monk ever commented on it, and as far as he was concerned, his fellow monks were just wasting time and ink. “Good Lord,” he wrote. “Even if the foolishness of it all occasions no shame, at least one might balk at the expense.” 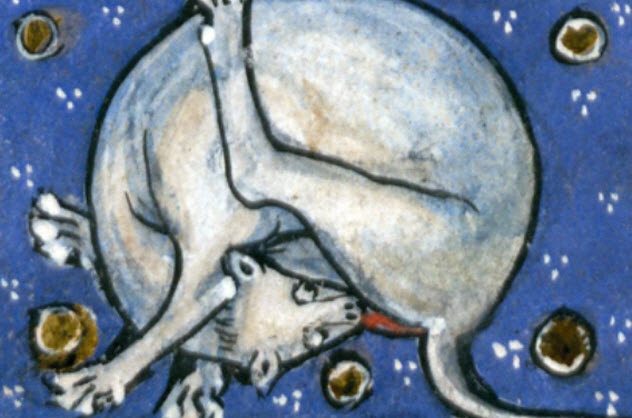 Cat pictures have been around for a lot longer than the Internet. Medieval artists drew tons of pictures of cute, cuddly felines just like we do today. Except they didn’t really focus on the cute, cuddly part as much. Instead, they believed that there was only one moment worthy enough to be immortalized in a work of art: the moment when a cat leans over and licks its own anus.

The medieval era left us a strangely voluminous collection of pictures of cats licking their own butts. Sometimes, they’d be realistic. But more often than not, they’d have bent themselves into a full circle just to make sure they’d really get their tongues right in there.[2]

People made paintings of them, sketched them in their free time, and even sketched them in pictures of Jesus Christ. One monk even painted such an image into an illustrated copy of the Bible, spicing up the moment when Christ returned from the grave by adding a bored cat looking on, licking its own butthole. 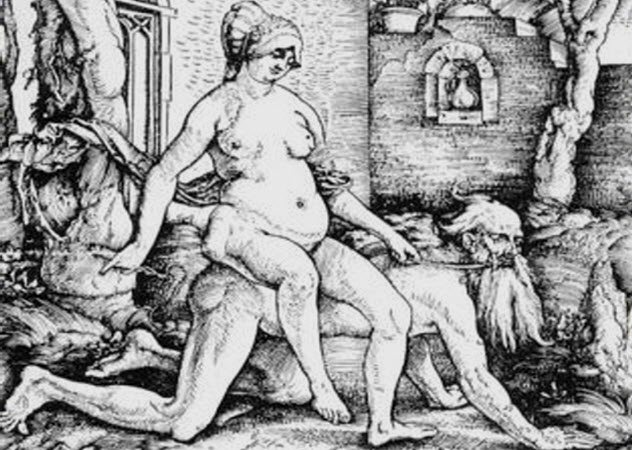 The Greek philosopher Aristotle shows up in his fair share of paintings. But for a short period that stretched into the beginning of the Renaissance, people got really into drawing him in one weirdly specific pose. For a few years, artists were churning out picture after picture of one of history’s most respected philosophers on his knees with a woman riding him like a pony.

Sometimes, Aristotle would have a bridle in his mouth. Sometimes, the woman would be whipping him. And sometimes, it’d be a full-blown, explicit picture of a naked woman spanking the father of scientific thought.

It wasn’t that the world was overcome with a weird fetish for Greek thinkers. The pictures were taken from a popular story about Alexander the Great’s wife tricking Aristotle into letting her ride him like a pony. Apparently, this was how medieval history teachers had to spice up their stories to keep kids interested.

The moral of the story was that women were evil seductresses and we all need to abstain from the needs of the flesh. And so medieval artists would show the world that they were above lust by painting pictures of a naked lady whipping a guy while she rode him like a horse.[3] 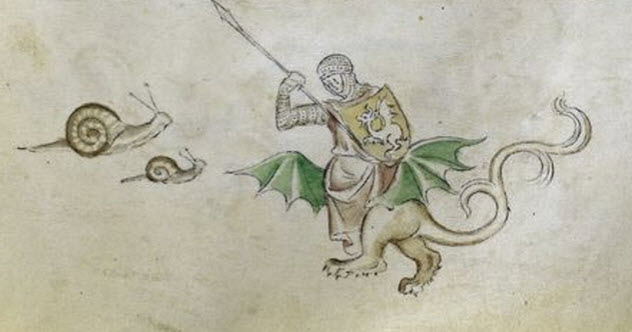 One of the weirdest things monks loved to etch into the margins of the books they made were the epic battles between knights and snails.

Between the 13th and 14th centuries, pictures of knights in full armor valiantly charging into battle against snails became weirdly common. “You get these all the time in the margins of Gothic manuscripts,” one scholar has said. “And I do mean all the time. They’re everywhere!”

Nobody really knows why, but there are enough epic pictures of man-on-snail combat that art historians have felt the need to try to figure it out.[4] They’ve floated just about every idea you can imagine. Some think it’s an allegory for social struggles, discrimination, or man’s desperate struggle against inevitable death—and all that’s very well and nice.

But there might be an easier explanation: Being a 14th-century monk was boring as hell. If you had to spend your days copying out the entire Bible by hand, you’d probably start doodling some pretty strange stuff, too.

6 Moses With Horns On His Head 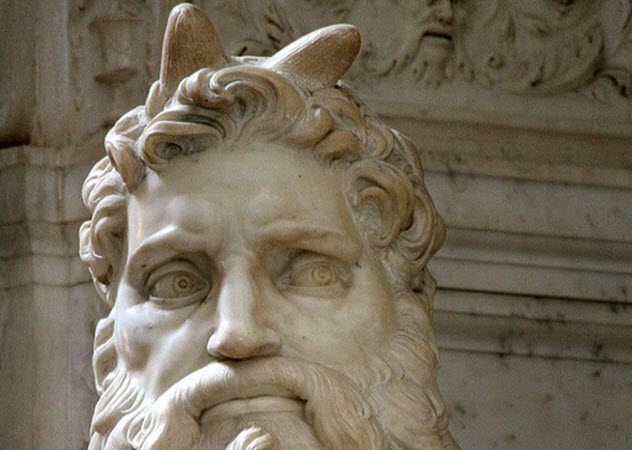 For a long time, people had a weird habit of drawing pictures of Moses with horns sprouting out of his head. It’s a strangely demonic-looking detail to put on the man who led the Jews out of Egypt. And yet, for a while, that was pretty much the only way people would draw him. Even Michelangelo did it.

It wasn’t that people wanted to make Moses look bad or anything. They actually thought he had horns. Most Bibles say that when Moses came down from Mount Sinai with the Ten Commandments, his face was “shining.” But the original Hebrew word keren can mean either “ray of light” or “horn.” So the Bible actually might be saying that Moses had horns sticking out of his face.[5] 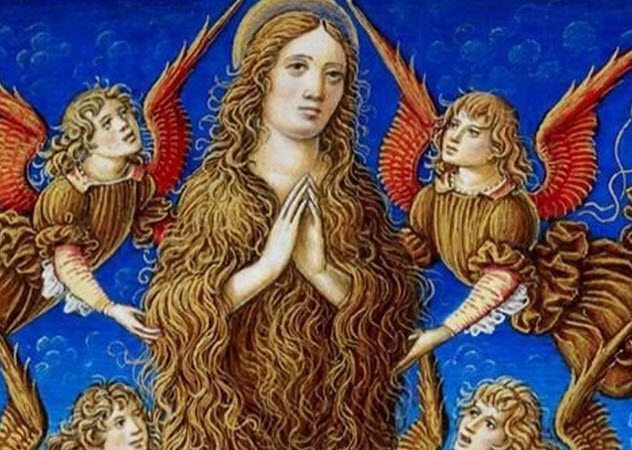 When Gothic artists drew Mary Magdalene, they made her look like P.T. Barnum’s star attraction. From the neck down, their version of Mary looked like she spent every night bathing in Rogaine.

They’d draw the woman who loved Jesus covered in body hair. It wasn’t some weird medieval fetish—it was just what they thought she was supposed to look like. Back then, the story of Mary Magdalene ended with her growing a full chest of woolly hair that made her look like a goat.

According to a legend, Mary Magdalene completely gave up on all Earthly concerns after Jesus died. She stopped bathing and changing her clothes, and eventually, her robes became so tattered and ruined that they fell off.[6]

As a miracle to save Mary from wandering the world naked, hair sprouted all over her body. For the rest of her life, Mary roamed around looking like a naked truck driver. And that, Gothic artists believed, was a picture beautiful enough to be captured in a painting. 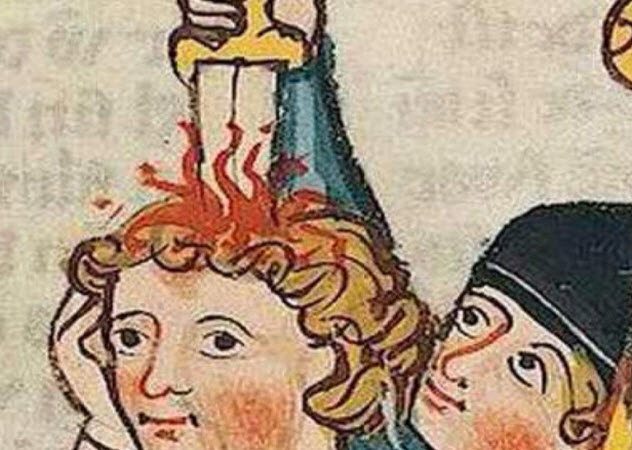 A lot of medieval art was violent. But no matter how horrible someone’s death was, he always looked bored. There are paintings of people being run through by cavalry charge, getting knives in their skulls, or having an axe in every part of each limb. Yet, in every picture, the victim looks like he’s struggling to hold back a yawn.

The theory is that this all ties into the medieval concept of Ars moriendi—the art of dying well.[7] Death, they believed, was a moral test. It was a time when you faced divine judgment, and the way you reacted to that said something about your character.

That’s the theory anyway. Certainly, a lot of medieval paintings show demons trying to tempt the dying to cling to Earthly things by showing them wine, gold, and loose women. All these bored dead people might just be showing their stoic willingness to pass into the bliss of Heaven.

Either that or medieval artists were just really bad at drawing facial expressions. 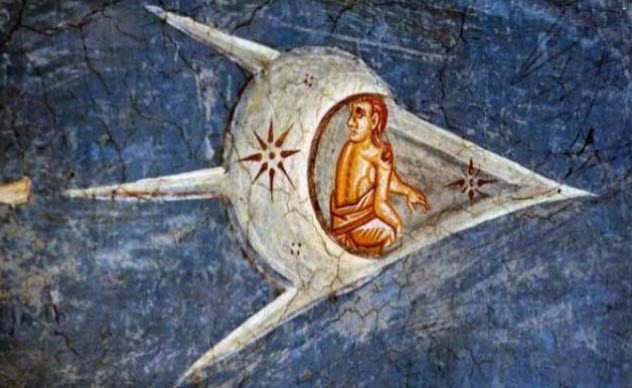 For some reason, a lot of medieval art shows people flying around in little machines that look strangely similar to Sputnik.

It’s something that usually shows up in pictures of Jesus. Medieval paintings will show major moments in the life of Christ, like the moment when his mother, Mary, held him in her arms for the first time or the moment that he faced his death on the cross. And then, up in the corner in the sky, a little man in the cockpit of a little white rocket will be blasting his way through space.

There a few theories as to what these pictures might be, most of which were spread by tall-haired men on the History Channel. But the more academic theory is that the images are meant to symbolize the “alien presence of God.”[8]

That’s just a theory, though, and the only explanation we have from a medieval artist himself doesn’t support it. A woodcut by Hans Glaser shows the sky filled with tubes and orbs. Glaser has gone on the record saying that it’s a picture of something he insists he saw happening in the sky over Nuremberg: a battle between alien flying saucers.

So, as it turns out, sometimes the answer really is “ancient aliens.”

2 Demons With Faces On Their Crotches 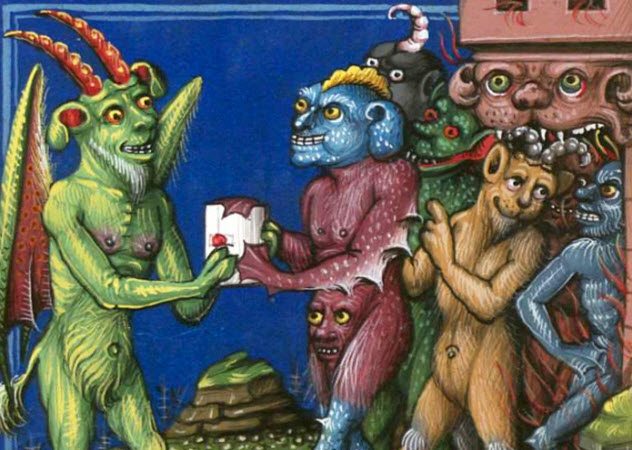 Medieval artists loved to draw demons. They filled their art with terrifying monsters that were out to take the souls of the innocent. And, for some reason, a lot of them had two eyes, a nose, and a big mouth right there on their crotches.

These pictures were weirdly sexual. Often, the demon’s crotch face would be spewing out some oddly phallic-looking fire right from between their legs. And sometimes, the faces wouldn’t just cover up the demons’ crotches—they’d be there on the tips of their genitals.[9]

It was all a way of showing the evils of wanton sexual temptation. The demons were meant to symbolize the dangers of lust, and the faces on their crotches were a way of showing where evil’s true face hid.

1 Things Sticking Out Of People’s Butts 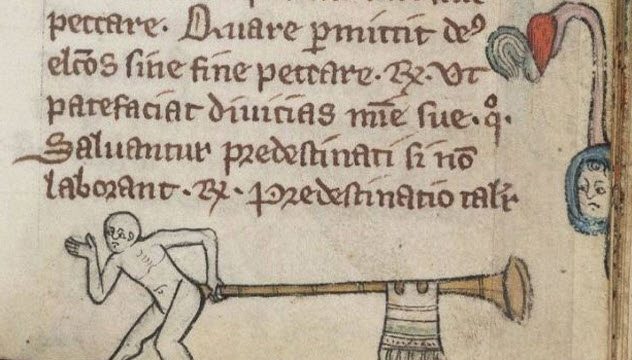 When they weren’t drawing murderous animals and crotch demons, medieval monks filled their illustrated holy books with a subject truly worthy of standing beside the word of God: pictures of people with things in their butts.

Usually, it was a trumpet.[10] A lot of great medieval art created by holy men shows naked men sticking half of a brass section into their butts, passing down through illustration the age-old wisdom of how one may play the tuba with their farts.

However, there are variations. Some pages were filled with beautiful patterns of flowers and leaves, all growing out of the bare behind of a man leaning down and mooning the reader. And still more showed men shooting arrows into the round red targets of one another’s buttocks.

For all that art historians have tried to explain snails as symbolism and rabbits as social commentary, there are only so many ways you can find a deeper meaning in this one. Yes, sometimes art is full of coded symbolism. But when somebody draws a guy with a trumpet in his butt, it can only be for one reason. For all our culture may have changed, fart jokes remain eternal.

Read about more bizarre artistic styles on 10 Of The Most Bizarre Forms Of Modern Art and 10 Curious Sources Of Artistic Styles.