What causes a painting to be left unfinished? Did the artist run out of inspiration? Did their commission money dry up? Did they get bored, frustrated, or disenchanted? Did the artist or their subject die before completion? Behind every picture lies a story, and that is especially true of incomplete works. This list looks at ten unfinished paintings and the intriguing, surprising, and poignant reasons why.

10 The Adoration Of The Magi
Leonardo Da Vinci 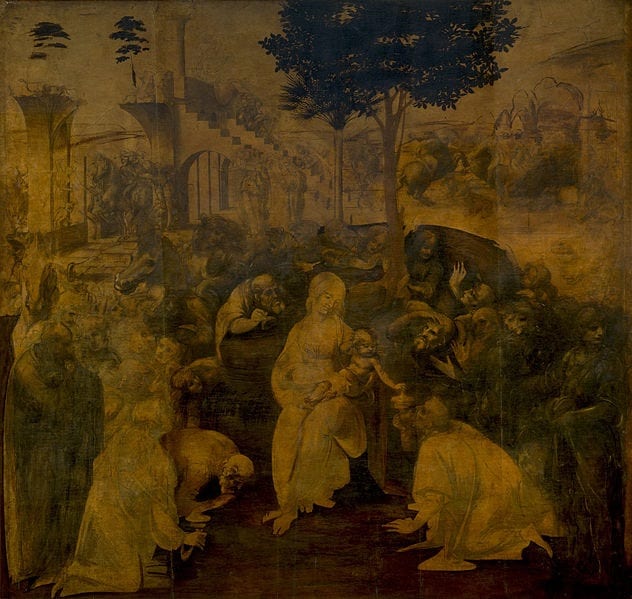 Leonardo da Vinci was the embodiment of the statement, “Quality takes time.” He was notoriously slow to finish any work because his vast array of talents kept sidetracking him into other avenues such as engineering, science, and mathematics.

By 1481, da Vinci was living in Florence and had been commissioned by Augustinian monks to paint The Adoration of the Magi, depicting the Three Wise Men’s arrival to meet Jesus. Within a year, Da Vinci had created an initial life-size draft, which was over 2.1 meters (7 ft) squared and portrayed the under-paint tones.

However, shattering the notion of a renaissance man working on his vocation, da Vinci chased the money. In 1482, he left to win favor with the wealthy future duke of Milan, Ludovico il Moro.[1] It was worth the gamble, as it was in Milan that he was commissioned to paint The Last Supper. Da Vinci completed only six paintings in the 17 years he was in Milan, and The Adoration of the Magi was recommissioned and repainted by Filippino Lippi. Both versions still stand today at Uffizi gallery in Florence. 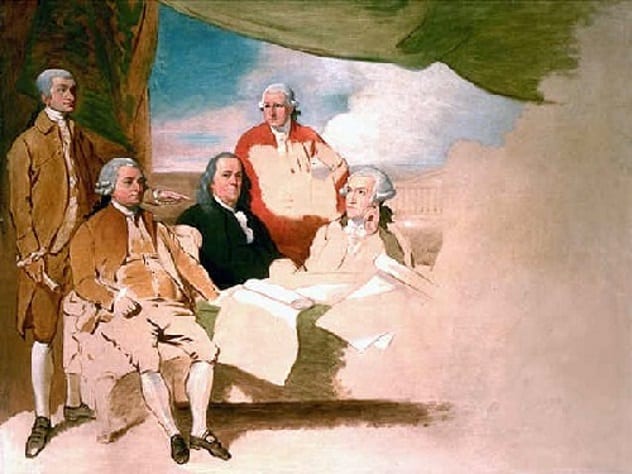 By the end of the American Revolution, all parties involved were understandably looking for the best terms of agreement, so a US delegation including John Adams and Benjamin Franklin headed to Paris to begin talks with the French, Spanish, Dutch, and British in 1783. The talks were a huge success for the Americans, as they validated the independence of the original 13 states as well as fishing rights and the release of prisoners of war by the British.[2] To celebrate, famed historical artist Benjamin West was appointed to paint a picture depicting the occasion.

There was just one hitch: The British delegates refused to be painted, as they felt their defeat was shameful. As a result, the picture has a gaping blank space where they would have been. Unfortunately, throwing their toys out of the pram didn’t work, and the half-finished painting still exists in the library at Adams National Historical Park in Massachusetts.

Self-taught and nearly illiterate, Benjamin West’s paintings bought him fame and fortune from both sides of the Atlantic, and he was even elected president of the Royal Academy twice in the United Kingdom. He is buried at St Paul’s Cathedral in London. 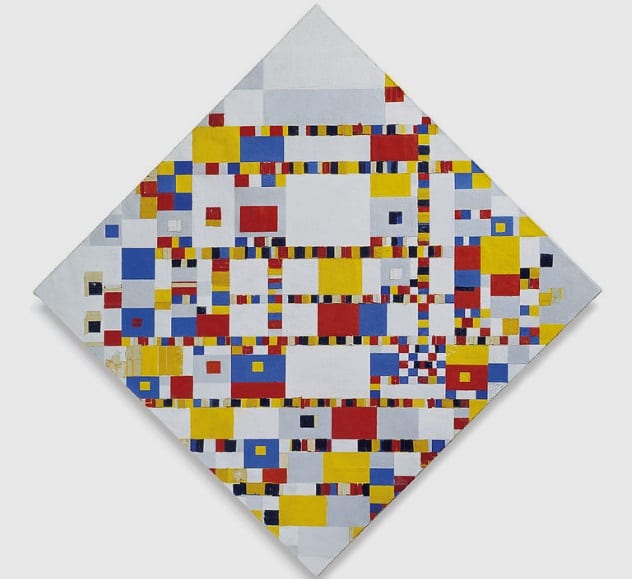 Dutch artist Piet Mondrian’s abstract works are known throughout the world for the way that they convey city layouts in the most basic elemental colors and shapes.

Reflecting the musical influences and energy of New York, Victory Boogie Woogie was never finished due to Mondrian’s unfortunate death from pneumonia in 1944.[3] Looking closely at the picture, we can see that the bolder, simpler lines have been replaced with smaller, more vibrant squares of sticky tape as the painting developed. Alongside the musical influences, the name Victory Boogie Woogie also represents Mondrian’s enthusiasm and belief that the US and the Allies would help win World War II.

Housed at the Gemeentemuseum in the Netherlands, the sale of the painting for $40 million in 1998 caused controversy when it transpired that the money had been donated by the Dutch Central Bank, raising questions about whether it was truly worth $40 million. 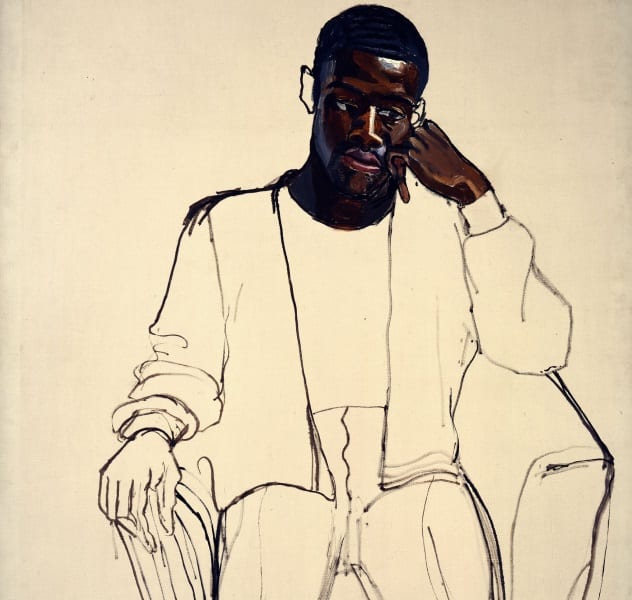 American portrait artist Alice Neel’s oil painting James Hunter Black Draftee is a great example of how a painting can be finished yet incomplete. Despite not finishing the work physically, Neel decided that its incomplete nature actually conveyed the emotions she wanted, so she put her signature on it and displayed it in the Witney Museum. The story behind why the painting is incomplete is a poignant one.

Unappreciated for most of her career, Neel would often invite strangers to sit for a portrait. In 1965, she invited James Hunter, who had just found out that he had been drafted for service in the Vietnam War. The first sitting captured his melancholy and contemplative look. Neel finished most of his face and drew the outline of the rest of his body.

Hunter never turned up for the second sitting. Mysteriously, his name never appeared on the list of soldiers at the Vietnam Veterans Memorial, so we can assume that unless he used a pseudonym, he didn’t die in Vietnam. However, his whereabouts remain unknown to this day.[4]

6 Madonna With The Long Neck
Parmigianino 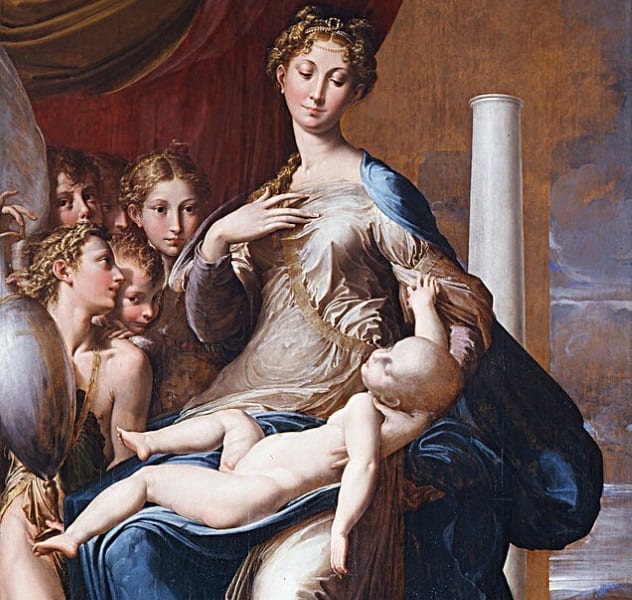 Girolamo Francesco Maria Mazzola (also known as Parmigianino due to his birth in Parma) was an Italian Renaissance painter who painted in the Mannerism style of exaggerated and elongated proportions to suggest beauty and grace. Commissioned to paint a picture of Mary and Jesus for a funeral chapel, Parmigianino spent several years tinkering on Madonna with the Long Neck before dying of a fever in 1540.

A renowned perfectionist, Parmigianino is perhaps a classic example of not knowing when to stop. Despite several drafts and stagings, he never quite achieved what he wanted, and the tampering has led to several noticeably incomplete areas.[5] Not only are the column and sky unfinished, but the figure of Saint Jerome in the bottom right corner has a floating foot next to him. 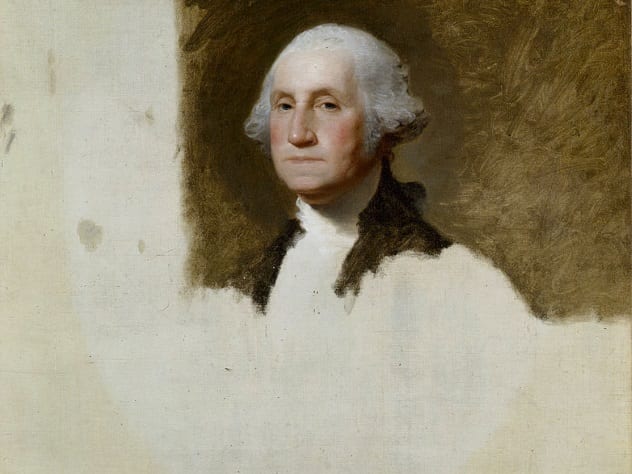 One of the most regarded portrait artists of his day, Gilbert Stuart painted over 1,000 people, including US presidents and kings and queens across Europe. His most famous artwork, however, is a deliberately incomplete painting of George Washington.

After Stuart’s initial painting of George Washington in 1795 was a success, George’s wife Martha asked Stuart to create another picture of him in 1796.[6] Stuart did not finish this second portrait (referred to as the Athenaeum Portrait) and instead stopped after painting the face and part of the background. A shrewd businessman, he used this likeness to replicate dozens of copies that sold for $100 each. It is this image that is used on the $1 bill.

Allegedly, Washington was a difficult person to paint. Stuart initially found it difficult to generate the likeness he wanted due do Washington’s reserved nature. Also, Washington’s new dentures caused his jawline to protrude, distorting his face—not surprising since they were made up of metal, ivory, and cow and human teeth. 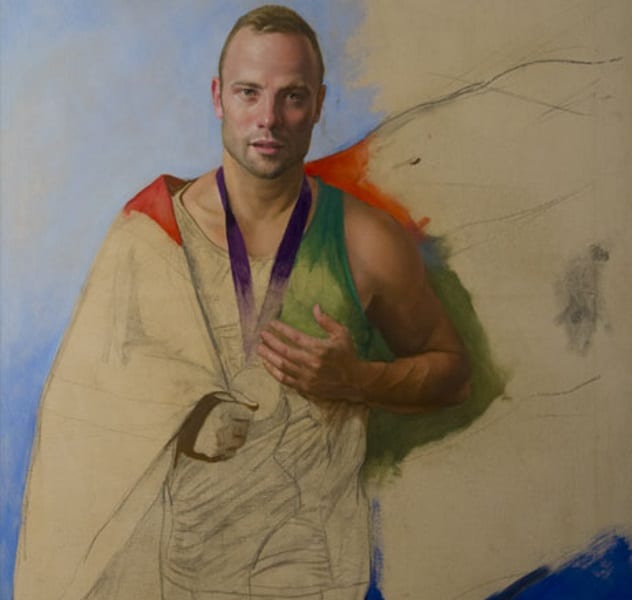 Also known as the “Blade Runner,” Oscar Pistorius was seen as a hero to many, as he defied his disabilities (having been born without a fibula bone in both legs) to win six gold medals at the Paralympics. Such was his dominance compared to the other Paralympians that he even competed in the 400m at the 2012 summer Olympics—the first double-leg amputee to do so.

To celebrate the event, Russian-born artist Natalie Holland was commissioned to paint several portraits of Pistorius. It is the third portrait, the one in which she desired to show him in victory, that remains unfinished.

After Holland had completed his face and arms,[7] news spread that Pistorius had shot and killed his girlfriend, Reeva Steenkamp. Unable to bring herself to complete the picture, it remains frozen in time. Oscar Pistorius was originally charged with culpable homicide, but on appeal, he was convicted of murder and given a sentence of six years. 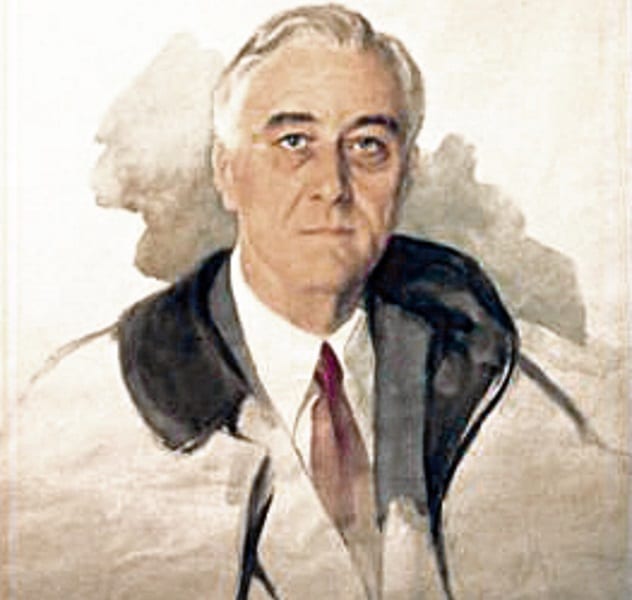 Elizabeth Shoumatoff didn’t want to paint Franklin D. Roosevelt at first. It was something that she “neither wished for nor planned,”[8] but by doing so, she managed to become a small part of history.

Not happy with her first attempt at painting FDR in 1943, Shoumatoff came back for another try to capture his energy and dynamism toward the end of World War II. She had heard that Roosevelt was in ill health, but he insisted on being painted. He was in good spirits during the week, mimicking Winston Churchill and commenting that he believed Joseph Stalin had poisoned his wife. Unfortunately, while Shoumatoff was painting, Roosevelt complained of a headache and then slumped forward, unconscious. He had suffered a stroke and died later that day. In the room at the time with Shoumatoff was Lucy Mercer Rutherford, FDR’s former mistress, who had arranged the commission.

Shoumatoff did complete a nearly identical replica of Roosevelt. Selling a photograph of the original to the New York Daily News for $25,000, she later donated the incomplete work to the Little White House, FDR’s Georgia retreat where he died. 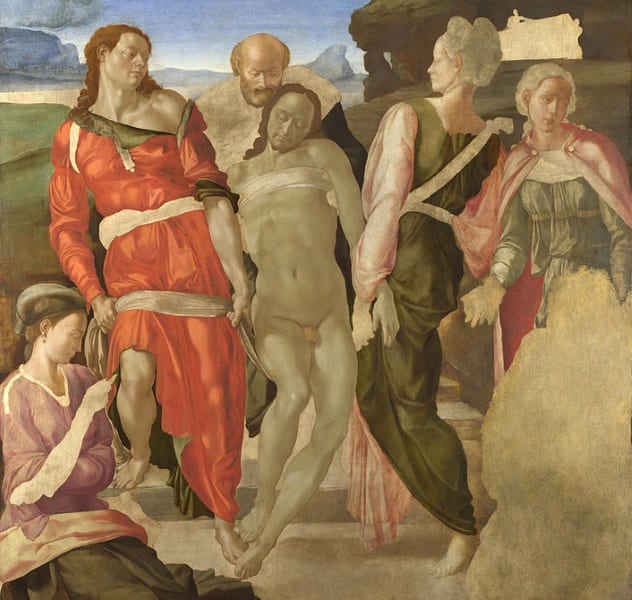 The Entombment is an unfinished piece depicting Jesus’s body being placed inside His tomb after the crucifixion. The painting is shrouded in mystery. There is no signature on the piece, several figures are missing, and the painting itself was lost for centuries. Part of the evidence that suggests this work is Michelangelo’s is that he was commissioned by the Saint Agostino church in Rome to paint a panel for their altar but later sent back the money he was given. Unfortunately, there is no record of what the church asked him to paint, nor does Michelangelo refer to this painting in any notes.

Why did Michelangelo leave an unfinished piece? It is certain that he left Rome for Florence around the time that the painting was abandoned. One story that has endured is that his friends managed to obtain a large piece of marble from the cathedral in Florence. He was then commissioned by them to create a sculpture—the statue of David.

The Entombment slipped into obscurity until 1846, when Scottish photographer and painter Robert Macpherson was looking through a job lot of paintings intended to be destroyed. The wood from The Entombment was going to be used to make a table until Macpherson bought it for £1. In 1868, he sold it to the National Gallery for £2,000.[9] Next time you come across a pile of discarded paintings about to be thrown out, you never know: There might just be a Michelangelo. 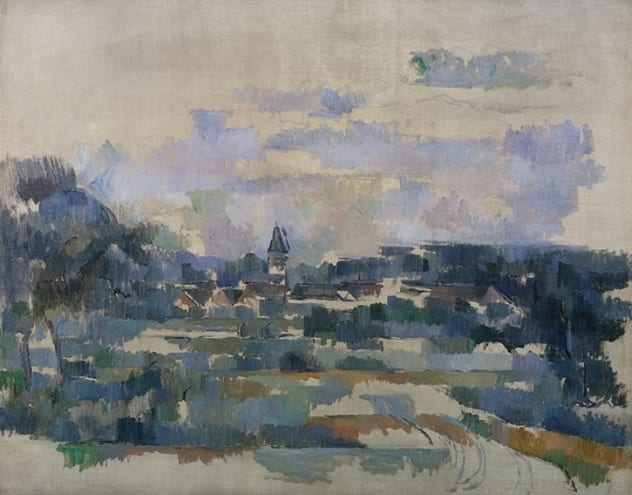 The last artist on this list is Paul Cezanne, a painter whose later works often asked the question, “When is a painting truly finished?” Cezanne feared that a single wrong brushstroke would ruin the whole piece, so much of his work followed a “less is more” impressionist style.

His later pieces such as Turning Road left whole sections of the canvas bare, emphasizing the paint that was left. Some believe that this was unintentional and that his poor eyesight led him to miss parts of the picture.[10] Whatever the reason, finished or unfinished, artwork truly is in the eye of the beholder.

I used to be an editor; now I just write for fun!