Women throwing underwear and screaming doesn’t come to most people’s minds when they think about classical music concerts, but that’s where it began. Long before Elvis, Beatlemania, and Justin Bieber, one man became the first person to fill concert halls with shrieking, fainting, lovelorn women: classical pianist Franz Liszt.

They called it Lisztomania—and in the 19th century, that wasn’t just a cute name. Women went so crazy when Franz Liszt’s fingers touched a piano that doctors seriously believed that his fandom was a mental illness epidemic.

10 Women Threw Their Underwear At Him 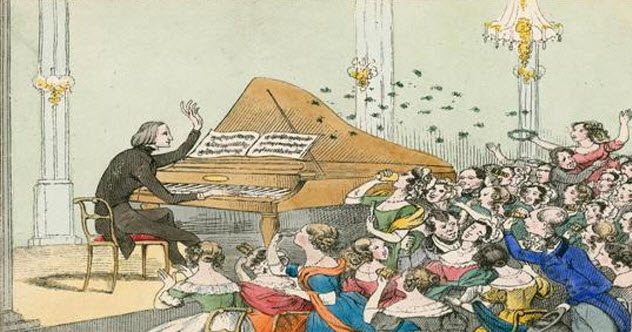 Franz Liszt was a sex symbol the likes of which the world had never seen. Until then, classical musicians had considered an audience out of control if they applauded for a little too long. But once Liszt took the stage, people started throwing their underwear on the stage.[1]

Not every woman brought a pair of unmentionables to hurl at their favorite Hungarian pianist, of course. Some were a bit more modest. Those with a little more self-control would simply throw handkerchiefs, bouquets of roses, or a few torn-off articles of clothing. Or else they’d politely sit in the front row a few inches away from him, peering at him through binoculars so that they could make out every pore on his face.

Others simply couldn’t muster up the strength to throw anything. During one chaotic show in Berlin in 1842, several women burst into uncontrollable, hysterical laughter at the sheer sight of Franz Liszt while others simply passed out. Those women missed out, though, because toward the end of that show, the girls who could still stand made history. For what might well be the first time in history, the audience bum-rushed the stage.

9 People Made Lockets From His Used Cigarettes 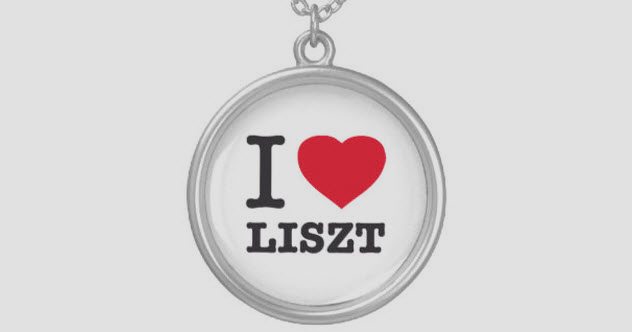 When a Franz Liszt concert was over, the riots began. Women would swarm onto the stage and try to steal any keepsakes they could find. They would fight over his handkerchiefs or, if they were feeling more charitable, tear his velvet gloves to shreds so that every girl there could take a little piece of Liszt home.

Some came prepared. There are reports of women bringing glass vials to Liszt’s shows so that they could pour the dregs from his coffee cup into the vials when he was done playing. Then they would be able to carry something that had touched his lips around their neck wherever they went.

One writer described seeing a woman grab Liszt’s used cigar stump out of the gutter.[2] She didn’t just take it home. She had it encased in a locket with the initials “F. L.” written on it in diamonds. The locket reeked, of course. But she wore it everywhere she went.

8 The Men Loved Him, Too 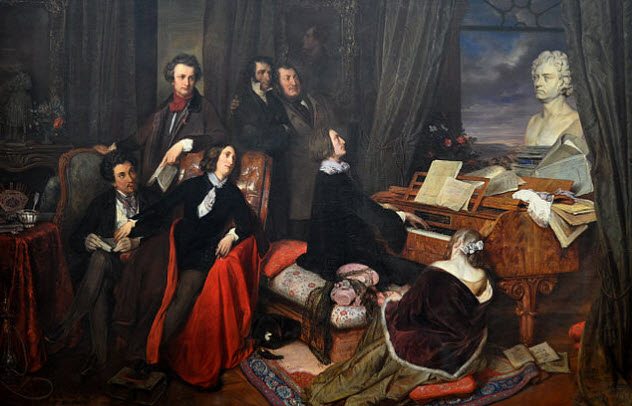 It wasn’t just women who went crazy for Franz Liszt. Men loved him, too—so much so that they wrote long, enamored descriptions of just how handsome he was. After seeing Liszt in person, Russian critic Yuri Arnold wrote: “As soon as I reached home, I pulled off my coat, flung myself on the sofa, and wept the bitterest, sweetest tears.”[3]

He wasn’t alone. After seeing Liszt, two friends named Stasov and Serov wrote that they “took a vow that thenceforth and forever, that day, 8 April 1842, would be sacred to us, and we would never forget a single second of it till our dying day.”

When Hans Christian Andersen wasn’t busy writing “The Little Mermaid,” even he would spend his time trying to capture Liszt’s charm in words. “When Liszt entered the saloon, it was as if an electric shock passed through it,” he wrote in his diary after seeing Liszt for the first time. “It was as if a ray of sunlight passed over every face.”

7 People Lost The Power Of Speech Around Him 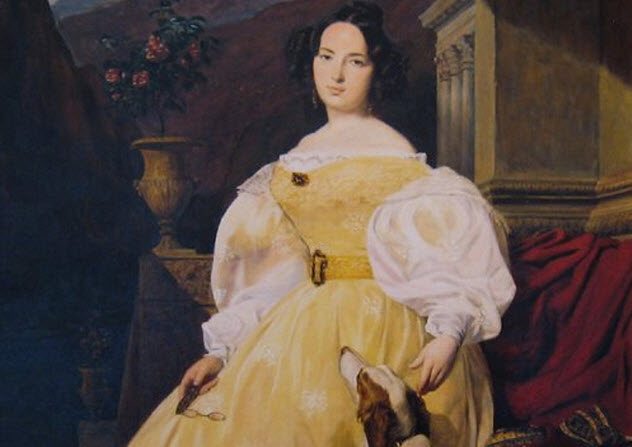 Franz Liszt could steal your girl. It didn’t matter who you were. Even if you were famous French novelist Honore de Balzac, Liszt would just have to see your wife once and she’d be writing poetry about his looks.

Which is exactly what happened to poor Balzac. When he invited Liszt over to his house, Balzac’s mistress and future wife, Eva Hanska, went crazy. She was so excited about meeting Liszt that she couldn’t even speak. But when he left, she climbed into bed and fawned about him in her diary.

“His eyes are glassy, but they light up under the effect of his wit and sparkle like the facets of a cut diamond,” Hanska wrote, presumably while Balzac wasn’t looking. She fawned about every part of him—his hair, his body, and his mouth, which she wrote “makes heaven dream.”[4] 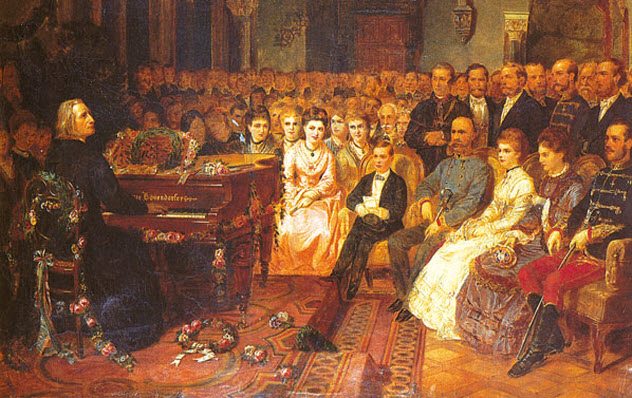 Liszt didn’t just have celebrities fawning after him. He even made royalty go crazy for him. As one critic put it, Franz was treated “not like a king, but as a king,” even by other actual kings.

It wasn’t an exaggeration. When he left Germany to tour Europe, the king and queen climbed out to the balcony to wave goodbye as he left. They set up a whole procession to send him off, with Liszt placed in a royal carriage led by six white horses and followed by a procession of 30 coaches and the royal honor guard.[5]

When Liszt didn’t get that kind of respect from royalty, he demanded it. When he played for Tsar Nicholas I in Russia, Liszt got frustrated that the tsar was talking during his concert. So he refused to play. He glared at the tsar and barked in a record-setting display of passive-aggressiveness: “Music herself should be silent when Nicholas speaks!” 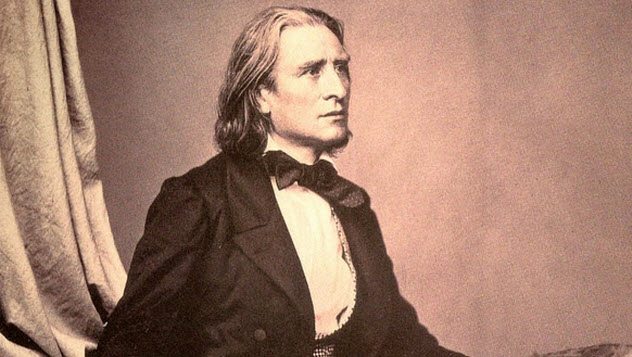 Part of what made Liszt so popular was his dashing, rebelliously long hair. Nobody had ever seen anything like it, and some of them became obsessed. Women would send letter after letter begging Liszt to send them locks of his flowing mane so that they could press it into their diaries or keep it in lockets and have him with them always.

Eventually, it got to be a bit much. Not wanting to disappoint his fans, Liszt bought a dog with his color of hair and clipped it every time he got a letter. The women who wrote him would receive a lock of dog hair and would usually be happy to have it.[6]

They never stopped asking, even when he died. The woman who found Liszt’s body let his daughter know that her father had died, but the woman only gave Liszt’s daughter a moment to mourn. Then, hoping it wasn’t a bad time, the woman asked for permission to cut a lock of hair from his dead body.

4 A Woman Destroyed A Hotel Because He Left Her 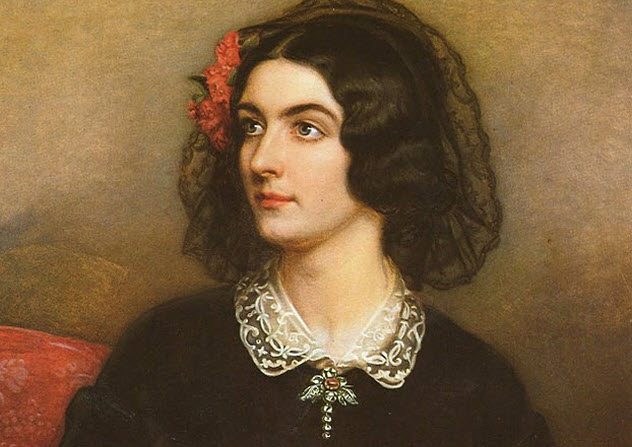 Somewhere in that string of lovers, she found time for Franz Liszt. But Liszt, it seems, wasn’t as attached as she was. After sleeping with Lola Montez in a hotel room, he sneaked out during the night.[7]

Montez was not happy. In a fury, she destroyed the room, breaking every piece of furniture she could before storming out and leaving the place in ruins. Liszt, though, had apparently known the effect he could have. Before he’d left, he’d already handed the hotel owners a wad of cash. In a few minutes, he warned them, that hotel room was about to be in ruins. 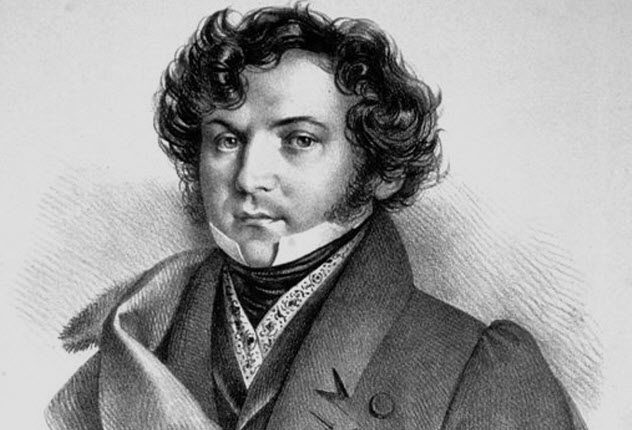 When the singer Giovanni Battista Rubini went on tour with Liszt, Signor Belloni, Liszt’s manager, was worried about how Rubini would handle it. He’d be sharing the spotlight with Franz Liszt, ladies’ man extraordinaire, and Belloni was afraid that Rubini would get his feelings hurt.

Belloni was nothing if not proactive. To make sure that Rubini felt as loved as Liszt, Belloni paid people to go into the audience and throw flowers at Rubini during his performances. Belloni even paid poets to write odes to Rubini and belt them out in front of the crowd in the middle of the shows.

Rubini loved the attention—until the tour ended and Belloni sent him the bill. Belloni was willing to shelter Rubini’s self-esteem for a while, but he wasn’t willing to pay for it. Rubini got a list of expenses that included flower throwers, poets, and the hard realization that he wasn’t as loved as he’d thought.[8] 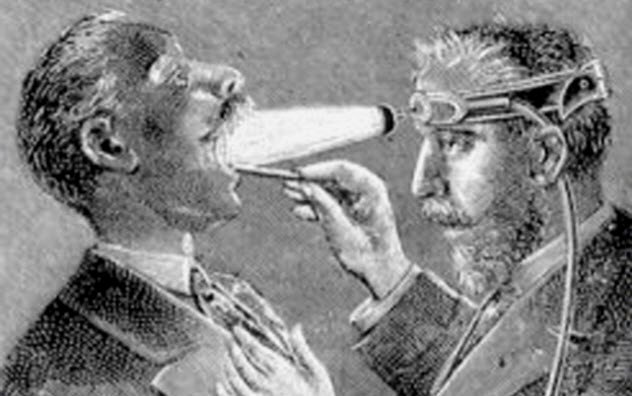 Franz Liszt wasn’t just popular—he was a social problem. During his time, people wrote essays about the way he was affecting people and they didn’t just treat it as fandom. Heinrich Heine, who coined the term “Lisztomania,” referred to the problem as “veritable insanity” and said that it was in “the domain of pathology.” Or, to put it simply: These people are crazy.

Doctors wrote essays trying to explain it, with some blaming Lisztomania on a germ that was spreading in the concert halls or on some sort of mass epileptic attack. Some even wrote articles about how to “immunize” the public against it.

Nobody ever came up with a cure, though. For the most part, they were probably just terrified. They were a bit worried about how he was shaking things up, especially with the women.[9]

That became painfully clear when one paper, called the Neuigkeits-Bote, published article after article warning people about the “contagion” of Lisztomania. Finally, they wrote an article celebrating Liszt leaving town. “The women,” they said, “are once again taking care of children, kitchen, and husband.”

Academics haven’t changed that much. Today, scientists (and possibly cartoonists) still study how Franz Liszt managed to drive people so crazy. Some of their theories are a bit outlandish. For example, one researcher said that Liszt’s fast tempos may have had an electric neurological effect on the audience’s brains that shut down their ability to reason.

That’s almost certainly nonsense, but it hasn’t stopped people from looking into it. Other studies have suggested that Lisztomania revealed how big of a role music plays in the human sex drive. Some have said that it might prove that we aren’t that different from birds, singing songs to attract a mate.

It actually makes a bit of sense, too. “If you can take care of yourself and learn a skill like music,” one psychologist explained, “then you can likely take care of a mate.” Liszt was a talented piano player with a well-groomed head of hair. So, basically, he was a peacock on full display.[10]

As the theory goes, he made women faint because he was just too darn perfect. People didn’t know how to deal with it, so their nervous systems would jump from being overexcited to trying to calm down too quickly. That sudden break would end in women passed out on the floor.