When we think of inflatables, most of us probably envision balloons, toys, and bounce houses. Although these are certainly popular, they’re not the only kind of inflatables, some of which are used for more than entertainment. Various inflated devices and objects see use in militaries and the arts and even as wedding venues.

Subways in New York City may use inflatables, as may river channels in Los Angeles. There’s even an inflatable in orbit, miles above the Earth. Each of the ten incredible inflatables on this list will make you think twice about what they are and to what uses they can be put. 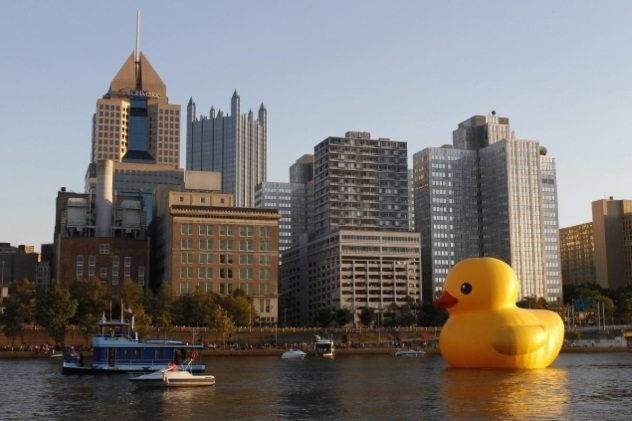 In June 2013, the world’s biggest rubber duck visited Hong Kong on its goodwill tour. Dutch artist Florentijn Hofman’s 16-meter-tall (54 ft) creation also surprised residents at a lake in Tianjin, where it dwarfed most maritime vessels. Since 2007, the giant yellow duck has paid calls to ten countries and 12 cities. The next stop after China was Pittsburgh, Pennsylvania.

In Pittsburgh, the duck shrank to a height of 12 meters (40 ft). In its various incarnations, its size may differ, because each location constructs its own duck using Hofman’s plans. It takes a team of workers and equipment to create and operate the duck, including huge pontoons and workers set up the inflatable waterfowl. In Pittsburgh, the Coast Guard and the US Army Corps of Engineers had to be alerted, since the duck’s presence would impact shipping in the Ohio River, one of the country’s busiest commercial waterways. Many large barges navigate it.

A year later, a six-story-tall version of the duck arrived in the Port of Los Angeles. It had come to lead over a dozen vessels in an aquatic parade for Tall Ships Festival LA on August 23. The giant duck had already spent time in Australia, Taiwan, China, Belgium, Japan, New Zealand, Brazil, Pittsburgh, and elsewhere.[1] 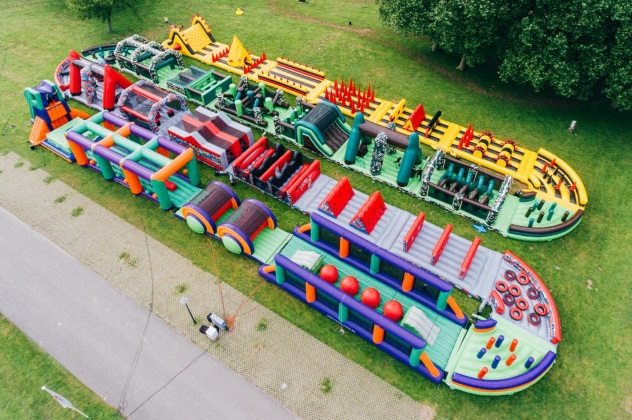 The world’s tallest inflatable obstacle course is 272 meters (892 ft) long and contains 32 obstacles, including mountains, forests, and giant balls. Nicknamed The Beast, the challenging course was set up at Alexandra Palace in London in August 2017.

Only adults are admitted to the course, which allows them to navigate a field of footballs, bully their way past large Xs, plunge through porthole-like openings in walls, climb ladders, make their way past conifers in an alpine forest, hop through donuts, crawl through tunnels, and careen down slides.[2] 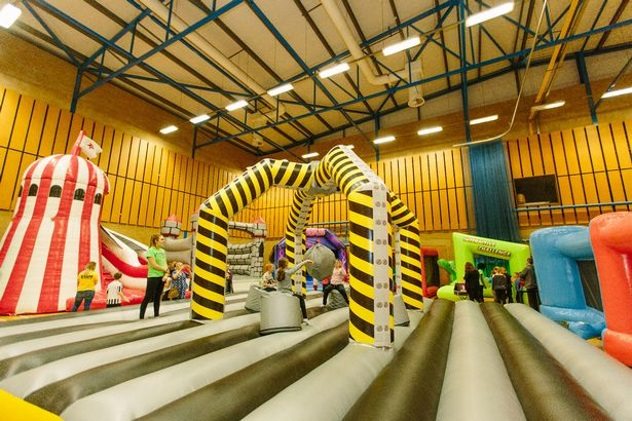 The United Kingdom’s biggest inflatable play park invites children ages five to 13 to dodge a sweeping mechanical arm, lunge into a pool to grab orange plastic balls, ride a mechanical sheep, be deluged with lavender slime, and receive a pie in the face. The park is all about physical exercise, and children jump, duck, slip, slide, squeeze, and bounce as they make their way past a series of obstacles such as the “Total Wipe-out machines [and] giant inflatable slides” or participate in “gladiator jousts [and] bungee runs.”

The two-hour session is followed by a half-hour magic and game show. Adults who want to get in on the action can participate in “adults only evening sessions.”[3] 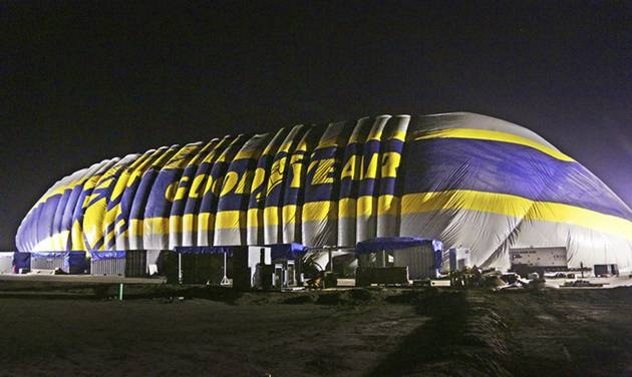 It’s hard to imagine an inflatable larger than a Goodyear blimp, but the Goodyear Tire & Rubber Company has one. On December 13, 2017, an inflatable Goodyear hangar in Carson, California, became the permanent home of Wingfoot Two, one of the company’s semirigid airships. Like Goodyear’s blimps, Wingfoot Two, a dirigible, flies over football stadiums during games. 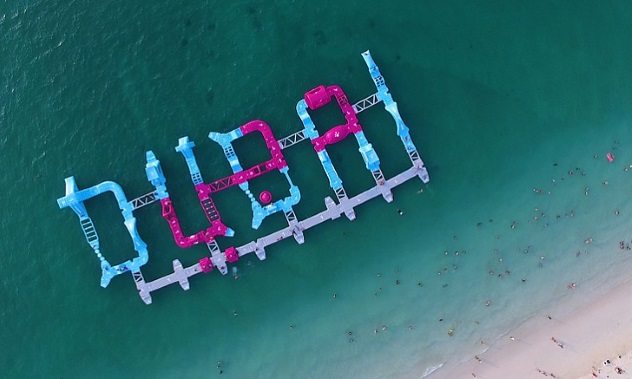 On September 1, 2016, Dubai opened the region’s biggest water park. Blue and pink inflatable letters connect to one another to form the park, which is 77 meters (253 ft) long and 33 meters (108 ft) wide. The letters, which float in the waters off the coast of the Jumeirah Beach Residence waterfront community, spell out “DUBAI.”

The innovative park was designed by its creator Ben Chaibah, the founder of Aqua Fun LLC. The park, which accommodates 500 visitors, is configured as an obstacle course containing slides, towers, cliffs, ramps, “wiggle bridges,” and more.[5] 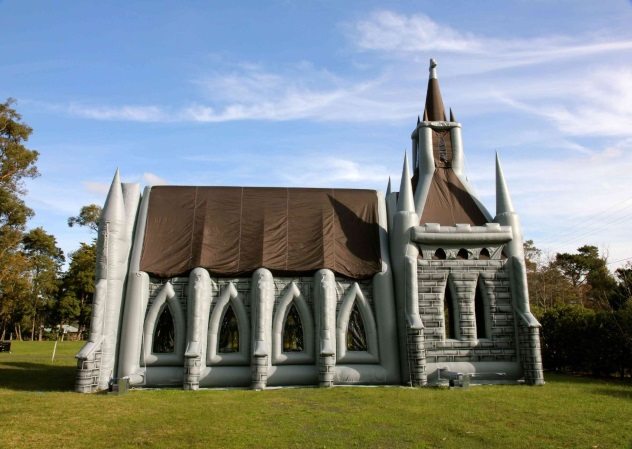 Today, a bride and groom needn’t go to church to have a church wedding. The church, including the steeple, organ, and stained glass “windows,” will come to them. All that’s required is a two-hour notice. The church is so authentic-looking that Michael Gill of Xtreme Inflatables said, “People just cannot believe how big it is and how real it looks—from close up the building appears to be made of stone.”

As churches go, Gill’s is more the size of a chapel, measuring just 3.7 meters (12 ft) tall and long, but it said to be able to accommodate a wedding party of 60. Although its assembly requires two hours, it can be taken down in only a half hour. The downside to using the inflatable church is its cost: It sells for £25,000.[6] 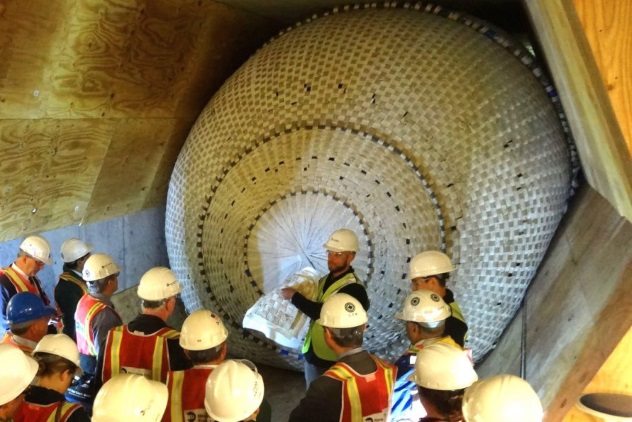 To prevent the New York City subway system from flooding in the event of another major storm like 2012’s Hurricane Sandy, the Metropolitan Transportation Authority is considering using a gigantic inflatable plug. The plug, which would expand to seal tunnels, was developed by a West Virginia University team of researchers as part of the Resilient Plug Program.

By slowing or preventing flooding, the huge “bladder” plugs allow workers to pump water quickly from affected areas. Made of extremely durable synthetic fibers, the plugs cost $400,000 each. Although expensive, they’re only a fraction of the $5 billion in damages caused by Sandy.[7] 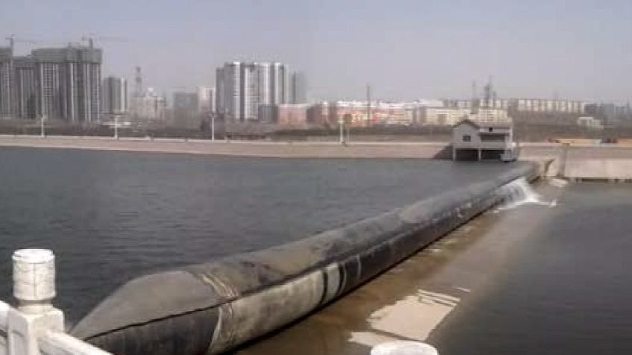 Los Angeles officials had big plans. They’d envisioned a $10 million project that would include a “dam [that] would [ . . . ] drive a 70-foot water wheel with buckets designed to lift 80 gallons per minute.” The buckets of water would splash “into a stream landscaped with cottonwood trees adjacent to the Los Angeles State Historic Park, just north of downtown.” As a result of this system, less water from the Los Angeles River channel would be used, and less wastewater would make it into the ocean. The rubber dam would be inflatable, and it would be only the first of nine others to be installed on the river.

The project was not without critics. Some feared a network of dams would prompt development along the channel, which has a history of major flooding every century or two. Critics also contended that “true ecosystem restoration” along the channel is of greater value than big construction projects that would ultimately provide only “moderate groundwater recharge.” In addition, Travis Longcore, a spatial scientist at the University of Southern California, said the rubber dams might create a slew of new breeding grounds for the local bullfrog population.

Supporters of the project are awaiting permits to install the inflatable dam. Hydrologist Mark Hanna, who helped design the project, said, “We expect a final permit from the U.S. Army Corps of Engineers.”[8] 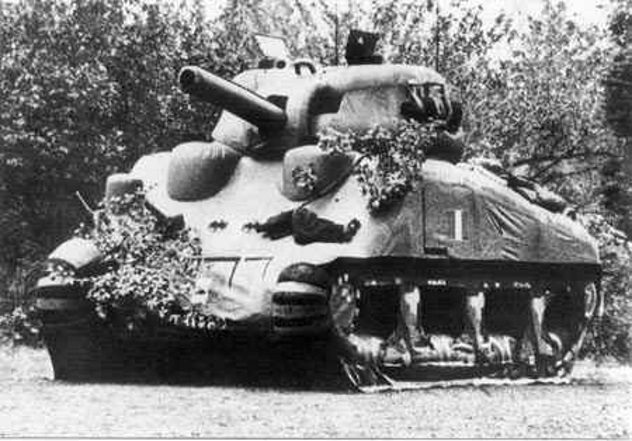 Before the Allies invaded Europe in 1944, US general George S. Patton was put in command of the First US Army Group, a “phantom force” that occupied empty tents. The ghost unit was transported by vehicles made of various lightweight materials, like rubber, fabric, or wood. In high winds, an inflatable tank’s turret might be blown off the “armored” vehicle and tumble across the landscape, or an inflatable truck, caught in a high wind, might roll over a few times, as soldiers sought to restrain the errant vehicles.

Despite such issues, the so-called “Ghost Army” ultimately succeeded in fooling the German high command, including Adolf Hitler himself. More than 20 times, it threw the German military leadership off and hid the Allies’ actual troop movements in France, Belgium, Luxembourg, and Germany.

Now, the Russian Ministry of Defense is back at it, deploying inflatable tanks, jets, and missile batteries. The inflatable vehicles and equipment are provided by RusBal, a hot-air balloon company, as part of a larger campaign of deception known as maskirovka, which has been in use since the Cold War. Reportedly, Russia’s military leaders weren’t sure about using inflatable vehicles, weapons systems, and equipment at first, but they’re apparently on board now.[9] 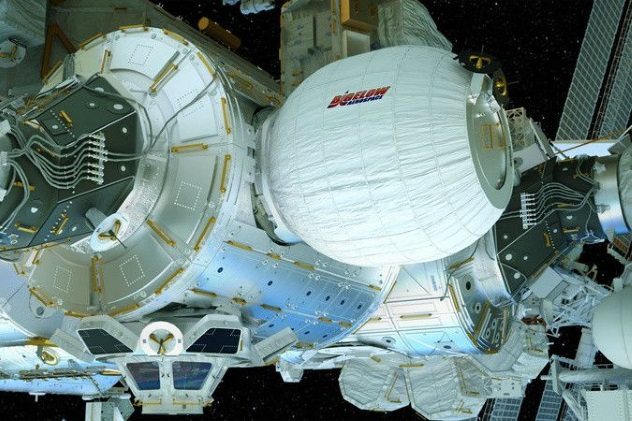 On May 19, 2016, NASA tried to expand the International Space Station’s inflatable room, the Bigelow Expandable Activity Module (BEAM). Things did not go well. When American astronaut Jeffrey Williams tried to inflate the chamber, it wouldn’t expand. No one could say why.

Intended to provide additional living and work space for astronauts undertaking long space missions, the BEAM is attached to the exterior of the space station. Williams intended to inflate the structure to start a two-year test to see how it handles space. As he opened the air valve to admit air into the BEAM, “the module’s internal pressure increased,” but the structure “failed to expand at the expected rate.” Even after two hours, twice the amount of time the inflation of the room should have required, the structure still hadn’t expanded fully.

Three days later, in another attempt to inflate the room, everything went according to plan, and the chamber assumed its expected dimensions without a hitch.[10]

Ten Survivalist Foods and How to Find Them