The Hollywood Chamber of Commerce maintains the official site of the Hollywood Walk of Fame. They announce “Upcoming Ceremonies,” profile celebrities who’ve received stars on the Walk, and provide other information concerning the organization and its more than 2,500 stars. (Actress Gillian Anderson will become the 2,625th celebrity to receive a star on the Walk in January 2018.)

While serving as acting president of the Hollywood Chamber of Commerce, E.M. Stuart conceived the idea of the Walk, which was set in motion in 1955. The star’s prototype included a caricature, but this feature was abandoned as “too difficult to develop.” The proposed brown and blue colors of the stars’ sidewalks were changed to black and coral. Celebrities from the film, television, radio, and recording industries were eligible to receive the honor of having a star on the Walk.

Although millions visit the Walk each year and most appear to enjoy the attraction, a few people have vandalized some of the celebrities’ stars. Sometimes, the vandalism seems to have been motivated by misdirected admiration. At other times, disapproval of a celebrity’s behavior appears to have been the reason behind the crime.

A prank might inspire vandalism. Occasionally, the acts seem to have no discernible motives. Each time a star is defaced, its cleanup or restoration costs thousands of dollars. The crime is a felony punishable by fines and jail time. When there are over 2,500 possible targets within a few miles of one another, it’s hard to put an end to such offenses, no matter what inspires them.

Donald Trump’s star on the Hollywood Walk of Fame, which was added in 2007 in recognition of his work on the television series The Apprentice, has been defaced by a swastika, a mute symbol, and feces. It’s been vandalized so many times that the Hollywood Chamber of Commerce was said to have considered removing it.

In February 2017, James Lambert Otis, who had pleaded no contest to a charge of vandalism, was sentenced to three years of probation and 20 days of work for the California Department of Transportation. He was also ordered to pay $3,700 to the Hollywood Historic Trust and $700 to the Hollywood Chamber of Commerce.

Otis was videotaped destroying Trump’s star with a pickaxe and a sledgehammer while dressed as a construction worker. After smashing the star, he removed the brass medallion at its center. 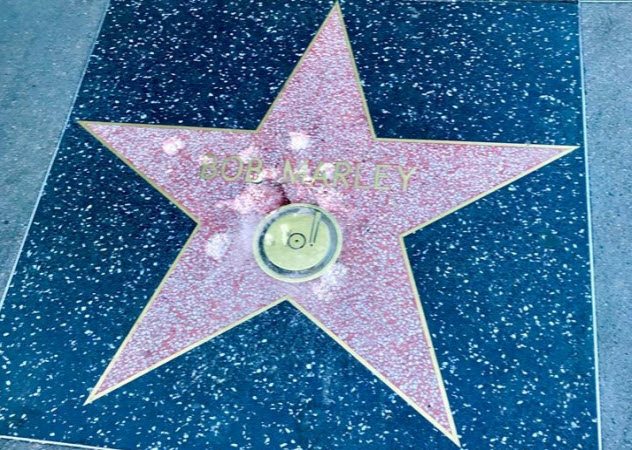 Reggae legend and activist Bob Marley (1945–1981) was awarded a star on the Hollywood Walk of Fame in 2001. On October 23, 2017, vandalism to his star was discovered. It appeared that the vandal had pounded the star with a sledgehammer. The damage was repaired two days later at a cost of $3,000, which was borne by the Hollywood Historic Trust.[2]

Ana Martinez, a Hollywood Chamber of Commerce member and the Walk of Fame’s spokesperson, shared a photograph of the vandalized star on Twitter, asking why anyone would have committed such a disrespectful act. Whether the vandalism was prompted by someone who objected to Marley’s activism is unknown. To date, no one has been arrested for the bewildering crime. 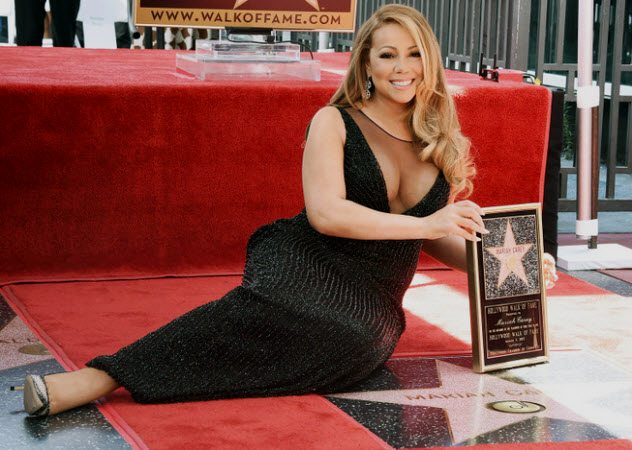 On August 5, 2015, singing sensation Mariah Carey received a star on the Hollywood Walk of Fame in recognition of her successful musical career. In January 2017, the celebrity’s terrazzo-and-brass star was vandalized. A question mark was scratched into the star next to the singer’s name as if challenging her status as a performer.

The incident occurred a week after her dreadful New Year’s Eve show in Times Square where she was wearing a damaged earpiece and was subsequently discovered to be lip-synching. According to Carey, Dick Clark Productions deliberately sabotaged her act to increase its ratings. The production company denies the singer’s allegation.

Police reviewed surveillance camera footage and followed up on a lead that an Instagram user had claimed responsibility for the act of felony vandalism.[3] 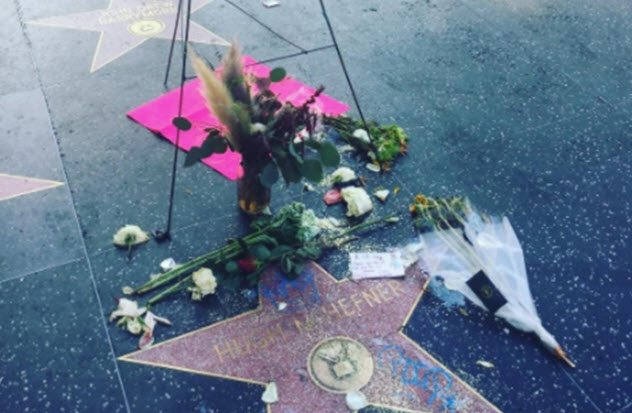 Twenty-four hours after the death of Playboy magazine publisher Hugh Hefner on September 27, 2017, his Hollywood Walk of Fame star was vandalized. The act didn’t appear to suggest contempt for Hefner, whose publication featuring nude women was controversial.

The vandal used a type of crayon to add a blue crown above the celebrity’s name, as if to signify that he was a pop culture king. If apprehended and convicted, the culprit would have to pay for the cost of the star’s repair according to a Walk of Fame spokesperson.[4] 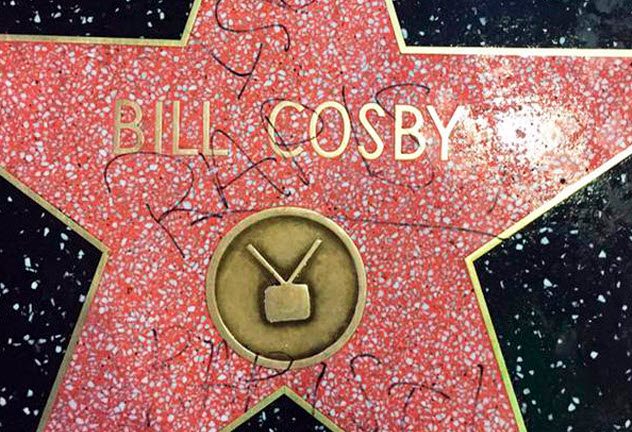 After dozens of women accused comedian and actor Bill Cosby of having drugged and sexually assaulted them, many former fans saw the once-beloved father figure and star of such television hits as I Spy and The Cosby Show as a despicable and detested fiend.

This change in the public’s perception of the celebrity may explain the vandalism to his star on the Hollywood Walk of Fame, which was awarded in 1977. The vandal used a black marker to deface the star several times with the word “rapist.” The culprit is still at large.[5] 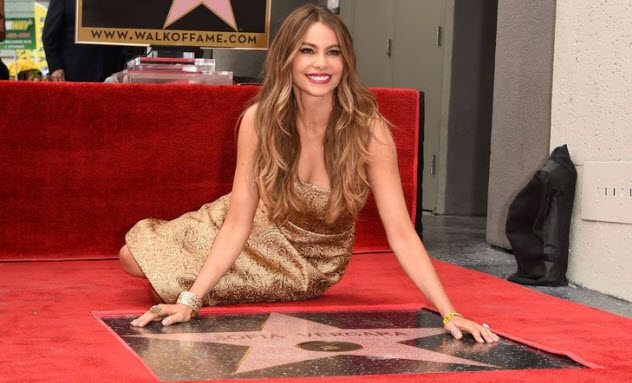 In the past, protesters have made known their displeasure for Sofia Vergara, who froze her embryos. Perhaps the vandalism of her star on the Hollywood Walk of Fame is related to their objections to the actress’s refusal to either implant or destroy the embryos.

In December 2016, embryos “Emma” and “Isabella” and their trustee, James Charbonnet, initiated a lawsuit against Vergara which claimed that Vergara has denied her embryos their inheritance from a Louisiana trust that was set up for them earlier. Vergara supposedly did this by refusing to let the embryos be born.

The plaintiffs ask that Vergara be ordered to release Emma and Isabella to Nick Loeb, the embryos’ father. This would allow the embryos to live and receive funds from their trust for education, health care, and other things.[6]

A Louisiana judge dismissed the lawsuit on the grounds that the embryos are “California citizens” and the plaintiffs had filed their lawsuit in the wrong state, possibly because Louisiana favors the rights of unborn children. His court had no jurisdiction in the case, the judge said, adding that the case might require an evaluation of the Constitution.

While the actress and her fiance, Joe Manganiello, were in a Hollywood theater watching the premiere of Magic Mike XXL, her star, which she received in May 2015, was defaced with the hashtag “#embryodefense.” 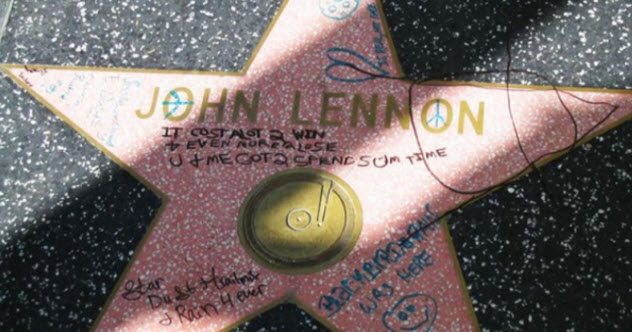 “It cost alot [sic] to win & even more 2 lose.” This observation was one of several scribbles on the late John Lennon’s Hollywood Walk of Fame star. The graffiti defacing this state landmark was discovered by Gillian Lomax as she led a tour group there. The star was also marred with a smiley face, a spotted toadstool, “Blackbird . . . Rain was here,” and “I love you.”

“Morons did it,” Lomax said, calling the writings “rather tacky.” The messages were scrawled in different colors of ink, which suggested that they were written by a group according to Lomax. “I tried to rub it out but to no avail,” she added.

After Ana Martinez of the Hollywood Walk of Fame was notified, the graffiti was removed and the star restored to its original appearance. Capitol Records reportedly sought surveillance tape that might have captured the vandals.[7] 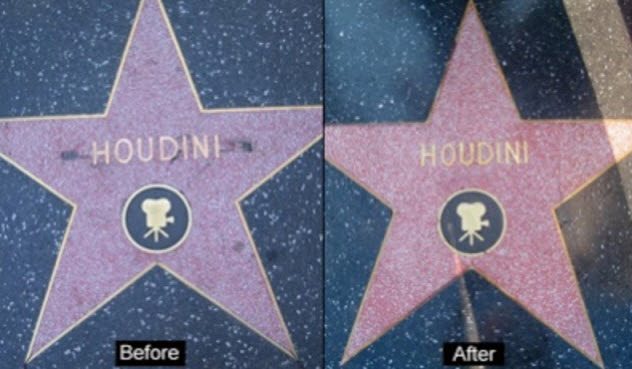 Famed magician Harry Houdini escaped from shackles, cages, straitjackets, and traps during his illustrious career, but he might not have been able to escape the vandals who apparently damaged his Hollywood Walk of Fame star.

The star was unveiled in 1975 and had been undisturbed until Halloween night 2000, when it mysteriously cracked. It has since been repaired, thanks to David Copperfield, Penn & Teller, Siegfried and Roy, and others who paid for the restoration.

The second unveiling of Houdini’s star occurred in October 2008.[8] 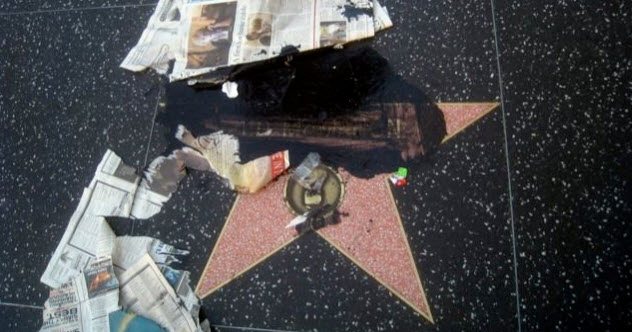 The newspapers stuck to Ed McMahon’s Hollywood Walk of Fame star may have collected there by accident. Alternatively, vandalism might have been the cause of the papers’ sticking to the black substance resembling paint or tar that was spread across the landmark.

No notes, flowers, or other items were present at the site. The Hollywood Chamber of Commerce cleaned up the mess the same night. If the act was one of vandalism, no one knows why.[9] 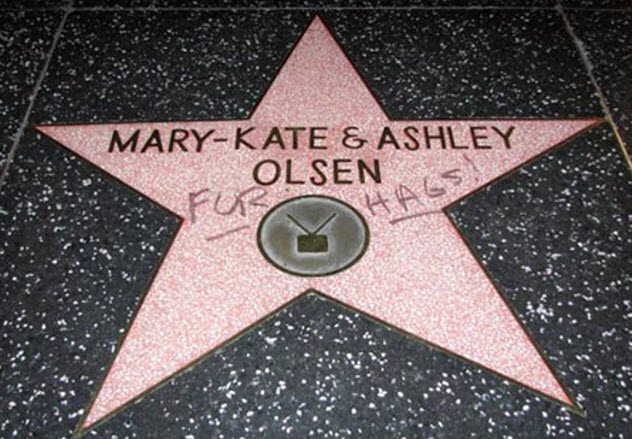 Twins Ashley and Mary-Kate Olsen, who starred in the hit television series Full House and are partners in their Dualstar business empire, share a star on the Hollywood Walk of Fame. The twins frequently wear fur and have been targeted by animal rights activists and others, including the vandal who defaced their star with “FUR HAGS!”

The star of fur-wearing actress Sharon Stone was also defaced with the phrase “OLD FUR HAG!”[10] Although the People for the Ethical Treatment of Animals (PETA) has frequently attacked the twins for wearing fur, it seems unlikely that PETA itself vandalized the Olsens’ star.