If you’re a fan of the Netflix show The Crown, you’ll know that Queen Elizabeth wears an actual crown fairly regularly. For example, she wears one every year at the State Opening of Parliament. But there are other crowns that you haven’t seen very often unless you are old enough to remember her coronation in 1953.

Yes, that’s right. The queen has more than one crown. Actually, she has quite a few. But they only make up a small proportion of the priceless collection of gems, gold, and silver that makes up the crown jewels. Each one comes with a fascinating, impressive, and sometimes very amusing history. 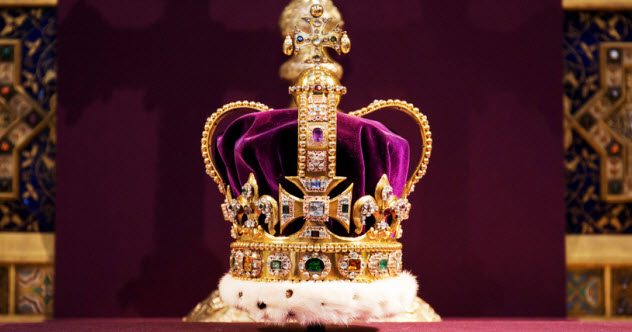 The most important piece in the crown jewels is St. Edward’s Crown. It is made of solid gold and was created especially for the coronation of King Charles II in 1661. A new crown was required because the previous crown, which had been used since Edward the Confessor’s time, had been melted down in 1649 when the monarchy was abolished and England briefly became a republic.

With the Restoration came a new crown. Although the crown is inlaid with precious gems now, it wasn’t back then. Until 1911, precious stones had to be rented for every coronation. Then they were removed from the crown and returned to the owners after the ceremony.

St. Edward’s Crown is only used during the coronation ceremony, where it is placed on the monarch’s head at the moment of coronation. So Queen Elizabeth II has only worn it once. No doubt she is quite relieved at its sparing use since it’s so heavy.[1]

Only three people are permitted to handle St. Edward’s Crown—the monarch, the Archbishop of Canterbury, and the Crown Jeweller. During Queen Elizabeth II’s coronation in 1953, the archbishop tied a piece of gold thread to the gold frame of the crown so that he could tell the front of the crown from the back. Unfortunately, prior to the ceremony, the thread was removed, leaving the archbishop to simply hope he’d gotten it right. 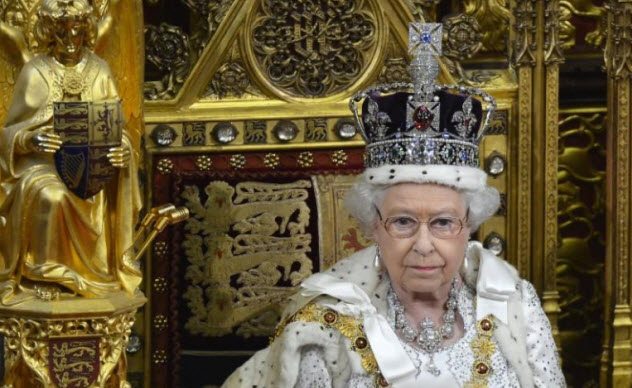 Much more commonly used is the Imperial State Crown, which the monarch wears during the State Opening of Parliament every year. It was also worn during Queen Elizabeth II’s coronation as she left Westminster Abbey.

Created as recently as 1937 for King George VI, it is an accurate copy of the one Queen Victoria had. The jewels from the George I State Crown were reused in it. Altered to accommodate the differing head shapes of various monarchs, the Imperial State Crown was last adjusted for Queen Elizabeth II. The crown is made of gold, silver, and platinum and contains 2,868 diamonds, 17 sapphires, 11 emeralds, 269 pearls, and four rubies.[2]

The largest gem in the crown is the Cullinan II diamond (317 carats), also known as the Second Star of Africa. It is the second-largest stone cut from the famous Cullinan diamond, the largest ever mined. The 3,106-carat stone was cut (no doubt nervously) by Asschers of Amsterdam. The largest stone from the subsequent suite of diamonds also found its way into the crown jewels as we’ll discuss below.

The second-largest jewel in the crown is the Black Prince’s Ruby (170 carats) which was said to have been worn as a pendant and was pierced in the medieval period. The ruby was also worn by Henry V at the Battle of Agincourt.

The crown also contains four pear-shaped pearls which were worn by Queen Elizabeth I as earrings. Supposedly gifted from Catherine de Medici to her daughter-in-law, Mary, Queen of Scots, the Virgin Queen apparently acquired them after ordering Mary’s execution. 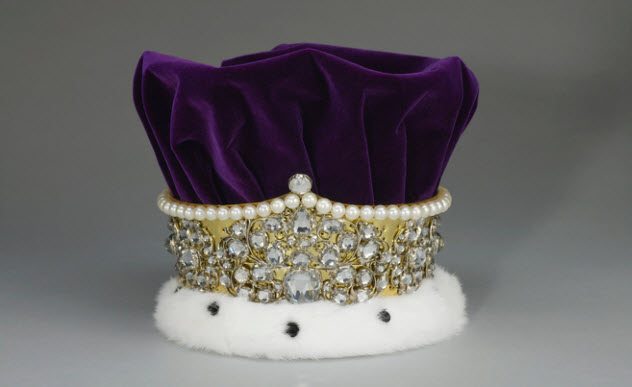 Other members of the royal family have also worn ceremonial headwear. Traditionally, the queens consort have worn diadems or circlets at the coronations of their husbands since the 14th century.

In 1685, Mary of Modena, wife of James II, only received delivery of her specially commissioned diadem the day before the ceremony. Like other crown jewels, it was encrusted with 177 diamonds which were only on loan and had to be removed later. Subsequently, they were replaced with quartz crystal. The diadem was used by various female members of the royal family.

It wasn’t until 1937 that Queen Elizabeth, wife of King George VI and mother to the present queen, had a new crown created for her husband’s coronation. It contains 2,800 diamonds and is set in a platinum frame.

The famous Koh-i-Noor diamond was mounted on the front cross. This diamond had also been worn in the crowns of Queen Mary and Queen Alexandra. In addition, Sultan Abdul Medjid gave Queen Victoria the large diamond at the front of the crown’s band in gratitude for British military assistance during the Crimean War.[3] 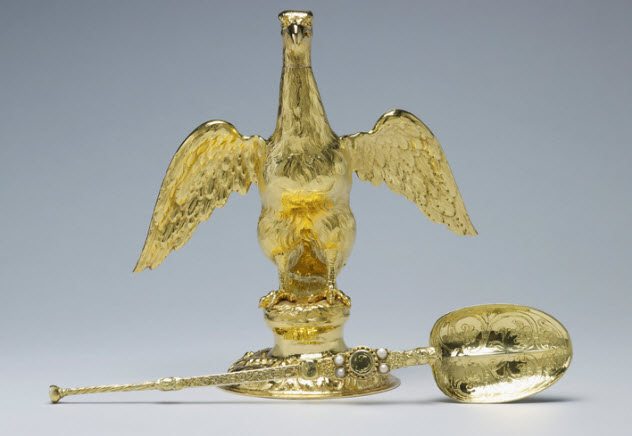 As with other articles of the crown jewels that were melted down by Oliver Cromwell, the gold Ampulla created in 1661 replaced a smaller, similar vessel now lost to history. The Ampulla is cast in the shape of an eagle with outspread wings. The head is detachable, and there is a small opening in the beak.[4]

It is most closely associated with the reverent and spiritual aspects of the coronation of the monarch because it contains the holy oil with which the king or queen is anointed by God. The archbishop touches the head, breast, and hands of the monarch with the oil.

The oil is poured onto the Anointing Spoon. Made of silver gilt, it is the oldest piece in the crown jewel collection. When Cromwell proclaimed a republic, the spoon was due to be melted down along with the other crowns and regalia. But it was sold off instead. Purchased for 16 shillings by a Yeoman of Charles I’s Wardrobe named Mr. Kynnersley, it survived the short-lived republic. Kynnersley returned the Coronation Spoon to King Charles II in 1661.

During Queen Elizabeth II’s coronation, this most solemn moment of the proceedings was not allowed to be filmed by the television cameras broadcasting the ceremony. A canopy of gold was held over the queen for the sacred anointing. 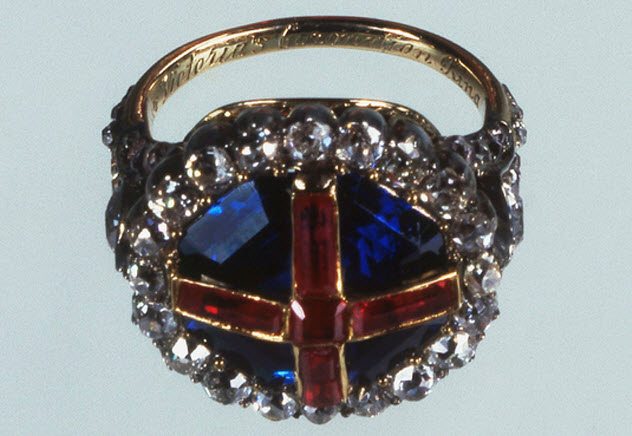 The sovereign’s ring has been used since the coronation of William IV in 1831. The ring contains sapphires, rubies, and 14 brilliant diamonds. Designed to represent the Crosses of St. George and St. Andrew, a replica of the ring had to be specially made to fit the small fingers of Queen Victoria.

After her coronation, she wrote, “The Archbishop had (most awkwardly) put the ring on the wrong finger, and the consequence was that I had the greatest difficulty to take it off again, which I at last did with great pain.”[5] 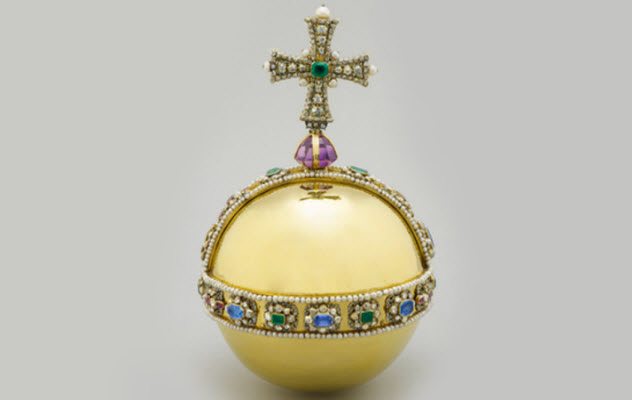 An inherently religious symbol, the Orb depicts the Christian world as represented by a globe with a cross mounted at the top. The Orb is a hollow gold sphere and was made for coronation of Charles II.

It is encrusted with many gems, including 375 pearls, 365 diamonds, 18 rubies, nine emeralds, nine sapphires, one amethyst, and one piece of glass. Symbolically, it is placed in the sovereign’s right hand during the coronation when he is invested with the symbols of sovereignty and carried in his left hand as he leaves Westminster Abbey.[6] 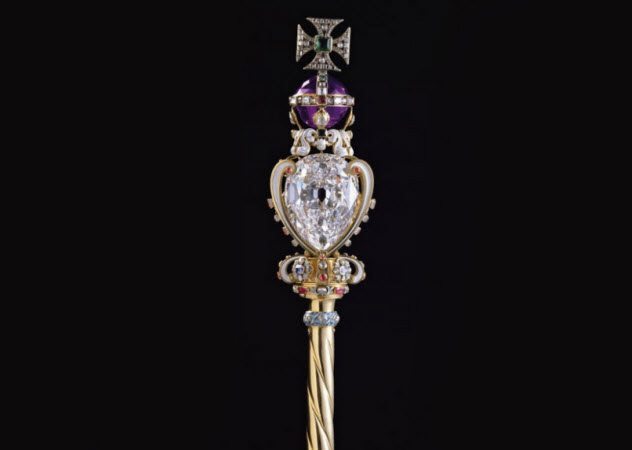 The Scepter and Rod are also ornamental items in the collection with overt religious symbolism. Resembling a shepherd’s staff, it denotes the monarch’s role as pastoral carer for his or her people. According to the official website for the crown jewels, its significance was described at the coronation of William the Conqueror in 1066: “By the scepter, uprising in the kingdom [is] controlled, and the rod gathers and confines men who stray.”[7]

Interestingly, part of the aforementioned Cullinan diamond—stones of which are featured in the crowns—was also incorporated into the Sovereign’s Scepter with Cross when King George V had the Cullinan I diamond (530.2 carats) added to it in 1910. 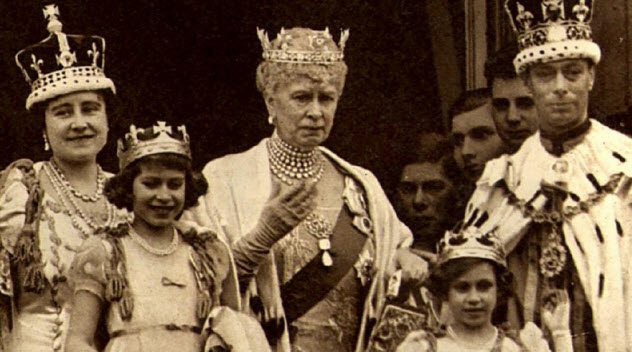 In a television documentary about the crown jewels, it was recently revealed that they were once nearly lost forever when they were removed from the Tower of London.

During World War II, when London was under heavy attack from German bombing and the prospect of a German invasion was a very real threat, King George VI ordered that the nation’s most important symbols be spirited out of the capital and hidden somewhere safe so that they wouldn’t fall into the hands of the Nazis.

The jewels were placed in a biscuit tin and hidden in a secret vault deep in the underbelly of Windsor Castle. The only entrance to the vault was a nondescript trapdoor in the floor of a subterranean corridor. Thankfully, those few people entrusted with the knowledge of the jewels’ hiding place survived the war. When it was over, the crown jewels were returned to the Tower of London.[8] 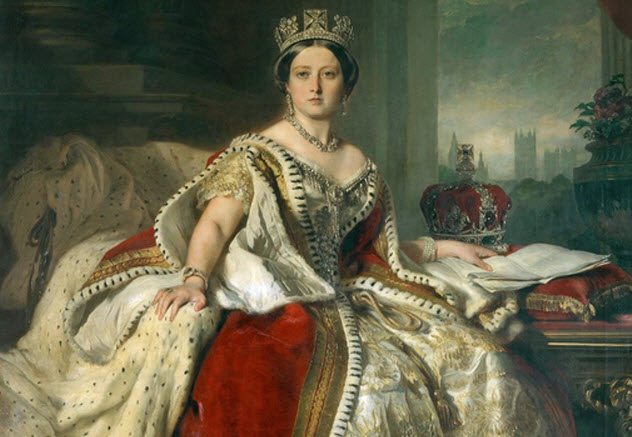 The crown jewels might take center stage at the most solemn ceremonial occasions in the United Kingdom, but they have also played a part in some farcical moments, too.

During one State Opening of Parliament in the 19th century, the Duke of Argyll was carrying the Imperial State Crown on a cushion for Queen Victoria. But the crown slipped off, falling to the ground with a “great crash.” The Queen, who was most decidedly not amused, later wrote in her diary that the crown was “all crushed and squashed, looking like a pudding that had sat down.”[9]

Similarly, during James II’s coronation banquet in 1685, the scepter fell off a table, dislodging two large jewels from within it. Thankfully, they were later recovered from the floor of Westminster Hall. 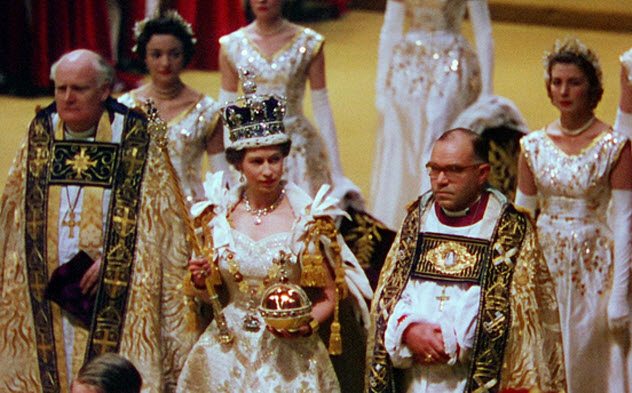 Whatever it was, Her Majesty certainly delivered. Although awed by the brilliant jewels, the queen commented that they were not exactly comfortable to wear. “You can’t look down [when wearing the crown] to read the speech, you have to take the speech up. Because if you did, your neck would break, it would fall off.” Charmingly, she added, “So there are some disadvantages to crowns, but otherwise they’re quite important things.”[10]

R J Kennedy is a writer and filmmaker.

For more fascinating facts about the British monarchy, check out 10 Unexpected Perks To Becoming The Queen Of England and 10 Ways The Queen’s Death Will Be Bizarre.