Many of us have tasted and fallen in love with the unique and mouthwatering flavor of KFC’s deep-fried chicken. At the very least, you might recognize the colonel and his famous red bucket of chicken.

On top of this, you’ve probably read countless news stories about the franchise—good and bad, true and false. But here are some things that you likely haven’t read or heard about the fast-food giant that’ll take you by surprise.

10 It’s A Christmas Tradition In Japan To Eat KFC 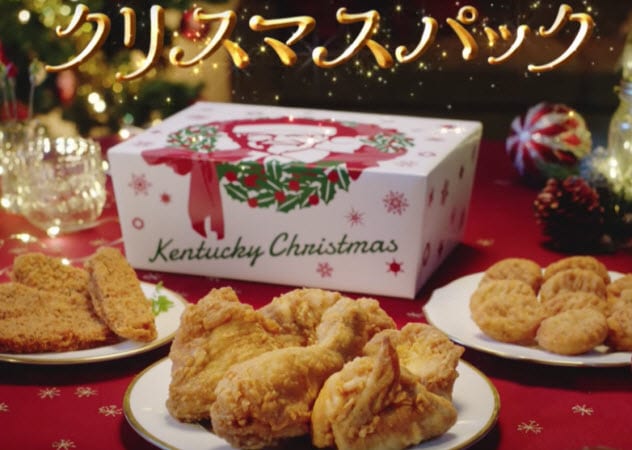 Although your traditional Christmas might consist of snow, a roast turkey, and mistletoe by the fire, Christmas in Japan is traditionally celebrated with KFC. This is all due to an enormously successful advertising campaign run by the fast-food giant.

According to Japan’s KFC spokeswoman, the campaign began when a store manager had the ingenious idea to create a “party barrel” to be sold on Christmas. In 1974, the idea went nationwide and shortly became known as “Kentucky Christmas.”[1]

The idea became famous quickly as there was no prior tradition for Christmas in Japan. So the idea filled a void for many families. The store manager swiftly climbed the corporate ladder to serve as president and CEO of Kentucky Fried Chicken Japan.

Now at Christmastime, over three million Japanese families join tedious lines to order their Christmas fried chicken. Even worse, those who forgot to order can line up for hours on Christmas Day just to get their Southern-fried chicken. Reports show that the Christmas packages make up one-third of the chain’s annual sales. That’s a lot of chicken for one day. 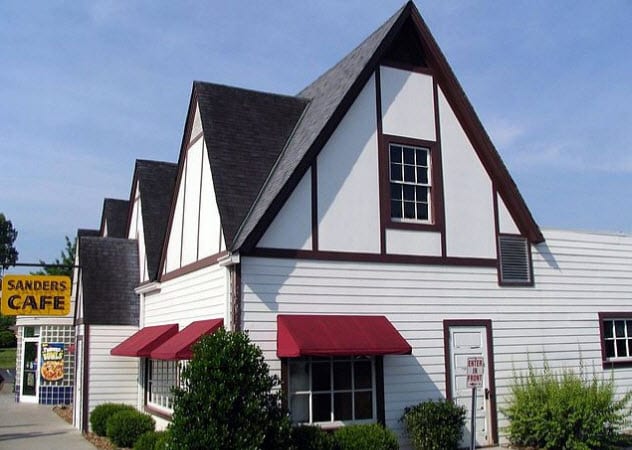 When Harland Sanders (aka “the colonel”) first started serving his infamous chicken dishes, he was working at a service station in Corbin, Kentucky. He was a franchisee of the well-known Shell Oil Company and started to cook different foods to improve sales. The menu consisted of the soon-to-be-famous chicken dishes as well as steak, ham, and a range of other seasonal comfort foods.

Unfortunately, the restaurant did not serve the famous fried chicken. That was added later after he finalized the famous 11 herbs and spices. Before long, people were coming from far and wide to visit the service station and cafe and taste some of the colonel’s incredible recipes.

8 Harland Sanders (‘The Colonel’) Was Never A Real Colonel 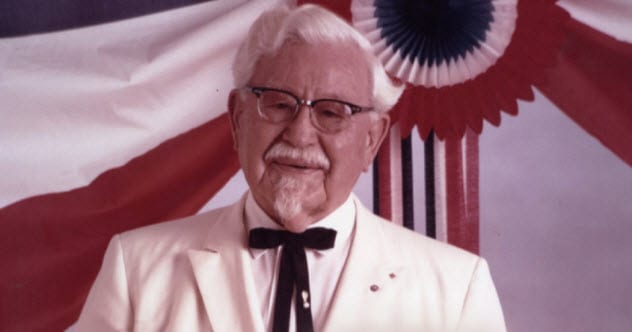 At age 16, Sanders falsified a birth certificate to prove that he was old enough to enter the army. The documents were approved, and he was sent to Cuba where he was honorably discharged a mere three months later.

So where did the title “colonel” come from?

In the Commonwealth of Kentucky, the title of “colonel” is a high honor bestowed upon a person for his “outstanding service to community, state, and nation.” It is awarded by Kentucky’s governor or secretary of state. Titleholders are deemed to be ambassadors of good fellowship around the world.

Sanders was declared a colonel twice. First, in 1935, Kentucky Governor Ruby Laffoon declared Sanders an honorary colonel after his return from the war. The next time occurred in 1949. He is the only person in history to fully embrace the title, and he carried it with him as he built up his Kentucky Fried Chicken empire.[3]

He even went as far as to sculpt his appearance into what he believed a true colonel would look like. Now that’s dedication. 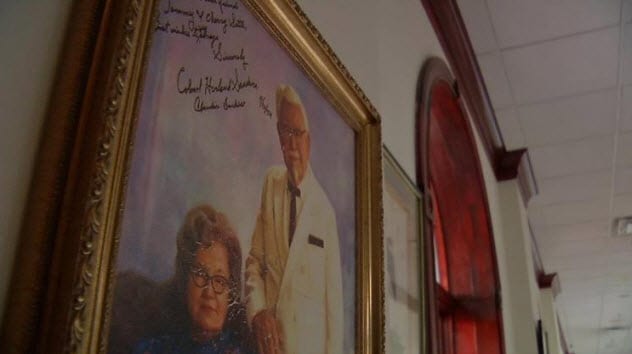 The colonel created such a big name for himself that his personal items are still being auctioned off to the highest bidder even as of this writing, 39 years after his death. Some of the auctioned memorabilia included the colonel’s signature white suit, Stetson hat, belt buckle, and many other smaller items.

These articles came into the hands of Dick Miller, the colonel’s personal driver. Miller drove Sanders to different KFC franchises around the country. Although he speaks fondly of Sanders, Miller has also noted that Sanders was hard to work for. In fact, Miller only remembered being given one day off in his entire career.

However, he did come to own this incredible collection of the colonel’s belongings which were sold by Heritage Auctions. His explanation for selling such treasured items was simple: He knew that his children would sell them if he didn’t do it before he died.[4]

6 The Secret Recipe Is Actually A Secret 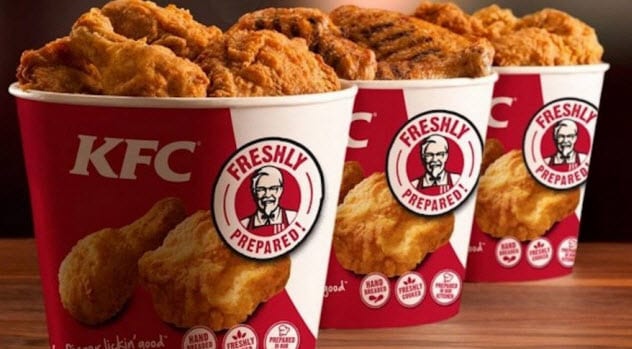 Colonel Sanders’s combination of 11 herbs and spices is famously known to be a secret. Sanders created two companies to develop the mix so that neither would ever have access to or knowledge of the complete recipe.

In 2016, the Chicago Tribune posted a story which announced that Joe Ledington, a nephew of Sanders, had released the recipe after finding it in a family scrapbook. The scrapbook contained the Last Will and Testament of Sanders’s second wife, Claudia Ledington. Supposedly, the secret recipe was written on the back of the will.

The reporter claimed that Ledington had insisted that the 11 herbs and spices scrawled on the back of the will were legitimate. However, he later denied making any such claims. Afterward, Yum Brands, the parent company of KFC, announced that they were the ones who still had the original recipe.

They issued a press release saying that many have claimed to know the secret recipe over the years, but it was handwritten by Sanders in 1940 and locked in a digital safe which is buried 0.6 meters (2 ft) deep in a concrete vault. The vault also has 24-hour video and motion detection monitoring. So, they claim that there is absolutely no way the secret is ever getting out.[5]

5 The Double Down Is A Real Burger 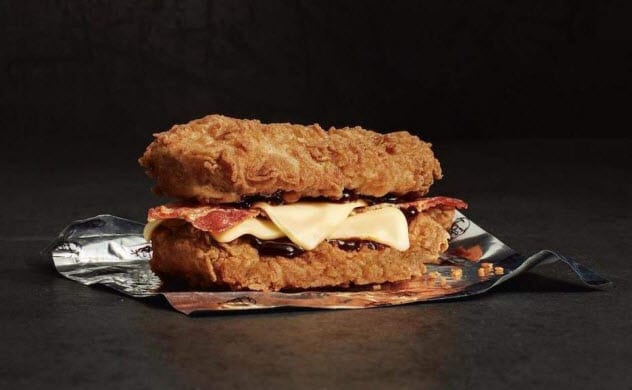 The Double Down is said to be possibly the most decadent burger ever! It’s definitely not a great choice if you’re looking to maintain any kind of health aspect in your diet.

For those of you who haven’t heard of it, the burger is made of strips of bacon coated with melted cheese, doused with barbecue sauce, and sandwiched between two pieces of deep-fried chicken. Are you drooling yet?

So, the succulent fact is that the bun is simply replaced by chicken! There was some speculation at the time of marketing as to whether the burger would actually be released, and now it can be confirmed.[6]

The Double Down burger was officially released in the US, Australia, New Zealand, and more recently, the UK. If you’re a chicken lover and don’t want to waste precious stomach space on bread, this is definitely the dish for you. 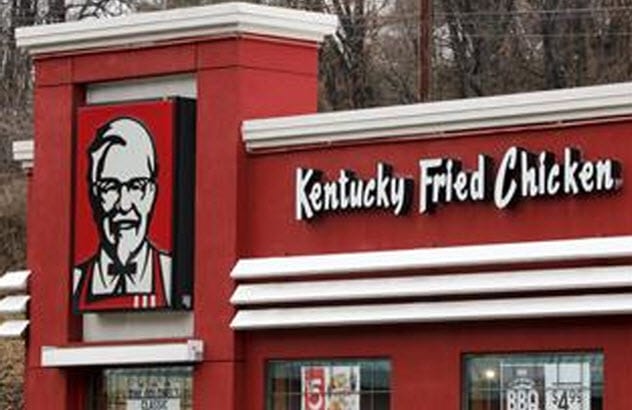 The famous Kentucky Fried Chicken name was actually supplied by Don Anderson, a painter hired by one of Sanders’s friends. After countless efforts to franchise his fried chicken recipe across the nation, Sanders ended up convincing this friend, Pete Harman, to simply sell the chicken at his Do Drop Inn restaurant in Salt Lake City.

After the restaurant added the specialty chicken to its menu, sales increased by a whopping 75 percent, fueling Sanders’s desire to franchise his recipe even more. Harman also created the concept of the bucket of chicken.

From his work with the Inn, Sanders successfully signed a number of franchise contracts to have his chicken sold in other restaurants. During this time, Sanders met Dave Thomas, a chef in one of the few restaurants selling his chicken.[7]

Thomas is the man behind the bucket logo that still hangs above KFC restaurants today. So, it was through this combination of people that the Kentucky Fried Chicken we know and love today got its trademark. 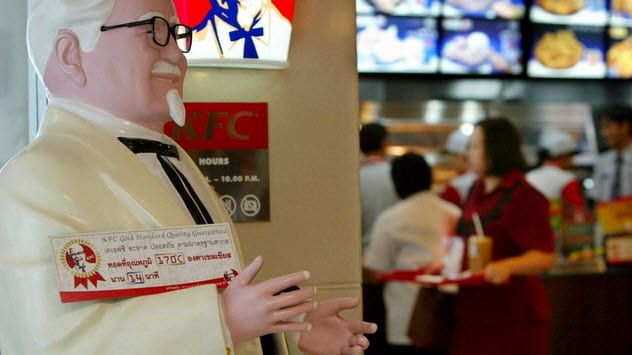 In 1987, Kentucky Fried Chicken took the incredible leap of being the first Western chain to open a restaurant in China. Over 30 years later, it has over 2,000 stores nationwide and is still the best-performing fast-food chain in China.

The international plan began in the early 1980s after success in Southeast Asia as “Ken De Jin.” By 1987, KFC had opened its first Chinese restaurant in the capital city of Beijing.

Along with its growth, KFC encountered several problems, such as the inability to import enough potatoes and having its stores trashed by protesting crowds in 1999.[8]

Despite these setbacks, KFC also had great success. With the economic boom of 2002, they opened the nation’s first drive-through restaurant. KFC really attained huge milestones in China.

2 You Can Purchase The Famous Spice Mix 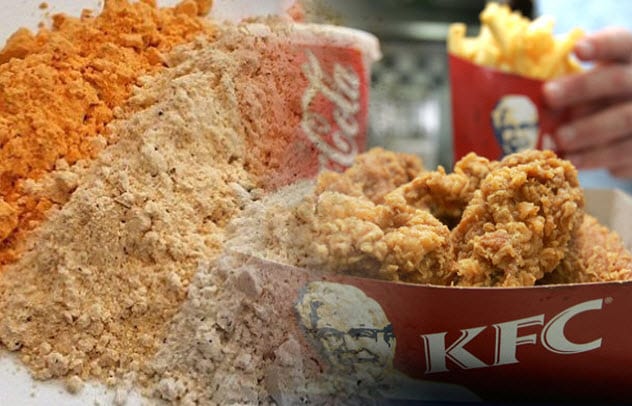 Wholesaler Fruishion, which sells marinades and seasoning mixes online, has listed a bag that they claim to be the KFC spice mix. This came about during the nationwide Kentucky Fried Chicken drought in the UK when fans were desperate for their “finger lickin’” goodness. Although the recipe is known to be a secret (as previously discussed), purchasers of the spice bag claim that the mix is as close to the real thing as anyone is ever going to get.[9]

Not only were people using the mix to fry their chicken, they were also getting creative by coating things like goujons, potatoes, and mushrooms as well as seasoning chips and wedges. Even after the reopening of KFC restaurants, the spice mix has been a massive hit on eBay with the seller maintaining a 100 percent positive feedback score. 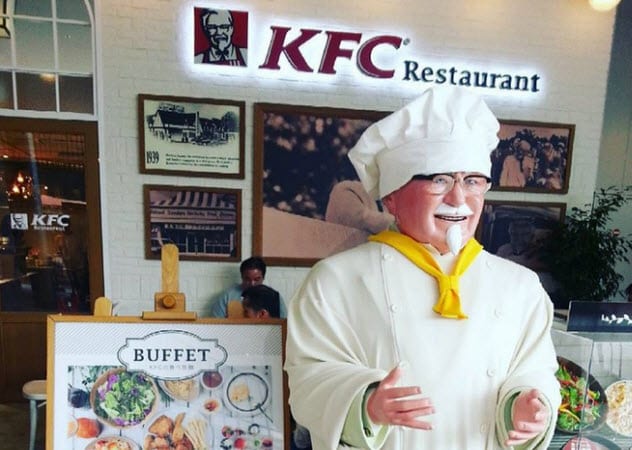 It is official. KFC Japan opened the first KFC all-you-can-eat buffet restaurant in Osaka. Restaurant goers are given approximately an hour and a half to gorge themselves on as much fried chicken as they can down. The buffet also includes other popular menu items such as pasta, sausages, and salads.

The restaurant has over 100 seats, including benches and tables, as well as lots of space for families with small, energetic children. If the aesthetics of the place don’t please you, the smell certainly will.

However, if you’re from a Western country, you will probably notice a slight difference in the taste as the recipe was adapted to accommodate local preferences. Nevertheless, you will recognize that classic KFC flavor.[10]

For dessert, the buffet boasts coffee jelly and ice cream as well as the option for all-you-can-drink beer at a small price upon entry. Unlimited chicken and unlimited beer, what more could you possibly want?

For more fast-food facts you never knew, check out 10 Things You Never Knew About McDonald’s and 10 Ridiculous Myths People Believe About Fast Food.