Certain places in the world are having problems with that one thing most of us prefer not to discuss: poop. When you visit these places, there is the likelihood (but not a certainty) that you will find feces just lying around. Even if you don’t, you definitely won’t miss the unmistakable stench.

These malodorous issues aren’t just limited to remote destinations in Third World countries, either. Proving that the god of poop (if there is one) does not discriminate, these poop problems cut across villages, towns, and cities in countries both rich and poor. Read on for some facts that never make into travel brochures. 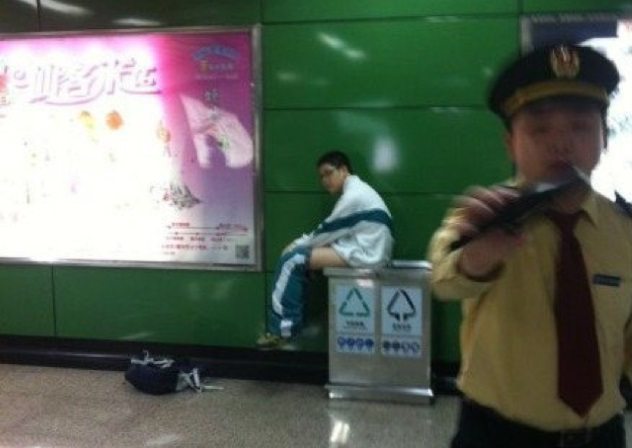 Roadside defecation is a common thing among toddlers and small children in China. Some adults do it, too, but they form the minority. Many parents have no qualms with their children pooping in public, and some even dress their toddlers in crotchless pants that leave their behind exposed so they can quickly get down to business.

The bigger problem is that Chinese parents are exporting their toddlers’ poor pooping habits out of China. There is a sign outside the Louvre in Paris warning tourists not to allow their toddlers leave a dump in the surroundings. The sign is written in Mandarin Chinese, so we know who it is directed at.

Public pooping isn’t the only problem some countries have with Chinese tourists. They’ve been accused of disobeying traffic rules, spitting in public, and vandalizing public property. This irresponsible behavior has irked several Chinese citizens, including Deputy Premier Wang Yang, who did not hide his displeasure. Incidentally, a 15-year-old Chinese tourist desecrated the walls of a 3,500-year-old Egyptian temple by writing “Ding Jinhao was here,” around the time the deputy premier was venting.

A hotel in the Maldives started removing kettles from rooms after staff realized that Chinese tourists used them to cook seashells and boil noodles. The Chinese soon found out and boycotted the hotel until it returned the kettles to the rooms.[1] 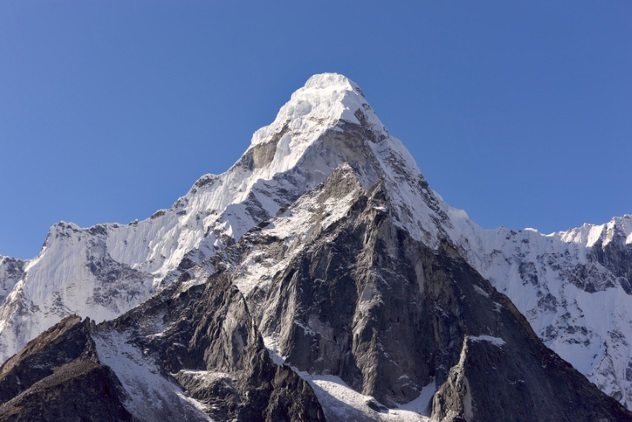 There is so much poop on Mount Everest that climbers now go up there with rolls of carpets to spread under their tents. If they don’t, they could be sleeping on piles of poop. Climbers who melt snow to drink aren’t safe from the poop scourge, either. For all we know, they could be drinking an unhealthy mixture of feces and water.

Everest is extremely cold, so poop only freezes and never decomposes. The freezing checks the spread of diseases, but the poop sometimes mixes with snow, becomes airborne, and causes infections. This is why intestinal and respiratory infections are common among people climbing Everest.

Mount Everest’s poop problem becomes worse when we realize that poop on the mountain don’t just remain there and wait for climbers to sleep on it. It’s constantly moving down the mountain, which means that the snow at the lower areas of the mountain isn’t poop-free, either.[2] 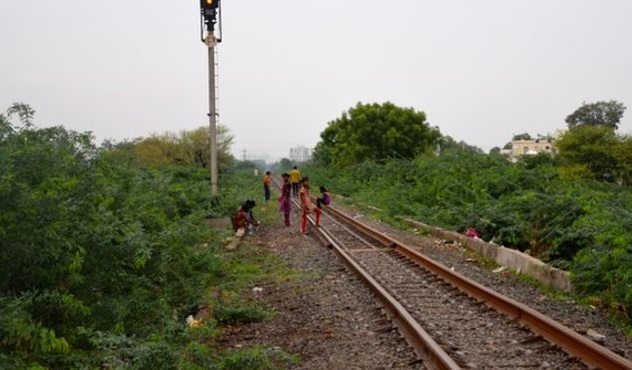 Over half of India’s population defecates in the open. This amounts to nearly 600 million people. The results are evident. Over 200,000 children lose their lives to diarrhea every year, and half of the kids below the age of five are underdeveloped for their age.

Although India does not have enough toilets for its people, the cause of the problem is a bit deeper. Most Indians just prefer to poop in the open. There are several reasons for this. One is that the majority of Indians are not used to using toilets. Another is based on superstition. There is the belief that witches hide in toilets and fears that children could be kidnapped when they use the toilet.

This means building more toilets is not the solution, since people wouldn’t use them, anyway. This is evident in Ahmedabad, where citizens still defecate along the rail tracks, even though the state has provided more toilets. The state of Gujarat found a unique solution to this. It started paying children to use the toilets. Children were issued a card where each visit was recorded. At the end of the month, they received one rupee for each day they used the toilet.[3]

However, several villages located in Nadia district in the state of West Bengal had other ideas. They created a “wall of shame,” where they wrote the names of people caught defecating in public. To complete the embarrassment, they added their pictures. Anyone whose name appeared on the wall was also barred from receiving government benefits. 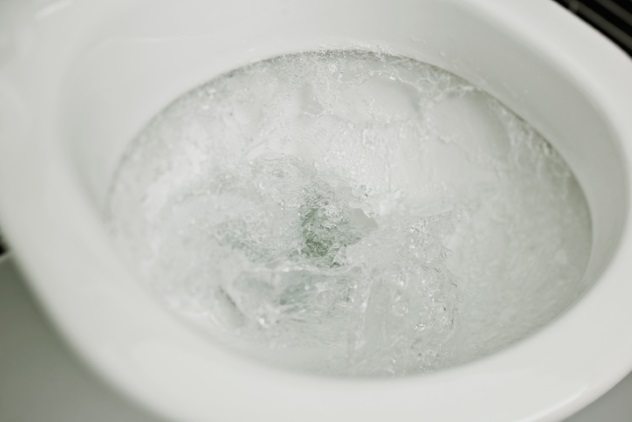 Bulawayo is the second-largest city in Zimbabwe. Two decades ago, the city experienced a drought that led to a water shortage. The result was that citizens weren’t getting enough water to do everything, including flushing their toilets. Not flushing the toilets with enough water also meant that feces were not reaching the sewers. Rather, they stuck in the pipes and caused blockages. To wash the feces blocking the pipes, the government ordered everyone to flush their toilets at the same time.

The city had a similar problem in 2012, when it suffered another drought. Water was rationed and was only available for four days a week. The result, of course, was that people were not using enough water to flush their toilets on days that water was not available. To prevent a blockage, the government again ordered the one million citizens living in the city to simultaneously flush their toilets at 7:30 PM. The simultaneous flushing continued every Monday and Thursday for several weeks until the city’s water supply was normalized.[4] 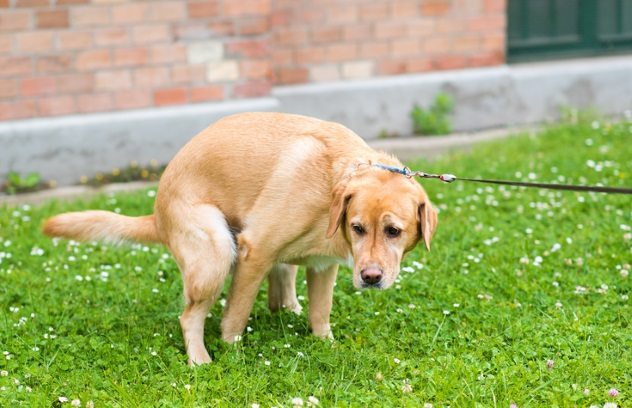 Dog poop is a problem in Spain, where some dog owners have simply refused to clean up after their dogs. Several cities, including Guadalajara, Tarragona, Huelva, and Malaga, have proposed a bizarre solution to this: DNA tests.

The cities agreed to create databases for all dogs living in their vicinity. Thereafter, they would run DNA tests on any dog poop found in public and run a match against their database to find the owner. In Guadalajara, guilty dog owners are fined €250 and made to pay for the DNA test.

The city of Brunete had a more hilarious solution, though. Instead of organizing DNA tests, they just packed the poop and mailed it back to the owner of the dog in a box labeled “Lost Property.” To get the identity of erring dog owners, the city organized a group of 20 volunteers. The volunteers approached offenders and started conversations to get the name of the dog.

Once done, they compared the name and breed of the dog against the city’s database to find the owner’s address. A total of 147 “lost properties” were mailed to their real owners within one week in February 2013. At the same time, the percentage of people not cleaning after their dogs fell by 70.[5] 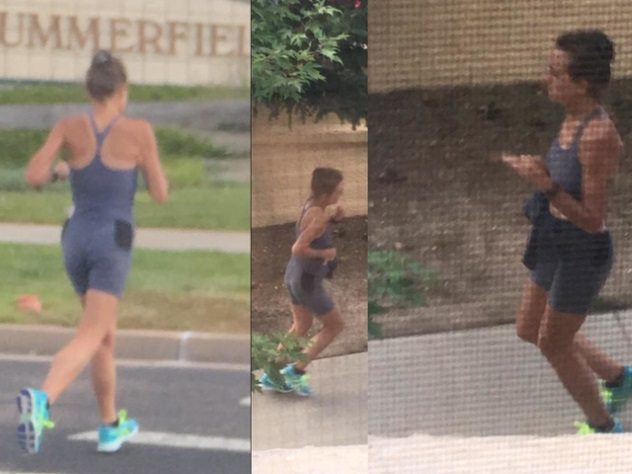 Colorado Springs experienced a unique poop problem in 2017 when a female jogger kept pooping by the roadside. This continued for almost two months, with the jogger dropping by to defecate at least once a week. Neighbors called her the “Mad Pooper.” Someone took pictures of the woman, but no one could identify her. She refused to turn herself in, either, even when toilet paper manufacturer Charmin promised her a year’s supply of free toilet paper.[6]

The Colorado Springs Police Department received so many calls inquiring about the identity of the Pooper that they stopped taking the calls. The few times they did, they just told the caller to stop calling. A man made a prank video on YouTube claiming to be the spokesperson of the Mad Pooper. He said her name was Shirley and that she suffered from a brain disorder after a gender reassignment surgery. 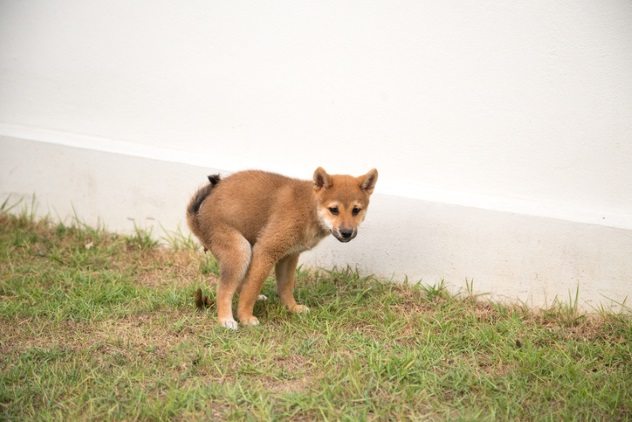 New Taipei City is another place with a dog poop problem. Instead of running DNA tests or mailing the poop back to the dog owners like the Spaniards, the city ran a lottery. And there was only one way to get tickets: dog poop.

One bag of poop was worth one ticket. Some 4,000 people turned in 14,500 bags of poop during the lottery. The winner received a $2,200 gold bar. Four other winners got gold bars worth hundreds of dollars, and 80 others won complimentary prizes.

Taipei’s dog poop problem went down 50 percent while the lottery lasted. It was so successful that the city ran another lottery. However, city officials could not confirm whether it was the dog owners who were turning in the poop or random citizens who just wanted to try their luck.[7] 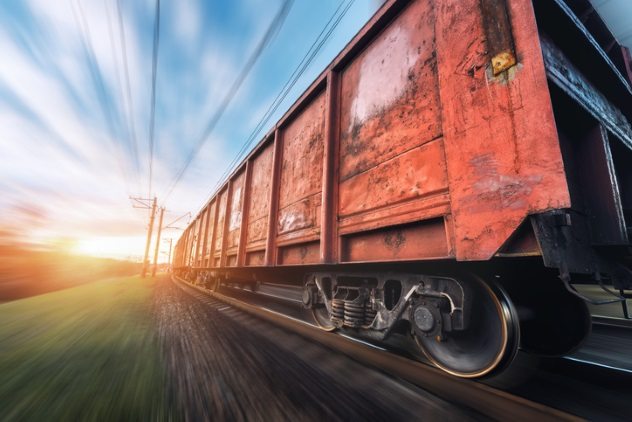 The city of New York is the place actually experiencing the poop problem, but we needed to put Alabama in the title because New York effectively made its poop problem Alabama’s. In the past, New York dumped its treated sewage into the ocean. But that later became unfeasible, so the city started sending its feces to Alabama.

Every week, New York City sends shipments of poop (referred to as “biosolids”) by train and truck to Alabama. Residents of Alabama, especially Birmingham, West Jefferson, and Parrish—where the trucks and trains pass—are complaining. They say the poop smells like rotten animals and quickly becomes a problem when the wind blows the stench at them.

Heather Hall, the mayor of Parrish, complained that citizens could no longer sit on their porch or go outside because of the horrible stench from the poop trucks. Then there are the flies and fears of the poop contaminating the town’s water supply.[8]

2 US Military Bases In Iraq And Afghanistan 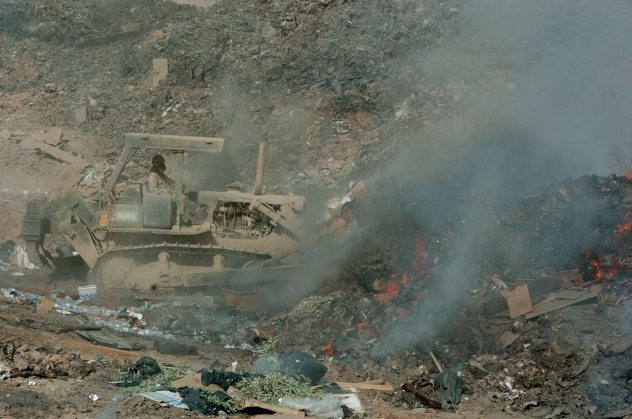 The US military has depended on open burn pits to incinerate the waste at its bases in Iraq and Afghanistan. Some of these burn pits are 10 acres wide and are used to burn just about anything you can think of: plastic, electronics, metal, rubber, batteries, explosives, ammo, poop, and human body parts. The military never intended to depend on these pits. They were supposed to be temporary solutions until incinerators were brought in. However, that never happened.

The result is that soldiers are returning from these countries with health issues like asthma, chronic bronchitis, constrictive bronchiolitis, and amyotrophic lateral sclerosis (Lou Gehrig’s disease). Worse is that the Department of Defense keeps denying that the burn pits have adverse health effects on troops, even though it knows it does.[9] 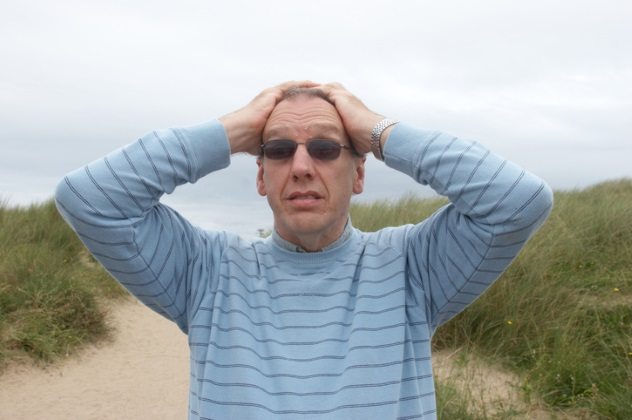 Public pooping remains a big problem for residents of Old Orchard Beach, Maine. This time, it’s not just human or dog poop but both. Visitors to the beach are fond of defecating on the sand or straight into the ocean. One woman complained that between ten and 15 people pooped right beside her home everyday.

There are bathrooms around the beach, but they are located at considerable distances away. Hoping to solve this problem, the town installed portable toilets closer to the beach. Even if people start using the portable toilets, the town will still need to find a solution for dog owners who never clean their dog poop on the beach.[10]

Read more fecal facts on 10 Secrets Of Ancient Feces and 10 Foods Made From Poop, Vomit, Or Spit. Would You Eat Them?.