What do animals do? That’s a pretty broad question, but there are plenty of broad answers. They eat, drink, mate, and so on. And sometimes, they make art.

You might be surprised how many animals have mastered artistic skills, from painting and photography to dance and collage. Given the opportunity, animals seem to enjoy expressing themselves through as many different mediums as we do. Here are some of the coolest examples.

Dagger is a Black Labrador/Golden Retriever cross that was destined to become an assistance dog for Canine Companions for Independence (CCI). While he was able to complete much of the complex training to qualify for the role, he had some difficulties with fear over some of the tasks and couldn’t quite graduate. He was adopted by artist Yvonne Dagger, who welcomed the dog into her studio, where he watched her paint.

Because of his previous training, Dagger was used to learning how to observe and master human skills. One day, Yvonne gave him a paintbrush, and Dagger set to work creating his own art. He went on to sell more than 150 paintings and raise over $10,000 for charities. But he didn’t stop there—not only is Dagger “DogVinci” still painting, but he has also trained to be a certified therapy dog for Therapy Dogs International. Now he inspires, influences, and comforts people all over the world.[1]

Top-class racehorse Metro Meteor was adopted by artist Ron Krajewski and his wife Wendy after he suffered serious knee injuries while on the racetrack. Metro was born with a degenerative condition that would permanently affect his knees, even though he wasn’t racing anymore. Vets advised that it was terminal. Metro was given a likely two years to live, so his owners wanted to make him as happy as possible. Ron noticed that Metro liked to bob his head up and down, and he had the idea that the horse might like to paint with a paintbrush in his mouth.

As it happened, Metro absolutely loved to paint. He became the best-selling artist at Gallery 30 in Gettysburg, Pennsylvania, and made enough money to pay for a pioneering treatment for his knee condition. It worked, and Metro is now able to spend a long and contented life at the easel. He has also given other horses like himself a chance to have a better retirement, donating over $45,000 from the proceeds of his work to a charity that helps racehorses find good homes.[2]

8 The Painting Elephants Of Thailand 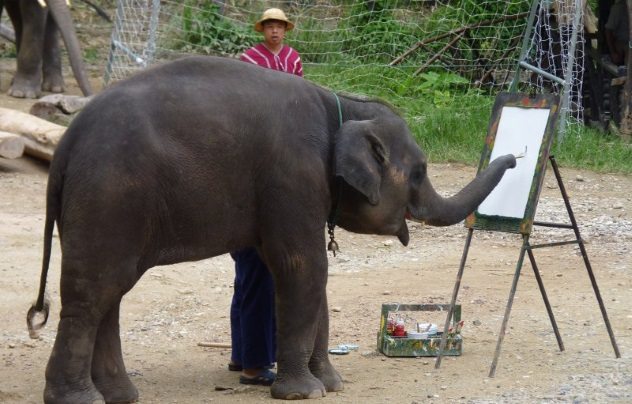 The Elephant Art Gallery sells artwork painted by trained elephant artists that live at the Thai Elephant Conservation Center in Thailand. Many of the elephants at the center are rescued or orphaned. The elephants are given adapted brushes so that they can paint without the brush slipping too far down their trunk.[3] Elephants have more than 40,000 muscles in their trunks, giving them incredible control over their movement. This means that the elephants are able to paint detailed pictures of trees, leaves, and flowers as well as colorful abstracts.

There has been speculation that the methods of teaching the elephants to paint may be cruel or unethical, drawing criticism from conservation and animal welfare outlets. Whether this is true is not clear. 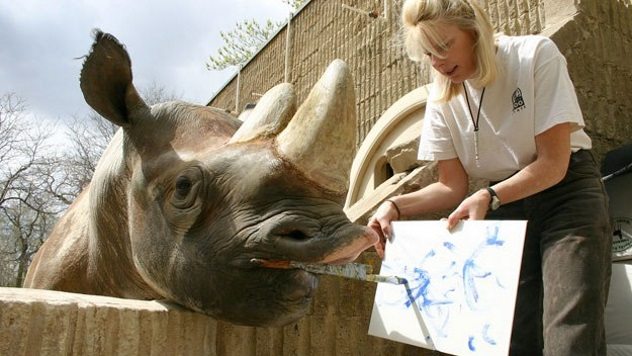 Mshindi was a black rhino at Denver Zoo that was euthanized in September 2015, as he was suffering from worsening foot problems and complications of old age. While he was alive, he was a prolific artist, using his mouth to hold a brush and create abstracts on canvas. His keeper, Christine Bobko, trained him to do this, along with other actions such as fetching sticks and sitting on command. Mshindi took a great interest in learning new things.

The name Mshindi means “warrior” in Swahili.[4] Who would have guessed that this powerful creature could have become an artist as well?

Heartography, Photography Straight From the Heart

An experiment by Nikon allowed a lucky dog called Grizzler to become a photographer. The camera was strapped to Grizzler’s chest and had a sensor that monitored the dog’s heart rate. When Grizzler got excited by something he was seeing, his heart rate would inevitably rise. Whenever Grizzler’s heart rate was above 119 beats per minute, it would trigger the shutter release and take a photo.

Grizzler had an eclectic portfolio to show for his efforts, including pictures of cats, other dogs, plants, and even mushrooms.[5]

An orangutan at Woodland Park Zoo in Seattle named Towan found enjoyment in art throughout his 48-year life. Towan was adverse to captivity and attempted to escape the zoo several times. Of course, that wouldn’t have been very good for him if he had succeeded, because the environment outside the zoo would not have been safe for him. However, it showed he was very intelligent and imaginative.

Towan was given a sketch pad and used mixed media to create beautiful abstract pictures. He utilized tools such as toothbrushes, crayons, and chalk to get the effects he liked. He died in March 2016 due to complications from a medical procedure.[6]

Jen DeGroot is a marine mammalogist at the Oregon Coast Aquarium in Newport, Oregon. She taught a sea lion named Lea to paint to help her avoid boredom, and Lea took to it very well. Max, another sea lion, learned how to paint in this way as well. These “flipper prints” were sold to raise further funds for the animals, and Lea and Max were featured in a book called Fur in My Paint.

The artwork has been very popular and seemed to encourage people to take more interest in the sea lions, even if they weren’t very interested in them before.[7]

Beluga whales living in the Hakkeijima Sea Paradise aquarium in Yokohama, Japan, were given cleverly designed “beluga brushes” so that they could have a chance to paint pictures from their pool. The belugas held the brushes in their mouths and were challenged to copy images created by human customers of an art program hosted by the aquarium.

Belugas might be referred to as white whales, but their paintings are very colorful and unique. Their keepers have to dip the brushes into the paint for them and set up an easel that is suspended above the water, but the belugas do all the rest of the work.[8] 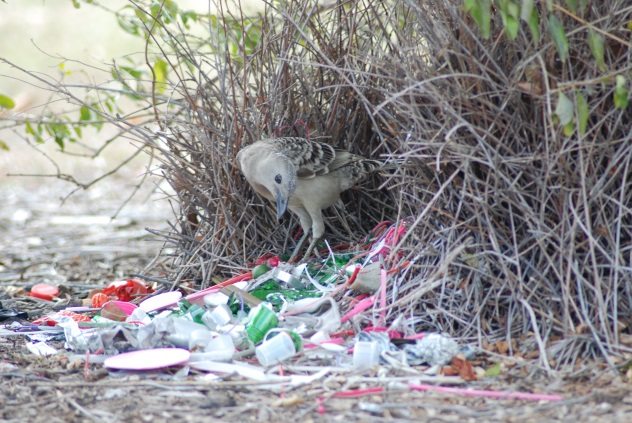 One of the most artistic bird species has to be the bowerbird. To impress the females, the males build a display made out of a collection of objects they have found. These can be all kinds of strange trinkets, from ribbons and pieces of glass to coins and photographs.

The males carefully acquire and arrange all of these objects around a construction of interwoven sticks and grasses. Interestingly, this is entirely separate from building a nest. The display that the male bowerbird creates is purely for aesthetic purposes.[9]

1 And So Many Others 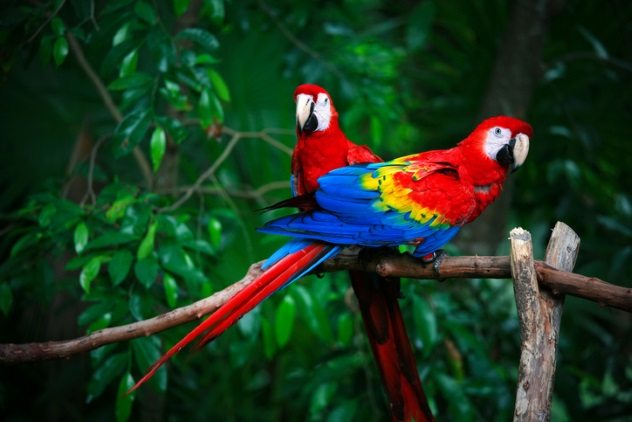 We often think that humans are the only true artists, but there are thousands of animals who naturally show all kinds of artistry. Parrots and other birds are brilliant mimics, to the point that they have even been key players in criminal investigations.[10] Flamingos perform collective dances, and spiders weave intricate webs.

Many animals are already works of art in themselves, such as butterflies, with their brilliant colors and shapes, or oysters, which manufacture pearls in their shells. The animal kingdom is full of extraordinary art and craft if you know where to look.

I write about the weird and wonderful world of wildlife and animals and hope to inspire people to keep learning and discovering how we are all involved in the nature of the world.