Animals can often be trained to do the basics: sit, stay, roll over, and fetch. And then there are the overachievers. These animals set and break world records along with expectations for their species.

Sometimes, animals can even beat us at our own game, becoming successful in ways many humans never could. Here are 10 impressive accomplishments achieved by the animal community.

10 Mice That Surf And Skateboard 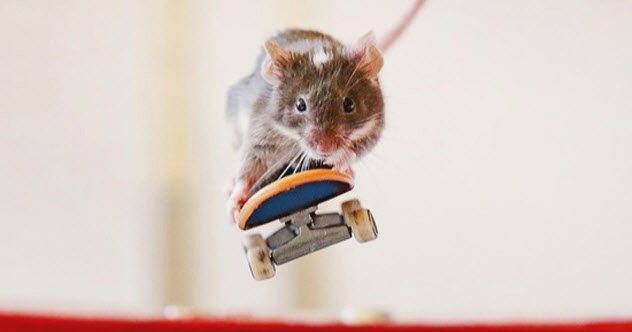 Shane Willmott lives on the Gold Coast in Australia where he and his pet mice spend the summers surfing the waves.

As a teenager more than 30 years ago, Willmott began teaching his pet mice to surf. Inspiration struck while he was visiting the beach with some friends. He noticed the formation of tiny waves near the shore and wished he were small enough to ride them. Then he realized a mouse would be the perfect-sized creature to take advantage of the incredible miniature surfing conditions.

Willmott’s training process begins in his bathtub, where his mice learn to balance on the boards. Then the critters progress to Willmott’s backyard pool, where they become accustomed to movement in water by being pulled behind a remote-controlled boat. After the mice have mastered being towed in the pool, they are ready for the beach.[1]

During winter, the water is too cold for Willmott’s mice. Instead, they skateboard in the park Willmott built for them in his backyard. The mice ride down ramps and do impressive tricks, such as jumping through a ring of fire.

Rescue dogs at an animal shelter in New Zealand are surprisingly talented. They learned how to drive a car.

The Auckland Society for the Prevention of Cruelty to Animals wanted to show the world that some of their canine residents could be trained to do something incredible. Their goal was to increase adoptions by demonstrating the potential that shelter dogs have. After eight weeks of preparation, Porter and Monty were able to drive a specially outfitted Mini Countryman.

Using the modified car, the dogs are capable of turning the key to start the engine, using their paws to push brake and gas pedals, and steering the wheel.

Their success was aired on television in December 2012. Monty, a giant schnauzer, drove down the straight portion of the track entirely on his own. Porter, a bearded collie mix, maneuvered the car around a curve in the track with only a slight swerve onto the grass.[2] 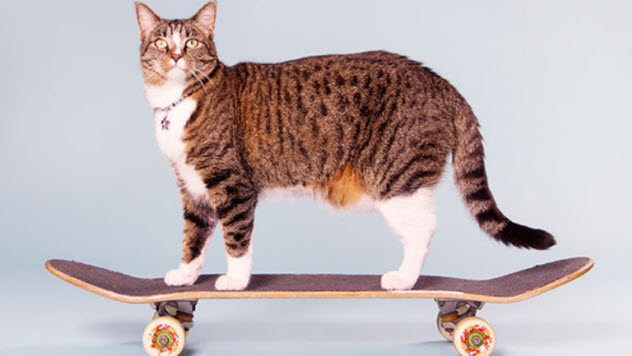 Didga the cat has learned more tricks than most dogs could even come close to attempting. Though cats are notoriously hard to train, Didga holds the Guinness World Record for most tricks performed by a cat in one minute.

Didga originally performed 20 individual tricks in one minute. Soon after, she beat her own record with 24 tricks. Her skills included rolling over and performing a jump over a bar while riding a skateboard.[3]

Her owner, Robert Dollwett, adopted her from an animal shelter. Dollwett says that Didga began performing all sorts of tricks to grab his attention when he showed up to choose a new pet. It worked, and Dollwett took her home and began working with her to advance her natural talents.

Cats do not typically enjoy water, but Digda swims and surfs. She can skateboard and do gymnastics, too. Perhaps most impressively and most conveniently for her owner, Digda also uses a human toilet. She even flushes after she finishes.

7 Pigeons Count As Well As Primates 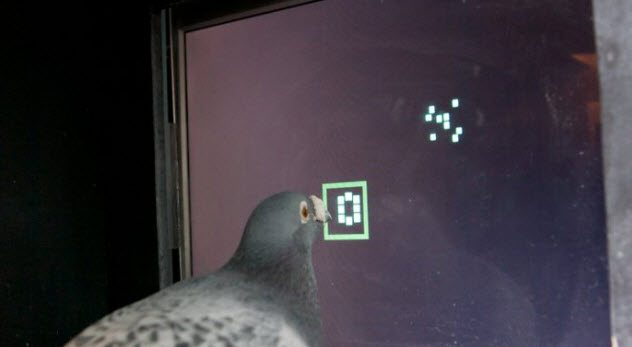 Although many species in the animal kingdom can discern one from many, ordinal numbers have largely been a primate’s game. The ability to count has long been associated with chimpanzees and gorillas, but birds have proven to be good with numbers as well. Pigeons can count as well as rhesus monkeys.

Pigeons have great eyesight and are extremely easy to train. A team of researchers from New Zealand wanted to find out if these traits could be applied to numbers.

They began by teaching the pigeons to count to three. Using a touch screen that showed images of one, two, and three shapes, the pigeons were required to peck at the images in order from smallest to greatest before they received a treat.

After mastering the basics, the birds were shown images that contained between one and nine items. Without additional training, the pigeons exhibited an impressive ability to peck at the numerical values in the right order.[4]

Painting Bunny- Bini the Bunny does art! Animals can paint

Struggling artists know how hard it is to get paid for their work. But in a tough industry, Bini, a six-year-old Holland Lop rabbit, has proven to be a success.

Bini paints by holding a brush in his mouth. He has created over 300 paintings. According to Bini’s website, it takes the rabbit between 40 and 90 minutes to complete a canvas. Bini’s masterpieces are in high demand and sell for up to $300 each.

Bini’s talents are not limited to his work on canvas. He is also capable of styling and combing hair, playing arcade games, and shooting hoops. Bini holds the Guinness World Record for most basketball slam dunks in one minute by a rabbit. He set the record with seven dunks in 2017.[5]

These bees taught their friends to play bee soccer

A team of biologists at Queen Mary University of London taught bumblebees to play soccer.

The researchers led an experiment to see if the insects could learn to move a ball into a target area. The ball was about half the size of the bees. The goal of the experiment was to present the bees with a task they would never encounter in nature and see if they possessed the cognitive abilities required to accomplish it.

Team Bumblebee blew the researchers away. The insects learned to successfully “score a goal” in a variety of ways. Some of the bees figured out how to get the ball into the target area without any demonstration, and some learned by watching the ball move on its own. But the most successful bees observed their peers complete the task first and then learned to perform the same action more efficiently.[6]

The bees’ success proved that the insects have flexible cognitive abilities and are capable of complex thought processing.

Most skips by a dog and a person – Guinness World Records

Purin and her owner, Makoto Kumagai, live in Japan. In May 2016, they set the Guinness World Record for most skips by a dog and a person in one minute with 51 jumps. The jump-roping beagle and her human partner upped the ante in January 2017 when they increased the record to 58 jumps.

Purin also holds two other Guinness World Records. She set the record for most balls caught by a dog with the paws in one minute in 2015. Purin posed in front of a goal while she caught 14 mini soccer balls.[7]

She also holds the world record for the fastest time a dog has traveled 10 meters (33 ft) on a ball. Purin achieved that title in March 2016 with a time of 10.39 seconds, beating her earlier world record of 11.9 seconds.

Purin also skateboards, goes sledding with her family, rides a bike, and does kendo, a Japanese martial art similar to fencing. 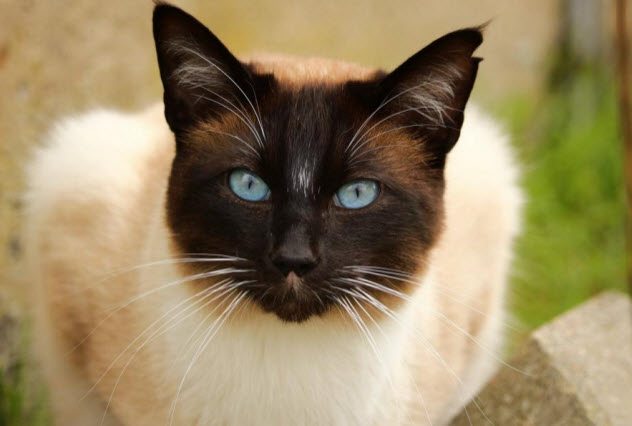 Jack H. Hetherington and F.D.C. Willard are the coauthors of an influential academic physics paper. The paper, which explored atomic behavior at different temperatures, was published in Physical Review Letters, a highly respected journal, in 1975.

Hetherington wrote the paper himself. However, he used the pronoun “we” throughout his work, something he did not realize until he had typed everything up. The physics journal would only allow the use of “we” if the paper had been written by more than one author. Since Hetherington’s work had been done on a typewriter, he would have had to redo the entire paper to change “we” to “I.” Instead, he decided to add a second author to justify his use of the plural pronoun.

Hetherington listed his Siamese cat, Chester, as his coauthor. To disguise Chester’s feline nature, Hetherington called him F.D.C. Willard. F.D.C. stood for “Felis domesticus, Chester,” and “Willard” was the name of Chester’s father. The physics journal assumed that Hetherington had authored his paper with one of his colleagues at Michigan State.[8]

After the paper was published, the truth about Hetherington’s whiskered coauthor was revealed. Most people, including Hetherington’s colleagues and supervisors, found the incident humorous.

Chester’s career as a published cat did not end there. F.D.C. Willard was also listed as the sole author of a 1980 paper published in La Recherche, a French science magazine.

2 Elephants That Landed A Record Deal

The Elephant Orchestra of Thailand

The Thai Elephant Orchestra was created at a conservation center in Thailand that houses retired work animals. Since elephants have been shown to enjoy painting and other artistic endeavors, it was believed that they also might enjoy playing instruments.

The founders of the orchestra designed drums, xylophones, and harmonicas that would suit the elephants. They now have 22 modified instruments that are oversized and nearly indestructible. Once the elephants were shown how an instrument worked, they were happy to play it without any additional coaxing, such as reward treats.

The music created by the elephants has been compared to that which is heard in Buddhist temples. The orchestra has produced three albums.[9]

1 The Monkey Named ‘Person Of The Year’ 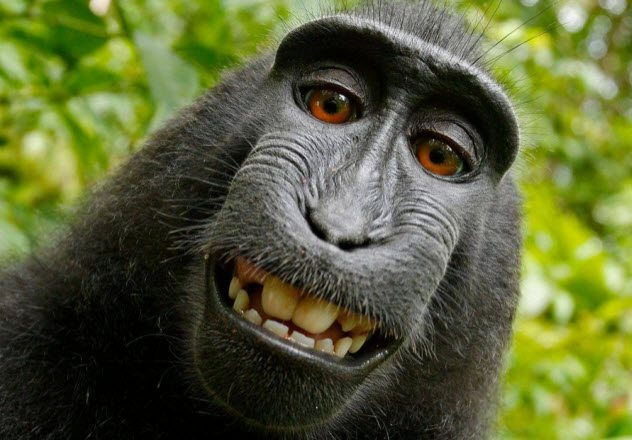 In 2011, British wildlife photographer David Slater was taking pictures of a troop of macaques in Indonesia. One photo, a close-up of a macaque named Naruto grinning into the camera, became famous. The image was captured by Naruto himself. Slater describes teaching the monkeys to press the shutter on the camera while looking into the lens.

Slater’s macaque photos, especially Naruto’s selfie, were incredibly popular. In 2014, Slater noticed that a blog and Wikipedia were both using the photo without his permission. He asked them to remove the image or pay for it. Both websites refused. Wikipedia argued that Slater did not own the copyright to the photo because the monkey had snapped the shot, not Slater.

In 2015, PETA sued Slater on Naruto’s behalf, claiming the macaque deserved to be the declared owner of the photograph. It was the first lawsuit that sought to declare a nonhuman animal as the owner of property.[10]

In 2016, a judge ruled against PETA, stating that animals are not covered by the Copyright Act. PETA appealed the ruling, but the case was settled out of court when Slater agreed to donate 25 percent of any future earnings from Naruto’s photo to charities that protect crested macaques.

Seeking to recognize Naruto as an individual rather than “something,” PETA named the macaque “Person of the Year” in 2017.

Read about more amazing animal accomplishments on 10 Ways Animals Are Geniuses and 10 Cases Of Animals Saving Humans From Certain Death.