Fossils are all we have to prove that dinosaurs ever existed. There are two types of fossils. The first are body parts like bones and teeth that we often associate with fossils today. The second are traces like teeth marks, footprints, and excreta.

Over the years, we have unearthed some really interesting fossils frozen in time. We say “frozen in time” because the fossil is usually enough to let us know what the dinosaur was doing at a certain time in its life or at the time of death. Others allowed us to know exactly how the dinosaur looked during its lifetime. 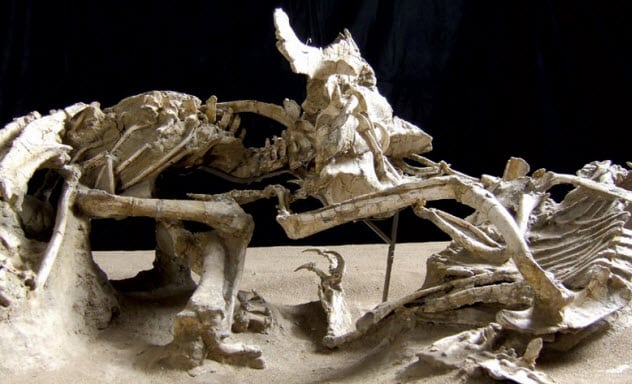 In the lawless wild, it is not news that animals kill and eat one another. Dinosaurs were guilty of this, too. In 1971, researchers in the Gobi Desert in Mongolia unearthed the remains of two dinosaurs—one trying to kill the other.

However, there was no winner. Both dinosaurs either killed themselves or died after a sand dune collapsed on them, preserving their fossils in a battle pose that was unearthed 74 million years later.

Researchers cannot verify what happened next but consider it to be one of two options. The dinosaurs were either killed in an instant after a heavy rain swept a sand dune on them. Alternatively, both dinosaurs remained locked in the position until the Protoceratops bled to death from its neck injury. The Velociraptor was then crushed to death by the weight of the Protoceratops.[1]

9 T. rex Goes After A Sauropod 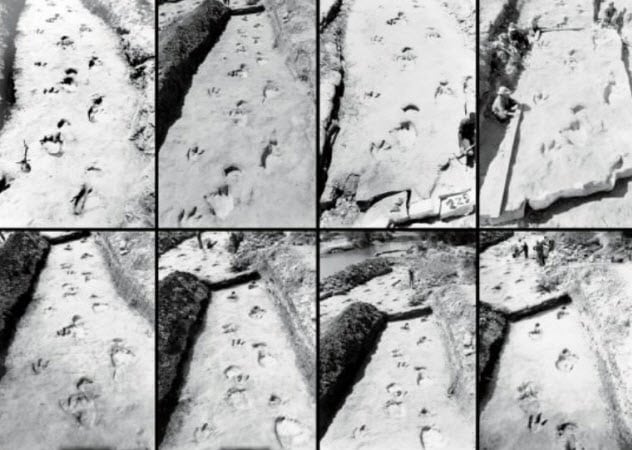 In 1938, Roland Bird, a researcher at the American Museum of Natural History, found some incredibly interesting dinosaur fossils: the 111-million-year-old footprints of a sauropod and a T. rex. Both tracks ran side by side and even overlapped in some places. Researchers cannot confirm what actually happened, but they have some interesting guesses.

8 The Hunter That Became The Hunted 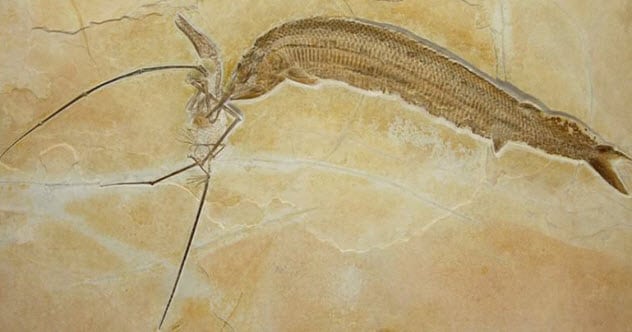 Birds like ospreys and fish eagles can live exclusively on fish they snatch out of the water. But they are not the first flying creatures to feed on fish. Flight-capable animals have been hunting fish ever since they learned to fly. Enter the pterosaur.

The pterosaur was the first animal to fly. It was not a bird but a reptile closely related to dinosaurs and crocodiles.

Pterosaurs, reptiles, and dinosaurs are all categorized under a group called archosaurs. In 2009, researchers recovered the 155-million-year-old fossils of a pterosaur, Aspidorhynchus (an extinct genus of fish), and a small fish in Solnhofen, Germany.

From the fossils’ unusual positions, researchers realized that they had uncovered an unusual hunting scene. The pterosaur had been going about its daily business of grabbing fish from the water when it was caught by an Aspidorhynchus. The Aspidorhynchus grabbed it by its wing and pulled it underwater.

There, the Aspidorhynchus tried to swallow the pterosaur, which had yet to completely swallow the small fish it had caught earlier. The hunting session would prove disastrous for all parties involved.[3] 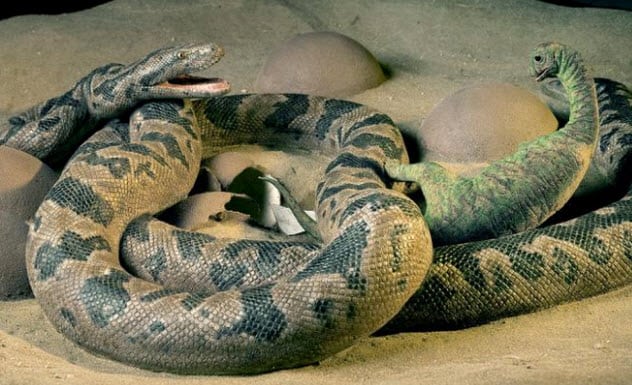 Due to their small size, unguarded dinosaur eggs and hatchlings were always at risk of being gobbled up by the adults of smaller animals. In 1984, researchers dug up the 67-million-year-old fossil of a Sanajeh indicus (an extinct type of snake) that was about to swallow a dinosaur hatchling. The discovery was made in Gujarat, India.

Researchers cannot confirm the type of dinosaur involved, but they know it belongs to a group of long-necked herbivores called sauropods. They suspect that it was a titanosaur, but that is unconfirmed. No one paid close attention to the fossils, and they were even mislabeled until 2004 when researchers decided to take a second look.

The 3.5-meter-long (11.5 ft) Sanajeh had entered the sauropod nest where it found three eggs. One was hatching at that time. The hatchling was a 0.5-meter-long (1.6 ft) sauropod that had yet to completely leave its shell.[4]

The Sanajeh took position and was about to end the sauropod’s short life when the nest was suddenly overwhelmed by mud, killing and fossilizing the hatchling, snake, and eggs. Researchers suspect that the mud was caused by heavy rains. 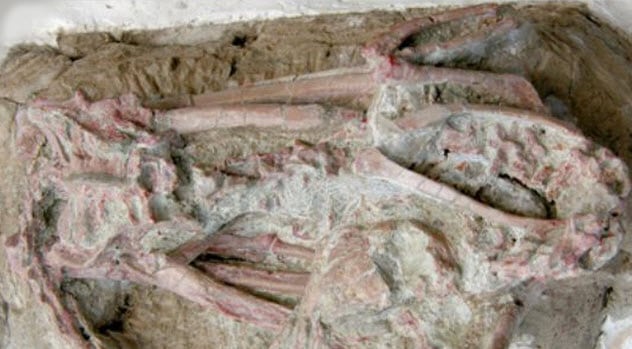 Our knowledge of dinosaurs remains limited even after exhuming hundreds of their fossilized remains. For instance, we do not know how the great T. rex slept. And it is unlikely that we will ever know unless we find the fossilized remains of a sleeping T. rex, which might never happen as unearthed dinosaur fossils are almost always found in the death position. Their tails are pointed upward, and their necks are positioned as if they are trying to look over their backs.

However, several years ago, we discovered the fossilized remains of a dinosaur in the sleeping position. This was announced by researchers Xing Xu and Mark Norell in 2004. The animal, which belongs to a family of two-legged dinosaurs called troodontids, was found curled up like a sleeping bird somewhere in China. It was named Mei long (“sleeping dragon”) for this reason.

The fossil is over 140 million years old. Its posture supports the theory that birds and dinosaurs have the same ancestors. It also suggests that dinosaurs were warm-blooded creatures. Researchers believe that the Mei long was buried alive after it was covered with volcanic sediment. Alternatively, it could have been killed by carbon monoxide poisoning before it was covered with volcanic sediment.

To confirm the discovery was not a random coincidence, researchers discovered the remains of another Mei long and a third unnamed dinosaur in the same sleeping position. The unnamed dinosaur was not a Mei long, but it belonged to the same family (troodontids) as the Mei long.[5] 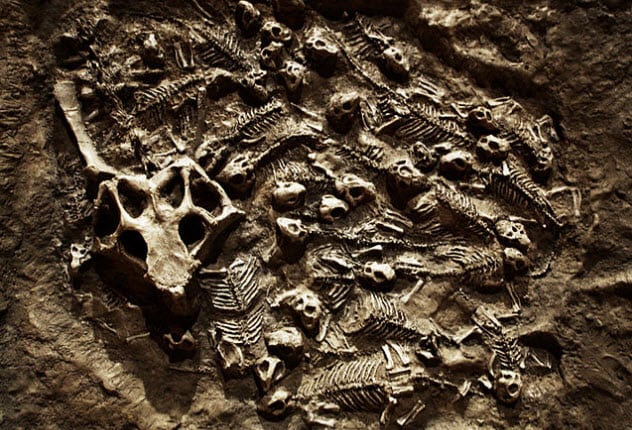 In 2003, we unearthed the remains of 35 plant-eating dinosaurs that had been dead for over 125 million years. The dinosaurs are from the Psittacosaurus genus, although they can also be called the “parrot lizard.”

A fully grown adult Psittacosaurus was 1 meter (3 ft) tall, walked on two legs, laid eggs, had a parrotlike beak, and fed on fruits. However, in this instance, we had just one adult and 34 younger dinosaurs believed to be its offspring. All fossils were found in an upright position, indicating that they had been killed in an instant.[6]

Researchers are unsure about their cause of death. But some theories are that the creatures were killed by a flood, volcanic eruption, or the unexpected collapse of their underground home.

The discovery suggested that dinosaurs like the Psittacosaurus cared for their young after birth, which is rare among reptiles but common with birds. This is another reason to believe that dinosaurs are closer to birds than crocodiles.

4 The Mud Dragon That Got Stuck In Mud 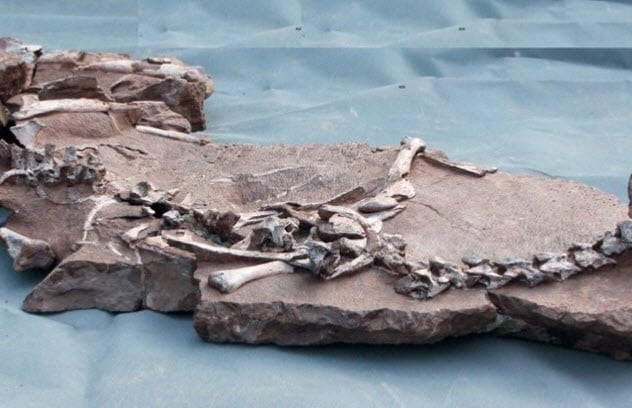 We mentioned earlier that dinosaur fossils are often discovered in the death pose. However, the fossil of a mud dragon found in Ganzhou, China, had a unique death pose—one that clearly described its agony before it died. It showed the dinosaur’s desperate attempt to get itself out of the mud. The creature stretched its wings and neck as far as it could, but it was to no avail. It continued stretching as life slowly crept out of it.

The mud dragon was an oviraptorosaur, a two-legged, birdlike dinosaur with feathers, a crest, a beak, and a toothless mouth. Even its name, mud dragon—or scientifically, Tongtianlong limosus (“muddy dragon on the road to heaven”)—is in reference to its death pose. Researchers believe that it died 66–72 million years ago.[7]

The mud dragon’s fossil is very important to science because the creature died off around the same time as the infamous asteroid killed off most dinosaurs about 66 million years ago. The fossil could provide more insight into what the world looked like at the time that the asteroid crashed on Earth.

Interestingly, the fossil was almost destroyed before it was found by chance. Construction workers in Ganzhou had been using dynamite to break the ground for a project when the explosion inadvertently exposed the mud dragon’s fossil. 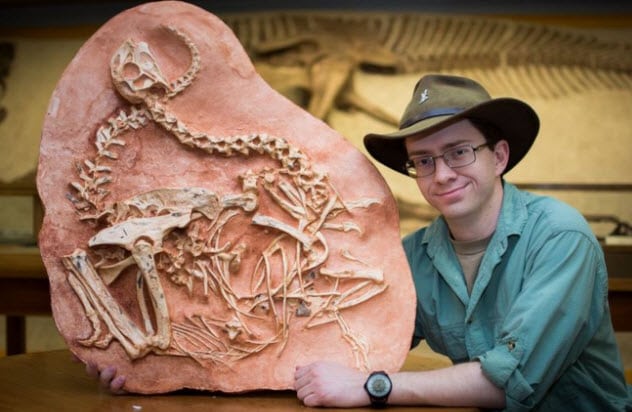 “Romeo and Juliet” is the name of the 75-million-year-old Oviraptor fossils unearthed in the Gobi Desert in Mongolia. The fossils of the two-legged, birdlike dinosaurs were found side by side. Their name refers to Shakespeare’s Romeo and Juliet because the dinosaurs are believed to have been lovers. From observation, researchers deduced that the male had just wooed the female before they were killed in an instant.

Researchers were able to distinguish the male from the female because he had larger tail bones, which are evidence of a longer tail. Oviraptor was incapable of flight, so the male must have used its feathers to attract females just as peacocks do today.

Unable to confirm the cause of the dinosaurs’ sudden deaths, researchers have proposed that the lovers were killed after a sand dune collapsed on them, immortalizing their romance for over 75 million years.[8] 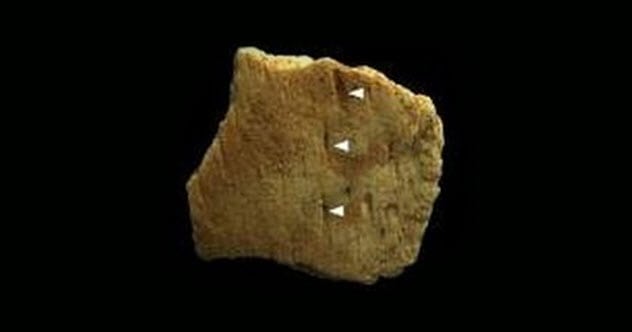 In 2008, researchers in Inner Mongolia, China, unearthed the 70-million-year-old teeth and bones of two dinosaurs. The teeth belonged to either a Velociraptor or a closely related dinosaur while the bones belonged to a Protoceratops.

To be clear, both creatures were small compared to the size we usually associate with dinosaurs. The “larger” Protoceratops was the size of a sheep at 1.4–2.0 meters (4.6–6.5 ft) long. Meanwhile, the Velociraptor was just 1.5 meters (5 ft) long.

This conclusion was reached based on bite marks found on the Protoceratops. The Velociraptor had concentrated on biting bits of meat off the jaws and skull of the Protoceratops so hard that it lost some of its teeth.

Tearing bits of meat off the face of a kill is unusual for a hunter-carnivore as they would often have more than enough meat to feed on. This means that the Velociraptor most likely came across the carcass of an already-dead Protoceratops and just scavenged on what was left.[9] 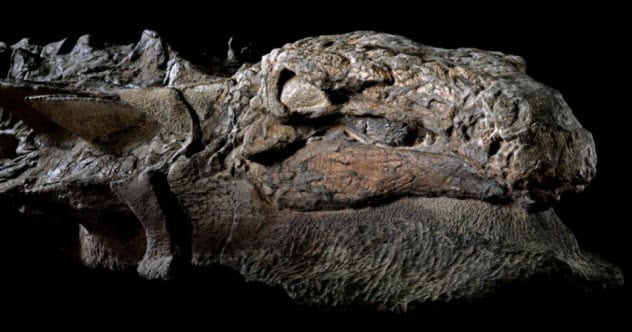 Dinosaur fossils are rarely found intact. Bones, teeth, and, in rare instances, fossilized tissues are usually all the evidence that researchers have to prove the existence of a dinosaur. Even the few fossils that have been found with flesh and feathers rarely resemble what the dinosaurs looked like when they were alive.

So we can imagine how surprised and impressed researchers were when they laid their hands on a 110-million-year-old fossil that looked exactly the way the dinosaur did when it was alive. The fossil was that of a 5.5-meter-long (18 ft) nodosaur. It was found by chance in an Alberta, Canada, mine in 2011.

A nodosaur was the dinosaur equivalent of today’s rhinoceros. They were huge, 1,360-kilogram (3,000 lb) herbivores with thick, armored skins complete with protruding scales and two 51-centimeter-long (20 in) spikes protruding from their shoulders. Most predators learned to keep their distance, as is true with rhinos today.

Researchers believe that the nodosaur fossil remained intact because of some unusual circumstances that occurred after its death. A flood probably swept its bloated and floating carcass into a river where the wind carried it into the ocean.[10]

The nodosaur sank underwater in the ocean where it was covered with mud. Minerals in the mud reacted with the animal’s skin and turned it into a stonelike mass, preserving it.

Read more fascinating facts about dinosaurs on 10 Dinosaurs We’ve Only Recently Discovered and 10 Reasons Real T-Rexes Were Scarier Than Anything In The Movies.