Ask a modern Christian about incarnation and they will tell you that it is when God chose to enter the world as a human. But other religions have not always had such a restricted view of incarnation. A god might choose to become a tree, a rock, a lightning bolt, or even an animal. Incarnation merely means a divinity has taken physical form.

Some animals are considered holy just by their association with a god or goddess. Some are worshiped and cared for by devotees, while others are sacrificed in shocking ways. Here are ten examples of animals that some people believed to have a touch of the divine in them. 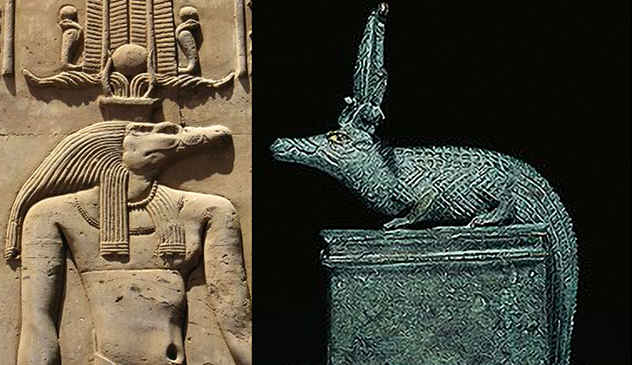 Sobek was a god of Ancient Egypt closely associated with the crocodiles which lived in the river Nile. Statues and paintings of the god show him either as a man with the head of a crocodile or simply as a crocodile.[1] Since the inundations of the Nile were so vital to Egyptian life, it was especially important that Sobek be mollified. While other cities had to make do with offering sacrifices to Sobek in the form of statues, at Arsinoe (called Crocodopolis by the Greeks) worshippers found the god in a living, scaly form.

At the temple of Sobek in Crocodopolis lived a holy crocodile called Petsuchos. The priests of the temple fed the tame and sacred beast by hand. The Greek geographer Strabo describes how offerings were made to Petsuchos. “The priests went up to it; some of them opened its mouth, another put the cake into it, then the meat, and afterwards poured down the honey and milk.” When a Petsuchos died, possibly from an overly rich diet, it would be mummified and given an expensive burial before another Petsuchos was quickly chosen to replace it. 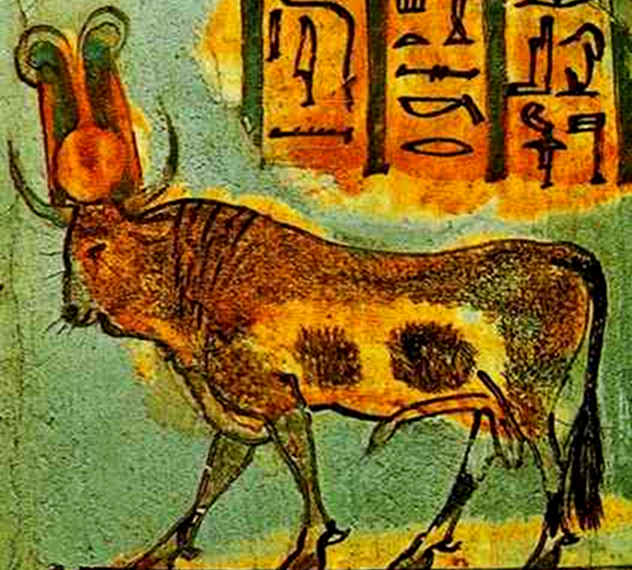 The Egyptian pantheon did not lack for zoomorphic deities with the heads of various animals. The god Apis, however, was wholly bull and wholly god. Apis represented the idea of eternity and universal stability that became more and more important for the seemingly eternal Egyptian civilization.[2] Apis may be eternal, but individual bulls are not. When Apis died its body would be mummified and buried with great ceremony. But how was a new Apis chosen when the previous one died?

The Egyptians believed that the new Apis was conceived when a flash of light struck a cow. The bull born to this cow would have certain distinctive markings. On its otherwise black body, it would have a white diamond on its forehead and the mark of an eagle on its back. Under the tongue would be found a mark like a scarab. Its tail would be especially hairy. Once the god was identified in its new bovine form, it would be carried on a sumptuous boat up the Nile to its new home where a festival would herald its arrival. 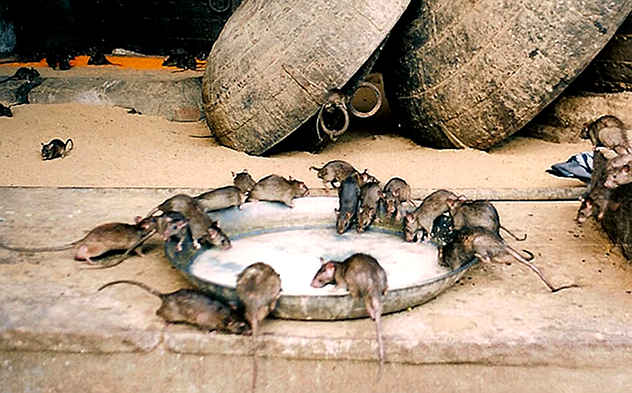 Rats are not what most people would consider divine, but at the Karni Mata temple in India, there are 20,000 of the rodents that are respected as sacred.

In the 15th century, a holy woman called Karni Mata arose who her followers believed to be an incarnation of the warrior goddess Durga. Local rulers used her powers to found forts that could withstand attack and repaid her with temples dedicated in her honor. When a child of her clan died, she asked the god of death that the child be brought back to life. Death refused but promised that any member of her clan who died could return as a rat until being reborn as a human.

Now, at the Kari Mater temple in Rajasthan, the rats are cared for and fed by devotees. The rats are thought to be good luck, and some visitors hope to win their favor by drinking from the rats’ bowls and eating their leftovers.[3] 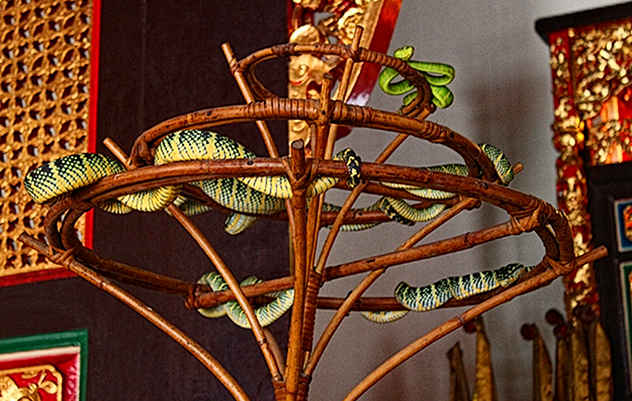 The Temple of the Azure Cloud in Penang, better known as the Snake Temple, was founded in honor of a Buddhist priest Chor Soo Kong who was a famous healer and holy man. So holy was he that instead of driving away venomous vipers he would offer them shelter and safety. When the temple was built, according to legend, snakes started appearing there as if the priest was still there himself to protect them.[4]

The snakes in the temple include deadly pit vipers capable of giving a nasty bite. Signs in the temple warn visitors not to touch the venomous reptiles. To help calm the snakes a vast brazier burns incense in front of the temple. In case the smoke is not enough to soothe the serpents, and the signs not sufficient to warn off visitors, it is said that today the temple snakes have been defanged. 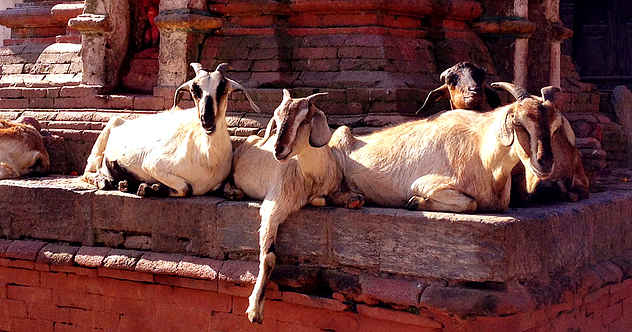 The goats of Khokana seem to have a pretty good deal. As they wander around the Nepalese town, cars and motorbikes have to swerve around them. The goats belong to the goddess Rudrayani, an incarnation of the goddess Durga. The goats are free to wander where they will and graze on any field they come across. Those who hurt the goats on purpose or by accident may find themselves cursed by the goddess.[5] Some say they may even die for mistreating them. This makes what happens to some of the goats even more mysterious.

The sweet life of the holy goats turns rather bitter during the Deopokhari festival. This 900-year old festival sees a young goat captured and thrown into a pond. Waiting for it are several men who will fight for the right to lead a procession in the village. To lead the procession they must be the one who kills the goat with their hands or teeth. Goats are routinely torn apart. A petition has been started to end what some see as a barbaric practice. 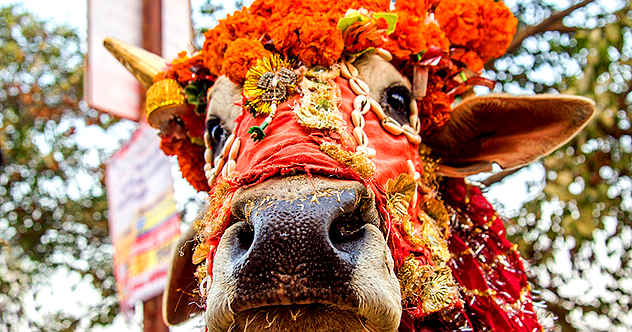 The status of cows in India is one which causes political and sometimes tragic events. Most Indian states do not allow the slaughter of cows, and people have been lynched by mobs who suspect them of eating beef. While many Hindu people recognize the cow as a special creature, there are cases where a cow is thought to be divine itself.

In Muzaffarnagar this year a cow was born with cranial deformities that some thought gave it a human face.[6] The calf died soon after birth, but many flocked to see what was considered a miracle. Some thought the calf was an incarnation of the god Vishnu, while others preferred a more natural explanation—the calf had suffered severe birth defects. The manager of the shelter where the calf was born intended to cremate the animal and erect a temple in its honor. 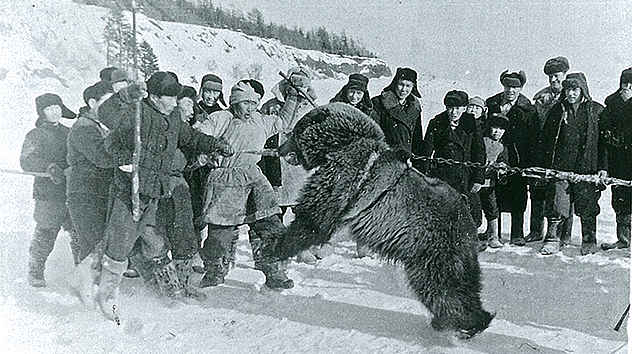 The Nivkh people of eastern Russia are an indigenous group who practice shamanism and hold the bear to be especially sacred. For the Nivkh, the bear is a manifestation of both their ancestors and the gods. To send their prayers directly to the gods they undertake a lengthy ritual involving a bear.

Young bears are captured and raised in the village by local women, treating the bears well and as if they were their own children. After several years of such care, the Bear Festival begins.[7] A feast is set out for the bears to enjoy. Then the bears are dressed in ceremonial clothes and led to posts in a frozen river. Chained there, young men shoot them with arrows until nearly dead. Then one person is granted the right to finish the bears off. The bear is then eaten over several weeks. The bear’s spirit returns to the gods and grants prosperity to the Nivkh. 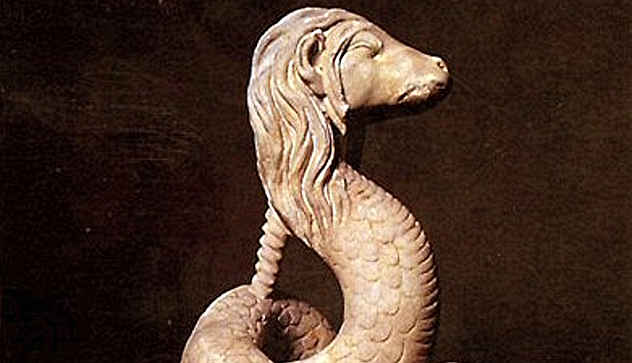 In the second century A.D. a new god arrived on Earth, according to a man named Alexander who had discovered bronze plates which told of the coming of Glycon.[8] Then, while the foundations of a temple were being dug, he snuck in one night and buried a goose egg he had emptied and inserted an infant snake into, sealing the hole with wax. Then, to the amazement of his audience, he dug up the egg and the god Glycon was born, hatched in his hand!

The snake Glycon was supposedly the god of healing, Aesculapius, but statuary and literary evidence show that Glycon had his own following even a century after his epiphany. Statues of Glycon show him as a snake with a glorious head of flowing hair. Some suggest that at first, Glycon was just an ordinary snake wearing a wig or mask, but that later, after the snake died, was replaced entirely by a puppet. 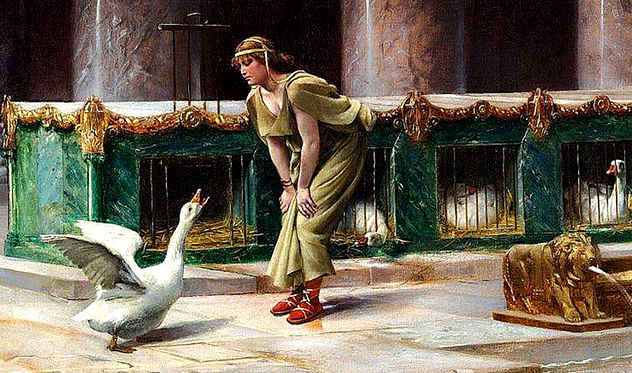 Geese can be scary with their harsh honks and raised wings. They can also deliver a nasty nip if you are not quick enough to feed them. That is why some people use them as guard animals. But the original guard geese were found in Ancient Rome, where they rescued the whole city.

In the early fourth century B.C., the Gauls attacked Rome, defeated her army, and sacked the city. The population of the city retreated to the Capitoline hill for safety. Food supplies began to dwindle, but, despite this, the sacred geese of Juno’s temple were fed well and not turned into food themselves.[9] One night, a group of Gauls attempted to sneak into the Capitol by a hidden path. The human and canine guards all missed the intruders, but the geese honked loudly. Following the sound, the Romans were able to throw back the attackers, and the city was saved. From then on the geese of Juno were thought of as the protectors of the city. 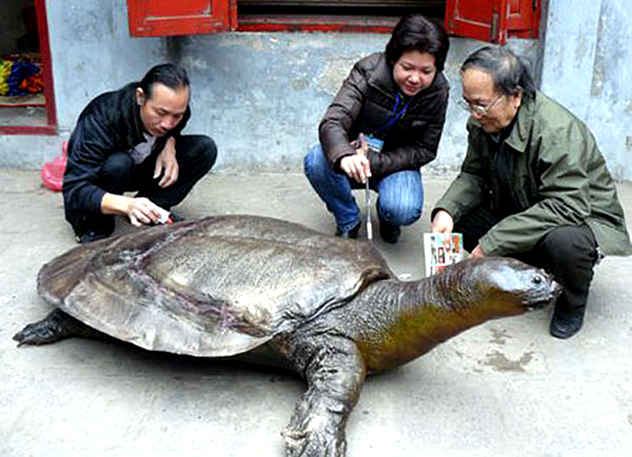 According to Vietnamese folklore, the Emperor was once crossing Hoan Kiem lake when his sword “Heaven’s Will” was snatched from him by a turtle which carried it down into the water. The Emperor had been given the sword by a turtle god, and so he accepted this as another visitation by the deity. Over the centuries, no one could agree if the turtle was still alive as it only appeared sporadically. In 1998 the turtle was caught on film in the lake and assumed to be the sacred turtle returned.

By 2011, the turtle appeared much more frequently. Often it would stick its head above the surface, and raw, open wounds could be seen. It was thought that pollution was harming the sacred animal and infecting its wounds, so attempts were made to clean the lake. The turtle was captured, and vets treated its injuries.

In 2016, the turtle was found dead. Thought by scientists to be one of just four Yangtze giant softshell turtles left alive, it was taken as a bad sign both for believers in its sanctity, and the species itself.[10]

Read more about religious worship on Top 10 Challenging Religious Practices From Across The Globe and 10 Everyday Things Worshiped As Sacred.