Summer means days of sun, swim, and fun. Families all over the world migrate to water parks to combine all three, hopefully avoiding danger. Whether they’re local pools or extreme waterslides, water-based attractions provide no shortage of excitement and entertainment. The International Association of Amusement Parks and Attractions (IAAPA) reports that in the US alone, these parks directly contribute over $50 billion to the economy annually and provide jobs to upwards of 2.3 million people.[1]

Despite nearly all water parks providing a family-friendly atmosphere, there is no doubt that these enjoyable summer destinations also provide attractions to satisfy even the most hardened thrill-seekers. These extreme rides have been known to cause injury or even death. The following list is sure to intensify your thirst for water adventure (pun intended) while also providing relief from the soaring temperatures and scorching sun of the summer season.

Measuring a staggering 51.4 meters (168.6 ft) tall, the dangerous Guinness World Record–holding Verruckt waterslide translates from the German language to “crazy” or “insane.” The waterslide, located at Schlitterbahn in Kansas City, Kansas, was announced late 2012. The ride, delayed by construction complications, eventually opened to the masses at the end of July 2014. The ride was designed by the co-owner of the water park, Jeff Henry, to accommodate three people in an adventure that plummets 17 stories downward at speeds of up to 100 kilometers per hour (60 mph). The spectacular slide is taller than both Niagara Falls and the Statue of Liberty (not counting the base). The controversial design features hundreds of steps to reach the top.

In a gruesome incident which took place in August 2016, Caleb Schwab, son of Republican state representative Scott Schwab, suffered a “fatal neck injury” while riding Verruckt and died immediately.[2] His death shocked the community and ultimately resulted in the (still) planned demolition of the slide. The Associated Press suggests that Kansas “is known for its light regulation of amusement park rides.” Unfortunately, it appears the slide was too extreme and resulted in catastrophe.

Located at Action Park in Vernon, New Jersey, the world’s longest waterslide measures 602 meters (1,975 ft) long, which equates to over one-third of a mile! The unnamed waterslide is composed of 20 sections, each 30 meters (100 ft) long. The primary material of the slide is polyvinyl chloride, which is also used to make the bounce houses that children enjoy. You guessed it: That means that this slide is inflatable. It takes over two hours to fill with air, utilizes approximately 3,800 liters (1,000 gal) of water per hour, and offers rides that can last up to 90 seconds.[3]

The slide was certified by Guinness World Records in 2015 as the longest waterslide, but it was not open to the public. The ride hadn’t established a weight limit, so its potential for danger was relatively unknown. Another factor was the “lengthy process” of state certification. However, a select few employees were allowed to take their turn on the record-setting ride.

It’s not just a slide; it’s a water coaster! Mammoth, located at Holiday World & Splashin’ Safari in Santa Claus, Indiana, is constructed of a combination of slides as well as a conveyor belt, allowing riders to have a similar experience to a roller coaster, while being drenched in water. The ride, which opened May 2012, dethroned its record-holding predecessor, Wildebeest, which is located at the same water park. Mammoth’s unparalleled twists, turns, and rises total a length of 537 meters (1,763 ft.)[4]

The coaster is designed for rafts of up to six people, situated to face inward, ensuring that families can enjoy the record-setting fun together. These brave Mammoth riders will experience six drops along the coaster’s track. Spinning down the winding path, which overlooks the rest of the expansive Holiday World & Splashin’ Safari water park, may be the optimal ride for the ultimate thrill-seeker.

Schlitterbahn Galveston Island’s water coaster, MASSIV, lives up to its name. The depth-defying attraction, located in Galveston, Texas, is perched 24.9 meters (81.6 ft) in the sky and was created to mark the site’s tenth anniversary.[5] The water coaster consists of several uphill climbs and a compensating triple drop near the end. The ride has been certified by Guinness World Records as the tallest water coaster.

Although riders simply enjoy the waterslide for its thrill, there was no lack of exacting science that went into its creation. Schlitterbahn’s lead designer, Emily Colombo, remarked on how balancing “g-forces, ride dynamics, and velocities” was vital to yielding a successful ride. The coaster is sure to be enjoyed by all, due to its variation in speed and vigor. The park’s general manager commented that this versatility is “something we are always looking for in our attractions.” 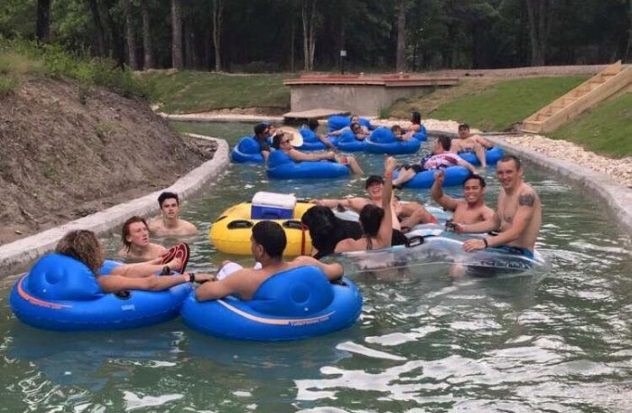 Providing some respite for thrill-seekers and Heaven for relaxers, the lazy river at BSR Cable Park in Waco, Texas, is just shy of 1.6 kilometers (1 mi) long.[6] This earns it the title of longest lazy river in the world. The lazy river offers parts drenched in sun and parts covered in shade, catering to all riders’ preferences.

While it doesn’t vary greatly from other lazy rivers, what it lacks in uniqueness, it makes up in sheer size. The river is adult- and kid-friendly and guaranteed to satisfy the need for summer refreshment, especially given the sizzling temperatures Texas can see during the season. 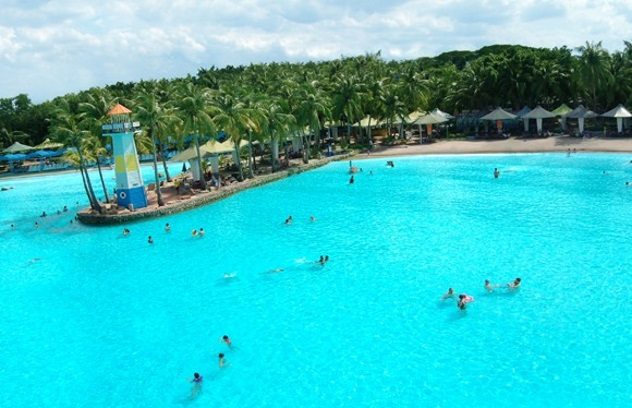 The first non-US destination on the list is Siam Park City (a water park, not a city) in the Khan Na Yao district of Bangkok, Thailand. Not only is it Asia’s largest water park, but it certifiably possesses the world’s largest wave pool, according to Guinness World Records. The wave pool is an astounding 13,600 square meters (146,400 ft2) and a destination for young children and adult thrill-seekers alike. The pool has the potential to generate waves up to 1.5 meters (5 ft) high but is controlled not to exceed 60 centimeters (24 in) to ensure the safety of all patrons.[7]

Despite the countermeasures in place, wave pools still pose a safety threat, especially to children. When children enter a wave pool to a depth above their height, the constant flow of water and uneven conditions make it the perfect storm for drowning. But for most, this wave pool can be a great compromise between the flowing waters of a lazy river and the rushing rapids of a water coaster. 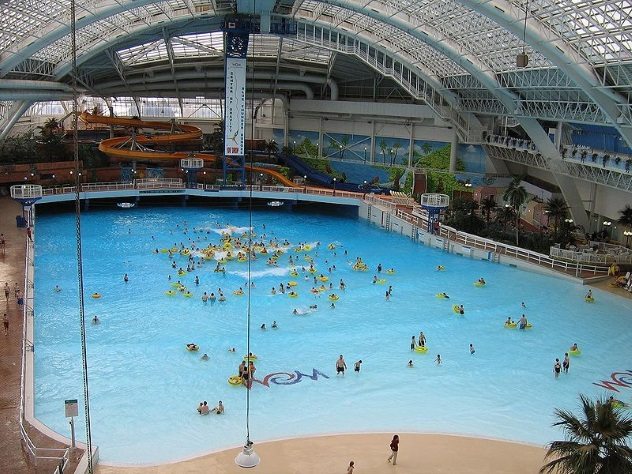 Shifting back across the globe to the West Edmonton Mall in Edmonton, Alberta, Canada, is the World Waterpark, which features the world’s largest indoor wave pool, called Blue Thunder. Blue Thunder possess four active wave bays, each containing two panels powered by a 1,500-horsepower hydraulic implement. There are two additional wave bays that have been deactivated, a consequence of overwhelming injury due to the excessive intensity of the waves! When all panels were enabled, the waves were too high and rough for even the most experienced swimmers.[8]

With the seemingly endless rush of water feet above a swimmer’s head, the outcome is never promising. Thus, Blue Thunder today generates waves of 1.5 to 1.8 meters (5–6 ft), utilizing only the inner wave bays. The pool can hold a whopping 12.3 million liters (3.2 million gal) of water. Blue Thunder is also frequently used after hours for private surfing, kayaking, paddleboarding, and other related endeavors. The waves are then adjusted accordingly to become more intense.

What is located in Erding, Germany, is 356.3 meters (1,169 ft) long, and ensures enjoyment along the way? The Magic-Eye at Galaxy Erding water park, of course. This ride is the longest inner tube waterslide in the entire world, as certified by Guinness World Records in November 2010.[9] No recent attempts have been able to surpass the legendary length of Magic-Eye. The waterslide opened May 2007 and was built by Klarer Freizeitanlagen AG, Switzerland, a world-renowned leader in waterslide construction.

Magic-Eye’s record-setting length is complemented by its 22-meter (72 ft) height. The tube slide features a distinct interior distinguished by continuous seemingly glowing lines that create an unmatched viewing experience while riding. The design can be overwhelming to some patrons due to its strobe-style effect, which could arguably be potentially fatal if someone with epilepsy were to ride the waterslide alone. 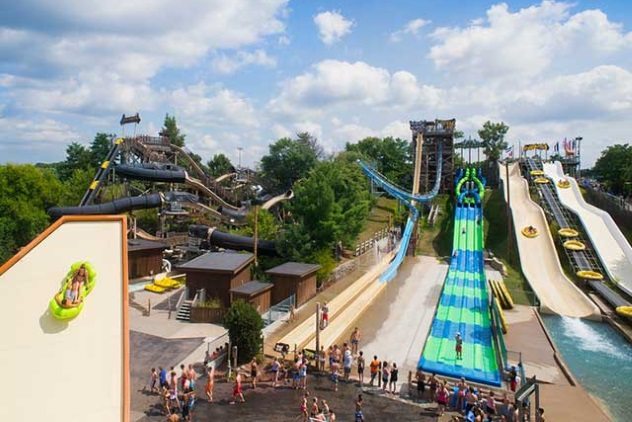 Noah’s Ark Water Park in Wisconsin Dells, Wisconsin, is the United States’ largest outdoor water park, totaling 70 acres.[10] Although the park doesn’t possess any record-setting attractions of their own accord, the 51 rides work together, marking Noah’s Ark as the crown jewel of Wisconsin Dells, dubbed the “water park capital of the world.” Despite the town’s small population, it contains 28 water parks, with Noah’s Ark undoubtedly the focal point.

Thrill-seekers can enjoy rides that, for example, offer a near-vertical drop in which the floor gives out beneath riders or a 400-meter-long (1,300 ft) water coaster that showcases unexpected turns and bumps. On the other end of the spectrum, those in search of a more relaxed day at Noah’s Ark Water Park can enjoy a ride on the lazy river or a dip in the wave pool, which alternates wave functionality on and off every ten minutes.

Some of the more extreme rides have been known to malfunction. For instance, it is not uncommon for riders to get stuck on the Scorpion, in which they actually do a loop (similar to a roller coaster). This goes to demonstrate the truly risky nature of water entertainment. Although the weather of Wisconsin fluctuates from sweltering in the summer to freezing in the winter, Wisconsin Dells also provides an abundance of indoor water parks that will fulfill aquatic adrenaline-chasers’ desires year-round. 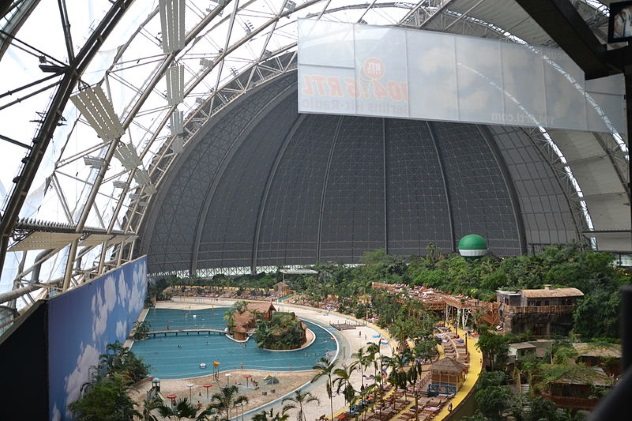 Rounding out the list, we’re headed back to Germany to the sprawling Tropical Islands Resort, located in Krausnick, a bit southeast from the capital, Berlin. This jaw-dropping indoor water park utilizes more than 16 acres of land and can accommodate up to 6,000 guests at any given time.[11]

The luxurious Tropical Islands Resort serves patrons of all ages, featuring paddling areas and proportionate waterslides for youth as well as bigger attractions and a Bali-inspired lagoon, perfect for adults seeking both adventure and relaxation. Tropical Islands Resort is climate-controlled and topped with a glass roof, allowing everyone to immerse themselves in the sunshine, regardless of the varying temperatures, all year long.

Read about more bizarre and even dangerous attractions on 10 Insane Rides From The World’s Most Dangerous Amusement Park and 10 Bizarre Theme Parks From Around the World.