When one is immersed in nature, absorbing sounds, smells, and the views, it brings us back to our primordial roots. It can be a place for healing and rejuvenation of the spirit, with psychological and physiological benefits. It’s no wonder that it connects us to our brief, impermanent being.

Humans are creators instinctively, so we want to contribute to the landscape and make our impression on the world. Sometimes, we create beautiful things, only to let them go. We enjoy the transience of art, like building sandcastles even though we know they will be washed to the sea or designing intricate mandalas that we will destroy upon completion with a blow of breath.

Some people, however, take this inclination a step further. This list is concerned with artists, shepherds, adventurers, as well as millionaires and rebels who have participated in this desire to create something incredible, only to hide it in the middle of the wilderness for someone else to find. 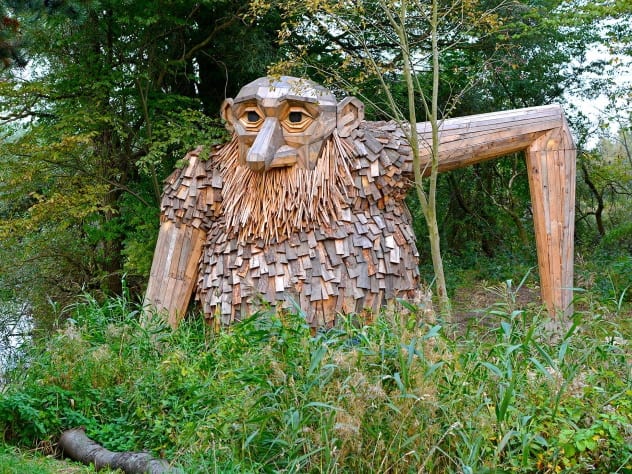 If you find yourself wandering off the beaten path in a forest in Copenhagen, Denmark, you may encounter giants. Six massive sculptures made from recycled wood were created by Danish artist Thomas Dambo, who hid them deep in the woods for hikers to come across. Some are camouflaged amid tall trees, while others lounge on hillsides. One is even lurking beneath a bridge like a troll.

Dambo says, “As humans, we often have a way of choosing the beaten path and the main roads.” In this creative endeavor, he wanted to challenge that mindset and encourage people to explore the hidden outskirts of their town. He calls the project an “open air sculpture treasure hunt.” For those with a taste for adventure, he posted a treasure map on his website with hints so that people can follow the bread crumbs. He also engraved poems on stones near the sculptures with clues to find the next one.[1] 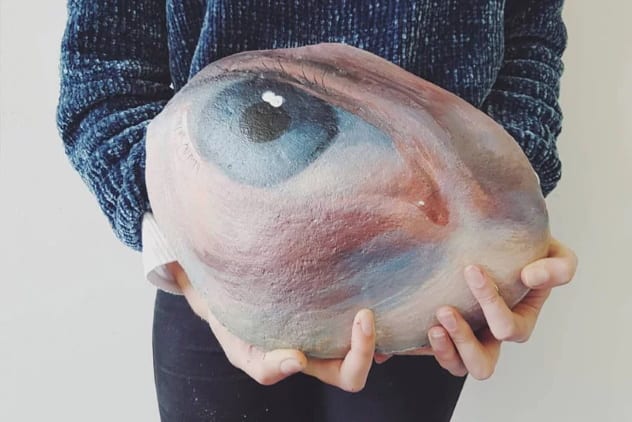 Nietzsche famously said, “ . . . if thou gaze long into an abyss, the abyss will also gaze into thee.” Australian artist Jennifer Allnutt took this statement quite literally. She paints stunningly hyperrealistic eyes, complete with lids, lashes, and the surrounding skin. She uses stones as her medium and then places those stones back into nature in the exact spot she first found them.[2]

Allnutt says, “I’m fascinated by those in-between, grey areas, intangibles and ambiguities and then fusing these into the physicality and language of paint.” She paints these ocular rocks to create a sense of wonder in the unsuspecting passerby, who may find that the abyss is gazing back after all. She also says that if the eyes don’t meet another’s gaze, that’s alright, too. They can simply be lost forever. 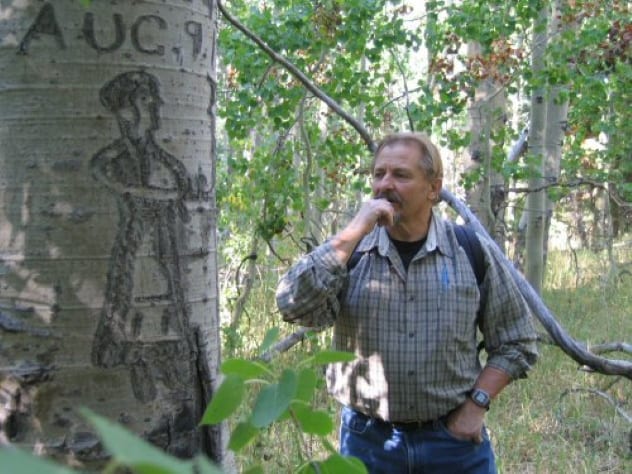 Who hasn’t carved their initials into a tree at some point? Trees have been a canvas for this activity since ancient times, and there’s a new field of archaeology that’s being created around this human tradition. The study of arborglyphs examines the world’s oldest tree carvings, some of which are a few hundred years old. Since the carvings were etched onto a living host, the artifacts can only exist as long as the tree does.

The most famous arborglyphs were created by Basque shepherds from the mid-1800s in the western parts of the United States on the smooth, white canvas of aspen trees. Being isolated for long lengths of time in remote forests with no one to talk to but the sheep led to the creation of elaborate tree carvings.

In the mountains of California, Oregon, and Nevada, 20,000 of these living artifacts have been recorded for study, from drawings to poetry. Without them, nobody would ever know that these shepherds existed. There’s nothing written about them in history. They were only able to communicate through time by leaving these hidden messages behind. One carving simply says, “Es trieste a vivir solo,” which translates to, “It is sad to live alone.”[3] 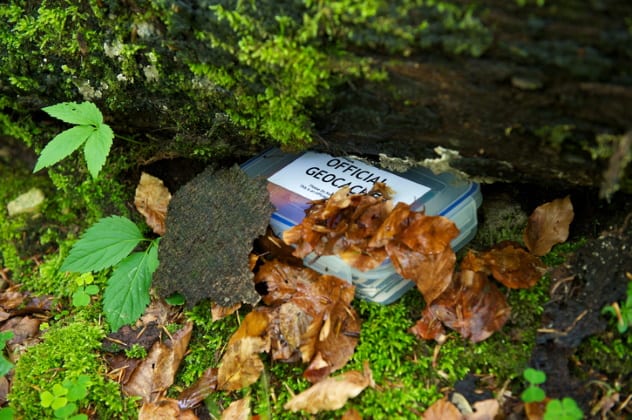 Geocaching usually involves a group of people who are hunting for a cache that has been left behind by someone else. They use GPS coordinates to determine its whereabouts. This recreational activity was made popular in recent years by the relative ease of finding specific points in nature by simply using a smartphone. It’s a treasure hunt that’s not only meant for children but also adults, who hunt for geocaches all over the world.

A cache is a small, waterproof container that has at least a pen and a notebook for hunters to exchange musings of their journey and sign their code name into the log as proof that they found it. Then, they re-hide it for the next person. Some of these caches have toys, gems, trinkets, or other small objects to exchange. It’s the usual “take one, leave one” scenario.[4]

Some of the caches can be extremely challenging to find. There’s an underwater cache that’s only accessible by scuba diving to the site, for example. Another cache is a fake bird’s nest, complete with eggs and even a phony bird guarding over them. 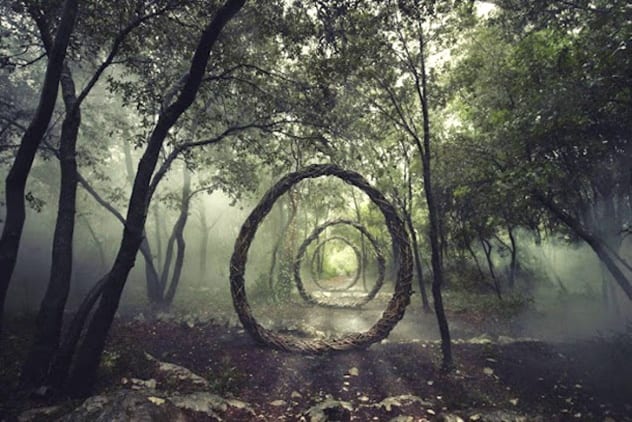 Spencer Byles is an artist who sculpts branches and twigs to create a mystical experience of twisting, curving limbs that appear to be the result of magic. In the south of France, Byles sculpted the woods surrounding the Loup River. After a year of living in the remote wilderness, he left behind these strange, temporary structures from the natural materials he came across.[5]

Byles says, “The force of life and growth and the slow disintegration of all living things has always fascinated me.” These fairy-tale creations are woven into the natural fabric of the landscape and are almost impossible to find, but Byles doesn’t do it to attract attention. He doesn’t share the location of the ephemeral sculptures because he prefers that people stumble upon them by chance. 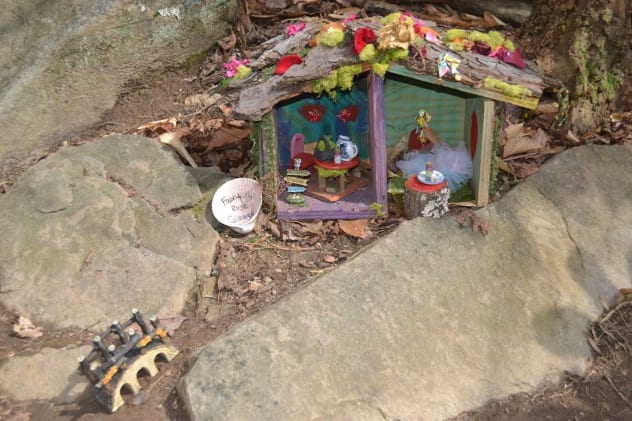 The lore of fairies, enchanting thumb-sized creatures with wings that live deep in the woods, continues to allure children and the young at heart. Some communities keep the flame of imagination lit by creating fairy houses for people to find on their nature hikes. In Roswell, Georgia, for example, they exist along a public nature trail to the delighted squeals of children visiting the Chattahoochee Nature Center. They can be hidden in stumps or bushes. Fifteen of these whimsical fairy houses are carefully camouflaged into the natural surroundings, as they are made of twigs, pine cones, moss, rocks, and feathers, so it takes a keen eye to discover them.[6]

In upstate New York, 20 fairy houses have mysteriously appeared on a rarely used nature trail. These charming cottages are ornate, with painted doors that opened up to reveal tiny steps and ladders inside. Now, they attract visitors who want to connect to their inner child. Fairy homes are also popping up on the islands of Maine and across the nation in San Francisco Bay. 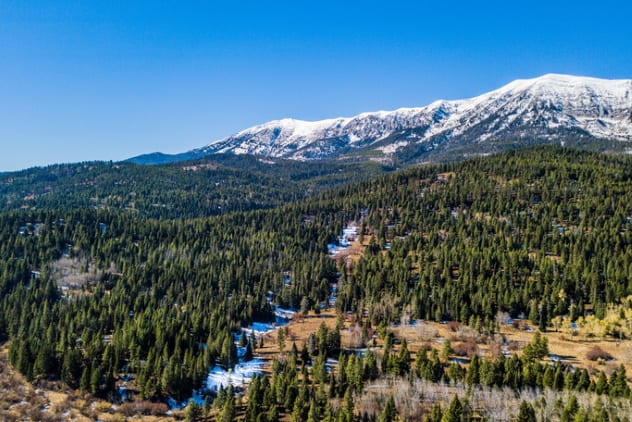 A sheriff in Montana had to issue an official warning that the hunt for the infamous, secret treasure chest could be deadly. In 2010, an eccentric millionaire named Forrest Fenn said that he’d hidden a chest filled to the brim with gold and jewels somewhere in the Rocky Mountains. The 19-kilogram (42 lb) chest holds antique coins, relics like an ancient Chinese jade carving, and a jar of Alaskan gold dust. Fenn left clues in the form of poetry and has dropped other hints throughout the years.

Ever since, treasure hunters have been scouring the hills in search of it, and two have died in the pursuit. Others have come close to death and wound up seriously injured. The problem is that treasure hunters don’t want to reveal their location to anyone at the risk of someone finding the chest before them, so nobody knows where they are when something goes wrong. This was not Fenn’s intention when he set the treasure hunt into motion. He had been diagnosed with cancer, and he wanted to leave behind a legacy that inspired people to explore the outdoors and pursue the thrill of the treasure hunt.[7] 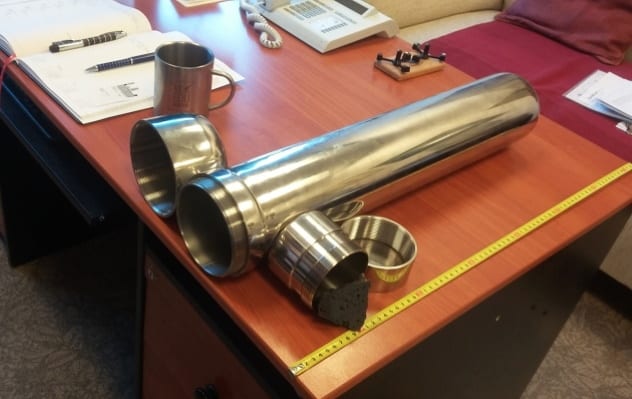 On Spitsbergen, an island in the Svalbard archipelago, researchers created a time capsule that contains the history of civilization and preserves the science and technology of modern humans in 2017. They buried the 60-centimeter (24 in) stainless steel tube 5 meters (16 ft) deep in a fjord, where it won’t resurface for at least 500,000 years.

Within the tube, scientists have included DNA samples from humans, rats, salmon, and even potatoes to explain the biology of our time. There’s a bee frozen in resin and about 300 tardigrades, which are the microscopic “water bears” that can survive exposure to radiation and other extreme conditions. To inform the future discoverers of Earth’s geology, they included a chunk of a meteorite that’s 4.5 billion years old, sand from Namibia that has diamond particles, and lava from a volcanic eruption in Iceland. The technology they placed in the capsule includes electronic devices like a basic mobile phone but also more complex machinery like a radiation detector. They also threw in a photograph (etched into porcelain to extend its existence) of Earth taken from space.

The permafrost specialist who created this time capsule is Marek Lewandowski. He says, “I wanted to create a memorial for the ages.”[8] So, he filled the container with objects for a distant, unimaginably different civilization to hopefully find and decode many years from now. 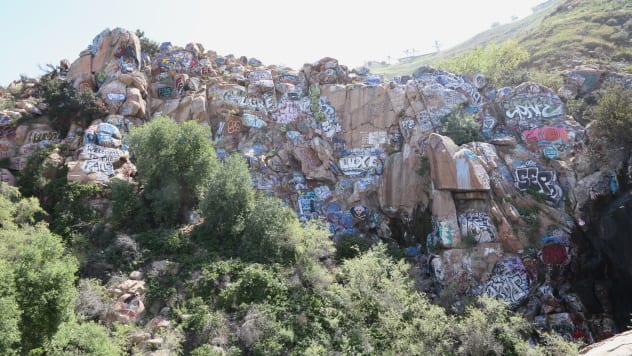 Graffiti can be found in the most unlikely of places. Not only are spray cans light and easy to carry, but humans have an insatiable propensity for leaving their mark. In Riverside, California, for example, there’s a local secret spot where people go to do just that.

It’s called Graffiti Waterfall, although it’s not a waterfall at all. It’s a giant mound of rocks tucked between hillsides, where just about every crevice is painted in bright, swirling colors. This mural has been touched by many people who dare to climb the steep and treacherous rock pile for the sake of creating something that simply says, “I was here.”[9]

Andy Goldsworthy is the master when it comes to nature art, which entails working with natural materials that disappear over time by either ice melting, wind blowing, or rainfall. Whether it’s stacking ice between two tree trunks or laying down the petals of poppies in a bright red line down an ancient staircase in Spain, Goldsworthy surprises people by challenging their perception and creating an uncanny reality that makes you look twice. He’ll set down golden autumn leaves around the base of an old sycamore tree to make it appear as if the tree is glowing. He’ll use mud as his paint or ice as his clay. It doesn’t matter, as long as the materials are natural and overtaken by nature’s course eventually.[10]

He never creates anything permanent, but he does photograph his work upon completion. Goldsworthy says, “It’s not about art, it’s just about life and the need to understand that a lot of things in life do not last.” His work is too bizarre and diverse to capture in words, so he’s made documentaries to capture his art and the process it takes to make it. If interested, check out the trailer above for Leaning Into the Wind to get an idea of what nature art is and the nerve it takes to create it. At times, he can put his life in danger for the pursuit of his creations, like balancing on icy rocks at night or walking through a mangrove swamp in Africa. He’ll be cut and bloodied by brambles and still go on making art that may only last for seconds and be seen by no one except him.

Read about more bizarre artistic creations on 10 Artists With Insanely Unique Art Forms and Top 10 Artworks Made Of Humans.