A wall, fossilized mud, a piece of pottery—they all have the potential to be pages in history. Some were colored and carved on purpose. Others were marked by accident but revealed dramatic information to archaeologists no less.

The most valuable are the rare, even unique, glimpses back in time. From natural disasters to prehistoric hunts, secret messages, and one strange-looking Jesus, ancient surfaces are the books to read. 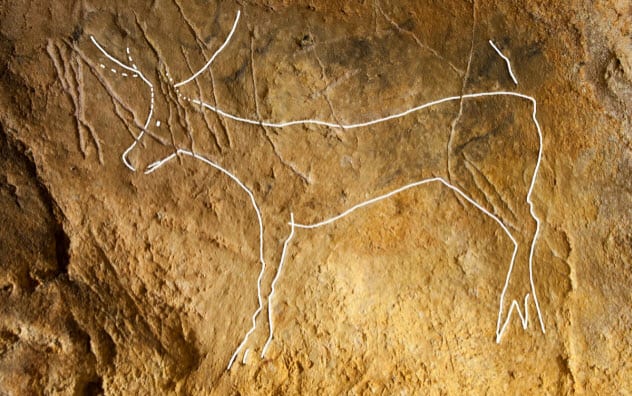 The Paleolithic marked mankind’s earliest cultural development. In France, such communities dwelt in the Burgundy region where they possibly even mingled with Neanderthals.

The last 150 years turned up plenty of evidence that Paleolithic humans lived in the Saone-et-Loire district, but there was a glaring lack of painted caves. This was odd. Across Europe, concentrated Paleolithic sites always came with rock art.

In 2018, archaeologists took equipment to scan two caves suspected of harboring hidden decorations. Called Grottes d’Agneux, they certainly did not lack foot traffic. Throughout the 16th to 19th centuries, visitors appreciated the wonderful nature views offered by the caves. However, these people also left so much graffiti behind that the original cave walls were obscured.

Incredibly, the scans found something underneath the centuries-old names, dates, and pictures. The first Paleolithic paintings of the region depicted a deer and a horse. Analysis determined that the images were around 12,000 years old.[1] 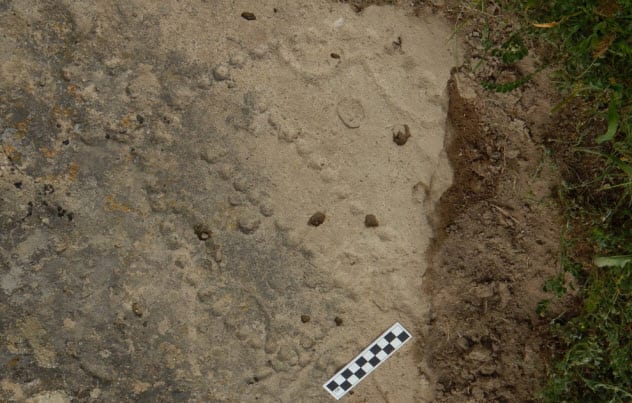 The ancient Middle East played a mysterious game. The original name and rules were lost, but the board game is now referred to as “58 Holes,” or when the Egyptians took it up, “Hounds and Jackals.”

Most recently, archaeologists found a game set in a cave in Azerbaijan. The cave floor was pockmarked with holes where nomadic herders would have played the game. Incredibly, the stony playing field was around 4,000 years old. This made it about as old as a set found in a pharaoh’s tomb from the 18th century BC. (The latter came with the trademark canine playing pieces of the Egyptians.)

The Azerbaijan game was a classic version of its kind. Archaeologists recognized the distinctive pattern of the round holes, their different sizes and markings, and even the lack of dice.[2]

No set ever came with a device that called a player’s next move. Some believe that “58 Holes” is the ancestor of backgammon, but this is a myth. Backgammon developed from a much younger game, Tabula, which was invented by the Romans. 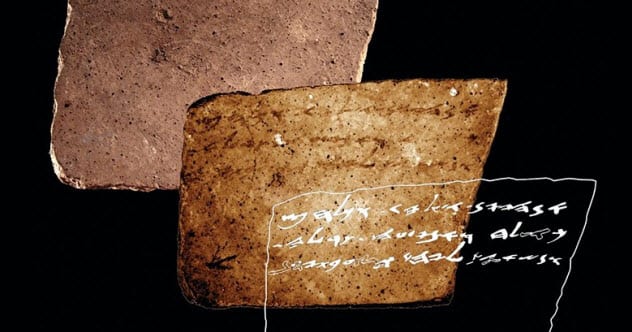 Around 50 years ago, a piece of pottery was found at Tel Arad. This site used to be an ancient fortress near the modern-day Israeli city of Arad. The front of the 3,000-year-old artifact contained writing about military finances. The rest of the shard was blank.

In 2017, archaeologists noticed marks on the back. By then, the technology had arrived to detect things invisible to the human eye. During renewed testing, researchers used multispectral imaging to see if the marks meant something.

As it turned out, they were more than just accidental etchings. The scans revealed 17 hidden words. Humorously, the secret message was far removed from the professional financial tone of the shard’s front. The writer, most likely a soldier stationed at the fort, asked for wine and, in turn, promised to help the recipients with any demands of their own.[3]

A more cryptic request followed, requesting “a certain unnamed commodity to a certain unnamed person.” It finished by mentioning someone named Ge’alyahu who carried a specific amount of wine. 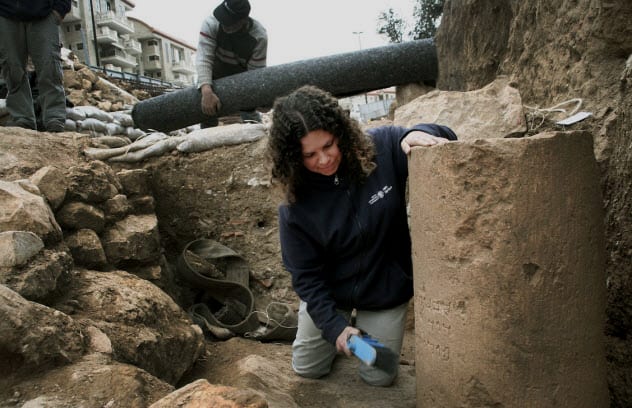 In 2018, archaeologists were called to clear an area. The location was earmarked for a new road, and builders needed to make sure that nothing historical would get destroyed. Amazingly, the team found an ancient ceramic workshop.

But that was not the exciting part. The Roman building had been raised in part with building material salvaged from other structures. One of the poached pieces was a column. Analysis placed it somewhere in the reign of Herod the Great (37–4 BC), but it also carried an inscription that was a little younger.

Carved around the first century AD, the inscription read in Aramaic, “Hananiah son of Dodalos from Jerusalem.” It remains anyone’s guess who these two people were. The third name, that of the ancient city, was an exceptional find.[4]

Usually, ancient writings and artifacts use the shorthand version or spell it “Yerushalem” or “Shalem.” The column name was written exactly as one would find in Hebrew today, “Yerushalayim,” making it the oldest ever found. There is only one other example from the first century. The name was stamped on a coin dated to AD 66–70. 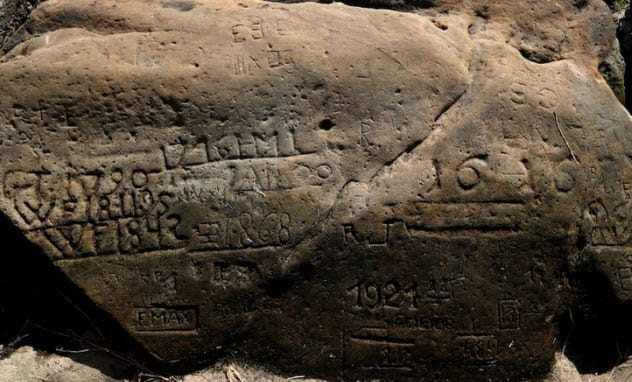 In recent years, drought lowered a river in the Czech Republic. Located near the village of Decin, the dropping water levels revealed large stones with inscriptions. Some hailed from the 1600s, and none of the rocks bore happy tidings.

Numbering over 12, the artifacts recorded the Elbe River’s dropping water levels and lamented the hardships that the drought would bring. They were soon given the apt name of “hunger stones.”

One person wrote about a failed harvest, high prices, little food, and the fact that the poor were abandoned to hunger. The same stone carried a sentence in German: “When you see me, weep.”[5]

The oldest boulder was dated 1616, making it one of the most ancient water-related landmarks in Central Europe. Together with the others, the rocky record showed the continent’s long history with droughts.

Though modern droughts are among the most extreme, they are still outclassed by those that ravaged Europe during the last few centuries. When the water levels dropped in the Elbe River, the villagers knew from past experience that life was about to turn harsh.

5 Life Of A Priest 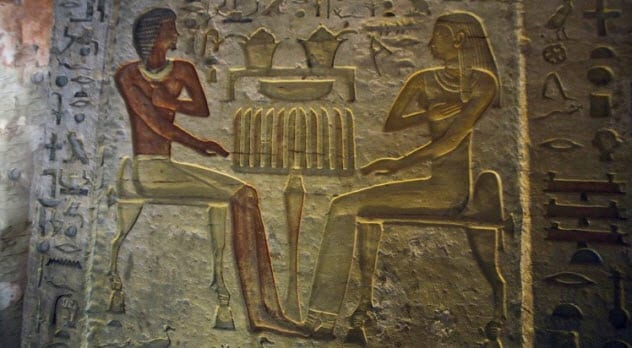 Among the best Egyptian treasures to rise in 2018 was the tomb of a royal priest. What made the site so spectacular was that the two-level wonder had not been looted and was filled with statues and colorful images.

The surfaces of the walls and artifacts told the story of Wahtye, the priest, and showed his family and the world in which he lived. For one, he adored his mother. Her name was found almost everywhere the archaeologists looked. He served King Neferirkare during the Fifth Dynasty, which lasted from 2500 BC to 2350 BC.

The tomb, located south of Cairo, still needs to be fully explored. As it was not looted, it might yield more great finds, including the body of Wahtye himself.[6] 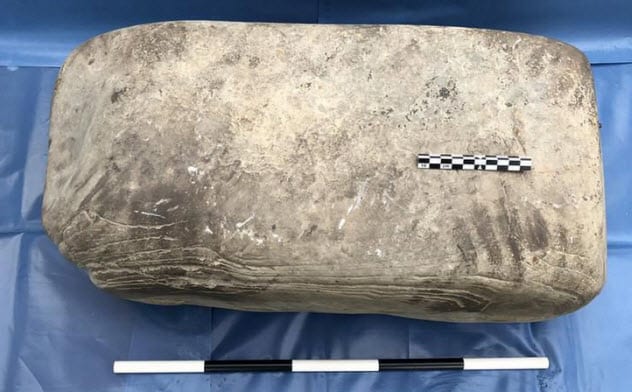 In Scotland, archaeologists face a serious challenge. Pictish sites are valuable because almost nothing is known about the culture (300 BC–AD 900). One site with a history of producing artifacts and ruins is slowly being claimed by the sea.

During recent rescue excavations at Swandro, the team focused on a smithy. The building had once been underground and had a swinging stone door, circular room with a hearth, and two large anvils. The latter were big beach stones.

During the cleaning process, one anvil showed a dark handlike print. Initially, researchers thought the excavators left the smudgy image. However, it soon became clear that the marks were ancient. Also, they were indeed somebody’s digits. Around 1,500 years ago, the person came into contact with black carbon and performed a move that left behind marks from his hand and knee.

Thus far, the shadowy remnants of the coppersmith have no equal in the archaeological record. Apart from being unique, they also provide a personal connection to a civilization so ghostly that Picts are often referred to as “Europe’s lost people.”[7] 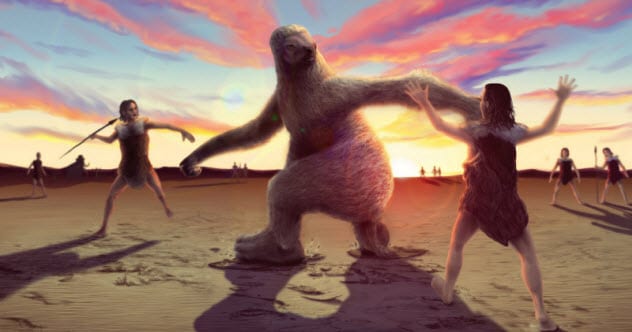 In 2017, fossilized human footprints turned up in the White Sands National Monument park in New Mexico. A 2018 study examined the steps and found what appeared to be a hunt in progress. This conclusion was drawn from the surprising discovery of human footprints inside the larger, kidney-shaped sloth tracks.

The footprints were around 11,000 years old. Their age and lack of other evidence made the full event hard to piece together. However, there were clues. Finding human prints inside the animal’s meant that the humans had followed a fresh trail and they did so with dogged persistence.[8]

At one point, the sloth’s footprints showed that the animal had reared up and flailed. This suggested that it made a stand and took swipes at the hunters. Modern tree sloths are vulnerable creatures that cannot fight. The giant ground sloth was deadly. Upright, it stood 213 centimeters (7’0″) tall.

This one used its muscular body to swing long limbs armed with sickle-shaped nails. It is doubtful that stone weapons could have killed the beast, but the find proved that humans interacted with ground sloths, a species that went extinct during this time. 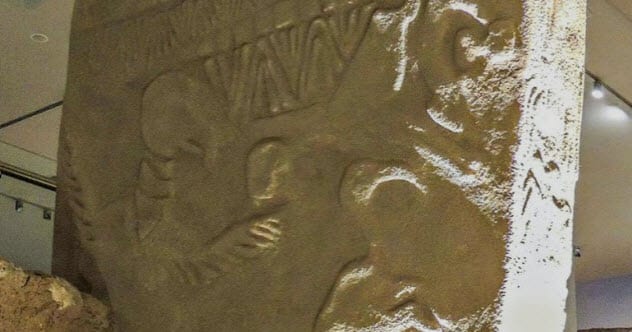 Millennia ago, humanity suffered a mini ice age. Called the Younger Dryas, it lasted about 1,000 years. Researchers long suspected that a comet caused the disaster, but no evidence supported this theory.

In 2017, archaeologists studied symbols at Gobekli Tepe in Turkey. Considered the world’s oldest temple (9000 BC), one of its pillars appeared to commemorate the terrible event. This column, known as the Vulture Stone, bore carvings of animals and showed Earth being slammed by a shower of comets. The meaning of the panel remained elusive—until the recent study.

Remarkably, the animals’ positions matched constellations in the sky. This allowed scientists to pinpoint the date with a margin of error of around 250 years. The comet theory strengthened considerably when the date matched the time that the Younger Dryas began.[9]

An ice core from Greenland suggested that the frosty millennium began around 10,890 BC, and the Vulture symbols depicted the sky around 10,950 BC. This also changes the long-standing belief that Gobekli Tepe was just a temple. It was likely also an observatory. 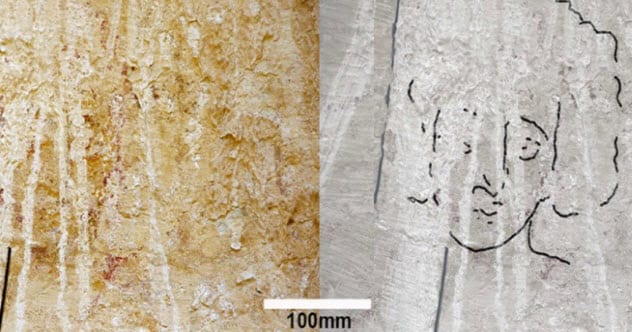 In the 1920s, archaeologists excavated an ancient church in Israel. Near the ceiling in the baptismal area, they found a faint painting. Its near-invisibility prevented deeper interest.

In 2018, an archaeologist happened to be standing near the image when the light hit it in just the right manner to reveal a pair of eyes. With effort, the faded lines were examined to reveal the rest of the face. Unexpectedly, it was a beardless Jesus.

Unlike the bearded, long-haired icon most people are familiar with, the clean-shaven man also came with a long nose and a head full of curls. The figure’s unusual looks were not the main reason that archaeologists became excited. The Holy Land has few old paintings of the baptism of Jesus. There are none showing baptismal scenes that are pre-iconoclastic.

The painting’s earliest age is around 200 years after the crucifixion. This makes it old enough to be the first. Its location in the church and the presence of a larger figure suggested that this was a baptismal scene. Later baptismal scenes show John the Baptist with Christ, but John is nearly always the bigger of the two.[10]