Sometimes, a weapons designer gets tired of making regular, boring guns and bombs and decides to make something . . . special. The results are often as awe-inspiring as they are utterly wacky.

The following 10 examples are the kinds of weapons produced by the fevered minds of engineers when they stop caring about things like subtlety and practicality. 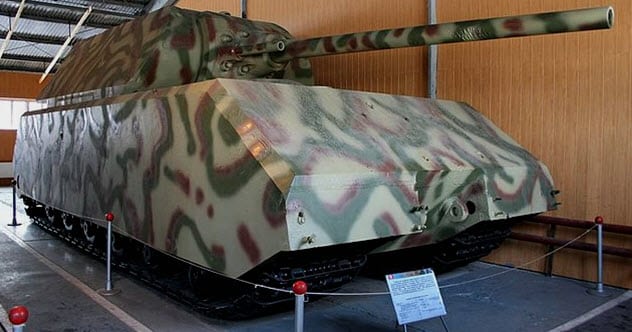 Irony surely played a part in the naming of the Panzerkampfwagen VIII Maus (“Mouse”) as it bears no resemblance to its namesake. Weighing in at a whopping 188 metric tons, it still holds the title of largest armored fighting vehicle.

Its top speed was only 22 kilometers per hour (14 mph). But with armor up to 220 millimeters (8.7 in) thick, it could afford to be slow. Whenever the lumbering behemoth eventually reached its target, the combination of its sheer weight and 128-millimeter (5 in) main gun would surely be enough to smash through any obstacle in its way. With a weapon like this, the Nazis would surely be invincible, right?

Well, Hitler seemed to think so as he was arguably the tank’s biggest proponent. Truthfully, though, Maus had numerous flaws that held it back. For one thing, a powerful engine was needed to propel the beast, which was a terrible gas guzzler. Its sheer weight meant that it couldn’t even cross bridges. Its gigantic size would have also made it an easy target for Allied bombers.[1]

Out of an initial order of 150, only two were produced before Hitler canceled the project. 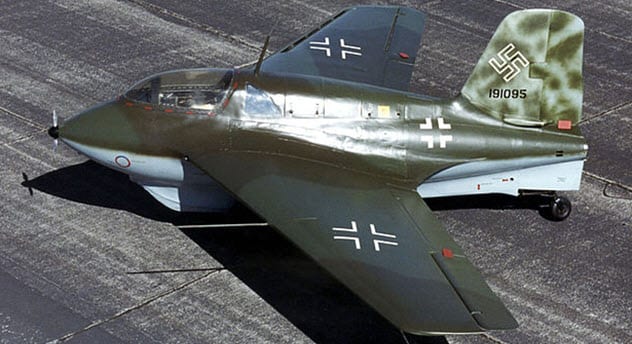 You can say this for the Nazis: They did not lack for audacity. They were willing to try just about any insane idea if they thought it would help them win the war.

Unfortunately for them, the Komet only came into service in the final year of the war—much too late to turn the tide in their favor. Then again, given how insane this thing was, it’s entirely likely that it wouldn’t have mattered anyway.

To get the positives out of the way, the 163 was a rocket-powered aircraft in a time when most planes were still prop-driven. So it did at least have that going for it. But that’s about it.

For one thing, the craft was dangerous just to start as vacuums would occasionally form in the fuel liquid, causing it to explode when turned on. This fuel was also a mixture of two highly corrosive materials that would spontaneously combust upon mixing whether or not one wanted it to.[2]

Once in the air, the 163 only had enough fuel for eight minutes of powered flight, which drastically limited how long it could operate. It also flew too fast for its main guns to be very accurate. Landing was a dicey proposition as troublesome landing gear made the Me 163 prone to overturning, at which point it would often explode. 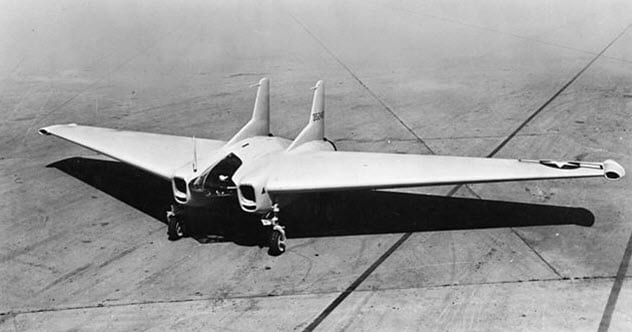 Let’s turn away from the Third Reich for a moment as they were not the only military to dabble in weaponized insanity. Enter the Northrop XP-79, a so-called “bomber-rammer” that was intended to do exactly what its name implies. The XP-79 was designed to ram enemy bombers out of the sky using the reinforced leading edges of its wings. The cockpit was made with armored glass that would protect the pilot from the impact.

The XP-79 never got out of the testing stage, though not for the reason you probably think. During its first and only flight, the pilot lost control of the craft, entered an irrecoverable spin, and crashed. Harry Crosby, the test pilot, was killed when he was hit by the plane upon attempting an emergency exit. The program was subsequently abandoned.[3] 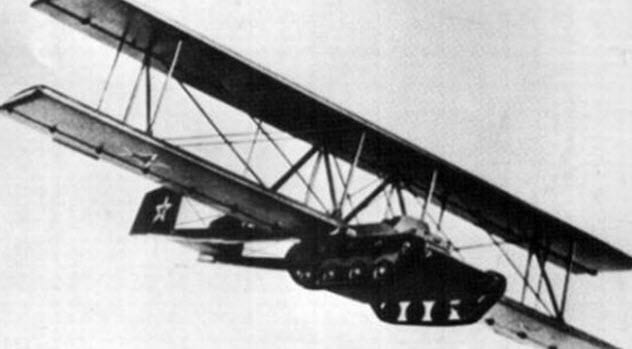 A flying tank sounds like the kind of thing a nine-year-old or perhaps Hideo Kojima might come up with, but that didn’t stop Oleg Antonov. Oleg wanted to devise a way to get a battle-ready tank onto the battlefield without risking a plane being downed by enemy fire.

When simply dropping tanks out of planes and having their crews parachute down to them proved to be an unfeasible solution to this problem, he had a simple solution. Slap some glider wings on that bad boy, and let it glide to the ground.

But as you might expect when trying to make a tank fly, weight proved to be a problem. Just to get the vehicle airborne required the removal of its weapons, fuel, and armor. To its credit, the test pilot described the landing as “smooth” and was even able to drive it back to headquarters. Sadly, this was not enough and the program was eventually scrapped.[4] 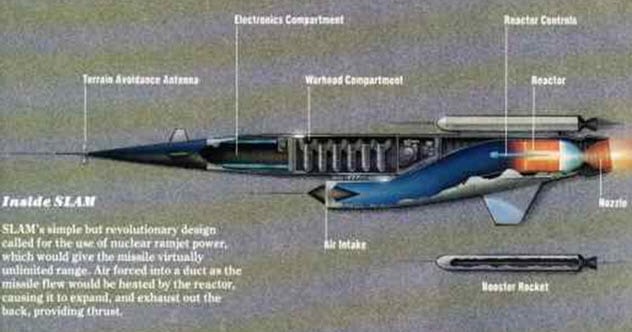 The Supersonic Low Altitude Missile (SLAM) was a weapon that is insane even by the standards of an article about crazy weapons. Envisioned as a third method of retaliation against the Soviets in the event of a nuclear war, the SLAM was a nuclear weapon delivered with nuclear power.

A nuclear-powered ramjet would heat air rammed into the missile as it flew, which would theoretically give it unlimited range. While the missile itself would carry a single nuclear warhead, it was also designed to carry multiple smaller nuclear bombs. Once on final approach to its target, it would rain down its nuclear payload before the missile itself detonated at its final destination.

There were many reasons why the project was canceled. One of the biggest was that just testing the thing would prove unfeasible. The unshielded nuclear reactor that powered it would render any land it flew over lethally radioactive.

If the radiation didn’t do the job, the shock wave might have as it was speculated that the shock wave might kill anyone underneath it. Finally, wherever the thing landed would become a nuclear disaster area. The government eventually decided that ICBMs could do the same job far more efficiently, and the project was scrapped.[5] 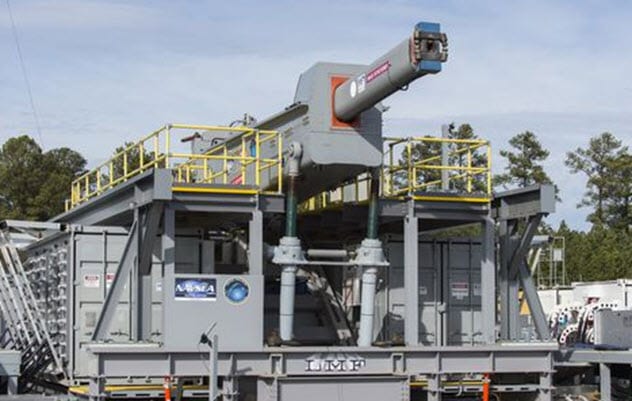 If you don’t respect the power of magnetic energy already, you probably will after seeing a demonstration of a railgun firing. Using the power of electromagnetism, these weapons can accelerate a projectile to speeds in excess of Mach 7.

The projectiles hit with even greater destructive power than a 12.7-centimeter (5 in) naval gun and with even longer range. As its ammunition is smaller in size than that of a traditional shell, more rounds can be stored and carry no risk of exploding if hit by enemy fire. Sounds like a perfect weapon, right?

Well, not quite. The intense heat generated by firing quickly warps the rails of the gun, greatly limiting how many full-powered shots it can discharge. It also requires a massive amount of energy to fire. Currently, only two ships in the navy can generate enough to fire it. Finally, the actual shots are hard to aim, meaning that a guidance system will be needed to make it accurate.[6]

However, unlike the other entries on this list, the railgun is still being developed by militaries all over the world. So there’s a good chance this one might actually see the light of day. 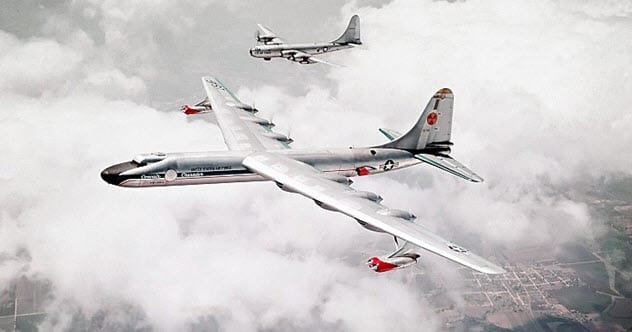 Nuclear-powered vehicles are an attractive proposition for any military because it would allow them to operate for extremely long periods of time. Unfortunately, radiation is a fickle mistress and one must be aware of its propensity to harm as much as it helps.

Just ask the fine folks who designed the Convair X-6. It was envisioned as a nuclear-powered strategic bomber that could stay aloft for weeks at a time.[7]

To protect the crew, 12 tons of rubber and lead would have been needed to shield the reactor. While a few test flights were conducted, the program was eventually scrapped. (The Convair NB-36H, pictured above, was the only US aircraft that carried a nuclear reactor.) 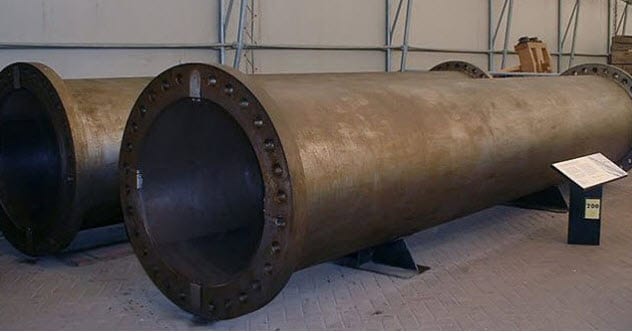 Third World dictatorships are like the annoying younger brothers of their more advanced cousins. Whatever big brother has, they want one, too. Naturally, this applies to weapons of mass destruction (WMD). Saddam Hussein, in particular, had a serious case of WMD lust and tried at various points to acquire nuclear and chemical weapons. But Project Babylon would have taken things to the next level.

Creator and project leader Gerald Bull envisioned a “supergun” capable of launching satellites into orbit, but Saddam had other plans. The dictator would have used the 156-meter (512 ft) barrel to launch projectiles farther than the Scud missiles he already possessed.

However, the gun was so big and heavy that it would have had to be mounted into the side of a hill, making it impossible to aim. Its huge size would have also made it an easy target.

The project was eventually canceled when Bull was murdered, possibly by Mossad agents.[8] 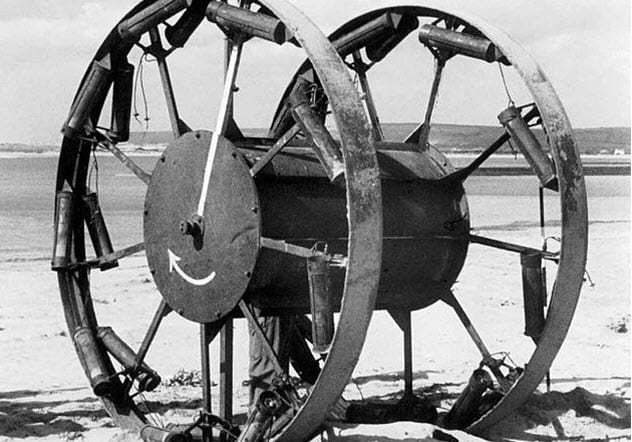 Turning back to World War II on the Allied side, the Panjandrum was a device consisting of two rocket-powered wheels propelling a cart full of explosives. It was intended to be used on beach fortifications.

The only problem: Once you pointed it at a target and lit the fuse, it was up to the capricious whims of fate as to where the thing actually went. Also, the rockets that propelled it would sometimes come loose and fly off in random directions.[9]

After a disastrous launch that almost resulted in the weapon killing a crowd of VIP spectators, the project was abandoned. 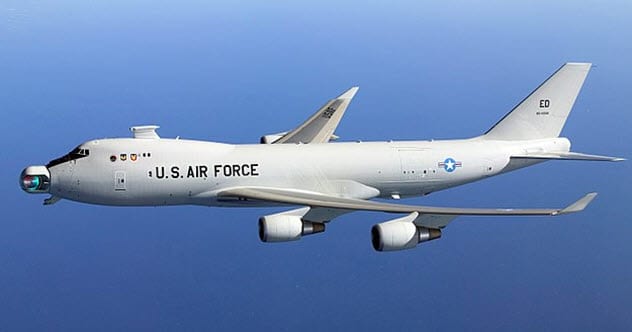 Since the rise of the ballistic missile, countries have scrambled to come up with a way to protect themselves from these weapons. The YAL-1 was Boeing’s answer to this problem. It was a plane equipped with a chemical laser to shoot down missiles. During testing, it actually shot down two test missiles.

But the laser was expensive and required a huge amount of electricity to operate. The plane that carried it was also large and unwieldy, an easy target for enemy interceptors. The project was canceled, and the plane was scrapped for parts.[10]

Dan Cayce is a writer who does writer things.