It is all too easy to stare into the empty depths of the eye sockets of a skull and forget that what you are looking at was once a human being with as rich an inner life as yours. These days, however, in museums, churches, and bizarrely unexpected places, many skulls are being found and transformed by researchers.

By reconstructing the faces of people from the past, we can bring them back to life, at least in terms of how we perceive them. Here are ten of the most breathtaking facial reconstructions, each of them providing a fascinating glimpse into history. 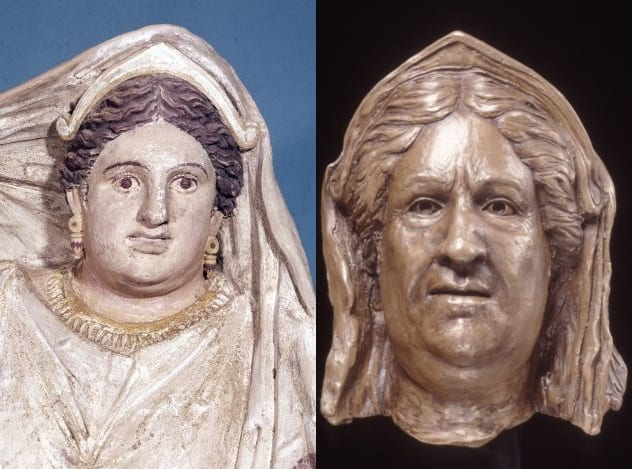 The Etruscans were the masters of Italy for centuries before the Romans conquered them. Today, little remains of their world, as the Romans were so thorough in absorbing them. Some of the most startling discoveries archaeologists have made are in the tombs the Etruscans left behind. Sarcophagi of the Etruscans show the dead as they looked in life. The dead person is depicted reclining on a bed, often with a pillow under one arm for comfort.

In the British Museum, the sarcophagus of Seianti Hanunia Tlesnasa can be found. Her image shows a plump but fresh-faced lady in the peak of health. Examining the less lively remains inside the coffin gave experts the chance to compare the image with the reality. They found Seianti Hanunia Tlesnasa to be a woman of around 50 when she died.[1] By modeling how her flesh would have been attached to her skull, they found that the model on top of the sarcophagus was clearly a portrait of the dead woman—even if a somewhat flattering one. 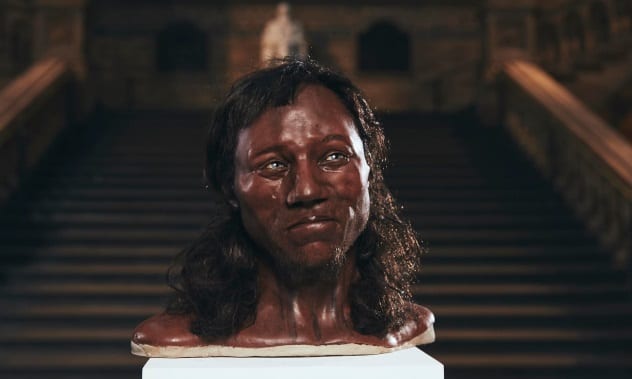 Cheddar Man is the oldest near-complete Homo sapiens skeleton found in Britain.[2] Dating to around 10,000 years ago, he has long been a figure of interest for historians. Where had he come from, and what was his life like? It was determined that he suffered from a bone infection and probably died a violent death, but not all that much was known about him.

In 2018, DNA studies on the remains allowed for an accurate reconstruction of Cheddar Man for the first time. It was discovered that Cheddar Man had blue eyes, dark, curly hair, and dark skin. It appears that the pale skin that can often be used to identify British people in the summer was a much more recent development than originally thought. Studies suggest that Cheddar Man was part of the population known as Western European Hunter-Gatherers, who formed around ten percent of the ancestry of modern Britons. 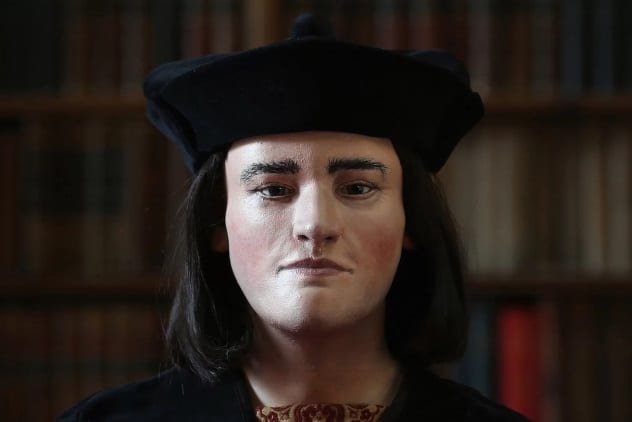 Kings do not usually have to wait for a parking space. Richard III of England spent centuries under a parking lot, however. In 2012, more than 500 years after his death in battle, the king’s remains were dug up. Archaeologists had good reason to suspect he was buried there, as it was known to be the site of the church where he was thought to have been laid to rest. They immediately suspected they had found their monarch by examining the bones and noting the wounds which caused his death and the scoliosis which twisted his spine. Confirmation came through DNA comparisons with surviving relatives.

Using the rediscovered skull, they were able to give us the first accurate portrait of the maligned Richard.[3] Paintings done during his reign were later altered, and those done afterward showed the king as a wicked and deformed character. We now know that Richard simply had a somewhat prominent nose and chin. 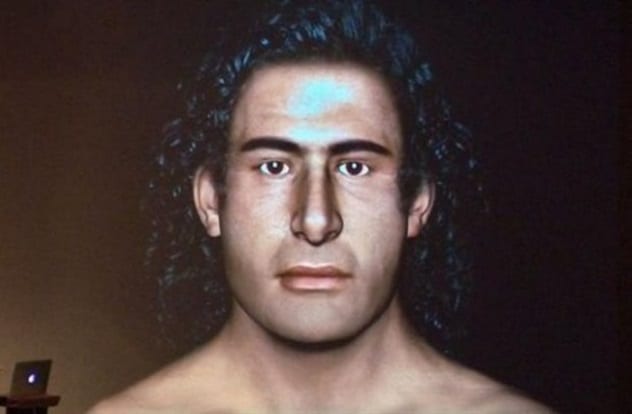 The Griffin Warrior Tomb is the name given to an archaeological site at Pylos in Greece. Discovered in 2015, it dates from around 1450 BC and contained rich offerings, as well as a skeleton. One of the finds, a tiny engraved gem showing two men in combat, is considered one of the masterpieces of ancient Greek art. The Griffin Warrior of the tomb got his name from an ivory plaque showing a griffin.

The excavation showed that the dead person was a man in his thirties and likely to have been both rich and important. The quality of the goods alone testified to his wealth, but his height and strength suggested he had enjoyed a good diet in life. Combs found in the grave suggest he wore his hair long. By examining the skull and the engraved stone, a facial reconstruction was made that captured both the warrior’s facial structure and how he wore his hair and shaved.[4] 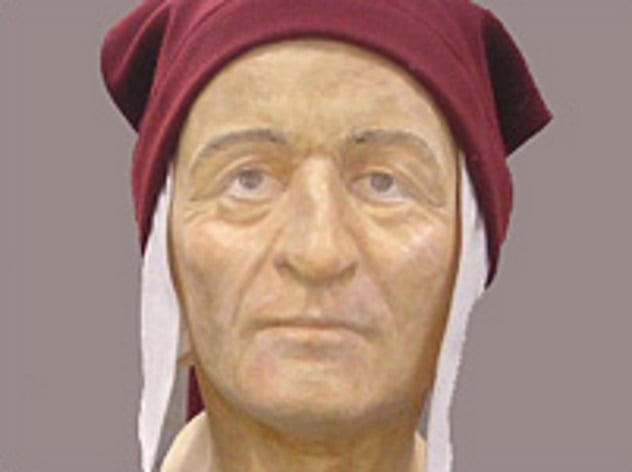 It should not perhaps surprise us that Dante, the poet of the Christian afterlife, has had a bit of a complicated time after his own death. A renowned poet in his own life, he was exiled from his beloved Florence. When he died, he was buried in Ravenna. Recognizing that they had cast out one of their geniuses, Florence wanted his body back, but the monks in charge of his grave hid his bones. Florence has had to suffer without his corpse since then.

A man as famous as Dante always has paintings made of him, but most of them are quite ugly. His cheeks hang down, and his nose points at his chin. In 2007, researchers used measurements of Dante’s skull to see if he really deserved this artistic treatment.[5] The reconstruction suggests that Dante was no worse-looking than many people, and his distinctive features in many paintings were the product of poetic license rather than true to the poet himself.

Henri IV of France was beloved in his time. Well, as beloved as a king who ended up getting assassinated can be. He was tolerant of other religious faiths and liked a good time. Henri was known as a philanderer, something which only endeared him further to his subjects. Even the fact that his feet and armpits stank of garlic did not seem to have harmed his popularity. Long after his death, however, during the French Revolution, his corpse was disinterred and desecrated.[6] Somehow, his head became disconnected and ended up in the attic of a tax collector.

The facial reconstruction performed on the skull revealed a face very similar to those shown in official portraits. Not all of the king’s descendants accept that the skull really is that of Henri, and for now, it sits in a bank vault in Paris. 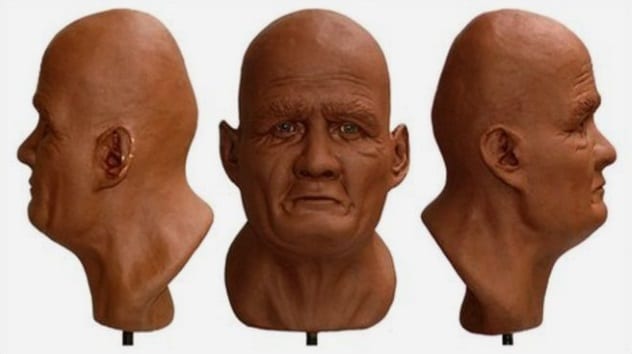 It’s not only kings who can misplace their heads. Simon of Sudbury is unfortunate in that he was still alive when his was removed—with eight brutal blows from an ax. Simon, archbishop of Canterbury, had made the unfortunate choice to become lord chancellor of England in 1380, when the country was at war and broke. The jewels of the young King Richard II were pawned, but to continue the war with France required the vast sum of £160,000. It was decided that a poll tax would be levied. This proved a mistake, as it provoked the Peasants’ Revolt, which led to Simon being beheaded.[7]

His head was speared onto a pike and paraded around the city before being recovered. Today, it rests in a church, but it has been used to reconstruct the unfortunate archbishop’s appearance. Looking a little like Shrek, the chancellor would have been a very distinctive person in life. Hiding from his enemies was probably not an option.

3 The Lady Of Cao 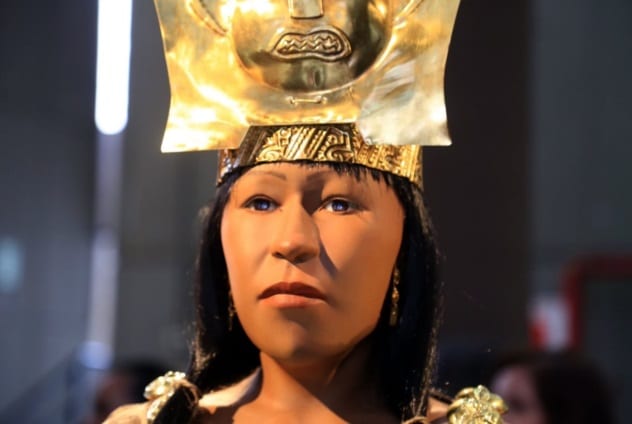 In 2006, a mummy was discovered in Peru. Though well-preserved, the Lady of Cao died roughly 1,500 years ago. Those who buried her had not set out to mummify the young lady; the conditions just happened to be right to dry her body before it rotted. Her corpse remained in such a good condition that her tattoos of snakes, spiders, and crabs could still be seen. Because of the high-status items found with her and the location of her burial, the Lady of Cao made her discoverers reconsider what they thought they knew about Moche society. Ladies, it seems, could be leaders.

By laser-scanning the face and skull, researchers were able to recreate her appearance at the time of her death.[8] Only in her twenties, there is some evidence that the Lady of Cao died shortly after childbirth. By comparing the reconstruction of her face to those of women currently living in the area, it was found that face and skull shapes have changed relatively little in the intervening centuries. 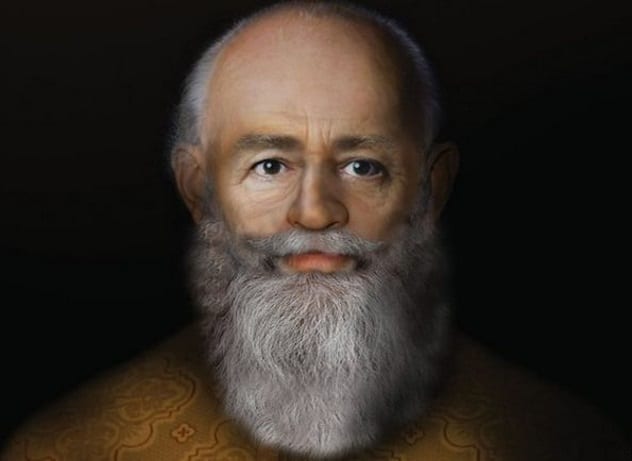 Santa Claus is a real person. Or at least he is based on a real person. Saint Nicholas was a fourth-century bishop who lived in modern-day Turkey. He gained his reputation as a gift-giver because of his habit of covertly leaving small presents for the needy. In one case, he is said to have thrown small bags of gold through a window, an act which saved three girls from being forced into prostitution. According to legend, the bags landed in stockings and shoes left by a fireplace. While many children would dearly love to see Saint Nicholas on Christmas Eve, those who actually want to see his face would have to travel to Bari in Italy, where his remains are held.

In 2014, these remains were used to recreate the saint’s face.[9] Saint Nicholas had at some point suffered a badly broken nose—so bad that it cracked the bones between his eyes. This failed to heal straight and would have given the saint’s nose a dramatic twist. This may have been the result of torture the saint is said to have endured during a persecution of Christians. 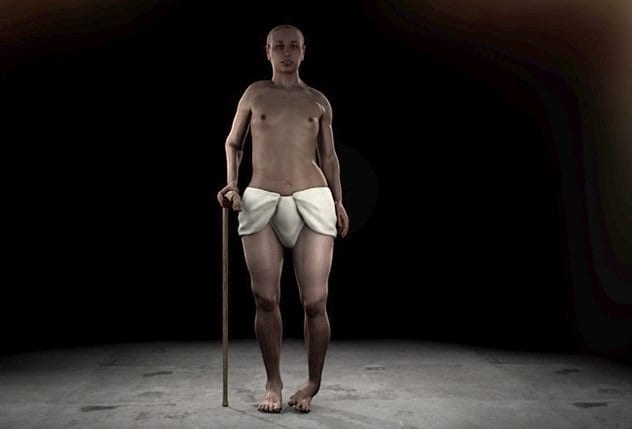 Tutankhamun has one of the most recognizable faces in all of history. The golden mask of his sarcophagus is instantly familiar and has pervaded our culture ever since its discovery. Yet for all the splendor of his tomb, Tutankhamun was a relatively minor pharaoh. The mask shows Tutankhamun as the ideal of a perfect young king. The truth was rather more disturbing.

Medical studies of the pharaoh’s corpse have shown that he had a club foot, malaria, and suffered because of the incestuous marriage of his parents. It is likely that when Tutankhamun walked, he required a cane to support him. Many canes were found in his tomb.

In contrast to the gilded youth of his sculptures and mask, Tutankhamun in life looked rather ungainly.[10] He suffered from a pronounced overbite and a slightly malformed skull. Perhaps the mask made for him showed the face he wanted to be known with in eternity.