The beluga is an icon of the sea. The porcelain body is recognizable at a glance, but few are aware of the whale’s amazing abilities and propensity for making the news.

From talking like a person and sharing a rare biological quirk with humans to carrying military equipment to surprised fishermen, belugas are more than just cute faces. They have a bubble language, adopt other whales, and apparently have a job somewhere in the Russian forces.

10 One Visited The Thames 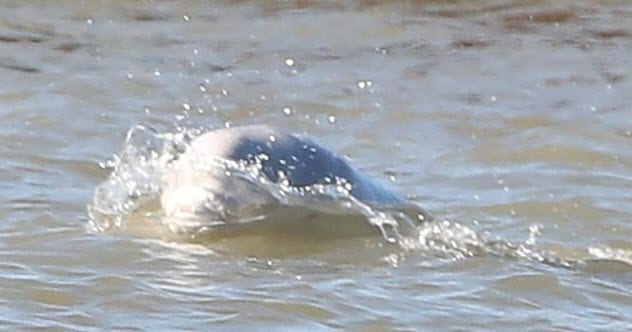 Belugas are Arctic animals, but one made his way to the River Thames in the United Kingdom. Nicknamed “Benny,” he attracted quite a following upon his arrival in 2018. He appeared to be a subadult that took a wrong turn somewhere, but Benny’s behavior showed he was in good form.

The beluga fed and explored the Thames for days while fans gathered on the banks and animal welfare organizations kept a constant vigil. The Port of London Authority (PLA) also gave the whale the right of way.

PLA urged all waterborne vessels and companies to avoid the odd visitor. Belugas are as much at home in rivers as in the ocean, which was probably why this one took a fancy to the Thames. In fact, Benny stayed for months.[1] 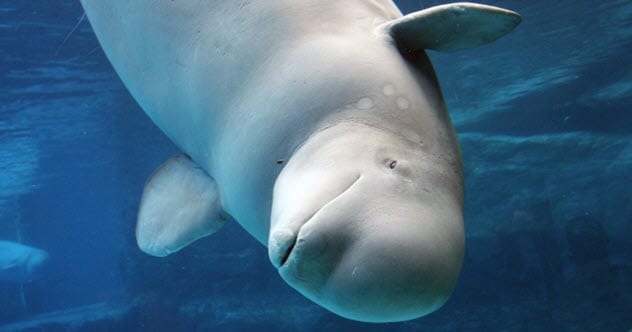 Humans and certain whales have an odd thing in common—menopause. The rest of the planet remains fertile for as long as they live. In 2018, it was discovered that both narwhals and belugas experience menopause. This increased the tiny club to five members—humans, orcas, short-finned pilot whales, and the two new additions.

As life is about reproduction, menopause is a bit of a mystery. Women and whales live for decades after their fertility ceases. Technically, they could have had a lot more offspring. But as they grow older, they might be more valuable as grandmothers than experienced females occupied by yet another infant of their own.

Over the years, anthropologists gathered enough evidence that grandmothers are instrumental in helping grandchildren thrive. She brings the knowledge and time that her own children might lack as new parents.

Orca mothers keep feeding their adult sons, probably to increase these males’ chances of producing offspring. Unfortunately, the habitat of belugas and narwhals are too remote for the multigenerational study needed to see if their grandmothers bring anything to the table.[2]

Little Grey and Little White were both born in captivity. For the last seven years, the belugas entertained visitors at a Chinese water park. The fact that they lived in a concrete tank did not make animal rights activists very happy.

However, it was not as easy as dumping the pair back into the ocean. To hurl a captive-born-and-raised beluga into the sea will kill it. Recently, a conservation group called Sea Life Trust came up with the answer. The organization created a world first—an open sea haven for whales and dolphins. More specifically, it was a retirement home for oceanic animals leaving show business.

Located near Heimaey, an Icelandic island, the sanctuary forms part of the local bay. In 2019, the 32,000-square-meter (344,000 ft2) area welcomed the belugas as the first retired entertainers. Both aged 12 years old, they underwent survival training before their release, which will hopefully see them spend the next 40 years or so in a safe habitat.[3]

7 Cat Poop Is A Danger 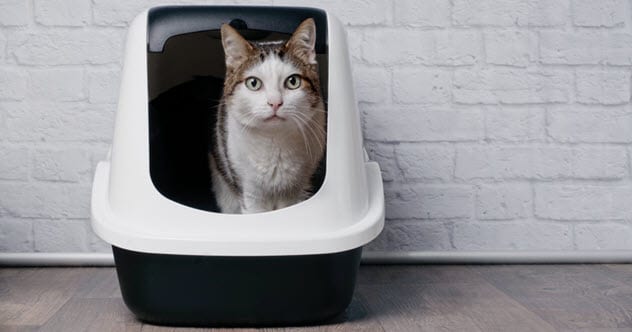 Between 2009 and 2012, around 34 belugas died in Canada’s St. Lawrence Estuary. In 2018, scientists had a look at the hearts and brains of these animals. The tests were designed to screen for a parasite called Toxoplasma gondii. This devastating pest causes toxoplasmosis. The condition affects animals neurologically and has been found in fatal cases involving other whales and dolphins.

The analysis showed that 15 of the belugas were infected. T. gondii is a common cat parasite. It is notorious for spreading to other species, usually through contact with feline feces. It is thought that marine animals living near freshwater outflows into the sea, like the St. Lawrence pod, face a greater risk of infection.

Many people tend to flush their cat’s litter down the toilet. The parasite is resistant to sewage treatments and then flows downstream toward the ocean. Even though T. gondii has also been identified as the killer of monk seals and sea otters, researchers could not determine if this was the cause of death for the 15 belugas.[4] 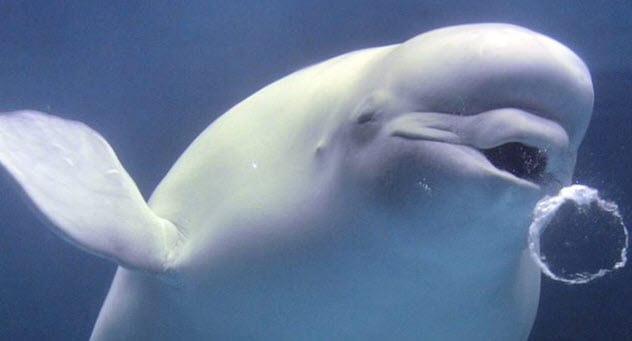 At Marineland of Canada, researchers took eight years to stare at 44 belugas. The reason? To unravel the whales’ most whimsical side. Belugas love blowing bubbles, but the sheer variety suggests communication.

Bubble blowing has rarely been observed in the wild and never compared to those of aquarium whales. There is always a chance that captivity could change communication, but here is what they’ve figured out so far.

Certain bubbles appear to reflect certain states of mind. Females are more playful and release bubble rings or a slow froth of tiny bubbles more often. One of the most impressive displays is a huge bubble ring through which the beluga often swims.[5]

The Marineland belugas shoot water jets at the rings or swat them with their tails. Bubbles seem to double as communication and a fun hobby. However, when feeling threatened, the whales forcefully expel bubbles from their blowholes as a clear warning to back off.

Some bubbles remain undeciphered. Researchers still do not know why males cruise alongside each other while releasing a steady stream of bubbles.

A Narwhal in the St. Lawrence River

In 2018, researchers visited Canada’s St. Lawrence River. They wanted to learn more about belugas’ social behavior and got more than they bargained for. The group of 50–60 whales was believed to be a bachelor pod or at least mostly male.

What the scientists did not expect was the presence of a young narwhal male. This whale species is famous for its unicorn-like tusk. The belugas appeared to have adopted the subadult even though he had a horn, had a dark gray body, and was a foreigner that normally swam 965 kilometers (600 mi) north of the river. They even played games.

Narwhals have unique body marks. When this one’s patches and scratches were checked, the scientists realized that it was the same one that had frolicked with the St. Lawrence pod in 2016 and 2017. This long-term bond is unusual because the two species rarely make an effort in the wild to interact. Even when belugas and narwhals cross paths, the moment usually passes.[6] 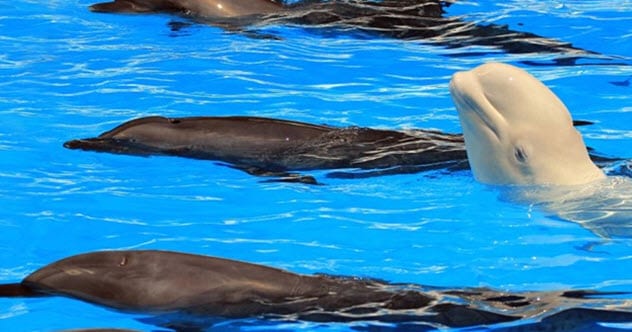 In 2013, a group of dolphins got the fright of their lives. Housed at the Dolphinarium Koktebel in Crimea, the latest addition to their tank was a beluga. Her white body was enough to scare the bottlenose dolphins, but worse, she sounded funny. The dolphins could not speak “beluga,” and the newcomer could not speak “dolphin.”

That changed quickly. The new girl settled in and was accepted. Within two months, the beluga whistled like a dolphin. In that time, the whale phased out her own native tongue and eventually dropped beluga calls and sounds entirely. She even used “signature whistles,” which equate to an individual’s name among dolphins.

This is an amazing feat, undoubtedly driven by the fact that belugas are powerful mimics and social animals with a desire to fit in. Researchers are not sure how much is mimicry and how much “dolphin” the beluga actually understands. One thing was clear, though. The dolphins accepted their strangely pale friend but made no attempt to learn or imitate her native language.[7] 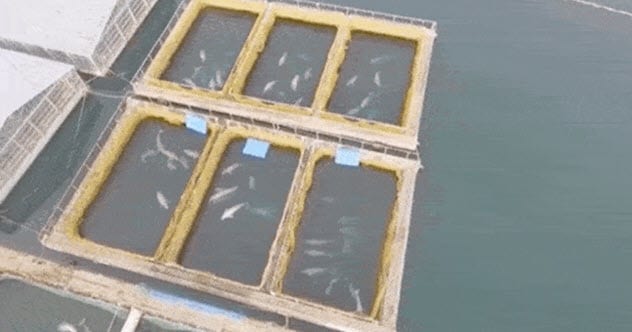 The rarity and beauty of belugas make them a hot item at aquariums. Sadly, not all of them are acquired humanely. Recently, an illegal facility was discovered near the coast of Russia. The marine cells held over 100 whales poached from the wild, including 11 orcas and a whopping 90 belugas.

Reports circulated that the animals were destined for Chinese theme parks, something strictly forbidden under international law. Videos of the cramped enclosures went viral and caused global outrage.

Despite all the environmentalists, drones, and news crews keeping an eye on the situation, an orca and three belugas vanished. Many suspected that they died in the overcrowded conditions.

The Russian government came to an agreement with two environmental groups to rehabilitate and release the rest. This will require a careful approach because many of the whales are still babies.

While the groups involved are dedicated to the process, they said that the black market demand for belugas and orcas remains a problem. It is not hard to see why. A single killer whale can sell for up to $6 million.[8] 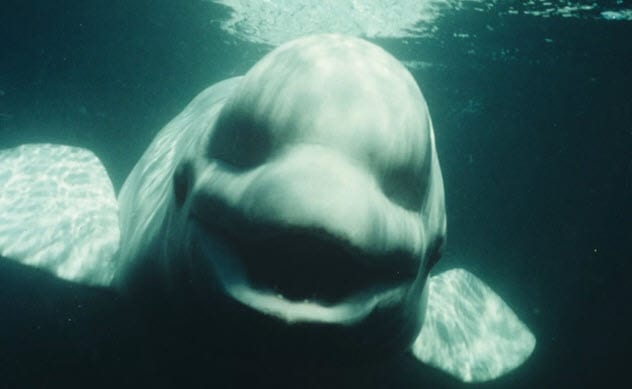 Imagine diving at the National Marine Mammal Foundation in San Diego. Then somebody tells you to get out of the tank. However, the only mouth nearby belongs to a beluga called Noc. This really happened in 1984 when researchers began hearing “human conversation” from the area in which they kept the dolphins and whales.

They managed to narrow the sounds down when the diver heard the word “out” and the scientists realized that the vocalizations came from Noc. He apparently picked up a few words after listening to staff conversations.

Thoroughly encouraged by snacks, the beluga repeated his human sounds into a recorder. The analysis revealed interesting facts. To produce the sounds, Noc had to use parts not normally used by whales when they communicate. He adjusted the air pressure in his nasal tract, manipulated liplike valves, and overinflated air sacs beneath his blowhole.[9]

Researchers had never heard anything like it. His vocal rhythm was similar to a human’s and not typical for a whale at all. Beluga whales are great mimics and so vocal that they are known as the “canaries of the sea.” Even so, Noc’s feat remained remarkable. 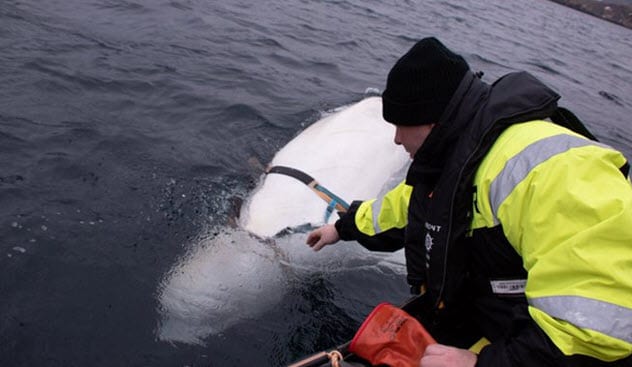 In 2019, fishermen off the coast of Norway encountered a surprise. A lone beluga whale approached their boats in a very tame manner. But that was not what had the humans scratching their heads. The beluga was wearing a harness, looking like a dog about to go for a walk.

Soon, its behavior took on a pattern. The creature would seek out humans and then attempt to rub the harness against their boat as if seeking to get rid of it. The fishermen fetched marine biologists, who lured the geared-up whale closer with tasty cod fillets.

While the animal snacked, a diver removed the harness. The attire had a camera mount and carried the words “Equipment of St. Petersburg.” The Norwegians checked with their Russian counterparts, scientists who agreed that it was probably the Russian military’s doing.[10]

In fact, the Putin regime retains an interest in using sea mammals to guard bases, kill intruders, and assist divers. In all likelihood, this whale managed to escape such a naval facility.