Smell is most ephemeral of senses. We can easily imagine how the past looked, but rarely do we think about how it smelled. Given the lack of hygiene for much of human history, perhaps that is for the best.

But for as long as there have been bad smells, humans have been trying to cover them up—and so perfume was created. Here are ten facts about the history of perfume and why it is much weirder than you think.

10 The First Named Chemist Was A Perfumer 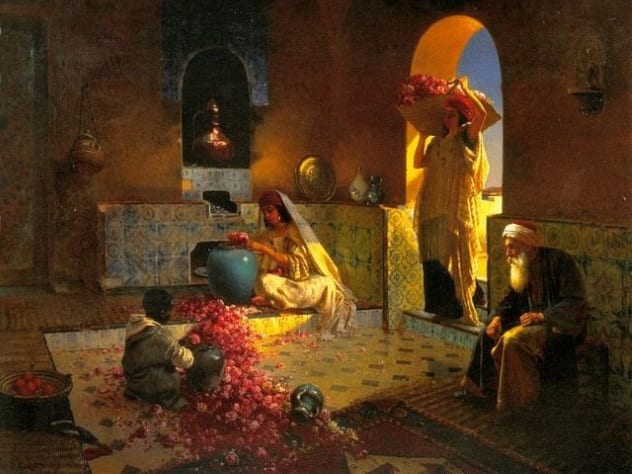 Perfume has a long history, and it is partly through the desire to smell nice that many of the techniques used by later scientists were developed. It is in a cuneiform tablet from Babylon in 1200 BC that the names of the first chemists are recorded.

Tapputi was a woman who worked in the palace of the Babylonian kings making the perfumes used to scent the royal court. Records show that she used flowers, oils, grasses, myrrh, and balsam to create her scents. By adding water and other solvents, she was able to extract the aromatic essences. The tablet which mentions Tapputi is also the earliest known reference to a still—a piece of equipment still found in labs around the world—used for distillation.[1]

For her work, Tapputi was given the title belatekallim, essentially meaning “female overseer of a palace.” The ancient text also mentions a female assistant to her work, but unfortunately, the tablet is damaged, and most of her name is lost, leaving Tapputi as the first named chemist in the world. 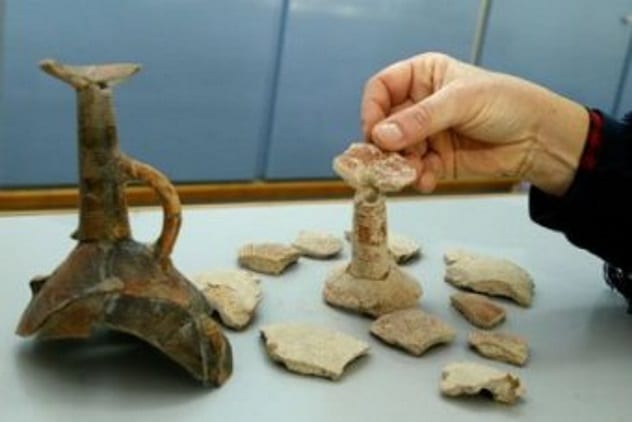 The oldest perfumes discovered long predate written history in Europe. For example, on the island of Cyprus, a perfume factory dating from 2000 BC has been discovered. This Bronze Age site is littered with pottery vessels that held perfumes. Because of the size of the complex and the amount of perfume found, it seems likely that the perfumes made there would have been exported across the Mediterranean.

The complex of buildings discovered show a range of industries taking place at the same time. Wine making, copper smelting, and olive presses have all been found. Perfumery may not immediately seem to mesh well with these, but olive oil was a vital ingredient for the perfumer.

To make a perfume in the ancient world, the smells of natural products had to be extracted. Since many aromatic chemicals are not soluble in water, some form of oil had to be used, and olive oil was readily available. Even at the time of the discovery’s announcement in 2005, archaeologists had already found 12 perfumes at the site, all steeped in olive oil.[2]

8 Sweat Of The Gods 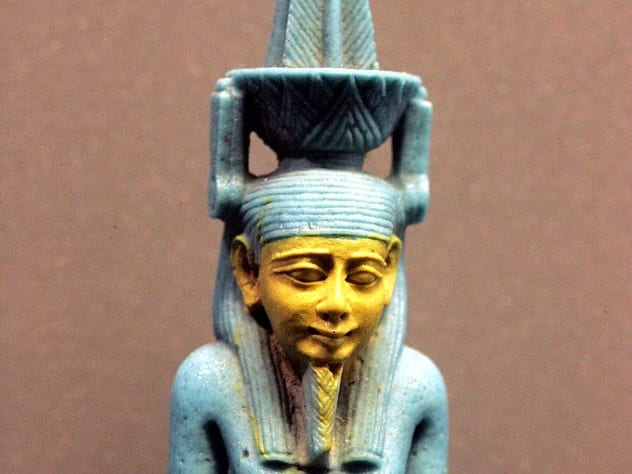 Perfumes were particularly important to the ancient Egyptians. The believed that perfumes were the sweat of the sun god Ra. To walk through a room filled with aromatic aromas was to walk with the divine.

The Egyptians even had a god of perfume, named Nefertum, who was responsible for the art of creating scents.[3] As well as simply smelling nice, it was thought that perfumes had the ability to heal—as when Nefertum cured Ra of sickness by presenting him with sweet-smelling flowers.

Hieroglyphic evidence shows perfumes being made in Egypt at least 5,000 years ago. From later sources, we know that outsiders found the Egyptian addiction to perfumes somewhat baffling, even as other cultures paid fortunes to import them. Pharaohs and other high-ranking individuals were often buried with perfumes so that even in the afterlife, they would not have to encounter any unpleasant smells. 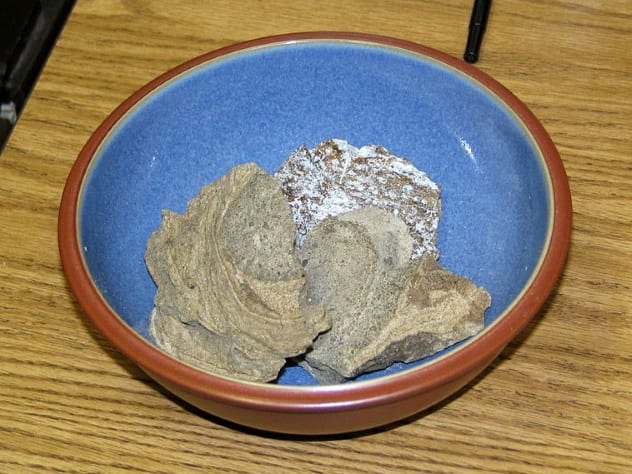 Sperm whales may not sound like they should be major players in the perfume industry, but for centuries, they were without anyone even knowing it. Ambergris is a light and waxy substance that sometimes washes up on shore. It has a unique aroma, and that made it the perfect base for perfumes.[4] Anyone finding a lump of the stuff by the sea could (and still can) sell it for a lot of money. It was only when sperm whales began to be regularly hunted that people discovered ambergris was actually produced by the whale’s digestive system to protect it from squid beaks. Before people really understood where diseases come from, one of the most popular theories was that they were carried on bad air. This miasma theory made some sense, as sources of infection often do smell foul. Unfortunately, covering them up with pleasant smells doesn’t get rid of germs.

During times of plague, huge bonfires were often lit in the streets of cities to drive off the bad air, while people burned herbs inside their houses, hoping the smoke would purify their home. One rich man stood in the middle of several fires to ensure that no bad air could reach him. Those looking to really ensure good health often took up smoking tobacco in a pipe to keep a source of smoke nearby.

Doctors who dealt with many plague victims sometimes wore beaked masks over their faces. Inside the beak would be stuffed as many pungent herbs as possible to stop them from breathing in the foul airs of their patients. For non-medics, a more elegant solution was the pomander—a small container of perfume.[5] These were often beautifully crafted in silver or gold and could be held up to the nose whenever one felt at risk of infection—or was simply in a less classy area of a city. 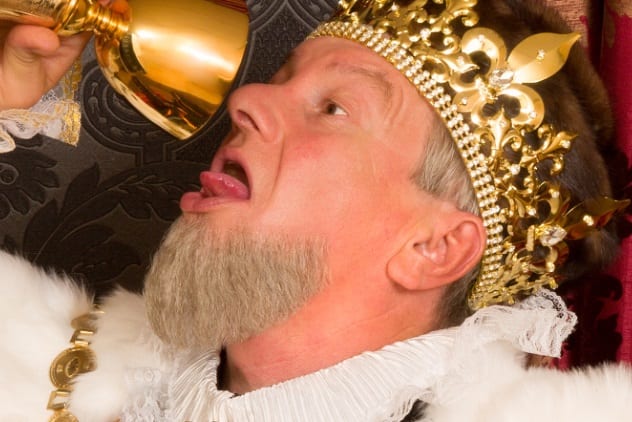 It has already been pointed out that many aromatic chemicals are not soluble in water, but mixing them with oils creates more problems. Few people want to start their day smeared with oil. A breakthrough came about with the ability to distill alcohol. Now, perfumes could be mixed in a way that left little residue. One of the first alcohol-based perfumes in Europe was known as the Queen of Hungary’s Water, or simply Hungary water.

According to legend, this perfume was first made in the 14th century for either a Hungarian saint or, as the name suggests, for a queen. No one is quite sure where the recipe came from, but it soon spread across the continent. It was rumored to do everything from curing gout to rejuvenating aged faces. Everyone seemed to have their own way of making it, but they often involved brandy and the steeping of various herbs.

People also had different ways of using it.[6] It could be sprayed or dabbed on the skin like any perfume, but it could also be used in a bath. There were also those who found its alcoholic content just too tempting. Drinking Hungary water became a popular remedy for all manner of illnesses. At the very least, the alcohol might make you forget your troubles. 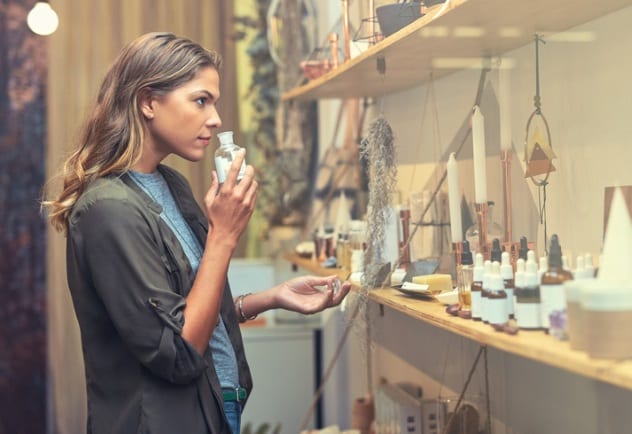 Humans are thought to have relatively poor senses of smell. Compared to animals like dogs that can sniff out everything from drugs to cancer, humans might as well not have a nose. We have around 400 types of odor receptors in our noses, and it was once thought that we could recognize around 10,000 different smells at most. More recent research, however, indicates that we have a lot more choice in our perfumes than we imagined.

By mixing vials of different odors, researchers found that humans are a lot better at sniffing out the difference between scents than had been thought. They found that the lower limit for the number of smells a human can recognize was around one trillion.[7]

One of the problems humans face, though, is that our languages are very poor at describing what it is we are smelling. While we can describe sounds and sights with unique terms, when it comes to smells, we most often say something “smells like” something else. 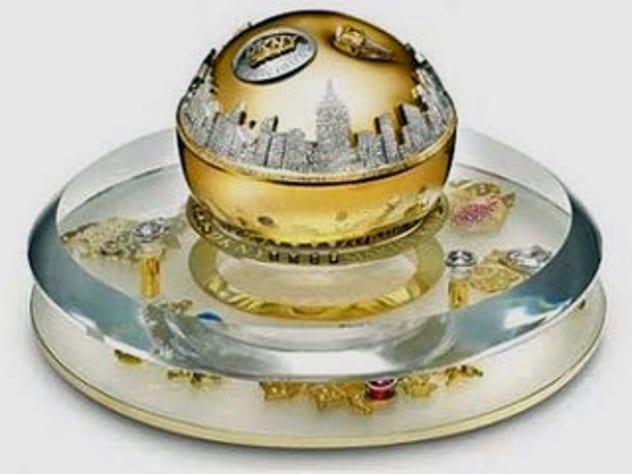 Perfumes can get pretty pricey. Because luxury brands want to use the most exclusive ingredients, it is understandable that they have to charge a lot for their products. To make one bottle of Chanel No. 5 reportedly takes 1,000 jasmine flowers—all picked by hand. But this does not even begin to scratch the surface of the glittering world of expensive perfumes.

Clive Christian’s Perfume No. 1 is already quite expensive when bought on its own. A small bottle costs several hundred pounds. But the way he packages them can push the value of a bottle up into the thousands. One set was sold in a crystal bottle with gold trimmings and a five-carat diamond attached. Another was set with over 2,000 diamonds. As to what the perfume actually smells like, the website is unusually quiet.

But perhaps the most expensive bottle of perfume ever was a container of DKNY Golden Delicious perfume.[8] This bottle took 1,500 hours to create and was put up for sale for $1 million in 2011. For this, you not only got some perfume but also a bottle set with tourmalines, sapphires, rubies, and diamonds. Of course, if you want to buy it in a plain bottle, DKNY Golden Delicious can be snapped up for a few tens of dollars. 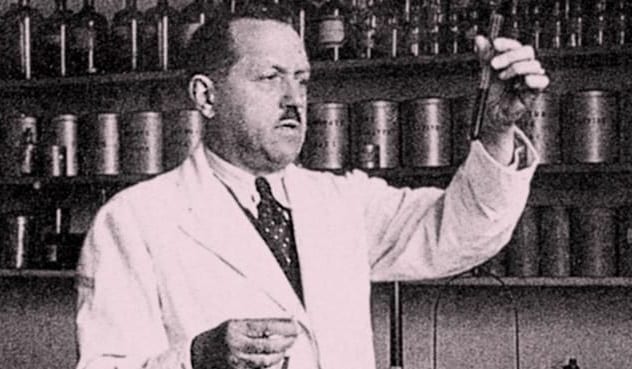 You may have a nose, and I may have a nose, but we are not noses. In the world of perfumery, the people who craft scents are simply known as “noses.” Theirs, after all, can be worth a fortune if they strike the right balance of aromas to create a bestseller.

Noses study for many years to learn the basics of mixing a perfume. They have to be able to identify a vast number of smells and ingredients if they are to learn to mix them. Special schools train noses, and many of the big perfume companies work hard to train noses of their own.

One of the most famous noses of the 20th century belonged to Jean Carles. He created many of the most famous perfumes of the century before setting up his own school for training new noses. His method of teaching smells is still widely used today. Since his nose was so important in the world of noses, it is said that he had it insured for $1 million.[9] Some people cannot stand perfumes at all. Even the fanciest can leave them struggling to breathe. Other people just react badly to specific odors. Perfume is in the nose of the beholder. But sometimes, a perfume is simply objectively strange.

For those who just can’t get enough hamburger in their life, in 2008, Burger King launched its own Flame body spray that offered to bring the scent of flame-grilled meat to the perfume world. Other foody scents have been released, ranging from BBQ pork belly to bacon.

One company dominates when it comes to the slightly unusual in perfumery, however. Demeter offers a fragrance library that ranges from Grumpy Cat fur aroma to Spacewalk—the smell of outer space.[10] You might think the hard vacuum of space would be odorless, but astronauts say it has a harsh metallic scent when they come back inside.

So whether you want to smell of giant sequoia or a humidor, know that someone out there is making just the perfume for you.

There’s more to perfume than meets the nose. Read more about it on 10 Ridiculous Perfumes That Might Seduce You and Top 10 Bizarre Ingredients In Perfume.