“Food fight!” is a call which has echoed through many school playgrounds and dining halls throughout history. However, this seemingly childish waste of food is not restricted to juveniles.

In many cultures around the world, a food fight has been part of end-of-harvest traditions and a fun way to dispose of inedible food. Other events have drawn on early 20th century comedians to develop food throwing contests in the name of charity. Whether they are traditional rituals or just very messy fun, here are ten food fights you can join in on your travels around the world.

Residents in the Spanish town of Haro in the La Rioja region, which is known for its wine, have an usual way of showing their thanks for the plentiful grape crops. At the festival of Saint Peter in June each year, they don’t just drink the region’s produce; they throw around 70,000 liters (18,500 gal) of red wine at each other. Festivalgoers must wear white, with a red sash. Armed with water pistols and buckets, they spend an hour dousing each other in the region’s famous wine.[1]

The Haro Wine Festival covers two days, but for an hour or two on the second day, thousands of people converge on the town for the famous Batalla del Vino (Wine Battle). The wine fight dates back to the sixth century and a dispute over town boundaries with neighboring villages. The battle continues until the wine kegs are empty, and everyone is drenched in red wine.

9 Battle Of The Oranges
Italy

Traditional ‘Battle of the Oranges’ rages in Ivrea, Italy

Hurling oranges at people is part of the Carnival of Ivrea, which is held in the eponymous Italian town.

While there are many Italian festivals which involve throwing food at one another, the orange fight is the largest food fight in Italy. Tons of oranges are thrown during the reenactment of the town’s liberation from a medieval tyrant, Marquis William VII of Montferrat. Teams of aranceri (orange throwers) parade through the streets, both on foot and in carts, representing the villagers of the past throwing stones at the tyrant’s troops.[2]

If you don’t want to don protective gear and get involved in the event, make sure to wear a specially marked spectator’s hat to avoid getting hit by fast-flying citrus. 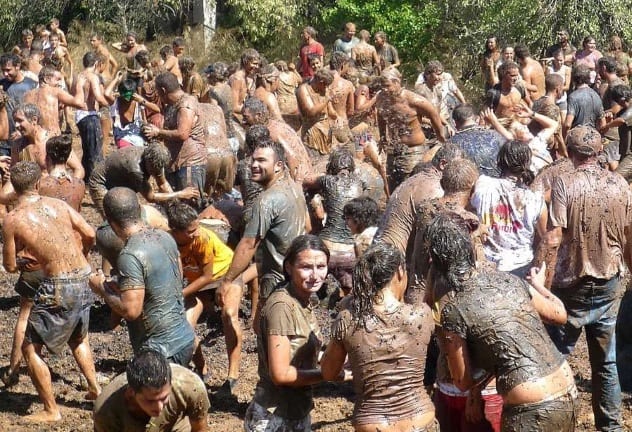 A massive grape battle is part of Binissalem’s two-week La Festa des Vermar, a grape harvest festival. Once the grapes are harvested, the Mallorca town becomes a full-on party zone. The grape battle originated from villagers gathering the grapes which had gone bad and throwing them at each other for a bit of fun.

A rocket is fired in the town square, signaling the beginning of the grape war, with competitors filling their hands with as many mini-missiles as possible to hurl at their opponents.[3] The battle continues until the square is a sticky mess, everyone is covered in grape pelt, and not a single unused grape remains on the ground.

Throwing a rotten tomato at someone is never seen as a friendly gesture. However in Bunol in Valencia, that is exactly what the villagers do at the end of each August.

The tomato fight began not as part of a harvest festival as with other food fights but after a tussle over a position in a parade in 1945. Some young boys decided they wanted to be part of the parade. Their actions led to another participant falling over. This man flew into a rage and started throwing punches. This snowballed into people pelting each other with fruit, and the fun continues today as the biggest organized food fight in the world.

The event was banned for many years, but tourists today flock to the town for the tomato fight. Around 120 metric tons of overripe red tomatoes, which would otherwise have been dumped, are trucked into the festival area. Everyone attempts to gather up as many tomatoes as possible to hurl at other members of the crowd in an epic food fight which lasts an hour.[4]

Shortly after Christmas each year, the Valencian town of Ibi erupts into a massive egg and flour fight. The Els Enfarinats festival on the Day of the Innocents, December 28, dates back over 200 years.

On the eve of the festival, men dressed in blankets parade through the streets, reenacting events which have occurred during the past year. The next morning, the “Enfarinats” dress in mock military garb to stage a mock coup. The race is on to grab the mayor’s ceremonial mace, thus taking control of the city and imposing ridiculous laws. Citizens are fined for breaking these laws, with the funds raised donated to local charities.

The citizens then fight against the Enfarinats with eggs and flour. Hundreds of eggs and hundreds of kilograms of flour are catapulted through the streets, with flour-filled firecrackers and even fire extinguishers used during the mock battle. “Flour power” inevitably wins the day, and the city is restored to order at the conclusion of the festival.[5]

Many people don’t really like fruitcake all that much, so in Colorado, they have a unique way of disposing of these seasonal leftovers. Manitou Springs residents gather at the end of January each year to devise the most unique means of tossing leftover fruitcake into the air.[6]

After donating a nonperishable food item to a local food bank, contestants line up to see who can launch their fruitcake the farthest. Hand tossing, slingshots, and even cannons have been used to propel the Christmas leftovers. In 2007, a group of Boeing engineers devised a propulsion method which saw their fruit cake reach a record 433 meters (1,420 ft).

The fun annual food competition includes dress-up events and also provides “rented” fruity missiles for those who have actually finished their fruitcake. There’s even a bake-off for those who actually like fruitcake.

Pie-in-the-face routines were a staple of early filmed comedy. Inspired by comedian Charlie Chaplin’s antics in the movie Behind the Screen, the town of Coxheath in Kent holds an annual custard pie throwing championship in June each year.[7]

Villagers and visitors in Coxheath have been lining up to hurl pies at each other since 1967. Teams of pie throwers assemble from around the world, donning the fancy dress which is usually expected at these madcap events. They compete under hilarious team names such as “Pie Dodgers” and “Custard Spies.”

As the pie fight begins, contestants are awarded points according to where their custardy missiles hit the opposition. A direct hit to the face achieves the highest score, whereas missing your target three times could see you getting a penalty. Pies can only be flung with the left hand, with no slingshots or other propulsion devices allowed.

The ancient Spanish festival held in Vilanova i la Geltru has evolved over the centuries from a simple village entertainment into a full-on food fight. The festival offers a range of sweet treats and entertainment over a week leading up to Ash Wednesday, with the highlight being La Merengada, where everyone spends the day throwing sticky meringue at each other.[8]

The Catalonian residents begin the day with a traditional fish meal before heading outside to bomb each other with meringue. Once all the festivalgoers are covered in a sticky morass, it is time for the Batalla de Caramelos, in which tons of candy are launched into the festival crowds.

A bean throwing festival is held on February 3 each year in Japan to celebrate the coming of spring. During Setsubun, roasted soybeans are thrown to ward off evil spirits and ensure good luck during the coming year. Originally a private family festival in which an older male would don a devil’s mask a while the others would throw beans at him, the event has developed into a more public affair.[9]

Bean throwing rituals are carried out at at temples and shrines. It is also traditional to eat one bean for each year of your life. Often, an extra bean is eaten to ward off evil spirits and bring good luck. They can’t be just any beans though; they must be roasted soybeans.

In May each year, thousands of people descend upon Cheung Chau, a tiny island off Hong Kong. Residents spend weeks prior to the annual event baking buns, making masks, and creating papier-mache sculptures of traditional gods, which will be paraded through the streets during the festival.[10]

After a day of music and parades, including the popular “pui silk” parade, everyone assembles outside the temple, where three massive bamboo towers are traditionally studded with sesame, lotus, and bean paste buns. Trained competitors scramble up the the towers at the stroke of midnight to grab as many lucky buns as they can.

Following a 1978 tragedy when a tower collapsed under the combined weight of the buns and the climbers, the event was banned for nearly 30 years. The bun competition was reintroduced in 2005, albeit with new safety measures. Since 2007, imitation plastic buns have been used, but the genuine buns are still available to feast on during the festival.