US President Donald Trump recently ordered a Tomahawk missile strike against the Assad regime in Syria without first seeking Congressional authorization. This has generated controversy regarding the legal powers of the presidency.

According to the US Constitution, the president can only use military force offensively once Congress has declared war on an adversary. The 1973 War Powers Act provided a more flexible alternative, stating that the president could order the military to engage in offensive action for a period of 60 days. After that, the president would have to ask Congress for an Authorization for Use of Military Force.

However, history is full of examples where the president, for various reasons, was able to go to war without any approval from Congress at all. 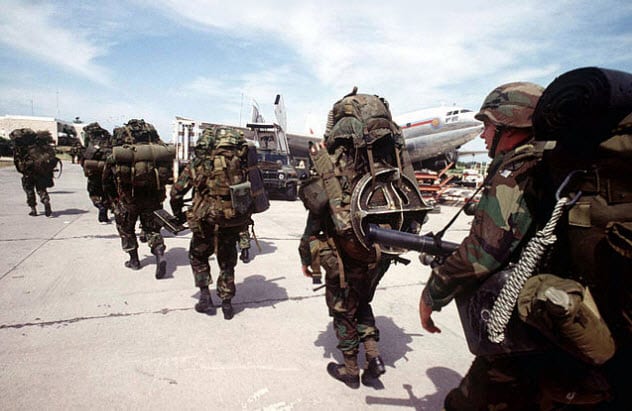 Operation Uphold Democracy involved dropping a massive force, including the entire 82nd Airborne Division, into Haiti. Realizing that they did not stand a chance, the coup government immediately surrendered. Aristide triumphantly reentered the country under US protection.

Both the US public and a bipartisan Congressional majority were initially opposed to the intervention. President Clinton nevertheless argued that a UN Security Council resolution, authorizing the removal of the coup government, gave him the right to act without consent from Congress.

Although the operation seemed like a resounding success at the time, democracy was not upheld for long. Aristide proved to be a flawed leader and was accused of using electoral fraud to stay in power. Ultimately, he was overthrown again in a 2004 coup, which he ironically blamed on the United States.[1] 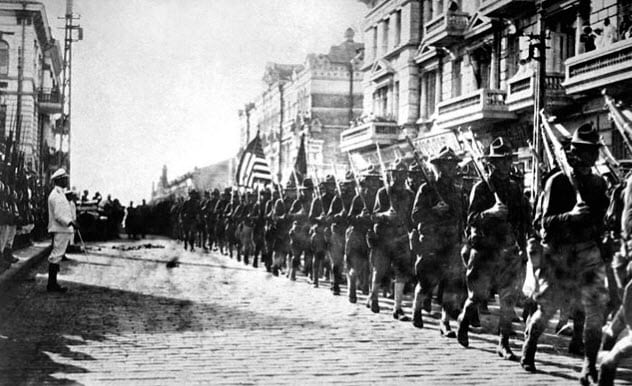 Near the end of World War I, President Woodrow Wilson ordered nearly 8,000 US troops to Siberia as part of a larger Allied intervention. Russia had begun the war on the side of the Allies. However the October Revolution of 1917 resulted in a Bolshevik government, which immediately sued for peace with Germany. The Allies hoped that by helping White Russian counterrevolutionaries remove the Bolsheviks from power, Russia would reenter the war against Germany.

Although the intervention was originally seen as part of World War I, the US troops remained in Siberia even after Germany surrendered in November 1918. In what quickly turned into a quagmire,[2] the US troops fought not only the Bolsheviks but also some of the White Russians they had been sent to help, all while enduring temperatures as low as -46 degrees Celsius (-50 °F). Wilson still wanted to overthrow the Bolshevik government, but public opposition steadily mounted.

The American forces were ultimately withdrawn in 1920, and the Red Army eventually gained control of Siberia. The Allied intervention resulted in lasting hostility between the United States and the Soviet government, which the US did not recognize until 1933. 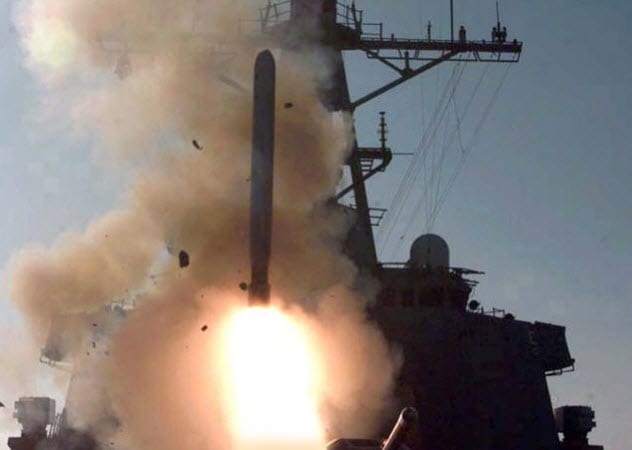 US President William Clinton launched Operation Desert Fox, code name for an intense three-day bombing of Iraq, to degrade Saddam Hussein’s ability to manufacture weapons of mass destruction (WMD). While the bombing substantially damaged Iraq’s military capabilities and infrastructure, it remains unclear if the strikes had any impact on Iraqi WMD development.

Clinton did not seek Congressional authorization before launching the strikes. He argued that the 1998 Iraq Liberation Act provided sufficient legal justification for the campaign. The act stated, “It should be the policy of the United States to support efforts to remove the regime headed by Saddam Hussein from power in Iraq.”[3]

Although the Republican-controlled Congress was inclined to take a hard line against Saddam, the president’s critics noted that the timing of the strikes seemed odd. Desert Fox coincided with the ongoing impeachment debate over Clinton’s perjury during the Monica Lewinsky scandal.

Despite the bombings, Saddam remained in power until Operation Iraqi Freedom in 2003. Meanwhile, the House voted to impeach President Clinton on December 19, 1998, the last day of bombing for Operation Desert Fox.

7 Undeclared War In The Atlantic
1941 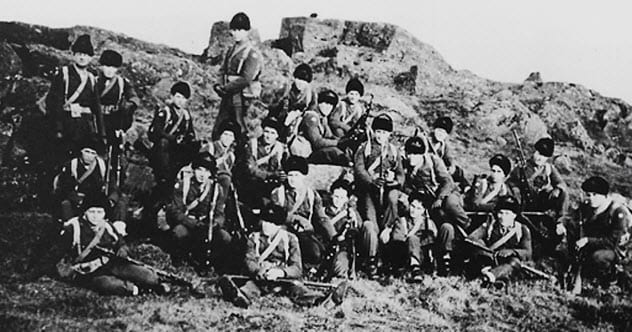 Prior to the attack on Pearl Harbor, most Americans were against entering World War II. Nevertheless, from summer 1940 through 1941, Great Britain was fighting for its survival against Nazi Germany. President Franklin Roosevelt knew that war was inevitable and wanted to secretly help Britain as much as possible.

In May 1940, the British invaded Iceland because they were worried that the Germans would try to use it as a base of operations for their aircraft and U-boats. Soon afterward, Roosevelt sent US troops to occupy the island. This kept it safe from Germany, while freeing the British garrison to fight elsewhere. Roosevelt also gave 50 American destroyers to Britain in exchange for long-term leases on British naval bases in Newfoundland and the Caribbean.

The undeclared war intensified in September 1941 when a German submarine torpedoed an American destroyer near Iceland. In retaliation, President Roosevelt ordered US naval vessels and planes to attack any German submarines spotted in “waters we deem necessary for our defense.”[4] This ambiguous statement amounted to a de facto opening of hostilities a full three months before Germany declared war on the US in December 1941. 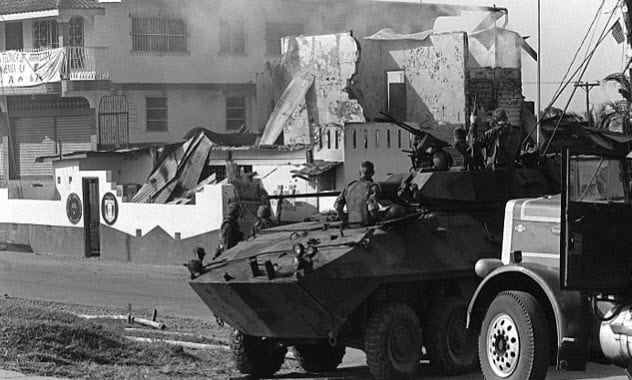 Tensions between Manuel Noriega, the military leader of Panama, and the United States deteriorated throughout the 1980s. The US government accused Noriega of helping drug smugglers in exchange for kickbacks. The final straw came in December 1989 when Noriega’s paramilitary forces guarding a checkpoint fired upon a group of US naval officers stationed in the Panama Canal Zone, killing one.

In retaliation, President George H.W. Bush ordered an invasion of Panama, which quickly neutralized Noriega’s military. Cut off from all avenues of escape, Noriega fled to the Vatican Embassy in Panama City. US troops responded by blasting heavy rock into the embassy, and Noriega surrendered two weeks later.

The intervention was extremely popular both within Congress and among the general public. Since Operation Just Cause was concluded in only 42 days, President Bush beat out the 60-day clock established by the War Powers Act and never had to seek formal Congressional authorization.[5] 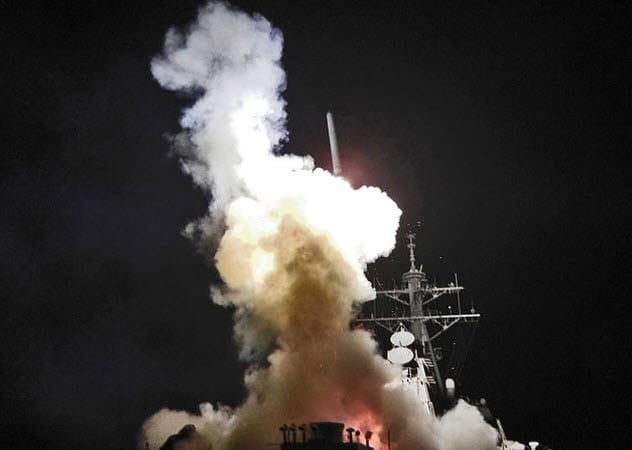 The Libyan Civil War started in February 2011 after dictator Muammar Gadhafi’s security forces began executing Arab Spring protesters who called for his resignation. Although the rebels quickly seized the city of Benghazi, Gadhafi’s troops soon appeared poised to retake the city and unleash a retaliatory bloodbath.

Citing a UN Security Council resolution to protect civilians and impose a no-fly zone, NATO forces began a concerted air campaign against Gadhafi. This quickly turned the tide of war in favor of the rebels.

President Barack Obama did not seek Congressional authorization before launching air strikes. He argued that the War Powers Act did not apply because the US military was intervening in support of NATO rather than fighting alone. Congress did not accept this explanation but had no way of forcing Obama to withdraw.

Ultimately, the air campaign ended in October 2011 after Gadhafi was caught hiding in a drainpipe and was killed under mysterious circumstances. The Libyan intervention is extremely controversial today, partly because of the 2012 assassination of the US ambassador in Benghazi.[6] 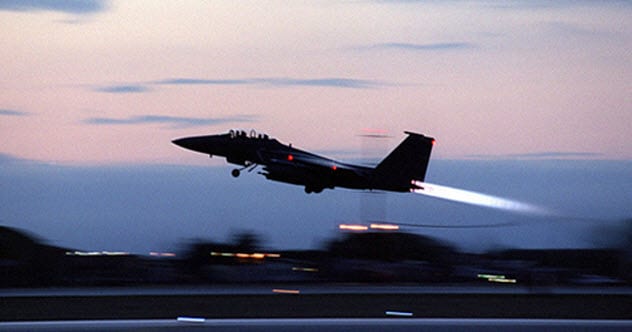 The Kosovo War began as an insurgency by Kosovo Liberation Army paramilitaries who sought independence from the Serbian-dominated Federal Republic of Yugoslavia. In retaliation, the Yugoslav Army responded with a heavy-handed attempt to stamp out the insurgency, massacring civilians and creating a refugee crisis. NATO began a bombing campaign to evict the Yugoslav Army from Kosovo after international attempts to broker a political settlement failed.

Interestingly, President Clinton requested an authorization for the use of military force in Kosovo, which was passed by the Senate. However, the same authorization failed to pass the House after a rare 213–213 tie.[7]

Clinton continued bombing the Yugoslav Army anyway. He argued that Congress had appropriated funding for the intervention, which was basically the same as authorizing it. The Yugoslav Army was forced to withdraw from Kosovo, which eventually gained its independence. 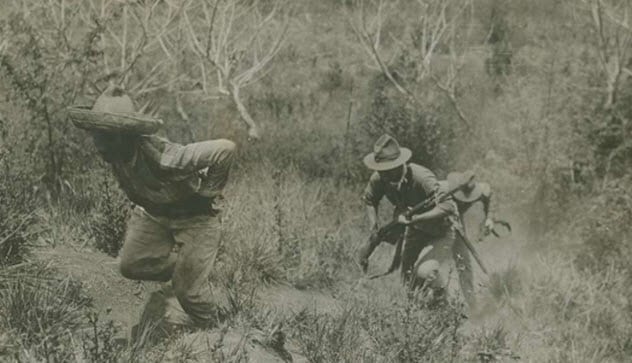 In 1916, the Mexican warlord Pancho Villa launched a raid against the border town of Columbus, New Mexico. It was in retaliation for US support for Venustiano Carranza, Villa’s rival in the ongoing Mexican Revolution.

Although Villa’s forces were repulsed from Columbus with heavy losses, the US public was outraged. President Woodrow Wilson ordered General John J. Pershing and a division of US troops to pursue Villa into Mexico to kill or capture him.[8]

The expedition was justified from a legal standpoint as a defensive action due to Villa’s raid on Columbus. Thus, no declaration of war was required. However, as the term “punitive expedition” would suggest, the intervention was aimed not only at securing US borders but also at retaliation.

The expedition marched over 800 kilometers (500 mi) into Mexico and inflicted severe losses on Villa’s forces. However, US forces were ultimately forced to withdraw due to Carranza’s objections that Mexican sovereignty was being violated. This allowed Villa to escape. 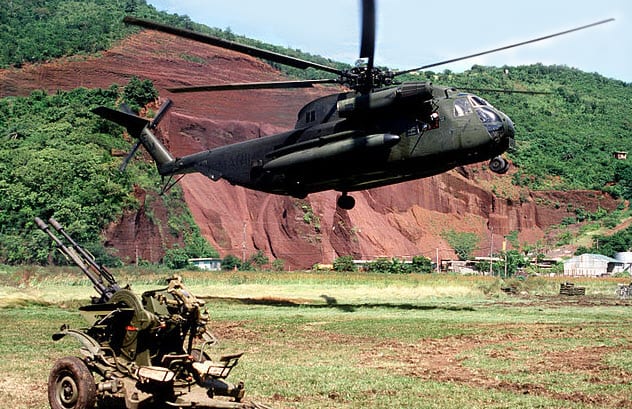 President Ronald Reagan initiated Operation Urgent Fury in October 1983 as a result of ongoing instability in the Marxist-controlled island of Grenada. The prime minister of Grenada had recently been executed in a violent coup, and the new government imposed a strict 24-hour curfew enforced by summary execution. Fearing that US medical students on the island would be harmed, Reagan ordered an invasion.

An air assault quickly captured the only two airports on the island despite heavy resistance from the Grenadians and their Cuban military advisers.[9] Major combat operations concluded within three days, the Grenadian government was replaced, and all US students were rescued safely.

When asked why he did not seek Congressional authorization, President Reagan argued that he had to act decisively to save the lives of the medical students. In any event, the speed of the invasion meant that Congress was presented with a fait accompli. The intervention was condemned internationally as a violation of Grenada’s sovereignty but was extremely popular at home. It even inspired a Clint Eastwood movie. 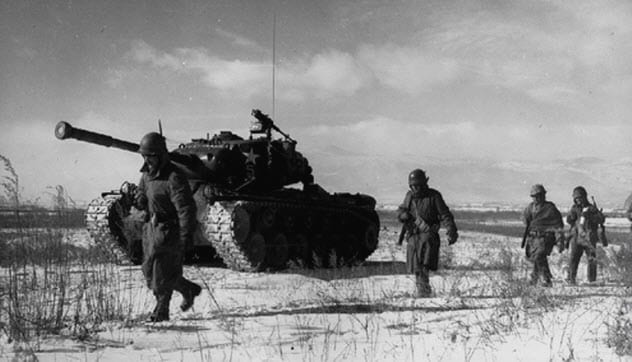 In June 1950, North Korean leader Kim Il Sung ordered a massive invasion of South Korea. This caught both the South Koreans and the United States completely by surprise. President Harry Truman was initially reluctant to send US troops to Korea, fearing that this would lead the Soviets and Chinese to also intervene.

Then, in one of the greatest diplomatic blunders in history, the Soviets boycotted a UN Security Council meeting to protest that Mao’s Communist government had not been given China’s Security Council seat despite winning the Chinese Civil War. The Security Council passed a resolution asking UN member states to assist South Korea. The Soviets were unable to veto it due to their absence.[10]

President Truman used the UN resolution as a justification for US intervention and drove back the North Koreans. Although the Korean War dragged on for three more years in a lengthy stalemate, Truman never requested a declaration of war from Congress. He argued that the war was legally covered by the UN resolution.

Henry is a graduate of the Johns Hopkins University. He currently lives and works in Washington, DC.

Looking for more war lists? Look no further than 10 Mind-Blowing Wars That Nearly Happened and 10 Horrifying Future Wars We Will Live To see.