The ancient pyramids of Giza[1] have wowed mankind for centuries. They tower over the desert landscape, with the Great Pyramid standing a whopping 139 meters (455 ft) high. For many years, the Great Pyramid, believed to have been built by Pharaoh Khufu around 2550 BC, was the largest structure on Earth. The second pyramid is believed to have been built by Khufu’s son, Khafre, circa 2520 BC. The second pyramid also includes the Sphinx, a limestone monument with the body of a lion and ordained with the head of a pharaoh. The third pyramid is much smaller than the first two and is thought to have been built by Pharaoh Menkaure around 2490 BC. Some scientific analysis has determined that these pyramids could be much older than is generally thought, suggesting that Khufu simply claimed the massive structures that were already in place for himself.

Many scientists have concluded that it only took 20,000 workers a period of 20 years to build the Great Pyramid. This is quite astounding, when our history tells that us they only used wooden implements with ropes and pulleys. With all the detail and precise alignments, it is hard to believe that such magnificence could be gained in a 20-year period by so few workers with such limited tools and resources.

Despite all the study of these ancient wonders, scientists still can’t confirm exactly how the pyramids were built. We have not been able recreate them, even on a smaller scale, with the same precision as our predecessors. The technology to do so back then simply didn’t exist, according to current historic teachings. It shouldn’t have been possible for the pyramids to be built. On top of that, the Great Pyramid is the only of the Seven Wonders of the Ancient World to survive.

With some evidence suggesting that these pyramids could predate the Egyptians, there are those who believe that the pyramids could be a mark left by a more advance civilization, much older than 4,500 years. These are the top ten reasons the pyramids of Giza could prove that advanced ancient technology existed.

10 Size And Weight Of Materials 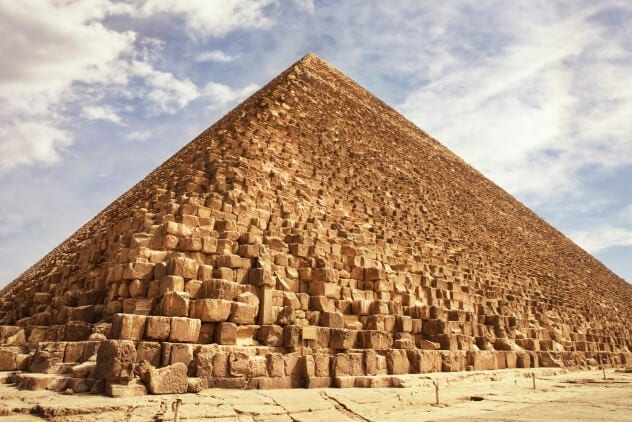 The pyramids‘ massive size alone creates a very persuasive argument that there was some unknown technology involved in their construction. The Great Pyramid, the largest of the three and the largest in the world, consists of 2.3 million stone blocks that weigh 2.5 to 15 tons apiece. According to archaeologists, they were quarried from a nearby source. At such a marvelous weight, how did the workers move these blocks?

It is theorized that large groups of workers would have pushed these massive blocks over wooden ramps. This seems very unlikely, as there does not appear to have been any material, much less any type of wood, that could have withstood the weight of these massive stones. When you do the math for the time frame of the Great Pyramid’s construction, it comes out to workers setting a block every two and half minutes.[2] Seems pretty incredible, if not impossible. 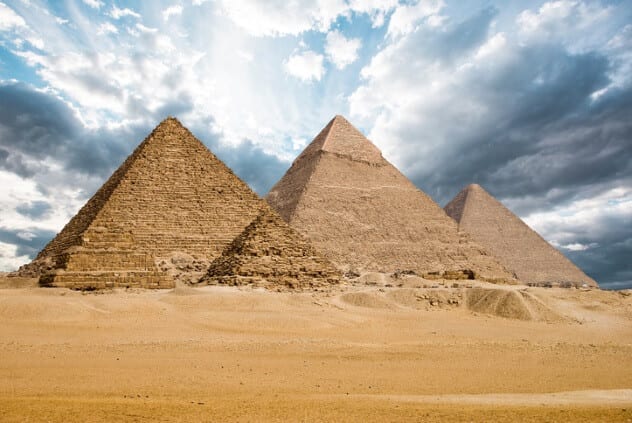 New discoveries are regularly made beneath the Giza pyramids. The tunnel systems found below them truly allude to an advanced civilization. Carved from limestone bedrock, these labyrinths protrude deep beneath the desert and have much left to be discovered. The passageways are always revealing new truths and hidden chambers, unknown to man for thousands of years. A recent find by archaeologist Brien Foerster only strengthens the notion that ancient advanced technologies once existed, long before our time.

While exploring deeper into the mazes beneath the pyramids, Foerster discovered 20 boxes cut with precision from Aswan granite. Each box weighs in at 100 tons a piece.[3] Experts believe these huge boxes were burial places for prized bulls. The only issue with this belief is that no bulls have ever been found. The function of the boxes remains a mystery. Some think they were perhaps used to store an ancient form of energy. That might make more sense than bull burials.

8 Alignment With The North Pole 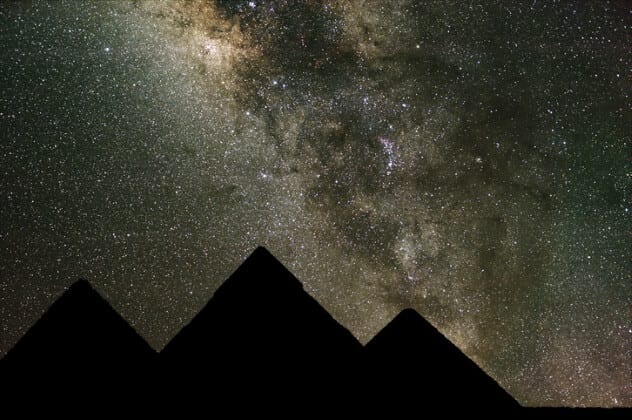 There are a lot of theories that circulate concerning the alignment of the pyramids, specifically the Great Pyramid. They all agree that they cannot conclusively say how the ancient Egyptians were able to construct the Great Pyramid with such accuracy to the cardinal directions.

The north-south axis is aligned to within 0.15 degrees of true north-south.[4] The ancient Egyptians didn’t have the North Star like we do today as a guide to true north. One of the only ways for them to have constructed the pyramids with such accuracy would have been to use complex algorithms. These algorithms would have only worked close to the seasonal solstice times, when the Sun’s alignment is more easily viewed. Further complicating the process, we must take into consideration atmospheric conditions, obstruction of viewpoint, etc.

Historically, no records have been found of the process the Egyptians used. The Great Pyramid, constructed thousands of years ago, is more accurate in alignment than our modern-built Meridian Building at the Greenwich Observatory in London. 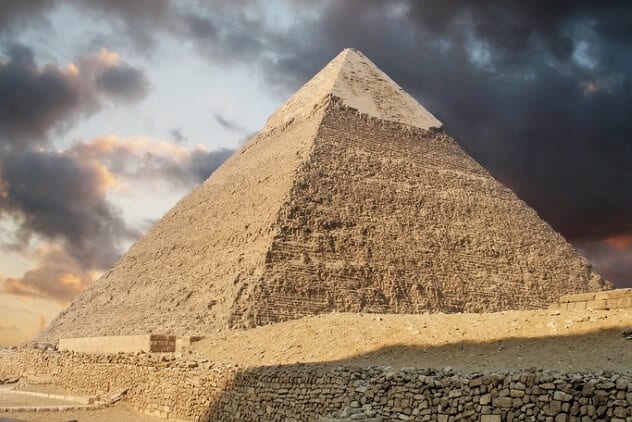 Samples of the mortar used for the construction of the pyramids have been analyzed many times, and though the composition has been determined, our modern technology has yet to be able to recreate it.[5] The mortar is mostly made of processed gypsum, and it wasn’t used like the cement we use for our modern-day bricks.

Ancient Egyptian mortar was used to support the joints of the huge stones as they were placed. An estimated 500,000 tons of mortar were used during the construction of the Great Pyramid. Astoundingly, this gypsum mortar is stronger than the stones themselves and has remained in place for thousands of years. 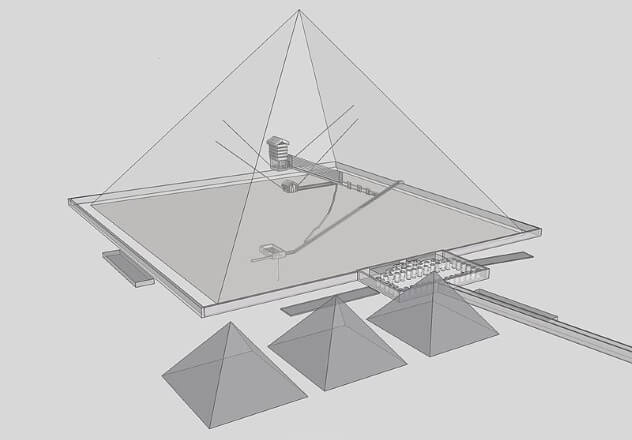 There has been much speculation regarding the shafts inside the Great Pyramid.[6] Of the three pyramids in Giza, it is the only one to be built with them. The angles of these shafts seem to correspond with celestial bodies. This would still beg the question: What unknown technology were they using to get such precise alignments, and why go through all the trouble?

Just like the pyramid’s alignment with the poles, there are no records found within Egyptian culture that reveal how they were able to get these alignments. There are other theories that state these shafts were simply for ventilation, though most of them do not even break the surface of the pyramid to reach outside air. 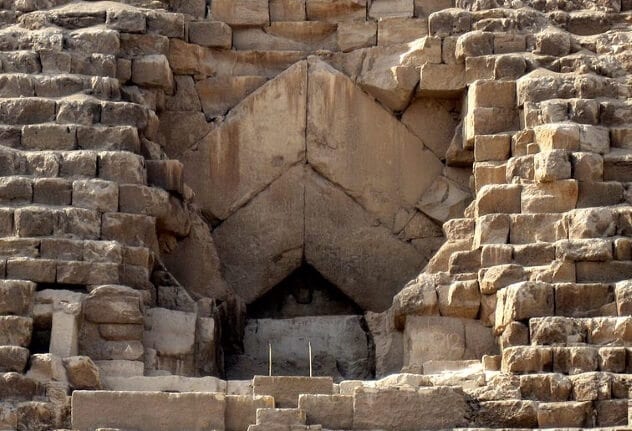 At one time, some pyramids had huge swivel doors. These massive doors were undetectable because they fit so perfectly into the openings within the pyramids. Such a swivel door was discovered when the Great Pyramid was first being explored.[7]

One could open the door from the inside with minimal force, due to how perfectly balanced it was. We are talking about an estimated 20 tons being moved with ease by a single hand. How the Egyptians were able to cut and place these doors with such precision remains a mystery. How were they able to balance such enormous weight? 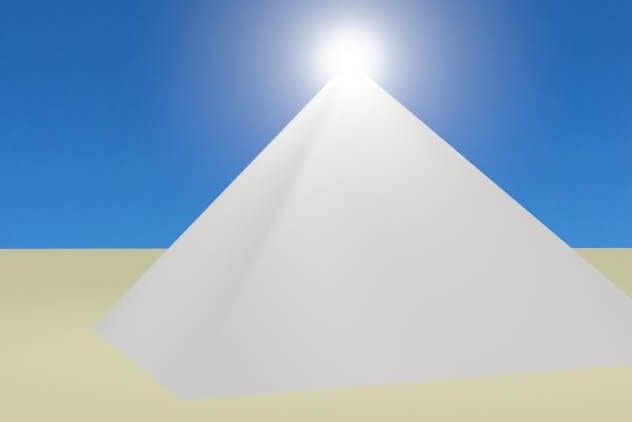 The Great Pyramid was once covered in white, polished limestone, referred to as casing stones.[8] This would have made the pyramid shine like a gem in the middle of the desert. The stones reflected the light of the Sun like a mirror. The cuts made in this reflective stone were angled perfectly, so when the Great Pyramid was covered in them, it had a smooth, flat appearance. A great number of these stones were cut from a quarry across the Nile River and then transported across the water. After crossing the river, the stones were placed with an exactness that is difficult to parallel.

A large earthquake in AD 1303 caused many of the casing stones to loosen. They were then used to build mosques and fortresses. Today, all that remains is the inner core of the pyramid. What a sight the Great Pyramid must have been intact, in its day. 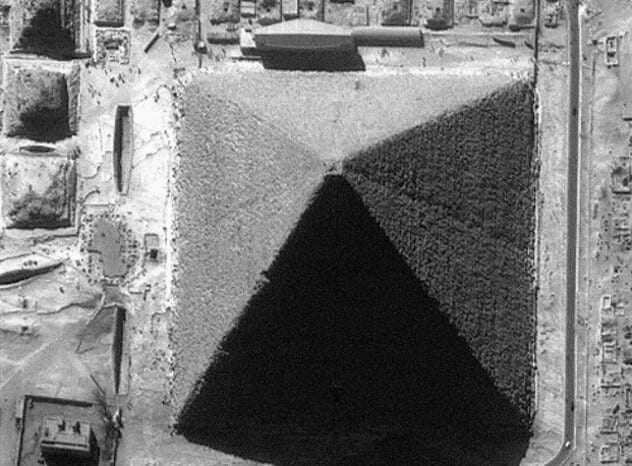 At first glance, the Great Pyramid of Giza looks like a four-sided pyramid. But from the air, you can see that each side indents, making it an eight-sided structure.[9] It is thought that perhaps these indentations were part of the design in order to keep the casing stones in place. Others have tried to claim that they’re the result of erosion.

Whatever the reason, the precision is amazing. The sides indent by one degree of a half-degree. Even in today’s world, that would be hard to facilitate. To deny the intent behind these indentations and credit the wind with their existence completely undermines the skill it took to make them. 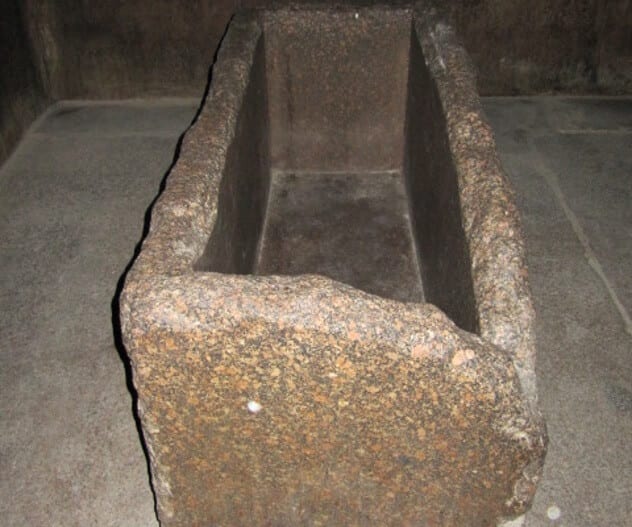 It is said that Khufu had the Great Pyramid built, though one wonders. When his sarcophagus was found and analyzed, it raised many questions. It was massive, weighing in at an estimated 3.75 tons, and its dimensions make it too large to have been brought into the chamber.[10] Therefore, it must have been placed while the pyramid was being constructed.

The sarcophagus was made from a solid piece of granite, hollowed out from within. It also features holes that appear to have been made with some form of a drill. There is much to question concerning how such a primitive time could produce such things. The effort it would have taken to hollow out and penetrate this granite raises eyebrows as to how on Earth it was accomplished. Can you imagine a wooden pickax being all you had to work with? 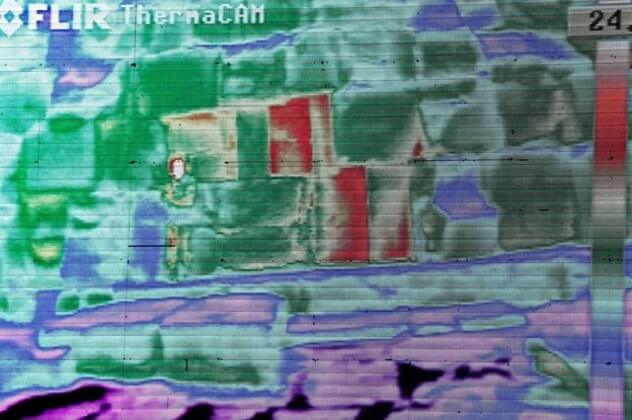 In 2015, a thermal scan of the pyramids revealed that the Great Pyramid has three areas along the bottom that generate some form of heat.[11] Speculation as to what could be the cause for these stunning anomalies began quickly. Some say there are small passageways beneath these heat points, which could lead to hidden chambers. Others believe that the heat is being generated by leftover ancient technology that has long been forgotten. There is sure to be more investigation of this discovery, as more heat spots have also been found along the upper half of the Great Pyramid.

Maybe the Great Pyramid of Giza is actually an ancient alien ship, preparing for takeoff after thousands of years at rest, absorbing the Sun’s energy. The heat spots are the engines starting to activate. It’s a possibility, right?

Nicole Shay is a freelance writer who loves all things ancient history.

Read more on the endless effort to learn more about ancient Egypt on Top 10 Dazzling New Discoveries From Ancient Egypt and 10 Archaeological Finds That Shed New Light On Ancient Egypt.