Advertisements are the scourge of the modern world. They have become more clever and intrusive as people become more aware of their presence. Ads on the Internet can follow us between websites and address us by name.

They are not a modern invention, though. Whether there were dollars, dinars, or denarii jangling in your pocket, there was always someone encouraging you to spend them through the use of an advertisement. 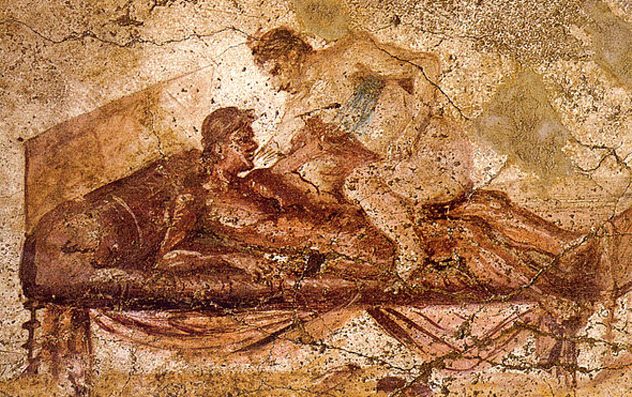 Don’t you hate it in fast-food restaurants when people get to the front of the line and still haven’t decided what they’re having? Well, the owners of the brothels in the Roman city of Pompeii clearly faced a similar problem.

They erected paintings of people in various states of sexual congress so that customers could decide what they wanted from the many services that were offered.[1] Romans were a lot less judgmental than most modern societies when it came to sex. Brothels were not hidden away but were able to advertise their wares publicly.

For example, the Lupanare (“Wolf’s Den”) was a purpose-built brothel in Pompeii that contained 10 rooms for guests to use. Its wall paintings served as ads for its various sexual services.

As well as in the large establishments, sex could be bought on the streets. Graffiti left all over the city directs people where to find the best prostitutes and brothels. “If anyone sits here, let him read this first of all: if anyone wants a screw, he should look for Attice; she costs 4 sestertii,” reads one.

Another gives more accurate directions to follow. “At Nuceria, look for Novellia Primigenia near the Roman gate in the prostitutes’ district.” 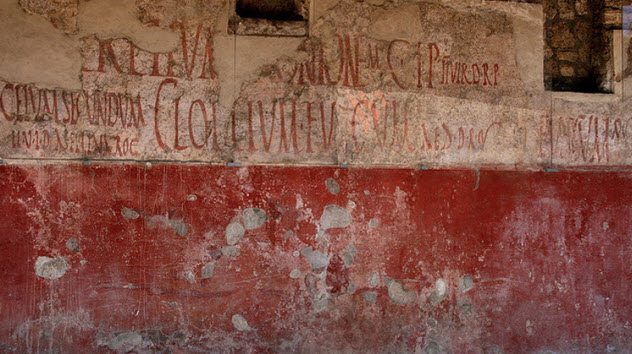 Prostitution is called the world’s oldest profession. But another profession has many similarities: politics. A politician must sell himself to the public just as assiduously as any brothel dweller, and in Pompeii, they turned to many of the same tactics. The local positions of aedile and duoviri were clearly sought after because election notices are painted all over the walls of Pompeii.

“Neighbors beg you to elect Lucius Statius Receptus duumvir with judicial power, a worthy man. Aemilius Celer wrote this, a neighbor. You jealous one who destroys this, may you fall ill.”[2]

Written in large, black, capital letters, the advertisement is hard to miss. The general formula for these ads was to state that some person supports a certain candidate and you should, too.

In one ad, a group of prostitutes urges the public to vote a certain way. Was this a genuine ad or an act of negative campaigning? “All the deadbeats and Macerius ask for Vatia as aedile” seems to be a clear attack ad. 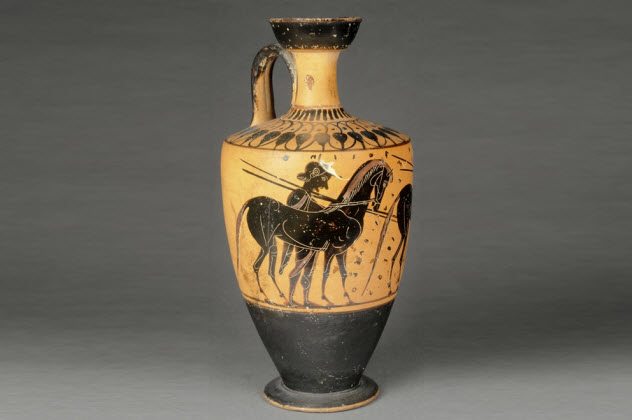 Classical Greek pottery is often heavily decorated in red or black figures. The stylized movements of the characters make them seem to come alive as the pot is turned.

Many pots are signed by the artists, their names no doubt helping to sell these wares to collectors just as a signed Monet would be snapped up today. Signatures are their own type of advertising.

One bitter potter, Euthymides, even took the time to advertise how much better his work was than one of his rivals. He wrote “better than Euphronios could ever have done” on one of his vases.[3] Sometimes, however, artistic skill was not sufficient to guarantee a sale.

In the Louvre, there is a jug showing two men leading horses. It is a pleasant scene, and no doubt, someone would have wanted it in his home. Perhaps not, though, as it has some added text between the figures. In what the Louvre considers one of the first advertising slogans, the potter has written: “Buy me, you will be getting a bargain.” 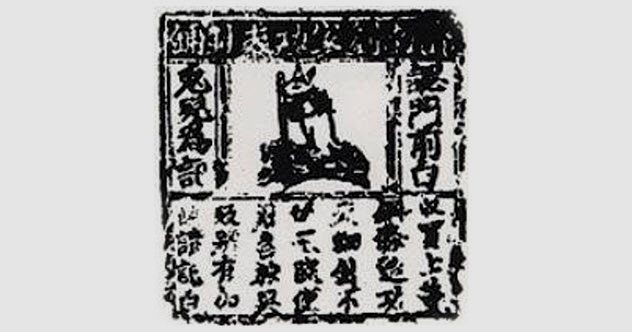 Printing changed the world and especially the world of advertising. Leaflets and posters became a practical way for a company to spread the good news about their products. When did printing become a tool of marketing? A thousand years ago in China, one company seems to have been an early adopter.

Jinan Liu made good needles, and he wanted you to know about them. “We buy high quality steel rods and make fine quality needles, to be ready for use at home in no time,” runs the text of the ad.[4]

As advertising copy goes, it may not be the best. But the advertisement does show another innovation. Above the writing, there is the image of a rabbit holding a needle. Here we see the earliest mascot for a brand.

A copper plate was engraved with the ad so that many paper copies could be churned out and passed on to potential customers. Blame Jinan Liu the next time a printed leaflet is left under your car’s windshield wiper. 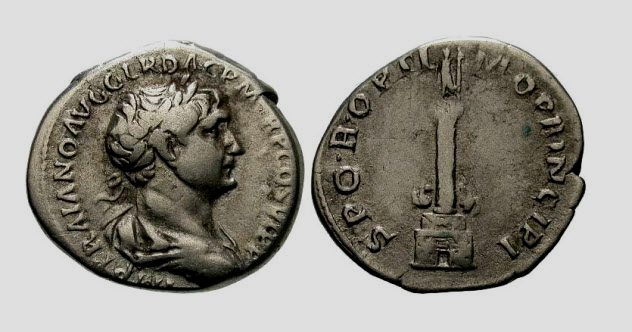 The perfect advertisement is one that is omnipresent and inserts its message into the customer’s mind, almost without him realizing it. One method is to place the ad on an object that is used every day.

Coins have long been a tool of propaganda and still are today. British coins have “ELIZABETH II D G REG F D” stamped on them, meaning “Elizabeth II, Dei gratia regina fidei defensor” or “Elizabeth II, by the grace of God, Queen, Defender of the Faith.” Ancient coiners were also keen on advertising the importance of the person whose head was shown.

Julius Caesar put his face on Roman coins and used them to proclaim his descent from the goddess Venus. His assassin, Brutus, also used coins as propaganda. Brutus included two daggers on the reverse to show just how he had gotten there and to tell the people they had him to thank for the end of tyranny.[5]

Brutus was defeated, and Caesar was declared a god. Of course, more emperors followed and each of them was keen to use coinage to brand themselves. Augustus, the adopted son of Caesar, had written on his coins that he was the son of a god, which was technically true.

Other emperors preferred to show their military prowess. Trajan decorated the reverse of his coins with images of his triumph over the Dacians. At a time when literacy was far from guaranteed, one picture on a coin could be worth far more than a thousand written words. 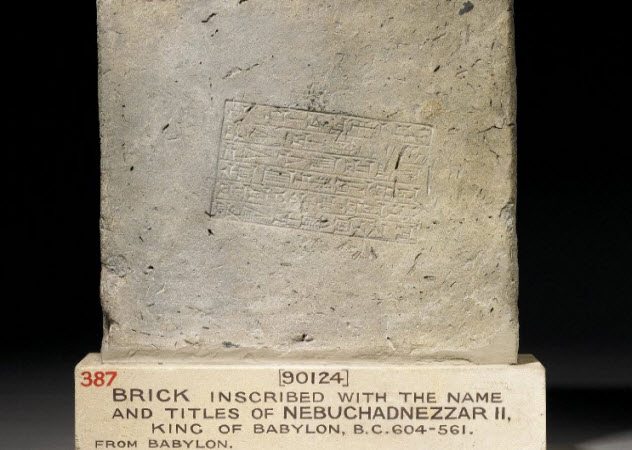 Mesopotamia, the land between the Euphrates and Tigris rivers in modern Iraq, was home to one of the earliest civilizations. Almost every building was made from mud bricks, not stone. These bricks offered a powerful opportunity for advertising.

Over 4,000 years ago, the bricks used in construction had messages impressed in them in cuneiform writing. These messages usually bore the name of the king who had commanded the building. When you pass a wall covered with the king’s name, you tend to remember him.

When King Nebuchadnezzar turned Babylon from a market town into the capital of an empire, he made sure that people knew he was responsible for the change by building Babylon with his own branded bricks.

“Nebuchadnezzar, king of Babylon, who provides for Esagila and Ezida, the eldest son of Nabopolassar, king of Babylon, am I” was written on each one. However, these bricks only advertised to the builders involved. Once they were in place, the inscriptions were hidden from sight.[6]

When Saddam Hussein rebuilt the ruins of Babylon, he went one better than Nebuchadnezzar. On the bricks used in the reconstruction, he had written, “Saddam Hussein, the protector of Iraq, rebuilt civilization and rebuilt Babylon.”

This time, the writing was visible to all. After Saddam’s fall, all the bricks were removed. 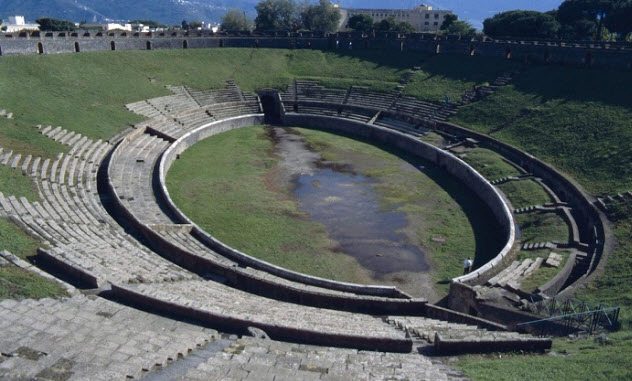 Big sports are big money. Thousands, even millions, of eyes will be turned to the event. Any advertisement placed there is sure to get noticed. You might even sponsor the whole game and have your name on everyone’s lips.

But sponsorship of games is not a modern invention. We must turn to the bloody gladiatorial bouts of the Romans for the early use of sport as advertising and propaganda.

Pompeii was home to a large amphitheater where gladiator shows were often performed. We even know that the games got out of hand sometimes, such as when a series of taunts turned into a riot and the games were banned. Once the Senate allowed them to be held again, the games were used for political ends. Painted advertisements on walls announced who was paying for the games.

“20 pairs of gladiators of Gnaeus Alleius Nigidius Maius . . . will fight without any public expense at Pompeii.”

When the time came to vote, it was hoped that the ads would remind people who had given the best entertainment. 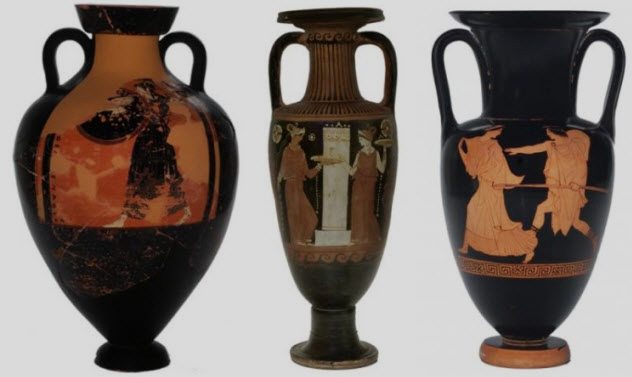 Amphorae were large pottery vessels that were used to transport and store goods in the Greek and Roman worlds. An amphora often had a stamp placed on it to let the purchaser know the exact origin of the product inside. Some may have been purely for management of stock (knowing what you had in store), but many stamps were a form of advertising.

Olive oil was one of the most important products of the ancient world. It was used in food, as fuel in lamps, in medicine, and to clean the body. Like those who hunt out extra virgin olive oil, people would seek out the best quality oils.

Many amphorae from Baetica in Spain that contained olive oil have been found with stamps showing the origin of the oil. Perhaps its oil was in demand and having that stamp of origin helped sales. On the other hand, amphorae of olive oil from North Africa are rarely marked, which may suggest that there was no benefit in advertising the origin of that oil. 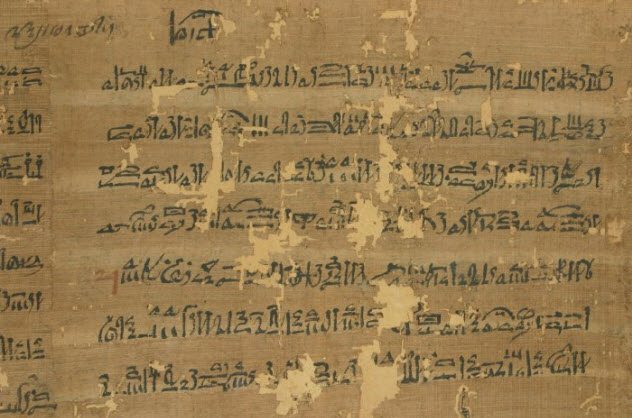 When a dog or cat goes missing, we often see posters advertising the fact and calling for the animal’s return. In the ancient world, slaves had much the same position as pets to their owners. The slavemaster wanted his property back, so he would advertise his loss. Messages were painted on walls with descriptions of the fugitive slave and details of the reward for the finder.

The painted message on a wall is familiar from Pompeii. But in other ancient places, there were different ways to spread the news of a runaway slave. In Egypt, pieces of papyrus have been found with ads for lost slaves. One promises a reward to whomever brings the fugitive slave back to the army barracks.[9]

Unlike a lost pet, however, a returned slave could not expect to be received with love. Captured slaves faced any of a number of punishments for their dereliction. 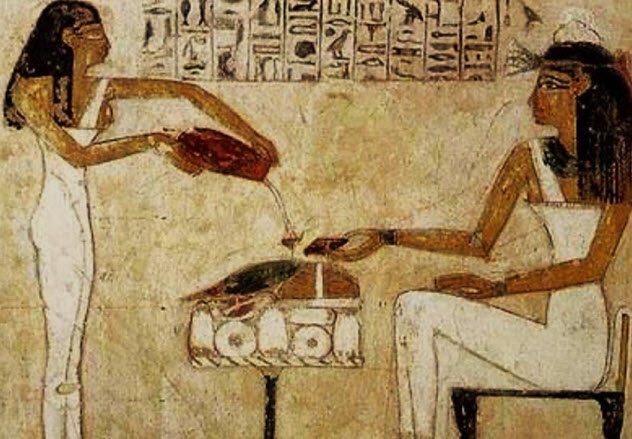 People like to get drunk, so advertising alcohol should be an easy thing. It has been claimed that humans gave up their hunter-gatherer ways expressly to be able to brew alcohol. Supposedly, the oldest advertisement in the world is for a Mesopotamian beer.

Alan D. Eames, who described himself as a beer anthropologist, found a tablet with the image of an ample-breasted woman holding jugs of the ale. Next to the image, Eames believed the writing said, “Drink Elba, the beer with the heart of a lion.” Unfortunately, no photographic evidence of this find was ever produced.

However, not all advertising is conveyed through pictures or text. Word of mouth is perhaps the oldest form of advertising. In those terms, Falernian wine had one of the best campaigns.

Poets wrote about the joys of this wine. According to Martial, it was a drink fit to be poured for Zeus himself. It developed a myth around its creation and was supposedly a divine gift from the god Bacchus. One particular vintage from 121 BC became so acclaimed that its price reached absurd levels.[10]

If you want to sell something, it seems that tastemakers have always been a good investment.

Read more about amazing vintage ads on 10 Vintage Ads That Will Destroy Your Self-Esteem and Top 10 Unbelievable Vintage Cigarette Posters.