It’s no secret that advertisers sell their products by offering a solution to a consumer’s problem—and in some cases, a problem they didn’t even know they had.

For example, people didn’t worry about bad breath until Listerine created mouthwash. Yet, the Listerine-induced halitosis scare resulted in one of the most successful ad campaigns in history. And Listerine is still being sold today—with even more flavors and special additions to its original line of mouthwash.

Companies like Listerine profited off of instilling fear in their consumers. And as indicated by many early 20th-century ads, these companies had no problem ripping consumers’ self-esteem to shreds to make a buck—and in some cases, endangering their lives by giving them less-than-sound medical and hygiene advice.

Advertisers were able to produce these horrifying ads due to lack of regulations, but also because in many cases, they didn’t have evidence to prove that what they were promoting was actually bad. Case in point—a 7-UP ad, which suggests giving babies sugary sodas before their teeth come in.

While many of the companies featured in the following ads are still thriving today, they are selling their products with slightly different messaging. Maybe people were tougher back in the day—or advertisers were just plain meaner. In these ten horrifying advertising messages, you decide.

10If You Smell, You Won’t Have Any Friends 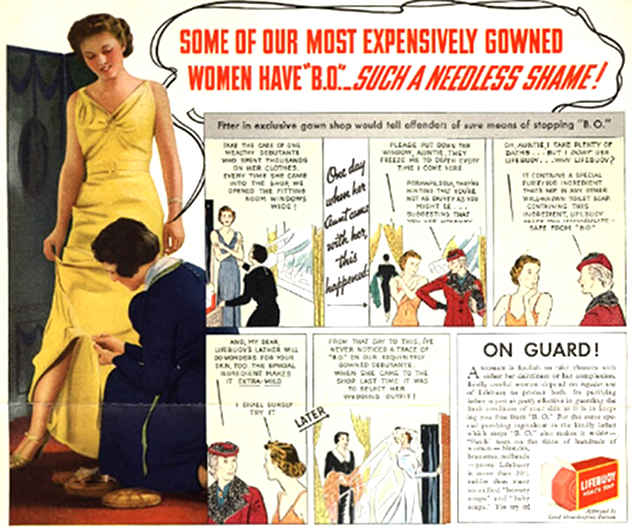 Body odor, affectionately known as “B.0.,” is often viewed as a taboo subject. It is something you whisper about in the bathroom, and if you choose to confront offenders in your school or office, chances are you will do so by dropping hints, deodorant, or cologne samples in their path. However, companies did not have a problem calling out people with B.O., especially those who wore fancy clothes (because apparently those kinds of people were not supposed to sweat).

It is especially troublesome if you were a woman who showed up to an event and noticed all of the windows were open (that means they are trying to air out the room because of your stench). So while today’s ads protect our egos by selling deodorant based on whether or not it leaves white marks or smells like a field of flowers—remember, the next time you’re at a party and feel socially isolated, it is probably because you stink.[1]

9Smoke Gets in Your Eyes 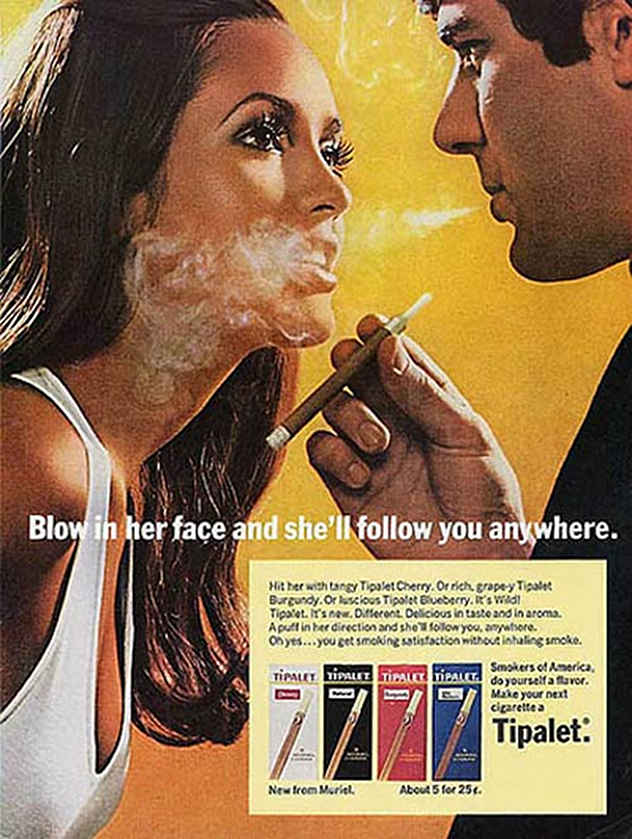 If you can’t get lucky, it is likely because your hands are disgusting, or you are not smoking the right cigarettes. Greasy hands threaten romance, according to vintage Lava soap ads.[2] While cleanliness on a first or last date seems kind of like common sense, it is not surprising advertisers needed to play Captain Obvious with this one. Companies were already calling out people for B.O., so they might as well call out folks with dirty fingers. Whether you have been in the bathroom, taking out the garbage, or changing the oil in your car, you really need to wash your hands before spending quality time with your significant other.

And if your greasy fingers are not the problem, perhaps it is because you are buying the wrong cigarettes. The pictured Tipalet ad suggests that all it takes for men on the prowl to catch a lady is to “blow smoke in their face,” which is definitely something today’s women do not enjoy.

8It’s Not You, It’s Your Face Cream 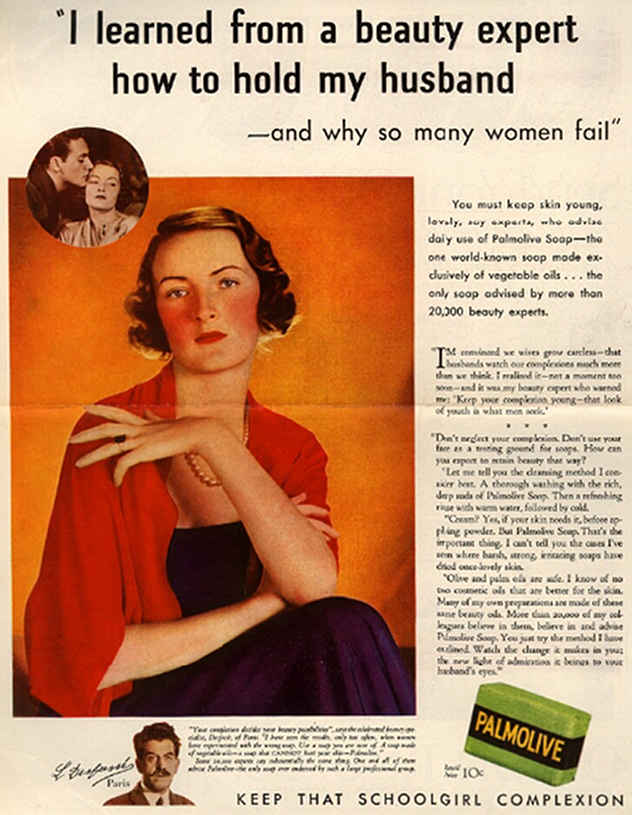 If you’re single, it is because you have the wrong face cream. In the mid-20th century, unmarried women were generally viewed as having something wrong with them (this still sort of applies today, but in less obvious ways). Regardless, these independent/spinster women weren not shunned because of their personality or lack of interest in the opposite sex—it was because they weren’t using the right beauty products. According to one vintage ad, if you use the right complexion creams, you can snag a husband in no time—even if you’re not looking for one.

And once you’ve got a husband, you will need to keep him with the right soap.[3] According to the pictured ad, once these spinsters landed a man, they had to work to keep him by relying on the expert advice of their beauty consultant, instead of their mothers or anyone else they knew who was married. In fact, by using soap, these ladies’ husbands would be so mesmerized they would come home straight after work. Heck, maybe they would stop leaving the house altogether.

7Middle-Aged and Gray? Your Husband Will Run Away 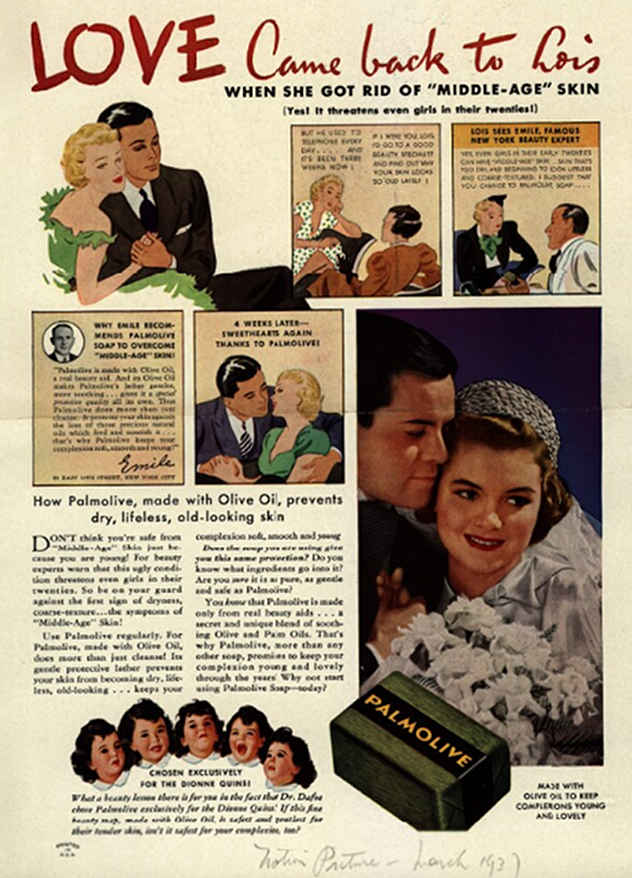 If you’ve been dumped, it is most likely because you look middle-aged or have gray hair. Getting dumped sucks—and this was no exception in the early 20th century. But chances are, most women back then were dumped because they looked middle-aged, which was defined as having wrinkly, old skin (and back then, these women were probably no older than 30). Also, women were told that having gray hair was “risky” and implied they had better be ready for the rustling of divorce papers if they failed to color their hair. However, there is a silver lining—ladies who figured this out and started using the right products, such as ones to get their skin back in “schoolgirl” shape, were lucky in love once again. Just look at Lois, pictured above.

And if all else fails, the next best way to a man’s heart is through his stomach. This does not have anything to do with hygiene, but it is worthy to note that women can please their men if they buy the right kind of bread. While it contradicts all of the ads that claim keeping your husband relies on soap and hiding your gray hair, one Butter-Nut bread ad does recognize that “some men are different.”[4] 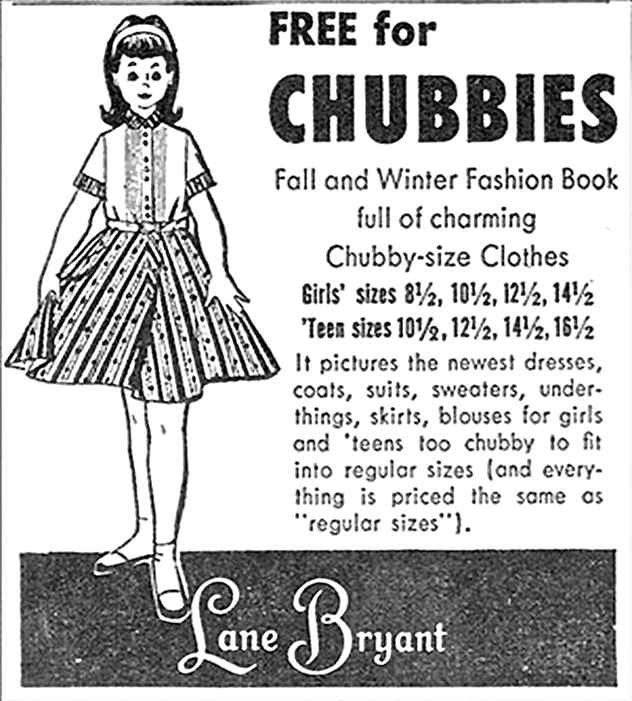 If you’re chubby, don’t worry—you can buy clothes at the Chubby Shop. In the mid-20th century, clothing stores did not exactly hide their disdain for people who didn’t fit into traditional sizes because they made it much harder for those people to shop. Clothes for people who were larger than your average twig were forced to shop in the “husky” section, and if you have ever picked up a vintage Montgomery Ward catalog, you would have noticed that those husky sizes usually cost more than the standard sizes. For ladies, there is no sugarcoating in this vintage Lane Bryant ad: If you’re looking for clothes, just check out the Chubby Shop. (Hey—they have back to school specials!)[5] 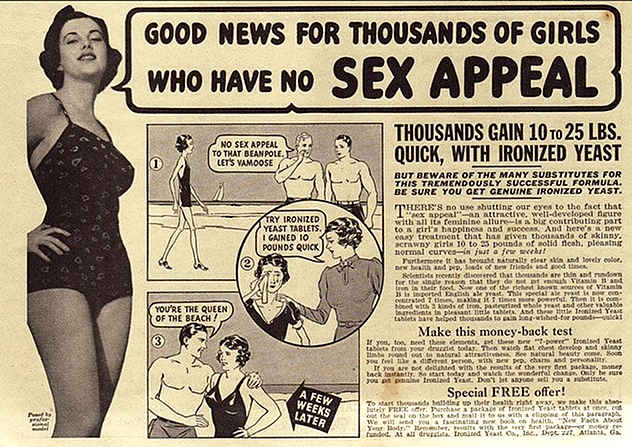 Before the Chubby Shop, skinny wasn’t in style. Women who lacked full figures could purchase “blow up bras” to make them look more endowed, for example. If blow-up body parts were not appealing, you could work on gaining real weight. Many ads from the 1930s suggest that ironized yeast can prevent you from looking too thin and haggard—especially when you do not want your photo taken. And once you have consumed enough yeast, you will pack on a few pounds, have tireless energy, a youthful glow, regular bowel movements, and plenty of sex appeal.[6] It is even recommended by the League of Nations. Today, ironized yeast is often given as a B-vitamin supplement, but the University of Maryland suggests that there is not any evidence to support a link to weight gain. 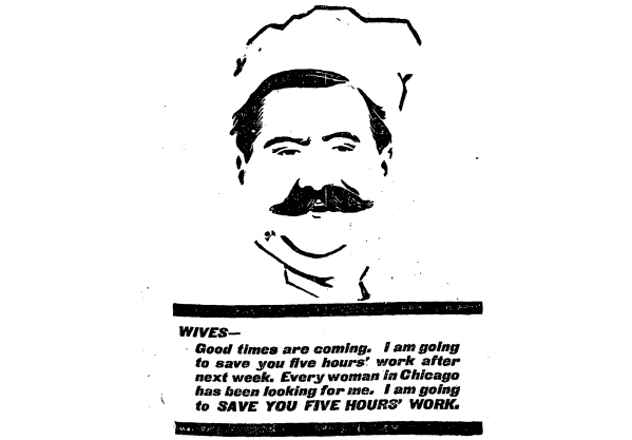 Ladies, men with mustaches can save you five hours’ worth of work! There is not a whole lot out there to confirm this, but apparently, there were mustached men in the Chicago area looking for overworked women. While this ad is nothing short of bizarre, and no fees are listed, perhaps Mr. Mustache can pick up the complexion creams, soaps, and other personal hygiene items you need. If he is not a serial killer, that is.[7] 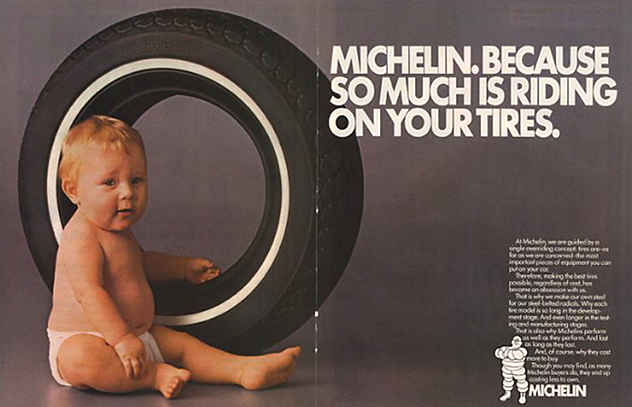 If you don’t use Michelin tires, it is likely you or your family will be killed in a fatal car accident. Not only did advertisers prey on consumers’ fear of poor hygiene, but they also had no trouble suggesting that you are putting your loved ones in danger if you buy the wrong tires. As the old adage says, “Puppies, babies, and sex always sells,” and this Michelin tire ad featuring a diapered baby tries to scare us into buying the right tire to keep our children safe.[8] 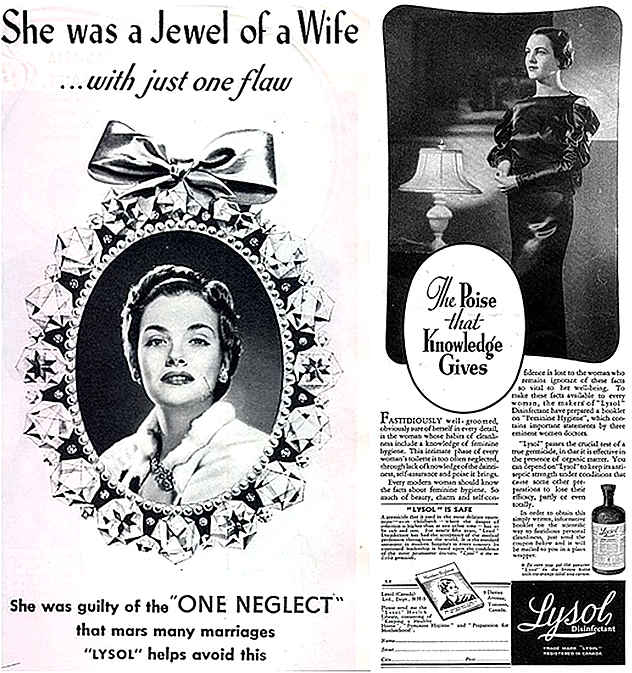 Dangerous advertisements once hinted to women that household cleaning products could be used as a form of birth control. When Lysol began running its ad campaign encouraging women to use their product for feminine hygiene, it was not because the company wanted women to smell nice “down there.” It was because there was no form of birth control available at that time, and apparently, Lysol Disinfectant, a “concentrated germ-killer,” was the next best option.

The ad campaign, which noted that the product “can cleanse the vaginal canal . . . even in the presence of mucus matter,” helped Lysol become the most popular form of birth control during the Depression.[9] But it also led to almost 200 Lysol poisonings and five deaths. Using Lysol as a douche damaged women’s body parts, and it did not work as a birth control method either. 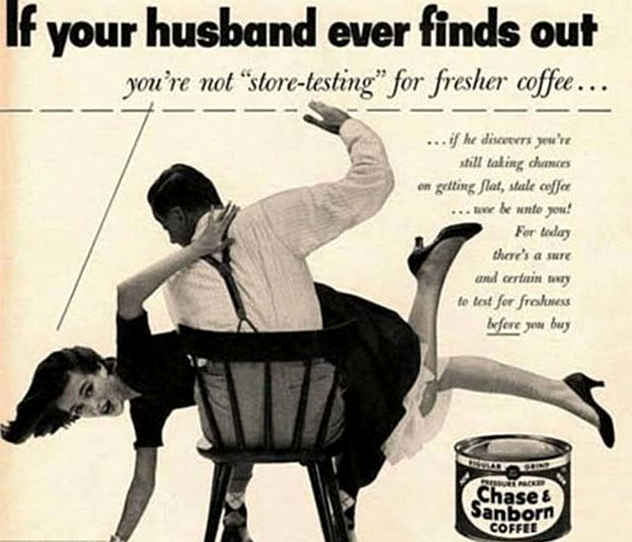 If you’re a woman, all you are good for is cooking and cleaning—even if you’re not any good at it. The woman’s role as a house cleaner and husband-pleaser was made quite clear in vintage ads, especially those from the early to mid-20th century. In order to have a happy life, men were encouraged to buy their wives household products and kitchen appliances. A 1960s ad from Kenwood shows a happily married couple with a new appliance, the “Chef,” which can do everything but cook—because that’s what the wife is for.

Companies such as Hoover suggested that men could make their wives’ Christmas complete with the purchase of a new vacuum. And the harder a wife works, the better she looks, according to one Kellogg’s ad, which suggests that a woman has more stamina despite spending hours on her hands and knees, because she got her daily vitamins from cereal. Despite the fact advertisers depicted women as the cooks and cleaners of the household, they did not have trouble calling out the women who struggled to perfect a home-cooked meal. One Schlitz ad pokes fun of an “incompetent” wife, in tears because she cooked an inedible dinner, but she is comforted by her husband because she didn’t burn the beer.[10] To further berate those “incompetent” ladies, advertisers suggested that women could be spanked for picking out the wrong kind of coffee, as portrayed in the pictured Chase and Sanborn ad.

Tiffany is a trained journalist and freelance writer who uses her investigative and writing skills to produce marketing copy for higher education. She has a master’s degree from the University of Wisconsin. Her hobbies include reading about true crime and figure skating. Visit her website to read more of her work.

Read more about false advertising on 10 Advertising Lies We’ve All Been Fed and 10 False Advertising Promises That Cost Companies Millions.