Animals have spent hundreds of millions of years evolving, so they’ve had plenty of time to come up with some pretty amazing designs. From hilarious results such as the duck-billed platypus and the blobfish to the majestic likes of lions and elephants, nature has proven that it can produce pretty much anything.

But perhaps most amazing are the animals we don’t see. Some animals have evolved so acutely with their environment that they continue to evade scientific observation to this day. Below are just ten such examples of animals with amazing camouflage. 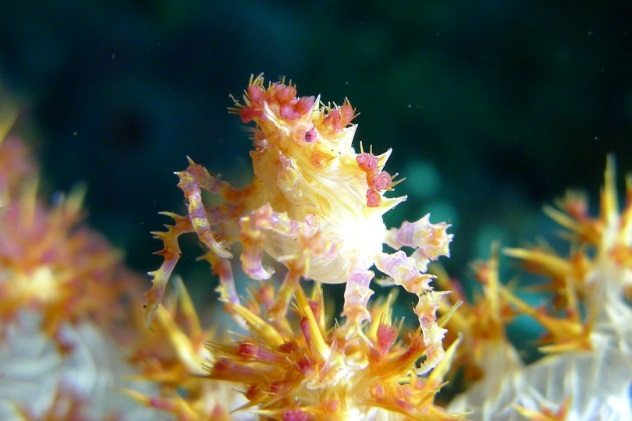 Hoplophrys oatesii is a species of crab found in the waters surrounding Indonesia. Growing to a whopping 1.5 to 2 centimeters (0.6–0.8 in), these crabs spend almost all of their life living in soft coral, giving them their common name, the soft coral crab.

The coral they live in, Dendronephthya, is very bushy and fluffy, which has led to the nickname “cotton candy corals.” The crabs survive by feeding on plankton that gets caught in the coral, giving them few reasons to ever leave. Their shells are covered in tiny spindles that look like the branches of the coral. But the crabs take things a step further by plucking off bits of the coral and attaching it to the spikes on their shells, giving them their other name, candy crabs.[1]

While most insects aren’t considered the most beautiful of creatures at the best of times, the lichen katydid looks like someone was asked to design a Satanic demon bug. Hiding away in the treetops, this animal has used its camouflage to avoid scientific observation until recently, so there’s not a lot we know about them just yet, other than they have been spotted in Australia as well as Central and South America.[2]

Although all camouflages work by using a combination of shapes and colors, the lichen katydid takes this to a whole new level. The spines protruding from its body combine with brightly colored lines on their mostly dark bodies to produce an effect that makes the insect look hollow. To look at it, you might think it was a piece of art made with wire, rather than a real, living insect.

Uropyia meticulodina is a species of moth that can be found in both China and Taiwan. While flying, U. meticulodina looks just like any other idiot moth smashing its head repeatedly against a light. But when it lands, it looks like something completely different.

Much like its distant cousin, the dead leaf butterfly, the dead leaf moth does exactly what it says on the tin: It looks like a dead leaf. But as spectacular as both of these creatures are, the butterfly has one fatal flaw that the moth has overcome. Butterfly wings rest vertically, meaning that it doesn’t just look like a dead leaf; it looks like one that is perfectly balanced on its side. The dead leaf moth, however, gives a more convincing performance. Their wings not only look like dead leaves; they appear to be ones that have curled up.[3] The veins in their wings line up perfectly with their patterns, creating an incredibly realistic 3-D effect, complete with shadows. 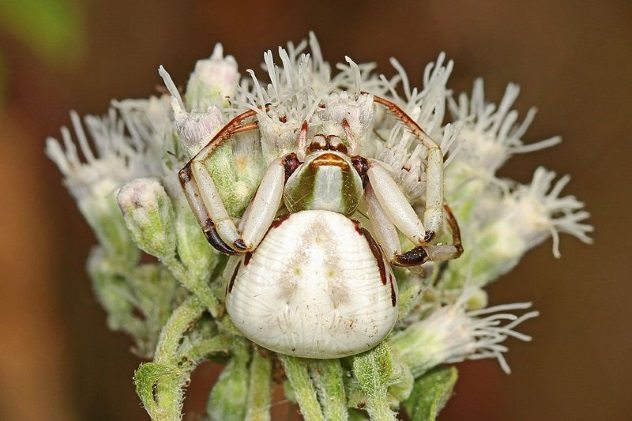 Misumenoides formosipes, commonly known as the whitebanded crab spider, is found across the United States and Canada. It was considered a pretty unremarkable spider up until recently, when it was discovered that not only does this spider have camouflage; it has active camouflage.[4]

Rather than using a web to trap prey, this spider sits atop flowers and pounces on anything that comes too close. Since the arachnids themselves are usually either white or yellow, they tend to stick with plants of those colors. But it was only in 2015 that scientists realized that female whitebanded crab spiders can swap back and forth between the colors by moving pigmented fluid through their bodies. The reason we hadn’t observed this before is that it’s the slowest camouflage ever. It takes between three and nine days for the spider’s color to completely change, so it’s easier for them to find a flower that matches their current color than to match whatever flower they find. 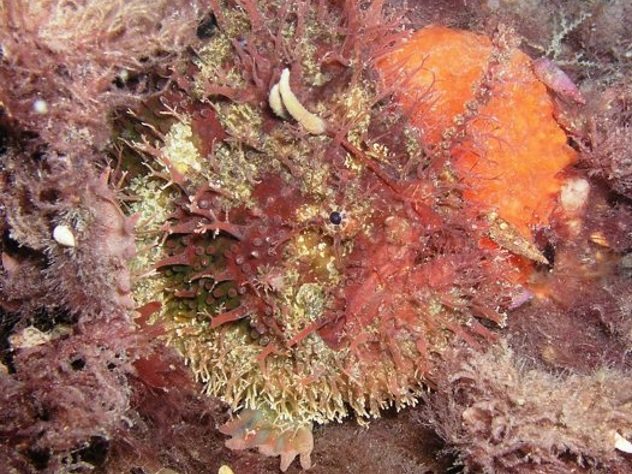 For that reason, they are better off resting on the rocks and letting the food come to them. Their only hope of catching prey, therefore, is to be invisible. They accomplish this in several different ways.[5] Firstly, they can manipulate their coloring to match their background. They are also covered in warts, which gives their skin a rougher, more rocklike appearance. Finally, they are covered in long spines and fleshy filaments that make them look like seaweed or coral. Unsuspecting prey can be attracted to the lure or simply searching for food among the seaweed before being inhaled by the anglerfish’s giant, gaping mouth. 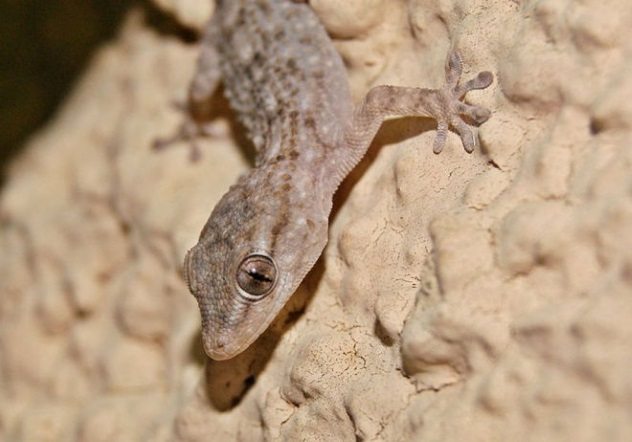 Chameleons are by far the most famous animal when it comes to camouflage. They change color by altering their lower layers of skin, which are lined with nanocrystals. Tensing the skin brings these closer together, while relaxing it brings them further apart, causing light to reflect in different ways and giving them their new color. But chameleons aren’t the only lizards that have mastered the art of camouflage.

The Moorish gecko is a common lizard that can be found in Europe, Africa, North America, and Asia, either in coastal areas or urban environments. Like the chameleon, it can change color to match its surroundings. But unlike the chameleon, or any other land animal for that matter, the Moorish gecko does this by using the same technique employed by octopuses and cuttlefish. Their skin is filled with proteins known as opsins, which react to light. In one experiment, the lizards were placed on a new color, which they then matched. They were then fitted with tiny lizard blindfolds and were still able to match the color. But when their skin was covered up and their eyes left uncovered, the geckos were unable to change color, making them unique among land-dwelling camouflagers.[6] 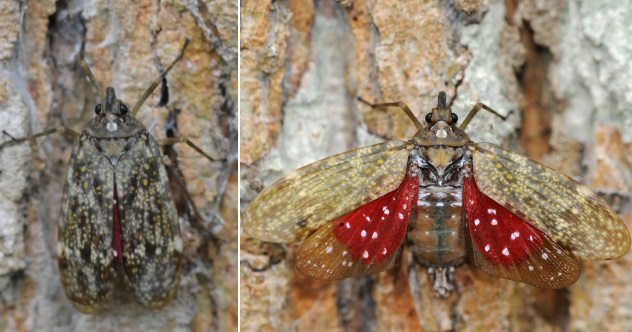 The lanternfly is a moth-like creature found worldwide. If you manage to spot some, you’ll be immediately drawn to their hilarious heads, which can be shaped like peanuts, alligators, saws, or anteater snouts.[7] But apart from the fact that their numbers are dwindling, you’re unlikely to see one anytime soon, as they can camouflage themselves.

The outer wings of the lanternfly pictured above are colored and shaped so that they blend in with the trees, from which they suck sap to survive. If the animal is threatened or frightened, it will open these wings to reveal the lower layer, which are patterned to look like the giant, glowing eyes of a predator. 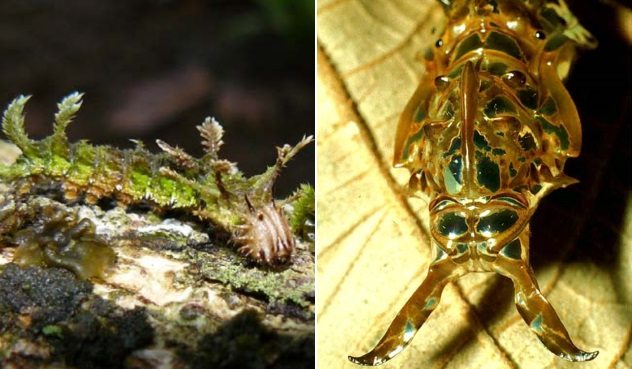 Before blossoming into a beautiful black and white butterfly, the young form of Adelpha serpa celerio is a nightmarish monstrosity.[8] As a caterpillar, this little creature is covered in fluffy little spikes that look remarkably like leaves. With its mostly green coloring, this makes the caterpillar resemble moss, keeping it safe from nearby predators.

But it doesn’t stop there. Before becoming a butterfly, it must make itself a chrysalis (cocoon). To keep the creature safe as it undergoes its transformation, the chrysalis is quite unlike those you would see from your everyday caterpillar. This cocoon is incredibly detailed, using a combination of green and metallic coloring to create the illusion of a beetle-like creature, complete with body segments, eyes, wings, and two enormous pincers. This threatening appearance serves to ward off hungry intruders until it can complete its transition into a relatively normal-looking butterfly. 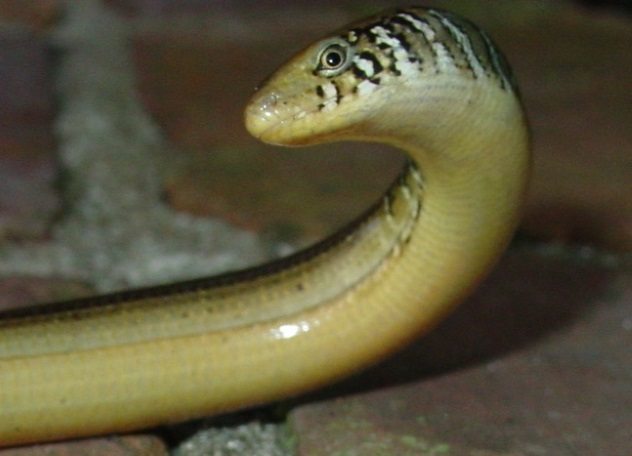 If there’s one thing we know about lizards, it’s that, unlike snakes, they have legs. Well, we were all wrong. Native to North America, the glass lizard looks exactly like a snake but is, in fact, nothing more than a long, legless lizard.[9] Fortunately, the animals aren’t considered dangerous to humans at all, but their striking resemblance to snakes no doubt serves to protect them from larger hunters. The name “glass lizard” was given since, like other lizards, it will shed its tail if picked up. Since the tail makes up half of its body, this can be quite a dramatic “shattering.”

There is a similar creature known as the Florida wormlizard, which, despite its name, is neither a worm nor a snake. In fact, it isn’t even technically a lizard but belongs to its own family, Amphisbaenidae. They have no eyes or earholes, are pink, and spend most of their lives living underground. But if one does surface, it will look like a giant, 28-centimeter (11 in) earthworm, which, though completely harmless, is pretty disgusting. 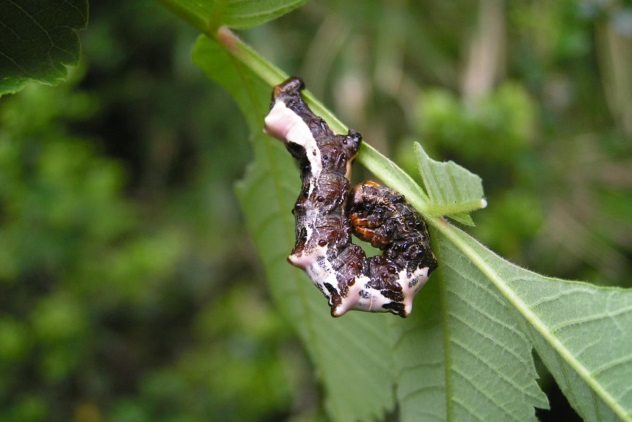 Presumably after some deliberation, Apochima juglansiaria decided that the best disguise it could assume was one which few animals would try to eat: bird poop.[10] Using simple black and white colors, this caterpillar will curl up to resemble avian droppings, protecting it from birds and other predators who just aren’t into that sort of thing. One experiment found that curling up made no difference in how often green caterpillars are preyed upon, but the black and white caterpillars were three times safer when curled. It’s an interesting choice of defense, but the results don’t lie.

Read about more amazing things animals can do on 10 Unbelievable Animal Abilities and 10 Hidden Abilities Discovered In Well-Studied Animals.