If there is one thing you can say about plants, it’s that they look interesting. They are beautiful, colorful, and intricate—from the tiniest bit of moss to the grandest tree in the jungle. They look even more interesting when they do what plants tend to eventually do and take over the land.

We humans think we are so smart. We sculpt and tame and add to the Earth and even the seabed. But the malls, streets, and skyscrapers that we build are just future plant holders. Here are ten places and times that the plants have taken over what we have made.

Most of the time, plants take over because humans have abandoned a particular space and stopped actively pushing the plants back. However, there is at least one time that the plants pushed first.

Wangaratta is a city in Northeast Victoria that exists mostly as a service center for the surrounding farmland. It is a well-established community where people clearly maintain boundaries against plant overgrowth, and you rarely hear of plants attacking the township.

However, one morning in 2016, residents of Wangaratta woke up to a town covered in a type of tumbleweed known as “hairy panic.” Houses were covered up to their roofs. Cars were completely hidden. The local council refused to help because they deemed that the tumbleweed was not a fire hazard. Struggling to clear out their properties and be tumbleweed-free, residents were not impressed.[1]

The “hairy panic” was blamed on one particular farmer who was not maintaining his land against the growth of the plant, even though weather conditions and lack of water made it difficult for all farmers to do so. No doubt it was a lonely arvo (afternoon) at the pub for him. 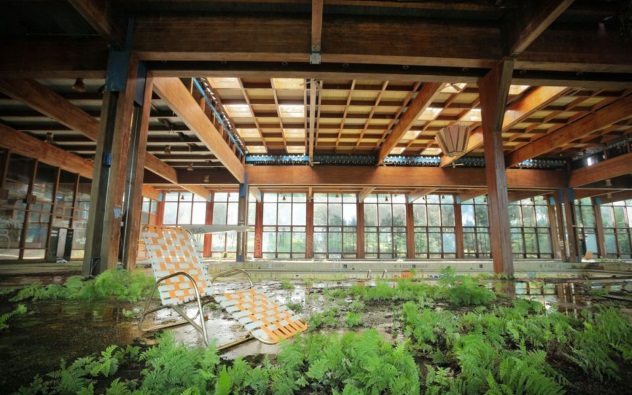 Kellerman’s, the resort visited by Baby and her family in the wonderful movie Dirty Dancing, was based on a real place called Grossinger’s Catskill Resort Hotel, near Liberty, New York.

In the middle of the 20th century, there were a number of these hotels in the Catskills, primarily catering to wealthy Jewish New Yorkers, who would (as seen in the movie) often stay for the summer (the men visiting on weekends) to escape the city heat. Cheaper airfares and air conditioning led to the demise of these woodland retreats, as more people stayed in the city or flew to more interesting destinations.

Grossinger’s was enormous and glamorous. It had ballrooms and swimming pools and a skating rink. It is still enormous, but now there are ferns, moss, and vines climbing the buildings. Trees are inching closer to the resort. The nature of the woods is reclaiming its own.[2] 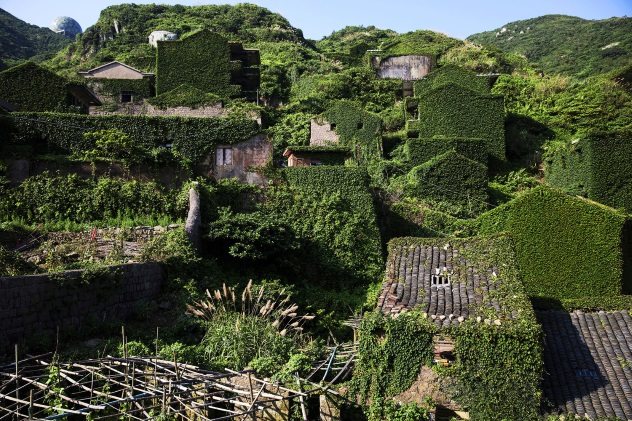 There are a number of places on this little blue planet where the beauty of overgrown plants is a tourist draw. One such location is the little fishing village of Houtouan, nestled into China’s Shengshan Island, one of the 400 tiny islands of the Shengsi archipelago. Houtouwan becomes greener by the day.

Tourists visit to see the eerie beauty of the overgrown village, which now only has a few residents. Houtouwan used to be a bustling, if remote, fishing community, but in the 1990s, it was largely abandoned by its inhabitants, who no longer wanted to live in such a remote and underserviced area.

Xu Yueding and his wife Tang Yaxue used to be residents of Houtouan and now return daily to sell bottled water to the visiting tourists. There is nothing else to buy in the village, and there is no electricity or running water.[3] 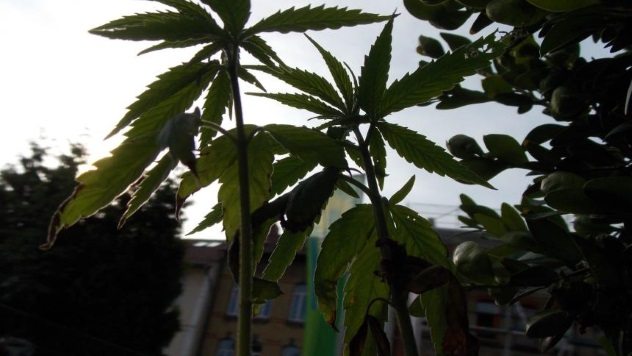 Gottingen, Germany, is a very attractive university city which got a bit of media attention in 2013 for a hostile plant takeover that was aided by humans.

Much to the surprise of many residents, peaceful Gottingen stepped to the forefront of political activism when a group of pro-marijuana activists called “A Few Autonomous Flower Children” (maybe it sounds better in German?) sowed more than the city council was prepared to reap. Suddenly, like mushrooms after a rain, the city sprouted hundreds of marijuana plants. All over the place. Anywhere they could grow.

The plants sown were low-THC plants that, while illegal, would be pretty pointless to smoke. The group invited submissions for a photo contest showcasing the beauty of the town’s plants in which, plot twist, everyone was a winner. The results were published online, and the police used them to find the offending plants and remove them—even the pretty little ones planted outside the police station.[4] 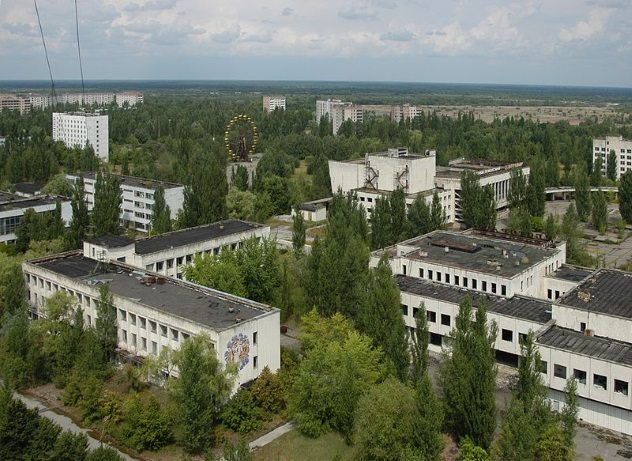 When the Chernobyl Nuclear Power Plant melted down in 1986, a lot of the surrounding area became part of the Chernobyl Exclusion Zone. One of the cities in this area was Pripyat, a formerly bustling city of almost 50,000 people.

Pripyat was evacuated and has been largely left alone ever since. It became not just an abandoned city but one reclaimed by nature, with plants growing everywhere, from the seats of still bumper cars to rooftops adorned by the Soviet hammer and sickle. Trees stretch above the city skyline, and wolves, elk, and boars walk past abandoned shops and schools. It looks like a city past the end of the world, undisturbed by humans, left only to the plants that cover the town square and the animals that brush by them on their way around what is now their city.[5] 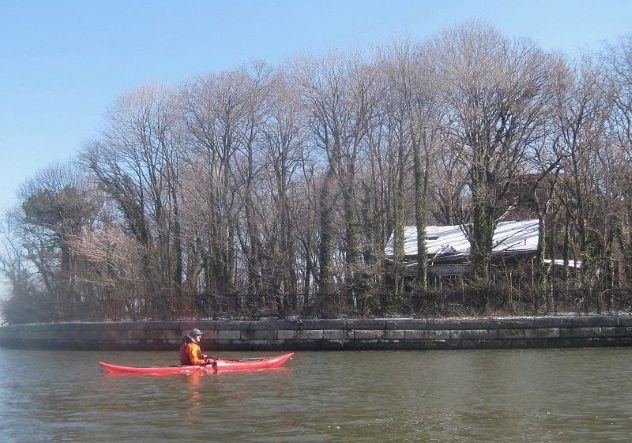 City waterways often have fascinating, storied islands that you can pass by and never know about until you look them up. One of these islands sits between the Bronx and Rikers Island in New York City and is called North Brother Island.

In 1885, the city built Riverside Hospital on the island, which served as a quarantine for patients with communicable diseases such as yellow fever and smallpox. North Brother’s most famous resident was “Typhoid” Mary Mallon, who infected many people while working as a cook, despite not showing any symptoms of the disease. She died on the island of pneumonia in 1938, having been detained there in 1907, released in 1910, and forcibly brought back in 1915.

The island was later used as veteran housing and then to treat heroin addicts. It has been abandoned since 1963 and has been thoroughly reclaimed by nature as a bird sanctuary for black-crowned night herons.[6]

On the island, the still-standing red brick buildings are slowly being draped by vines. Vegetation grows close to the windows, and thick trees that would have been seeds at the time it was abandoned are starting to press near the walls. Some of the floors are blankets of moss. From the Bronx shore, the island looks covered in vegetation, only the chimneys of the hospital a visible sign of what it was. 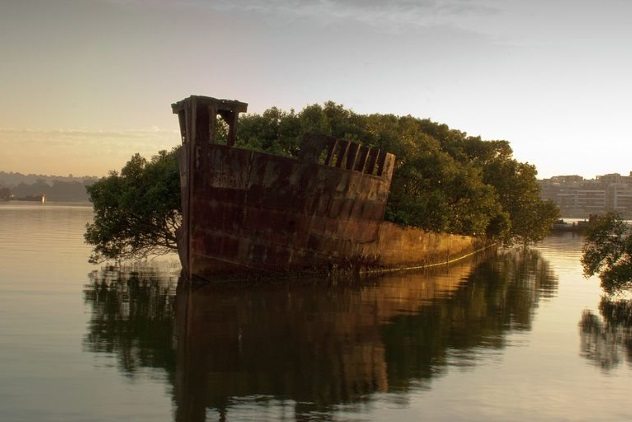 Most places where trees grow are earthly ones. True, some trees do grow on roofs and in rooms, but there is at least one boat where trees have taken root and grown, making the vessel a permanent fixture and attraction in Homebush Bay in New South Wales.

The SS Ayrfield, before it became a water-bound jardiniere, was a steam collier built in the UK in 1911 and registered in Sydney in 1912. It spent the years of World War II taking supplies to Australian soldiers in the South Pacific under the name SS Corrimal. It changed hands several times and was renamed Ayrfield in 1951 by the Miller Steamship Company.

The ship was sent to Homebush Bay to be destroyed in 1972 and is still there. Clearly, it isn’t going anywhere now, and neither are its trees.[7]

It seems that Wangaratta wasn’t the first town to be invaded by tumbleweed, and the sheer volume of tumbleweed that rolled into Clovis, New Mexico, in 2014 might have made that plant attack worse.

People were trapped in their houses, roads were impassable, and Clovis residents had to dig themselves out. The tumbleweed took over the town in piles that covered entire apartments. Luckily for the residents of Clovis, the city did help with the removal of the tumbleweed. Scooping up and disposing of the giant attacking plant balls was a mammoth job.[8] 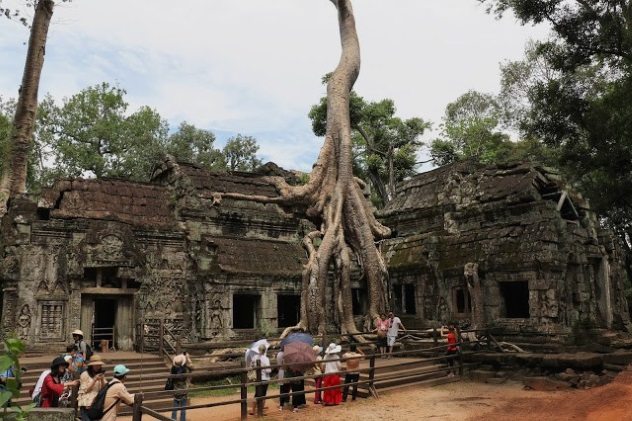 Everyone is familiar with the temple complex of Angkor Wat. Although it isn’t the only Khmer-built temple complex in Cambodia, it seems to be the most well-known. Many people travel to Cambodia specifically to visit its historical temples, many of which have fallen to ruin in the jungle.

The trees that have so gracefully taken over Cambodia’s temples are strangler figs, and that’s not just a name. The trees strangle and crush anything they grow around, from other host trees to the rock temples that they wind around like wooden anacondas, crushing the structures from the foundations to the roofs. The giant trees send roots into every kind of crevice, wedging them open and holding them secure at the same time.

Platforms have been built so that tourists can have their photos taken with the giant roots of the strangler fig, smiling next to a force of nature that is both destructive and protective.[9] 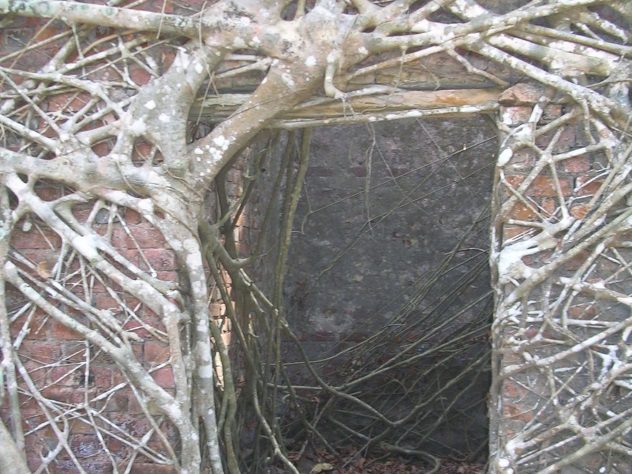 When Britain ruled India, they established a penal settlement in the Andaman Islands. They needed somewhere for the administrators of the penal settlement to live, and they chose Ross Island, which had originally been inhabited for a few years in the late 1780s but had been abandoned. Almost exactly a century later, it was rebuilt, and the British lived there until 1942, when the islands were captured by the Japanese.

After the Japanese surrender, the island was handed back to Britain and then back to India when India won its independence.

The island and its structures—homes, a hospital, a church, shopping facilities, and a big swimming pool—have been reclaimed by the roots of the ficus plant. The plants have all but obscured the buildings, crisscrossing root systems engulfing the structures. The island has become a tourist attraction serviced by a ferry catering to people who come to see what could well be a glimpse into a future in which there are no humans and the plants have reclaimed it all.[10]

Christy Heather is an Australian novelist, professional writer, and criminal lawyer who is not covered in vines.

For some truly terrifying stories about plants, check out 10 Weird And Truly Terrifying Plants and 10 Ingenious Ways Plants Kill.