In 2014, Prayuth Chan-ocha became Thailand’s prime minister after leading a successful coup that ousted the government of Prime Minister Yingluck Shinawatra.[1] While we do not get to hear much about Prayuth (also spelled “Prayut”) over here, he remains a very controversial figure in Thailand, where he is known for his irrational behaviors and controversial statements.

Since taking office, Prayuth has done and said some rather bizarre things. His actions have run the gamut from B-movie comedy fodder to moves straight from the playbooks of dictators. Here are ten examples of Prayuth Chan-ocha’s bizarre and varied antics.

10 He Asked Reporters To Talk To A Cardboard Cutout

In January 2018, Prime Minister Prayuth was in the news after asking reporters to talk to a cardboard cutout of him during a press conference. The stunt was an attempt to avoid answering questions about the planned elections, the increase in political arrests, and the conflict in Southern Thailand.

Prayuth looked like he was about to answer the questions, until his assistants erected a life-size cutout of him right beside him. Then he asked the reporters to direct their questions about politics and wars to the cutout before quickly walking away.[2]

9 He Threatened To Execute Reporters 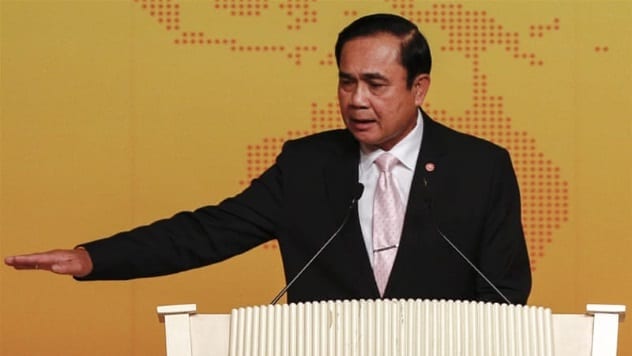 Thai media often criticizes the ruling military junta led by Prayuth. And Prayuth always fires back whenever he has the chance. This came to a head during a 23-minute press conference In March 2015, where Prayuth threw some papers at reporters.

When somebody asked what he would do with media agencies that did not tell the “truth,” Prayuth said he would “probably just execute” them. He added that he would “use a dog-headed execution device” and “deal with the media.”

While Prayuth has often threatened the media, he hasn’t attacked or clamped down on them severely. However, he has certainly had some odd interactions with journalists and cameramen. While the incidents have sometimes raised eyebrows, the government will usually pass them off as jokes.

In December 2014, Prayuth was attending a public event where a cameraman was trying to take a picture of him. He always looked away from the camera after the photographer repeatedly told him to look at it. Prayuth soon got fed up with the cameraman asking him to look at the camera and threw the peel of a banana he was eating at the man.

In an earlier incident, he threatened to smack a reporter after the journalist asked him if he planned to remain prime minister through a coup and not an election. At another time, he pulled the ears of a reporter before running his hand over his head during a press conference.

That person was one of several journalists who knelt down so that they could get close to the prime minister without obstructing the camera. A spokesperson for the government downplayed the incident, saying Prayuth was only teasing the reporters as he always did. He said the Prayuth and the reporters were all smiling during the incident.[4]

7 He Threatened To Shut Down The Media 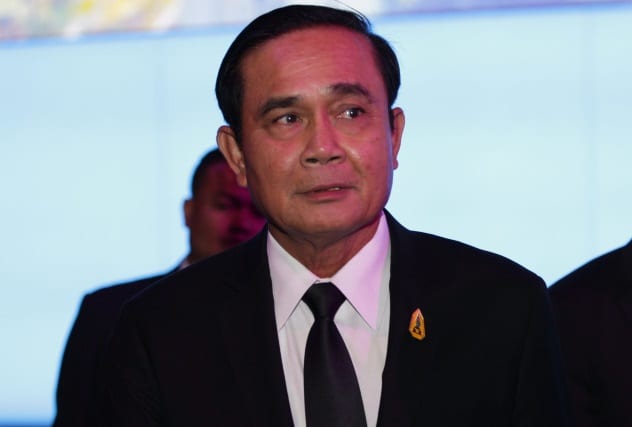 By now, we should have realized that Prayuth has a troubled relationship with the media. While he has often said the press should tell the truth even if they do not support the government, he came clean when he said the media should only say positive things about his government.

Prayuth made the statement in 2015, just one year after becoming prime minister. His government had come under fire after imposing martial law in the state. The government later lifted the martial law only to replace it with even harsher measures. They clamped down on freedom of expression and censored the press.

At the time of issuing the threat, Prayuth said he had endured the criticism from the media for so long that he could not take it anymore. He asked what was wrong with the press and whether they were crazy. Then he threatened to close down any media outlet that criticized him because it was disrespectful.[5]

6 He Offered To Write Soap Operas 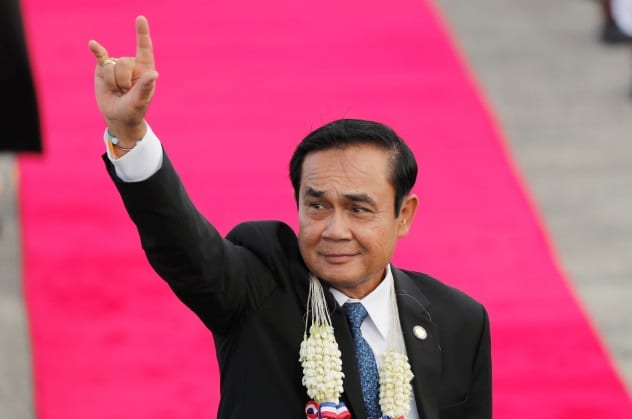 Prayuth doesn’t just have issues with the media. He also has problems with soap operas. He has complained that the soap operas aired on Thai television are too divisive and promote rape and violence. He encouraged scriptwriters to write shows that promoted unity. If they refused, he promised to write them himself.

Considering the sort of person Prayuth is, you wouldn’t expect the last part to be a joke. In fact, he had already commissioned his own scriptwriters to write scripts for soap operas that promote unity, Thai culture, and tourism. He added that he would complete the scripts himself if the writers could not.

One of the soap operas will be about two families that visit Thailand for vacation. The families meet in Thailand and get to like themselves.[6]

Prayuth might be controversial, but he is also cool. Which other country can boast of their prime minister writing six pop songs?

Prayuth’s first song was “Returning Happiness to the People,” which he wrote soon after the coup. His second song was “Because You are Thailand,” which he released toward the end of 2015. He said the song was his new-year gift to the Thais. The lyrics of the song promoted unity and suggested that Thai citizens help him end a divisive Thailand.

Prayuth has also written “Hope and Faith,” “Bridge,” “Diamond Heart,” and “Fight for the Nation.” He wrote “Diamond Heart” (embedded above) for Valentine’s Day in 2018. The song was posted on YouTube on February 9, where it quickly got 33,000 dislikes and just 1,000 likes. (As of this writing, it now stands at 50,000 dislikes versus 9,100 likes, and comments have been disabled.) The song is about two lovers who have a troubled relationship. Many believe the lovers represent the government and Thai citizens.[7]

Prayuth’s latest song is “Fight for the Nation,” which he released later in 2018. The song was composed by Wichian Tantipimolapan, who also composed the theme song to Bupphesaniwat, a popular Thai soap opera. Many believe the song is an attempt to ride on the popularity of Bupphesaniwat.

4 He Threatens His Critics With ‘Attitude Adjustment’ 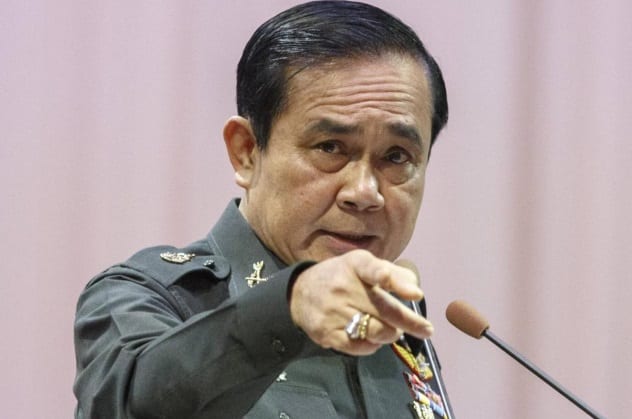 Prayuth has repeatedly threatened his critics with his attitude adjustment program. Here, “attitude adjustment” is merely a nice way of saying “political detention.” Pravit Rojanaphruk, who has had his attitude “adjusted” on at least two occasions, said detainees were usually arrested and detained without any charges pressed against them.

The conditions of the detentions varied. Some detainees were held in camps where they had lots of space, while others were locked up in a cramped room. All detainees were interrogated. The interrogators could be calm and polite or harsh and rude. Pravit underwent a six-hour interrogation during one of his detentions.[8]

Other detainees include ex-minister Pichai Naripthaphan and and former lawmaker Karun Hosakul. As of 2015, Pichai had been detained eight times, but it seems like Prayuth’s government will need to do serious work to adjust Pichai’s attitude. Prayuth just gave up on the whole adjustment thing and threatened to sue if Pichai criticized him again. 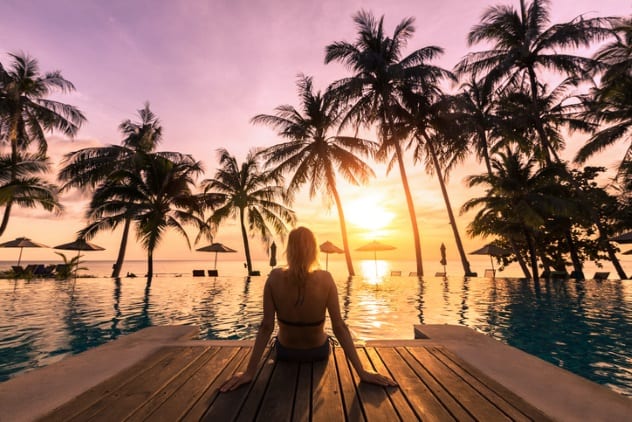 In September 2014, two British tourists, David Miller and Hannah Witheridge, were murdered in Koh Tao island, Thailand. The duo had attended a party on the island the night they went missing. An autopsy revealed that they were struck on the head. Witheridge died of her injuries, but Miller survived the blows, only to drown in the surf. He also had injuries on his hands, suggesting he fought the attackers.

Police rounded up some suspects, including two Britons, 11 Burmese immigrants, and another Asian. As police worked on the murder, Prayuth made the news after suggesting that Thailand was not safe for tourists wearing bikinis. While he was trying to explain that Thailand was not as safe as the tourists thought, he had chosen the wrong words.

He said tourists wearing bikinis are not safe, especially when they are beautiful. He added that the actions of the murdered duo should also be probed. The statement generated negative reactions. The British embassy also contacted his office to inquire what he meant by his statement. Prayuth later issued an apology.[9] 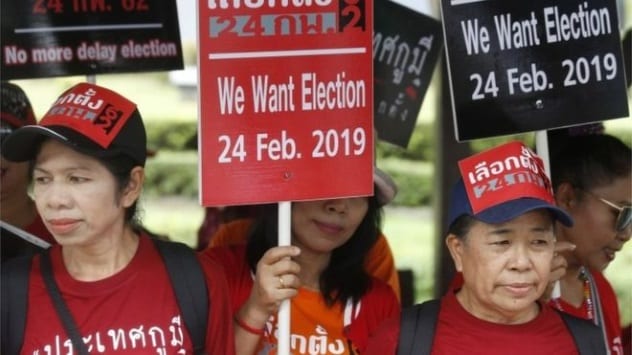 The Thai military junta has promised to return the government to civilians ever since it took power in 2014. However, it seems like the junta does not want to keep its promise. In fact, in March 2015, Prayuth threatened to remain prime minister for life if people continued to criticize him or call for elections.[10]

During the tense press conference, Prayuth promised he would remain in power indefinitely if people continued to ask for elections. He also asked if anybody would die if they did not hold elections. Prayuth had gotten angry during the interview, during which he shouted at reporters, told them he was getting angrier, and warned them against making statements that could get him angrier.

Prayuth’s government has often stated that they needed to create a new constitution before they could hand things over to a civilian government. They finally created the constitution after postponing elections several times. Thais should expect to vote on February 24, 2019. 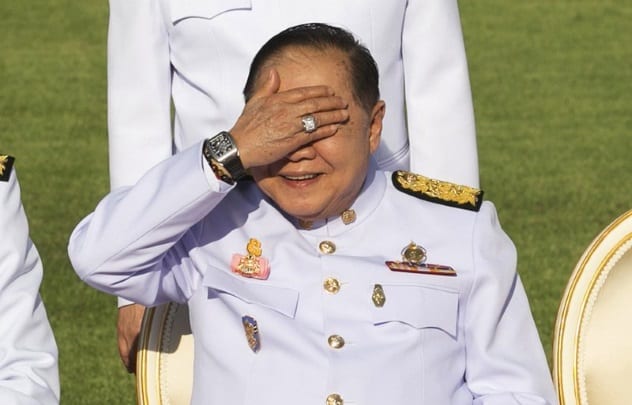 In December 2017, General Prawit Wongsuwan, Thailand’s deputy prime minister and minister of defense, was in the news after he was photographed wearing an expensive wristwatch.

Prawit was preparing for a group photograph with other cabinet members when he put his hand over his face to cover his eyes from the Sun. A photographer took his picture at that moment. People noticed he wore an expensive Richard Mille luxury wristwatch and a diamond ring, which he could not have purchased with his salary. He did not declare them as a part of his assets, either.

An analysis of earlier pictures of Prawit revealed that he had worn 25 different expensive wristwatches at different times. The incident was a low for a military government that claimed to be fighting corruption. When asked for comments, Prayuth said the wristwatches were a “personal matter,” although he added that Prawit will face the law if he was found guilty of corruption.

Prawit denied guilt, claiming he borrowed the wristwatches from a late friend, Pattawat Suksriwong. The National Anti-Corruption Commission investigated and agreed that he had truly borrowed 20-some expensive watches.[11]

Read about more wacky behaviors of politicians on 10 Hilariously Petty Acts By Politicians And Leaders and The 10 Worst Diplomatic Faux Pas By Famous Politicians.