Many of the greatest minds in physics and engineering have spent considerable time thinking about interstellar travel. They have come up with detailed concepts and designs for spaceships that are capable of sending humans to the stars. Each design has its own way to overcome the main challenge of interstellar travel: the distance to the stars.

At 4 light-years away, Proxima Centauri is the closest star to the Earth (other than our own Sun, of course). With conventional rocketry, it would take around 137,000 years to get there. The goal of these designs is to accelerate the ships to a fraction of the speed of light to allow the trip to be completed in less than a human lifetime. All these designs have been proposed as feasible solutions that may actually be put to use in the future. 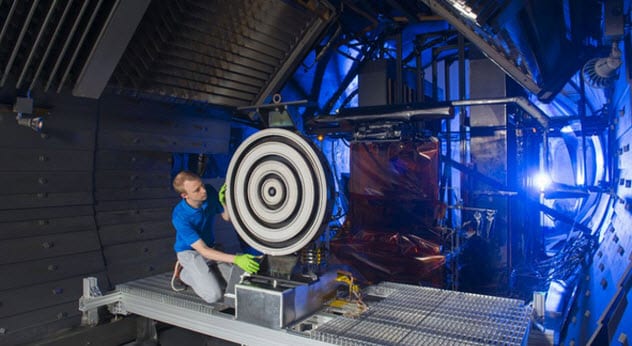 Ion propulsion is a type of engine that has undergone serious development over the past few years. Rockets based on ion propulsion produce far less thrust than conventional rockets.

Although conventional rockets stop accelerating as soon as they leave Earth, ion propulsion rockets can continue propelling the rocket for decades on end. The idea behind this engine is to constantly accelerate the rocket so that it will attain a significant velocity up to 145,000 kilometers per hour (90,000 mph) after several years.

Even so, this is not nearly enough speed to reach the nearest stars. This spacecraft would be better suited for exploring the outer solar system.

Ion propulsion works by taking advantage of the electrostatic properties of particles (the tendency for particles with like charges to repel and opposite charges to attract). The process starts by injecting an inert gas, usually xenon, into an ionization chamber. Then a stream of electrons is injected into the chamber using simple electricity generated by solar panels or nuclear reactors.[1]

As the electrons collide with the xenon atoms, the xenon atoms have some of their electrons knocked off, making a positively charged atom (a positive ion). The like charges of the ions in the chamber push against each other, accelerating the ions.

Using a negatively charged grid, the ions are attracted toward holes at the end of the chamber. There, they are shot out of the spacecraft at tremendous speeds, pushing the spacecraft as they do so.

As a propellant, xenon is extremely efficient and can be stored in vast quantities, making it an amazing fuel source. In addition, ion propulsion systems glow bright blue, making them look exactly like the spaceships in space operas. 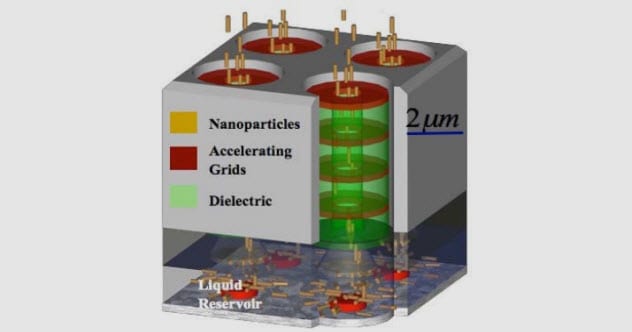 Researchers at the University of Michigan have made an improvement to ion propulsion. The technology is called nanoFET. Instead of xenon atoms, the propellants are large, man-made particles called carbon nanotubes. They can be charged and accelerated just as easily as xenon atoms, if not better. But they are far more massive, meaning their ejection will give the spacecraft a much bigger push.

However, this process is messy and very complex. A spacecraft would require trillions of these particles to be ejected constantly. NanoFET has a long way to go.[2]

Yes, this is real. Nuclear bombs could actually be used for interstellar spaceships. It may sound barbaric, but it is one of the most practical designs on this list.

Every three seconds, a small nuclear bomb, or bomblet, would be ignited at the rear of the spacecraft. The energy from the explosion would be absorbed by shock absorbers on a “pusher plate” that would accelerate the spacecraft to 3 percent of the speed of light.

You might expect that the passengers of these spaceships would experience the worst turbulence of their lives. However, the energy of the bombs is expected to be transferred quite nicely and the trip would be smooth.[3] 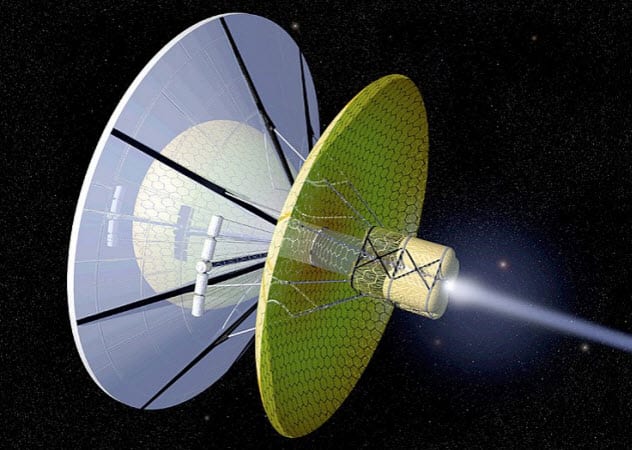 Nuclear fusion is a process that occurs in the cores of all stars and is the source of each star’s heat. Fusion happens when atoms are subjected to extreme temperatures and pressures. Under these conditions, light atoms fuse together to make heavier ones. A by-product of this reaction is tremendous amounts of thermal energy.

Fusion is a far more powerful and energetic process than fission (when nuclear bombs split atoms). The most common form is hydrogen fusion, which creates helium. Several designs for interstellar spacecraft capitalize on hydrogen fusion.

The hydrogen can be stored on board or collected from the interstellar medium (the matter and radiation that exists between stars) as the ship travels. Spacecraft that scoop up hydrogen as they go are called ramjets. 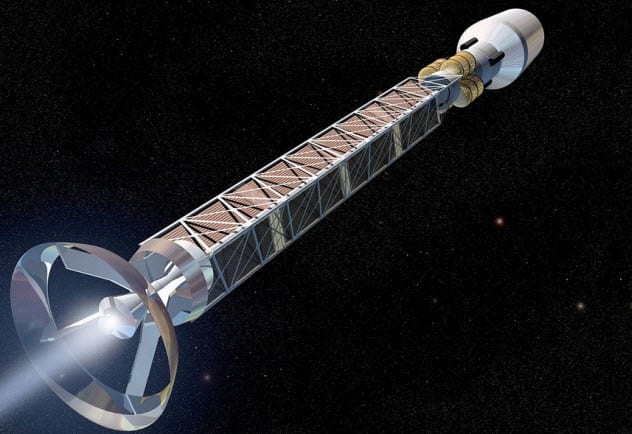 A particle of antimatter has the opposite properties of its regular matter counterpart. A proton has a positive charge, and an antiproton has a negative charge.

What does antimatter look like? You have never seen it because it is only synthesized in laboratories. The reason: If a particle of antimatter comes into contact with a particle of regular matter, they will annihilate each other in an astonishing explosion. One hundred percent of the particles’ mass is converted into a tsunami of energy.

To give you perspective, the largest nuclear bombs today convert 0.1 percent of their mass to energy. However, before all the mass has been converted to pure energy, a few short-lived particles are created as products of the reaction. A majority of these particles are called pions.

In an antimatter rocket, these pions would be used as a propellant and then expelled from the ship before they completely convert to energy. It is estimated that a ship propelled by antimatter annihilations could travel at 40 percent of the speed of light. Unfortunately, antimatter is incredibly difficult to synthesize. At present, we do not have the technology to create sufficient amounts of it.[5] 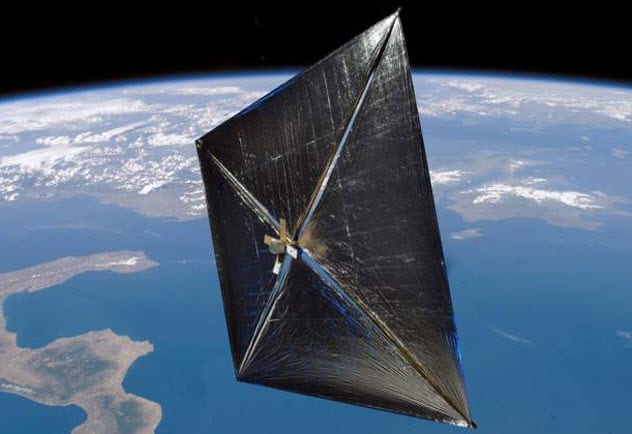 You may have seen them in Star Wars, but solar sails are a reality. Tests of these spacecraft have already been conducted by NASA and The Planetary Society.

The spacecraft works like a sailboat. Instead of wind, however, the propellant is sunlight. The ship consists of a small payload attached to a massive, ultrathin mirror, sometimes 30 meters (100 ft) across.

Pressure is exerted on the sail as vast amounts of photons are reflected off the surface of the mirror. Over time, the pressure builds and the spacecraft can reach speeds up to 241,000 kilometers per hour (150,000 mph).[6]

While fast, these spacecraft do not go anywhere near the speeds required for interstellar travel. However, as you will see soon, the concept of solar sails can be modified to reach some of the fastest speeds on this list. 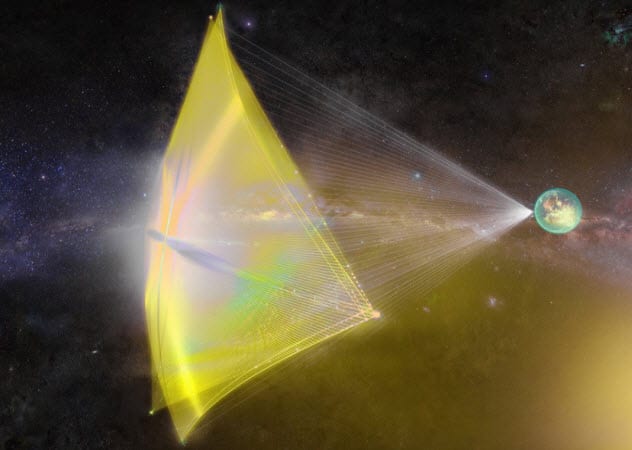 The idea to propel spacecraft to extreme speeds using powerful laser beams has received the support of many powerful people, including Mark Zuckerberg and the late Stephen Hawking. The proposal, called Breakthrough Starshot, would send thousands of tiny probes 4 light-years away to Proxima Centauri, the closest star to Earth other than the Sun.

The probes will be tiny, pellet-like wafers containing many valuable instruments and weighing only a few grams each. Like solar sails, they will be connected to “lightsails” and sent into space.

From a station back on Earth, large arrays of ultrapowerful lasers will shoot 100 gigawatts of focused laser beams at the lightsails, propelling them at 20 percent of the speed of light—over 160 million kilometers per hour (100 million mph). At that speed, even the tiniest obstacles in space, such as dust, can destroy a probe.[7]

Thousands of probes will be sent to ensure that at least a few will reach their destination. The probes from Breakthrough Starshot should be able to make it to Proxima Centauri b in 20 years. 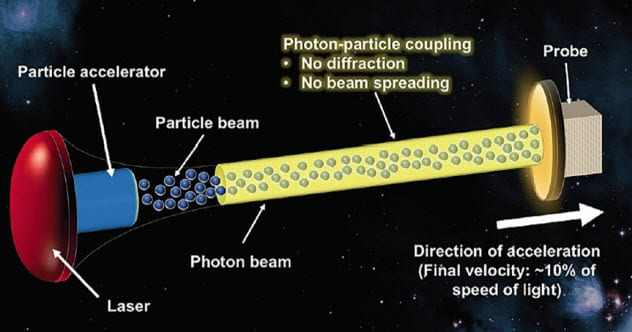 One of the flaws in Breakthrough Starshot is an effect called “beam spreading.” This is the tendency for beams of light to spread out as they move. Beam spreading threatens to reduce the power that lasers can have on a lightsail. Some scientists have proposed using jets of particles instead of lasers. However, these also suffer from beam spreading. 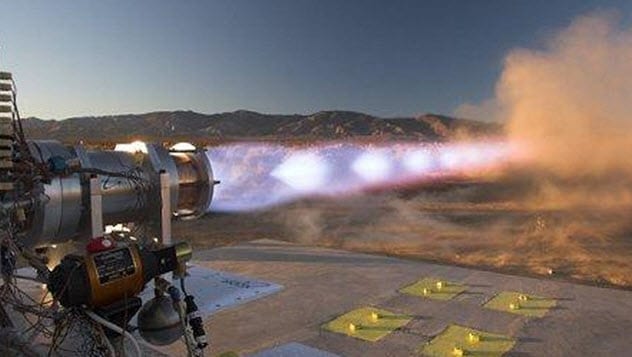 Traditional rocket fuel uses liquid hydrogen and an oxidizer, usually liquid oxygen. Besides being toxic, the fuel is difficult to store as it is not very dense, meaning you cannot stockpile a lot of it. In addition, it must be stored at -252.9 degrees Celsius (-423.2 °F).

For those reasons, rocket pioneers such as Elon Musk and Jeff Bezos have shifted toward the new methane fuel. Methane (CH4) is nontoxic, can be stored at much higher temperatures, and is denser than hydrogen—allowing for a lot more of it to be stored.

There is one caveat, though. Although common on Earth, methane is not easily accumulated. However, a place nearby has lakes of liquid fuel waiting to be taken. Titan is Saturn’s largest moon. Besides Earth, Titan is the only known place in the universe with a liquid on its surface. Titan has vast lakes of ethane, propane, and, best of all, methane.

If we could build a launchpad on the surface of Titan, we could fill the rocket with vast amounts of methane fuel. Furthermore, Titan’s gravity is much lower than that of Earth. As a result, far less fuel would be required for liftoff, which consumes more fuel than any other phase of the trip. Launching a spacecraft from Titan could take us to the stars.[9] 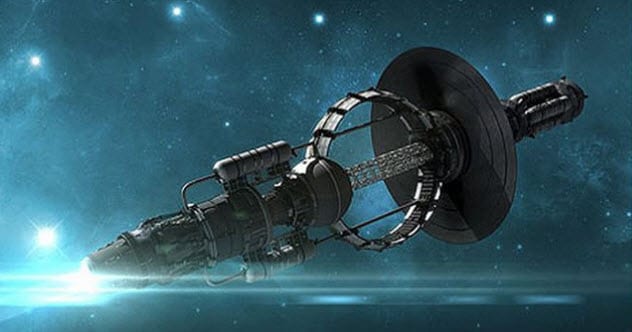 Of all the spaceships on this list, the black hole starship is obviously the most unrealistic. Nonetheless, it is an intriguing idea. It takes advantage of Hawking radiation, a phenomenon discovered by Stephen Hawking.

Tovi Sonnenberg is a high school student in New York and an amateur astronomer affiliated with the American Association of Variable Star Observers (AAVSO). Follow him on Instagram and YouTube.

Read more about intriguing technologies for space exploration on 10 Proposed Solutions To The Problems Of Interstellar Travel and 10 Awesome And Wacky Space Technologies Of The Future.