Many animals have truly bizarre symbiotic relationships. The simple description of symbiosis is a mutually beneficial relationship involving physical contact between two organisms that are not of the same species.

These relationships can be held together through cleanliness, protection, transportation, and even finding food. At times, however, there is a thin line between helpful and harmful actions. For now, let’s look at relationships that are mutually beneficial to organisms both large and small. 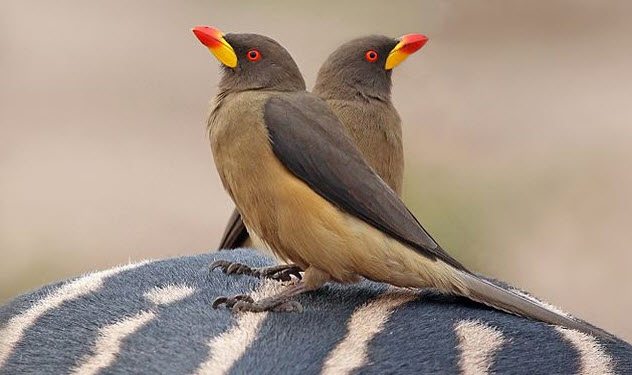 Spending much of their day atop elephants, rhinos, zebras, and cape buffalo, African oxpeckers eat ticks from their mammalian hosts’ skin. This gives oxpeckers all the nutrition they need. Additionally, the hosts seem pleased that the birds remove ticks and parasites from their skin.

Scientists believe the relationship began a long time ago as the oxpecker’s beak appears to be designed specifically for digging deep into the host’s thick skin (ouch!) to find its food. Oxpeckers also emit a screech of alarm, thus acting like a danger warning for other birds and the host. However, the relationship between the oxpeckers and the hosts is not always mutually beneficial.[1]

While aiding with the removal of ticks, oxpeckers also suck the blood out of open wounds in their hosts’ skin. This is another way for the bird to get nutrients, making it more like a parasite. Although this blurs the symbiotic relationship between the two organisms and risks infection for the hosts, elephants and zebras may find this a small price to pay for the oxpeckers’ cleaning service.

Oxpeckers are not always helpful, though. At times, they will pass up eating a tick if it is not filled with blood (a main nutrient for the bird). In those cases, the birds will let the ticks continue to feed on the hosts’ skin until the ticks become more palatable.

“Can I bum a ride, man?” This is what some sea anemones say to certain crab species in the ocean. Sea anemones will hitchhike on the backs of hermit crabs, providing the anemones with a lift over the seabed. While getting a ride, the anemones use their tentacles to grab leftovers from the hermit crabs’ meals.

But what does the crab get out of this relationship?

The sea anemone protects the hermit crab from hungry octopuses. With the barbed tentacles of the sea anemone on the crab’s back, the crab becomes a bit less tasty to predators. Furthermore, crabs help fend off creatures in the mood for a sea anemone snack.[2]

Interestingly, this relationship doesn’t happen by accident. Crabs will intentionally seek out anemones to place on their backs. In fact, when the hermit crab changes shells, it will poke the anemones with its pincers and reattach them to its back.

It’s a win-win for these organisms. 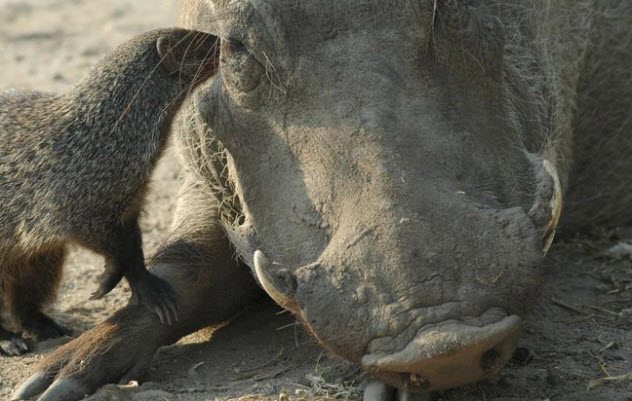 Heading back to the African savanna, scientists in Uganda have witnessed a strange friendship between warthogs and mongooses. In Uganda’s Queen Elizabeth National Park, warthogs have been seen purposely lying down in the dirt if mongooses are encountered.

The warthogs are given a grooming while the sharp-toothed mongooses pick off insects and especially ticks. Hence, the mongoose gets a meal and the warthog gets clean. In some instances, numerous mongooses will nibble at the warthog’s tough skin, even crawling on top of the pig if need be.[3]

If you’re a fish and don’t have a dental plan, then you are still in luck. Just visit a “cleaning station” at your local reef where cleaner fish, such cleaner wrasses and gobies, wait to mop up the unwanted parasites and other debris from your mouth and other body parts.

After drifting into a reef area set up as a cleaning station, fish—such as parrotfish, damselfish, and even sharks—will assume a specific pose that tells the cleaner fish that it is safe to approach. Then the cleaner fish begin their scrumptious buffet of the parasites, mucus, and dead tissues from their client fish.

If the cleaner fish becomes too aggressive and nibbles too much tissue or mucus, the symbiotic relationship can be terminated by the larger client fish. The best-known cleaner fish are the cleaner wrasses that live among the coral reefs of the Pacific and Indian Oceans. These fish often showcase their bright blue stripes, making them highly visible to larger fish that need a cleaning.[4] 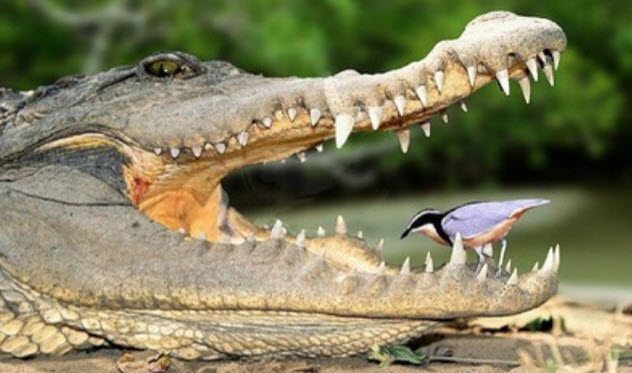 Crocodiles in Africa have a unique relationship with plovers. After a meal, a crocodile will walk onto the riverbank, find a cozy spot, and sit with its mouth wide open. This action signals the little bird to enter the crocodile’s mouth to pick off tiny bits of food that remain in the huge reptile’s teeth.

Plovers aid in cleaning the mouths of their huge crocodilian clients. The brave little bird’s actions help to prevent infection from raw meat for the crocodile and to remove insects that crawl atop the crocodile’s skin. Therefore, the tiny birds get a free meal and the crocodile gets a free dental checkup and cleaning. Not a bad arrangement!

If the bird encounters or senses danger from another animal while snacking within the crocodilian jaws, the plover shrieks a warning call and then flies away. The plover’s scream signals the crocodile to dash into the water and disappear from any potential threat.[5] 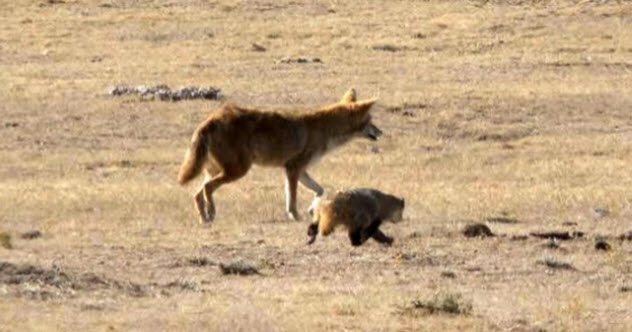 How does this arrangement work?

Although only one of the predators leaves with a meal, much research on the relationship shows that the collaborative effort of these animals increases the chances of getting food for both hunters. Badgers and coyotes eat the same things and naturally compete with each other for food. However, the crafty prairie dogs are not always easy to catch because they don’t stray far from their burrows. So the badger-coyote alliance aids in hunting them.

A few coyotes may congregate in loose assemblages, but most lead solitary lives as they rarely hunt in packs. Interestingly, the badger is an even more solitary creature, making its partnership with the coyote even more bizarre.

Research has suggested that coyotes that partner with badgers catch around one-third more prey than lone coyotes.[6] Next time you’re out on a hike, look for these two guys hanging out with each other. 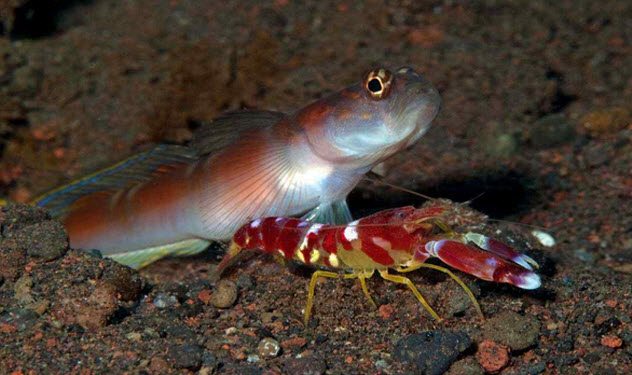 Pistol shrimp and gobies seem to be the best of buddies on the ocean floor. As roommates, these two very different creatures uphold a clean and clear symbiotic relationship. Shrimp that don’t mind rooming with gobies dig a hole while the fish guards and protects the shrimp and the hole.

With its excellent eyesight, the goby easily spots predators and repays the little shrimp by alerting it to danger so it can hide. Hence, the fish and shrimp become roommates, sharing a mini underwater cave with each other.

Since pistol shrimp are mostly blind, the shrimp tells the goby when it is leaving the home to find a snack. The shrimp will then touch the fish with its antennae to maintain contact as the two move through the water. As the pistol shrimp lives on the seafloor with little cover, it is essential for the creature to maintain a symbiotic relationship with the goby.

It has been witnessed that gobies even collect algae and other food items for their shrimp roommates. The goby may also transport algae to the entrance of the burrow so that the blind shrimp can easily access it. If danger is sensed, the goby flicks its tail as a warning.

In return for this protection, the shrimp provides the goby with a home. The goby also uses the safety of the burrow to entice his mate with a ritual that takes some time (awkward!). Amazingly, more than 100 species of goby have been identified in symbiotic relationships with shrimp.[7] 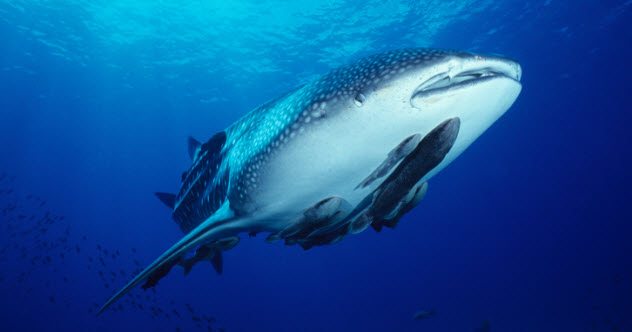 Remoras (aka suckerfish) are fish that typically measure between 0.30–0.90 meters (1–3 ft) in length. Strangely, their front dorsal fins have evolved to act like a suction cup that sits on the top of their heads. This lets remoras attach to the undersides of passing manta rays or sharks.

A remora will use its host as transportation and will eat scraps of food left over from the host’s meals. However, this is not a one-way relationship as the shark or manta ray gets a cleaning from the attached remora, which removes parasites and bacteria from the host’s skin. If bacteria remain on a shark’s skin, it can cause irritation or even an infection. Therefore, the remora plays an important role for its much larger host.

Sharks have also been observed protecting their remora friends so as to benefit from their cleaning services. Most sharks don’t mind remoras. However, lemon sharks and sandbar sharks can be aggressive with remoras and sometimes eat them.[8] 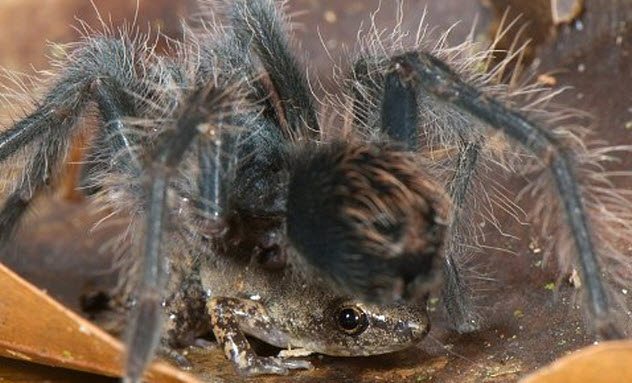 Instead, the large spider allows the tiny frog to share the spider’s burrow. Both creatures engage in a mutually beneficial relationship in which the spider offers the frog protection from predators and the frog eats ants that may attack or consume the eggs of the tarantula.

Some spiders have been documented to even grab the frogs, study them with their mouthparts, and then let them go unharmed.[9] 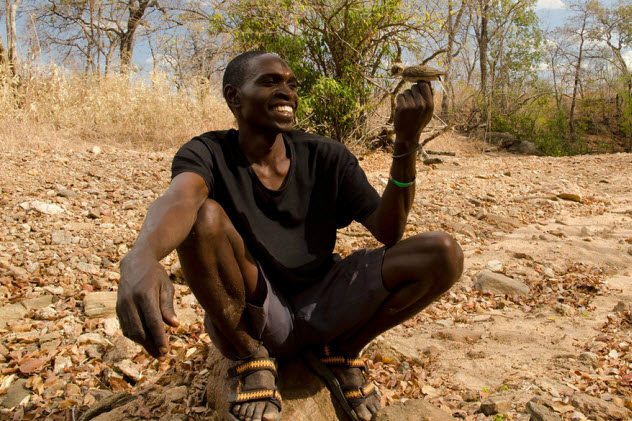 Our final example of symbiosis exists between an African bird known as the greater honeyguide and local tribespeople in Tanzania called the Hadza. After responding to a distinct human call, the small bird leads the person to honey.

Local Hadza people use many types of call to attract the birds—such as shouts, whistles, and even spoken words. As the people make the calls to locate a honeyguide, the bird changes its sound to let the people know when it is close to a beehive. Strangely enough, the greater honeyguides are not domesticated or formally trained in any way.[10]

So, why would a bird go out of its way to help humans?

It turns out that honeyguides like a nicely cooked meal just like we do. After spotting the beehive, the tribesmen climb up the tree to steal pieces of honeycomb. The Hadza use smoke to subdue the bees so that the tribesmen can snatch some of the honeycomb from the hive.

Afterward, they leave pieces of smoked honeycomb out so that the birds can snack on it. Scientists believe that the relationship between African tribespeople and honeyguides is thousands and possibly millions of years old. However, the unique sounds used by the tribespeople have most likely evolved over time and by geographical region.

Read more fascinating facts about animal relationships on 10 Amazing Acts Of Cooperation Between Different Animal Species and 10 Of The World’s Most Romantic Animals.