If the rest of the week has got you down a little, perhaps this list can cheer you. Here, we only talk about stories that are positive, amusing, or inspirational. Meanwhile, you can also check the Saturday offbeat list for a glimpse at some of the strangest news items that made the headlines.

This week, we have two stories about awesome grandmas. There are also a few heartwarming tales about children fighting to overcome adversities and the people in their lives who are helping them to achieve their goals.

10 One Good Deed Deserves Another 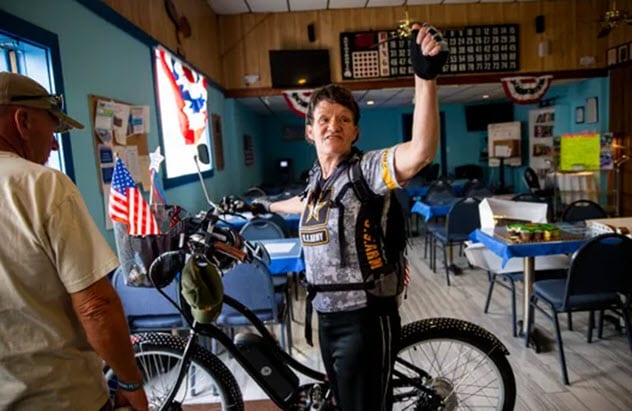 After receiving an electric bike as a gift from various veterans organizations, a former soldier set off on a 64-kilometer (40 mi) ride to help raise money for her benefactors.

Che Orr enlisted when she turned 18, upholding her family’s tradition of military service. She served for 12 years, but an injury during Desert Storm left her unable to drive due to seizures. Now multiple veterans organizations like the American Legion Auxiliary, AMVETS, and the AMVETS Ladies Auxiliary along with private donors raised $1,500 and purchased for her an electric bike.

Keen to repay this kindness, Orr organized a bike ride between several Florida posts of the American Legion to raise awareness and funds for the veterans community. She set off from East Naples and finished in Fort Myers. The event raised over $2,500, and Orr plans to make it an annual tradition.[1] 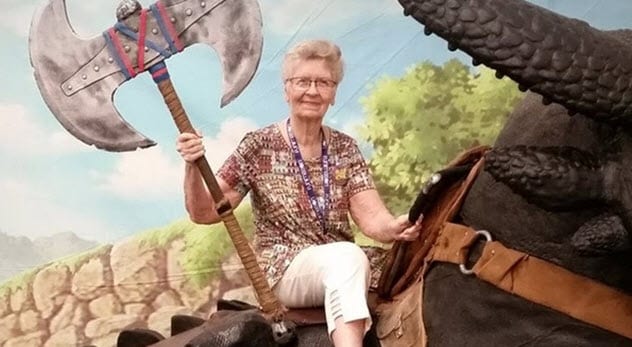 Shirley Curry has found online fame in her eighties by posting videos on YouTube of herself playing The Elder Scrolls V: Skyrim. Now, following a fan petition with over 50,000 signatures, she will be immortalized as a character in the next game in the franchise.

At first, Shirley posted a few videos for fun. One day, they made their way to Reddit, and the grandmother of nine was startled the next morning to find over 11,000 emails from fans in her inbox. Now, Shirley has over half a million subscribers and has embraced her new persona of “Skyrim Grandma.”[2]

Her fans launched a petition to get Shirley included in Elder Scrolls VI. The franchise recently marked its 25th anniversary, and the company behind it, Bethesda, announced Curry’s inclusion during a celebratory stream. 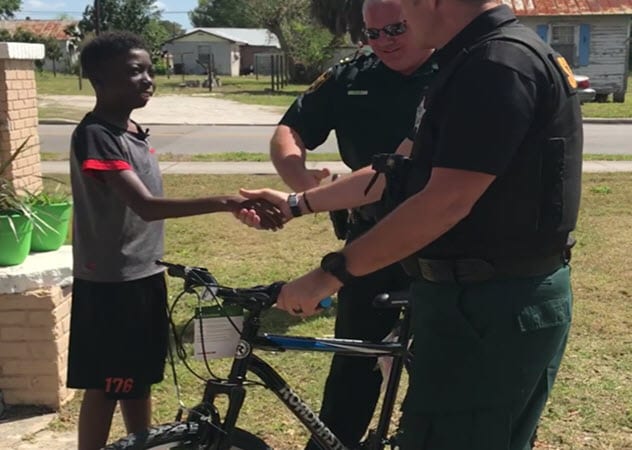 Sheriffs from Polk County, Florida, surprised a 13-year-old leukemia patient with a new bike after his previous one got stolen.

Teenager Daylin Campbell from Lake Wales, Florida, got a mountain bike for Christmas. It even had custom stickers on the sides that said “Daylin strong.” However, he never got to take it out for a spin. At the time, he was too weak from his battle with leukemia. Before he could build up his strength, someone stole the bike.

Officers from the Polk County Sheriff’s Office decided to do something to cheer up Daylin while they are looking for the thief. They showed up at his home with a brand-new bicycle complete with lock and helmet. In a Facebook update, the sheriff’s office confirmed that the boy is now in remission. They hope that the bike will “help him enjoy being a kid again.”[3] 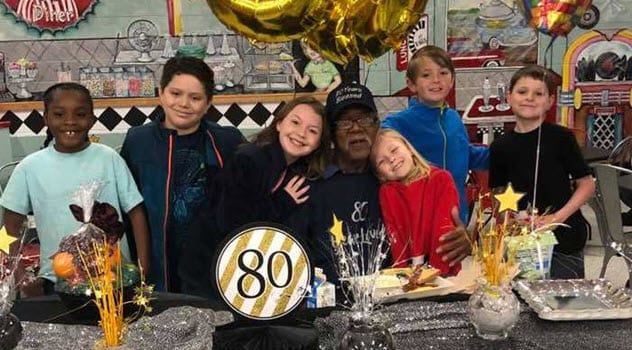 March 27 was Haze Mabry’s 80th birthday, and he expected it to be a day like any other. He would walk into Pike County Elementary School in Georgia where he works as a janitor and keeps the place clean. Instead, he found almost 800 students lining the hallways to sing “Happy Birthday” to him and give him handmade greeting cards.

Mabry walked the school corridors as children chanted “Mr. Haze” and occasionally stepped out of line for a hug. In the end, he had so many birthday cards that the students helped him collect them into several buckets.

Lori Gilreath, a teacher who helped organize the surprise celebration, believes that Haze is the “most loved person in [this] whole building.” In an interview, Mabry said he felt like the “old lady in the shoe” and the students were his children. He spent the weekend going through all the birthday cards because he wanted to make sure he read each one.[4]

6 A Remarkable Act Of Compassion 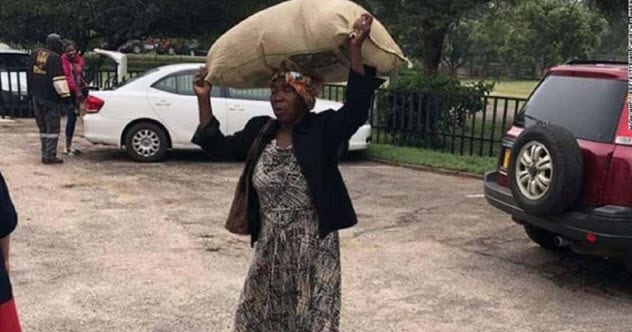 One selfless act of a grandmother from Zimbabwe has earned her a huge reward courtesy of one of the country’s richest people.

Cyclone Idai devastated Africa last month. One of the countries that was hit the hardest was Zimbabwe, which suffered from flash floods that killed hundreds of people and displaced hundreds of thousands of others.

When she heard about the damage, Plaxedes Dilon wanted to help. She filled a bag with kitchen supplies and clothes and headed for the disaster relief center at the Highlands Presbyterian Church.

There was one more problem, though. The center was 16 kilometers (10 mi) away, and Dilon didn’t have money for a bus ticket. Even though she is in her seventies, the great-grandmother walked the whole way while carrying the bag on her head.

Word of Dilon’s determination and herculean effort reached Zimbabwean billionaire Strive Masiyiwa who described it as “one of the most remarkable acts of compassion I have ever seen.” He pledged to reward her kindness by building her a house anywhere she wants in Zimbabwe and giving her a $1,000 monthly allowance for life.[5]

A simple letter from a seven-year-old sea turtle enthusiast persuaded a major retailer to ditch plastic straws and use a more environmentally friendly alternative.

Benjamin Ball visited the flagship L.L.Bean store in Freeport, Maine. The young boy bought a lemonade inside the store’s cafe. He asked for a paper straw, only to discover that the shop stocked just plastic ones.

Benjamin might only be seven years old, but he is a passionate animal lover and knows that plastics do a lot of harm to ocean life. When he got back to his home in Carlisle, Pennsylvania, he wrote a letter to Steve Smith, president and CEO of L.L.Bean. The boy had a simple request: to use paper straws instead of plastic.

In 24 hours, Benjamin received a reply from Smith. The businessman found his letter to be “articulate, well-reasoned, polite, yet passionate” and promised to do something about it. Since then, L.L.Bean has announced that its cafeterias and retail affiliates will only use 100 percent corn biodegradable straws.[6] 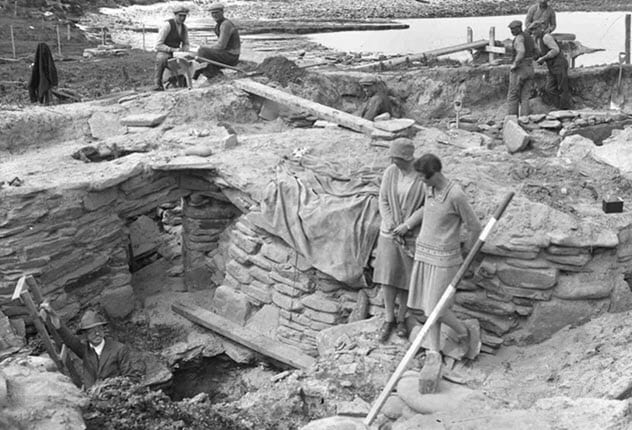 Online sleuths put their thinking caps on and tentatively identified four female archaeologists who helped excavate Skara Brae and were simply dismissed as visitors or tourists.

Back in 1850, a huge storm devastated Scotland. On the positive side, it also unearthed Skara Brae, a Neolithic village that goes back over 5,000 years. However, it wasn’t until the 1920s that the site was thoroughly investigated by a team under the leadership of Professor V. Gordon Childe from the University of Edinburgh.

Some photographs from that time recently made their way online courtesy of the Orkney Library and Archive. Four women who appear in the images have been categorized as “visitors” in a book about the dig.

However, closer inspection of the photos suggests that they were more than that. The women have muddy shoes, and one of them can be seen holding a trowel. The back of one of the original photographs identifies Professor Childe and “4 of his lady students.”[7]

Unfortunately, women in science having their contributions minimized, even ignored, has been a common problem throughout history. On this occasion, though, armchair detectives got to work to identify four archaeologists who helped excavate the most complete Neolithic village in Europe. Although this isn’t definitive, they have been recognized as Margaret Simpson, Margaret Mitchell, Mary Kennedy, and Margaret Cole. 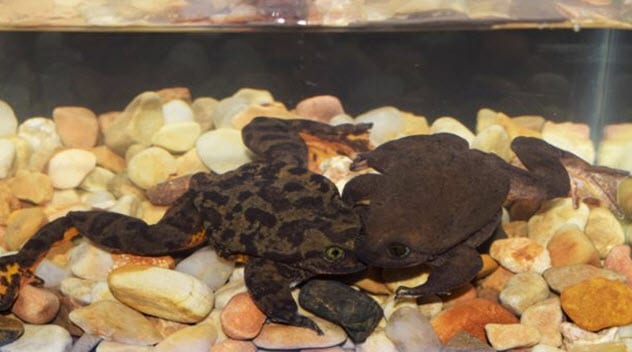 Romeo, once dubbed the “world’s loneliest frog,” had his first date with Juliet, and it went so well that the pair have already been moved in together.

Back in January, we talked about Romeo the Sehuencas water frog. For 10 years, he was believed to be the last of his species because scientists were unable to find a female for him.[8]

However, a recent expedition had finally turned up five new frogs. One of the females was named Juliet and was paired with Romeo in the hopes that sparks would fly between them.

It would seem that sparks did, indeed, fly. The couple had their first date on March 1, and conservationists were there to film every moment of it. Since it went well, researchers were quick to put them in the same aquarium. As herpetologist Teresa Camacho Badani said: “When the fate of an entire species is on the line, there’s really no time for taking it slow.”

Romeo has begun calling again, signaling that he is ready to mate. He also follows Juliet around the tank and shares his worm meals with her. Unfortunately, he might be a little rusty as he is struggling to get into the right breeding position (amplexus). Scientists are hopeful that the couple will produce baby Sehuencas water frogs in the near future.

2 Reach For The Stars 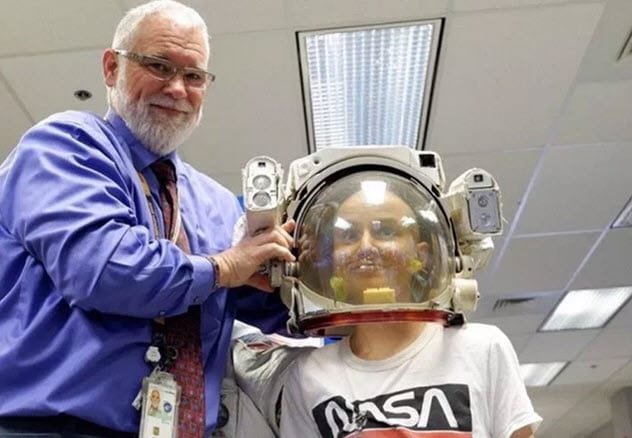 It was a hell of a week for 13-year-old cancer patient Benjamin Lepage from Saint-Joseph-du-Lac, Quebec, Canada. A trip to the NASA Space Center in Houston, Texas, allowed him to live his dream. On Monday, a third round of chemotherapy proved successful.

Benjamin was diagnosed with extraskeletal myxoid chondrosarcoma. He had undergone chemo, but the first two attempts were ineffective. His mother reached out to the Children’s Wish Foundation of Canada to see if they could help with his ambition of becoming an astronomer. They arranged for a visit to the space center last week.

Benjamin and his family first saw the Rocket Park with astronaut Jeremy Hansen. Stan Love showed them around the Neutral Buoyancy Laboratory while Canadian astronaut Jennifer Sidey gave them a tour of space station training mock-ups.

They visited the Mission Control Center where Benjamin talked with fellow Quebecois David Saint-Jacques, currently aboard the International Space Station. Lastly, the boy got to control the Space Station Remote Manipulator System, also known as the Canadarm.[9]

Despite Benjamin’s trip, the best was yet to come as a new, more aggressive session of chemotherapy proved successful on Monday, right on his 14th birthday. 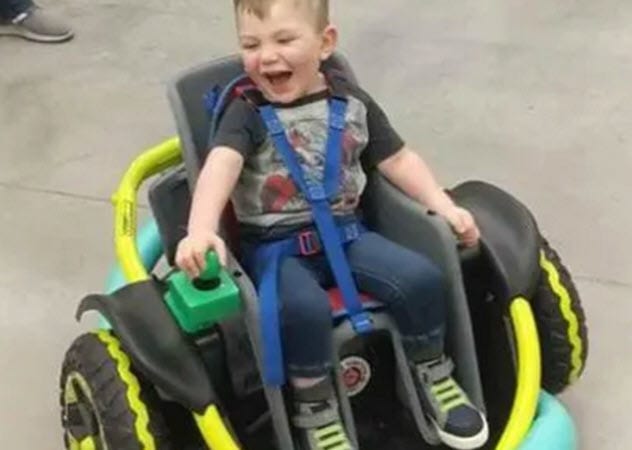 A high school robotics team built a customized toy car for a two-year-old who cannot walk.

Cillian Jackson from Farmington, Minnesota, was born with a genetic condition that left him immobile. His parents found out about a program called Go Baby Go. It provided modified toy cars for kids with limited mobility so it would be easier for them to get around. Unfortunately, the organization did not have a chapter anywhere near the Jacksons’ home.

The robotics team from Farmington High School stepped in. They took a Power Wheels toy car and modified it so Cillian could use it. They had to take out the electronics and redo the wiring.

The seat needed to be replaced with one that fit the young boy. Also, the students had to write new code so that the motor would respond to one multidirectional joystick instead of the two joysticks originally fitted on the car.[10]

The robotics students presented Cillian with his new ride back in December. They reunited last week after the boy had a bit of time to get used to the controls.

The car has been a success. Cillian’s mother, Krissy Jackson, believes that the ability to make his own choices helped her son rediscover his curiosity. It is also good practice for when he grows up and his insurance will cover a motorized wheelchair.