The world recently watched in horror as Notre-Dame Cathedral in Paris was engulfed in a blaze which caused extensive damage to the centuries-old building. The cathedral also housed many artistic treasures and artifacts, some of which were damaged in the blaze. Restorations to the cathedral were underway at the time of the fire, and investigators have been examining whether this may have contributed to the blaze, currently believed to have been caused by an electrical short-circuit.[1]

Many of our world treasures are housed in climate- and light-controlled rooms in specialist museums and galleries. Necessary restoration work is often undertaken by teams of specialists, who painstakingly preserve these artworks and artifacts for the future. However, there have been a number of restorations in recent years which have caused art and architectural historians to ask, “What were they thinking?”

In the past, these restoration failures may have been hidden from view. Art and history lovers today, however, are been quick to take to social media to share some of these debacles. Many were the work of well-meaning amateurs, while some bungled projects were the work of professionals. They do say art is in the eye of the beholder. 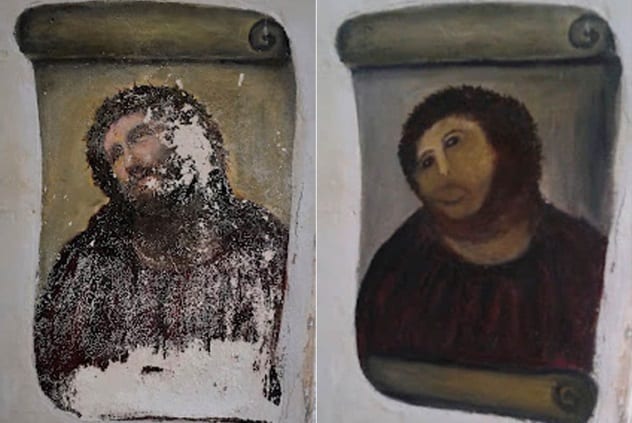 In 2012, Spanish painter Elias Maritinez’s famous fresco Ecce Homo in the Borja Church was beginning to look a little dilapidated, so a parishioner in the small village church decided to give the artwork a bit of a spruce-up. However, not only the congregation but also the rest of the world was horrified when Cecelia Gimenez’s work was revealed.

The original artwork was barely recognizable. Now dubbed “Monkey Christ,” the botched restoration work went viral. Christ’s crown of thorns looked more like a woolly hat, and the facial features bore little resemblance to Martinez’s original work. The original features had been all but obliterated.[2]

In a strange turn of events, Gimenez actually did her town a huge favor, just not exactly in the manner in which she intended. The octogenarian’s botched restoration attempt on the fresco became so famous that it is now a major tourist attraction. It attracts far more visitors to the small Spanish town than it did before. A comic opera was even staged in the town of Borja to commemorate Giminez’s failed brush with artistic restoration work. 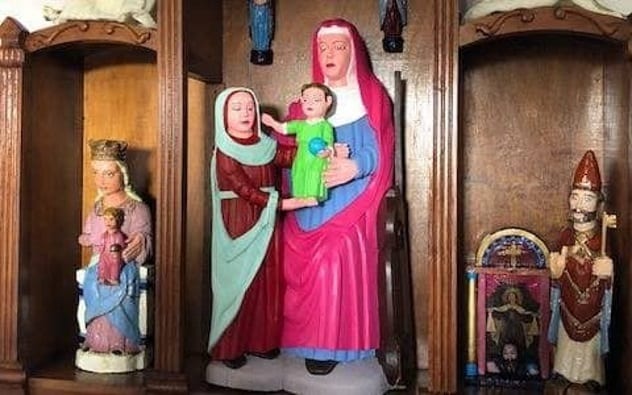 Also in Spain, 15th- and 16th-century wooden carvings in a church in Ranadoiro were given an update which art experts labeled “a disaster.”

Although the statues had been professionally restored 15 years previously, a well-meaning local parishioner thought the drab wooden carvings could do with a splash of color to brighten them up. After convincing the priest to let her take them home for a while, she began work on the statues. For more than a year, she worked to painstakingly paint two carvings of the Virgin and Child and one of St. Peter to give them a more modern feel.

The end result, revealed in 2018, was likened to “children’s toys,” with one of the Mary carvings resembling a Barbie doll. In the other, the mother of Christ’s robes were turned a garish pink, with the infant Christ wearing lurid green robes.

While the artist claimed she “painted them as well as she could,” art historians were furious. Officials questioned why an inexperienced restorer had been allowed to remove the artifacts from the church to undertake the transformation. Several coats of common household paint had been used to decorate the statues. It was unclear whether the carvings, which had enormous historic and artistic value, would be able to be salvaged.[3] 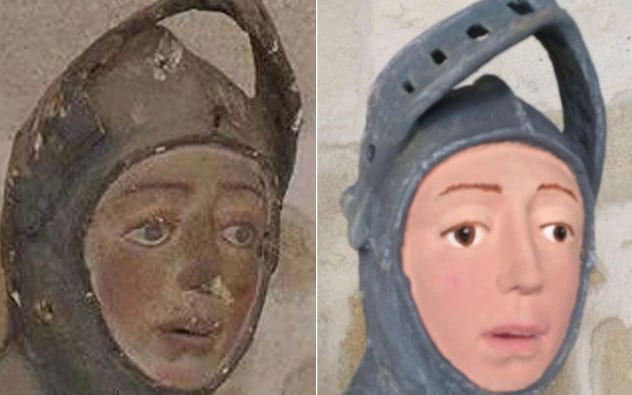 A 500-year-old wooden carving of St. George on horseback had sat for many years in a recess in the back of a church in Estella, Northern Spain. The carving was in good condition, though a little dirty, when the priest of the church of San Miguel de Estella enlisted the help of a local art teacher to restore the relic in 2018.

A workshop was engaged to clean the statue. During the process, the historic relic was also repainted. It would seem, however, that a little more homework had been needed for the project.

A bright new paint job left the 16th-century carving looking more like a Disney character, prompting questions about the amateur restoration of the historic treasure. Authorities investigated whether the carving could be successfully “un-restored.” It was feared that the original intricate paintwork could be lost beneath the layers of modern plaster and paint.[4] 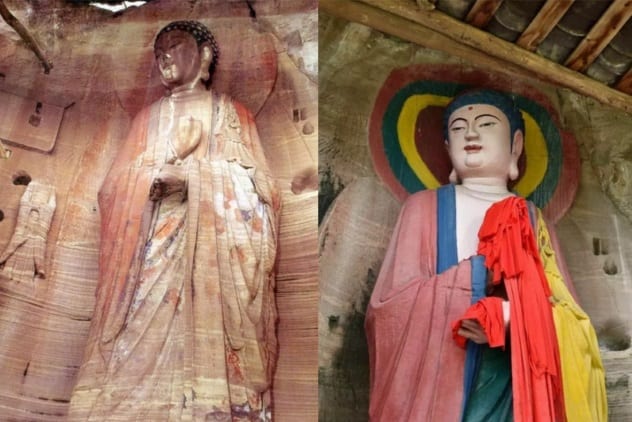 Restoration work on historic Buddha statues in China’s Sichuan province were the subject of scorn when photos were circulated on social media more than 20 years after work was completed.[5]

The Buddhist shrine dating back to the Song dynasty (960–1279) is carved into a mountainside in Anyue township. It is not only a sacred place to local villagers but also a site of important historical and cultural significance. In 1995, local villagers pooled their limited resources to “restore” the ancient artifacts. It seems well-meaning locals often believe they are protecting and caring for the relics by “restoring” them.

It wasn’t until a cultural relics enthusiast visiting the region’s sacred grottoes came to the site that experts became aware of the disastrous restoration. Pictures posted to his social media account in 2018 received harsh criticism. The artifacts had been transformed into cartoon-like statues. The ancient stone relics had received a garish paint job, with some commentators likening Buddha’s halo to a “giant lollipop.” 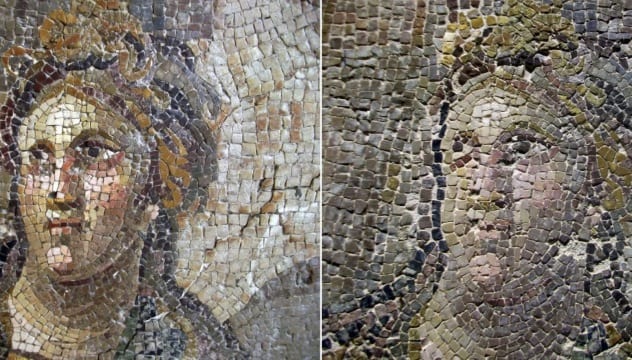 Misplaced tiles and inaccurate colors were said to have changed the appearance of the famous second-century panels. Photos show significant differences in some of the mosaics following the restoration work.[6]

Art experts claimed the mosaics were “caricatures of their former selves” and that valuable artworks were ruined. Restorers argued that the Turkish press had manipulated the images to distort the differences in the “before and after” photos. Turkey’s culture minister suspended restoration work at the museum pending an investigation into the mosaics. 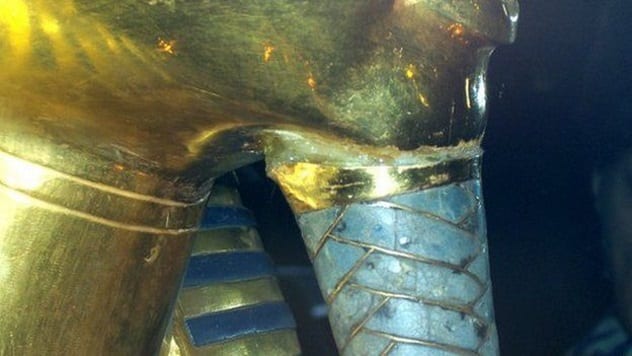 The burial mask of Tutankhamun is one of Cairo’s biggest tourist draws. However, a botched repair job on the 3,000-year-old artifact saw a number of museum staff facing criminal charges in 2016.[7]

The previous year, the blue beard on the mask had become detached for reasons unknown, with a number of attempts to repair the break further damaging the artifact. Large amounts of an inappropriate glue were employed in the repair job. Sharp objects were used in an attempt to scrape off excess glue, scratching the mask. The end result was a very obvious joint where the beard had been stuck on, surrounded by a residue of glue.

A team of German conservation experts were called in to repair the damage, restoring Tutankhamun’s beard before he was returned to public display. 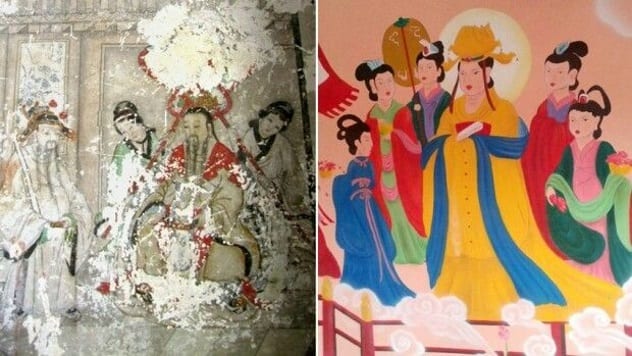 Crumbling Chinese frescoes were left looking more like a cartoon strip following a restoration in 2013. Located in the Yunjie Temple in Chaoyang, the frescoes are believed to date back to 300 years to the Qing dynasty.

The cost of the delicate task of restoring the original murals was beyond the budget of the small temple, so a local company was called in to undertake the repairs more cheaply. The 300-year-old frescoes were simply painted over with new, brightly colored figures from Taoist mythology. The new paintings bore no resemblance to the original murals.[8]

The cartoon-like results prompted online fury at the destruction of these ancient treasures when images began to appear on social media. 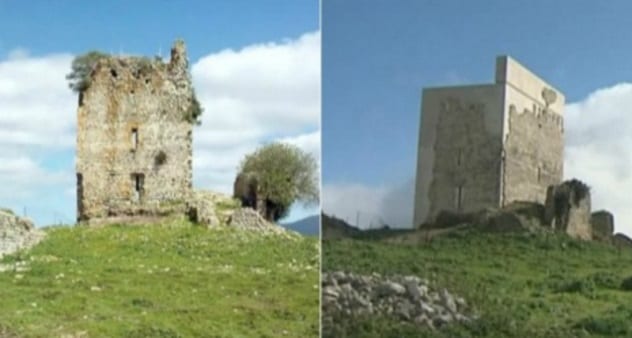 The forces of nature were slowly eroding Castillo de Matrera in Southern Spain to a crumbling ruin. Remaining parts of the heritage-listed castle had begun to collapse. The castle has a rich history dating back to the ninth century and was declared a site of cultural significance by the Spanish government in 1985.

In 2016, Cadiz locals were aghast at the results after the owners of the castle employed architects and builders to restore the site. Restoration work stabilized the remaining structure, while providing an idea of what the original castle may have looked like. However, the combination of the old brickwork with modern materials fell flat with locals, who felt the castle had been ruined.[9]

The project to preserve the ancient ruin ended up winning in the Preservation category of the New York A + Architizer awards. 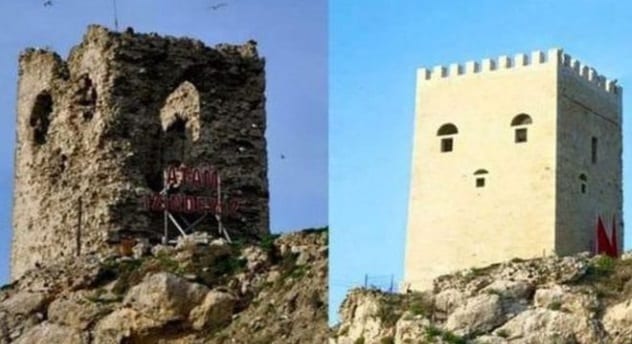 An ancient castle in Turkey was likened to a popular cartoon character when restoration work was unveiled.

Ocakli Ada Castle in Sile is thought to have looked over the Black Sea since Byzantine times. After hundreds of years of neglect, local officials felt it was time to undertake work of preserving the remains of the castle. Restoration work on the castle took several years to complete. Stonework, windows, and battlements were rebuilt, and the structure was stabilized.

However the newly refurbished castle was mocked on social media in 2015. Many commentators noted the window placements unfortunately made the castle look like a depiction of SpongeBob SqaurePants.[10]

1 Statue Of St. Anthony Of Padua 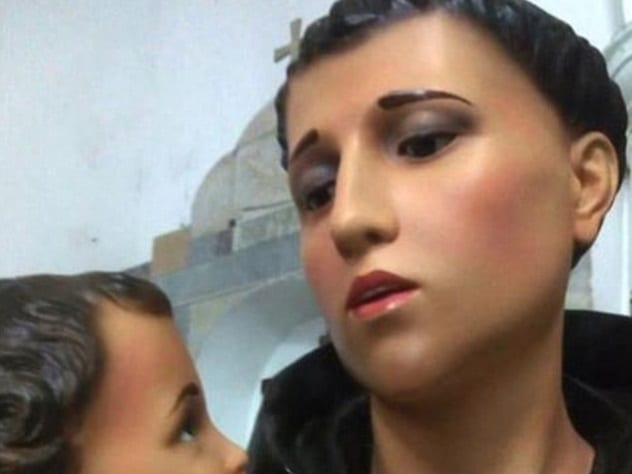 In 2018, parishioners of a Colombian church were outraged when a budget restoration on the statue of their patron saint left him looking like he was wearing makeup.

The wooden 17th-century statue of St. Antonio de Padua in Soledad was sadly in need of repair. The paint on the statue had become quite faded, and termites had begun to eat away at parts of the wood. So an artist was commissioned to repaint the statue at the modest fee of just $328.[11]

Following the paint job, angry churchgoers took to social media to display before and after photos of their patron saint. The end result left both St. Antonio and the child he is carrying wearing garish makeup, not in keeping with religious icons. Locals were outraged that St. Antonio now looked “quite effeminate.”

Restoration experts believed the techniques required to paint the wooden sculpture had not been followed.

Lesley Connor is a retired Australian newspaper editor, providing articles for online publications and her own travel blog.

Read more unfortunate incidents of ruined treasures on 10 Historical Artifacts Ruined By Stupidity And Ignorance and 10 Times Our History Was Destroyed By Accidents And Stupidity.