On April 26, 1986, an explosion occurred at the Chernobyl Nuclear Power Plant in the northern part of Soviet Ukraine, an event which today is widely known as the Chernobyl disaster.

During the evening of April 25, engineers made several fatal mistakes, including disconnecting Reactor No. 4’s emergency safety systems and its power-regulating system. At 1:23 AM, the reactor’s power levels surged, and the events that followed led to an explosion which released more than 50 tons of radioactive material into the atmosphere.[1]

In the days that followed, 32 people died at Chernobyl, and many more suffered radiation burns. Nearly 8.4 million residents of Belarus, Ukraine, and Russia were exposed to the radioactive cloud that was released. The calamity is considered the most disastrous nuclear power plant accident in history, and the area itself is still suffering in its aftermath.

10 Radiation After The Explosion Was Off The Scale 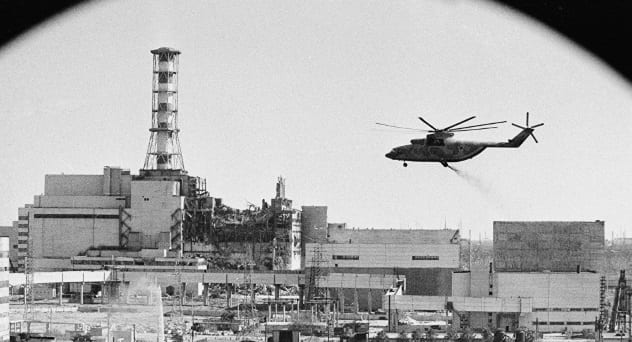 Hours after the explosion, helicopters were flown over Reactor No. 4 to evaluate radiation levels. Experts were unable to make an exact reading, as 200 meters (656 ft) above the reactor, radiation levels had reached 1,500 rems, but the counters were not capable of reading any higher than 500 rems.

In an attempt to contain the disaster, helicopters dumped lead slabs weighing 40 kilograms (88 lb) each on the reactor, followed by several tons of radiation absorbing-sand. However, the operation was flawed, as the scale of the disaster was like nothing ever seen before. Pilot Alexander Petrov, who responded to the scene, recalled, “It took us more than 24 hours to get things going. [ . . . ] At first, our commanders didn’t know what to do. We flew out to see what was happening, then returned and flew back in the morning.”[2] 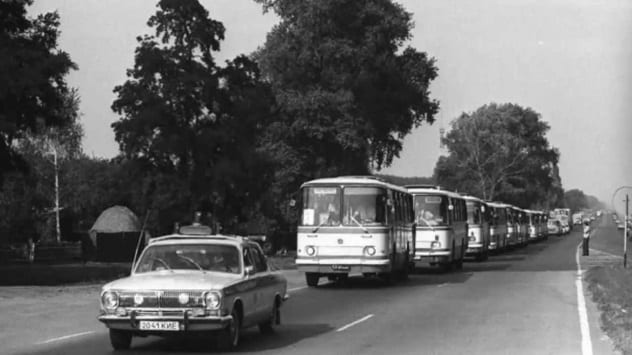 The amount of radiation the Chernobyl disaster released into the atmosphere was 50 million curies—equivalent to around 500 Hiroshima bombs. Police roamed the streets wearing gas masks, but the residents were kept in the dark and only heard rumors. Armen Abagian, who was the director of one of the Moscow nuclear power research institutes at the time, advised the Soviet government to evacuate Pripyat immediately. Abagian recalled, “Children were running in the streets; people were hanging laundered linen out to dry. And the atmosphere was radioactive.”[3]

Residents started to panic when there was a “metallic smell” in the air, and the atmosphere appeared different. It was close to midnight at the end of April 26 when an evacuation was ordered; 1,200 buses and 200 trucks relocated 47,000 residents of Pripyat. The locals thought they would later be returning to their homes, but this was never the case.


8 Contamination Spreads To Other Countries 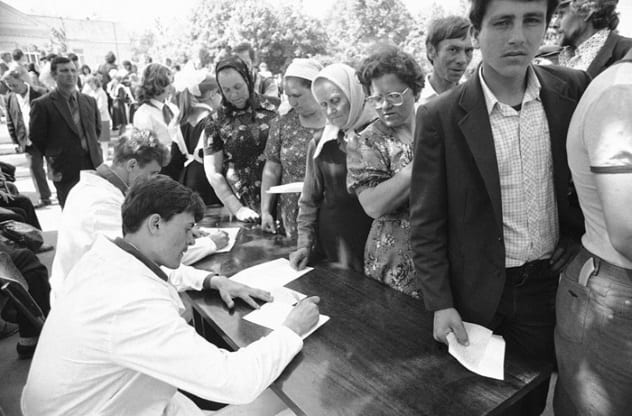 The buses which escorted the residents out of Pripyat spread the radiation to wider areas. It took 3.5 hours to evacuate. One resident recalled, “Queues of jammed buses left the city. One after the other, like giant beetles, kilometre after kilometre. The traffic was insane. Only a Second World War survivor can imagine a similar scene.”[4]

Just days after the initial disaster, the wind changed direction and began blowing high levels of radiation in the direction of the Ukrainian capital, Kiev. The city held its annual May Day parades as the government assured citizens everything was normal. Finally, 11 days after the disaster, officials warned the residents of Kiev that they should avoid eating leafy vegetables and to stay indoors.

Later in May, the Russian first deputy health minister also issued a warning that vodka and red wine were not a cure for radiation exposure—despite popular belief. More than 500,000 residents in Ukraine were ultimately forced to leave their homes.

7 Military Reserves Made Their Own Protective Clothing 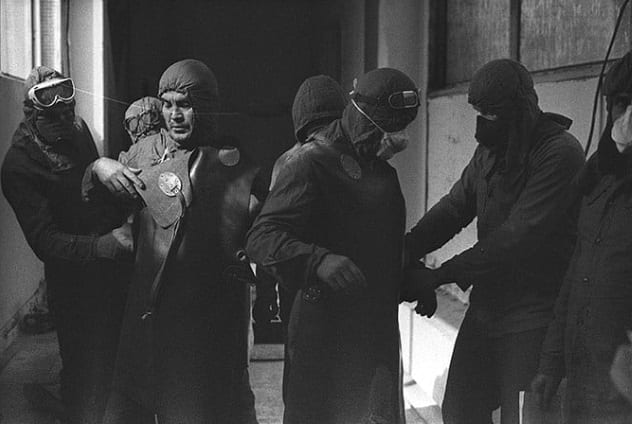 More than 600,000 civil and military personnel have been given the honorary status of “Chernobyl liquidators” since the cleanup began in 1986. Originally, robots from West Germany, Japan, and Russia were used to help clean the debris, but they could not operate due to the high levels of radiation. Instead, the job was handed over to humans, who could not be exposed for any longer than 40 seconds.

Most of the liquidators were military reserves, and the army did not have enough uniforms suitable for working in radioactive conditions. Instead, reserves made their own protective clothing using lead sheets up to 4 millimeters thick as aprons to help protect the spine and bone marrow. Photographer Igor Kostin recalled, “The clever ones also added a vine leaf for extra comfort.”[5]

Many of the liquidators have since suffered from severe health problems—some of which were fatal. 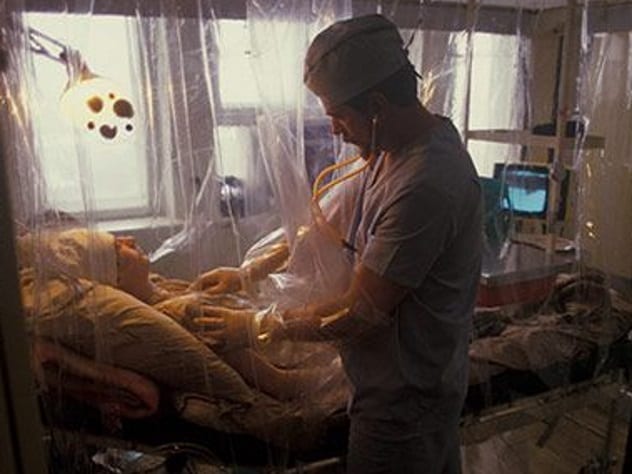 Dr. Robert Peter Gale, known as “the Chernobyl Doctor,” was one of the many physicians and scientists brought in from 15 nations to help with the aftermath of the disaster. Dr. Gale treated patients who had suffered such a high exposure to radiation that even a bone marrow transplant could not save them. Without functioning bone marrow in the body, a patient will usually die within four weeks. It was also difficult to assess how much radiation patients had been exposed to, as the gradual loss of hair and some darkening of the skin were the only visible signs.

In 1986, Dr. Gale and the director of the Soviet Union’s Central Institute for Advanced Medical Studies signed an agreement to monitor the 100,000 people who were residents in the “danger zone”—a 30-kilometer (18.7 mi) radius surrounding the site which ultimately became the Chernobyl Exclusion Zone. He said, “A physician deals with life and death every day. Yet, with us, death is a biological event. We don’t think of our own death. The events of Chernobyl made me focus on my own mortality—on all our mortality. Unfortunately, it takes these tragic events to impress this on us.”[6] 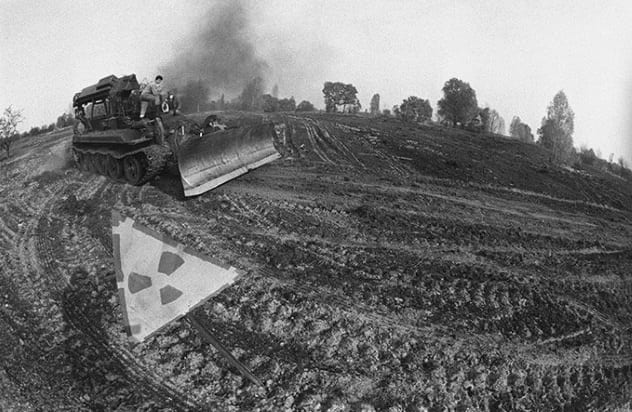 The village of Kopachi lies 7 kilometers (4.3 mi) from the site of the Chernobyl disaster. This is an eerie and deserted location, as the homes of Kopachi were completely bulldozed and buried by the Soviet Army. However, this plan only did more harm than good.

Chernobyl guide Yuri Tatarchuk explained, “Kopachi was very badly contaminated and so it was decided to bury it, house by house. It seemed a good idea at the time, but it wasn’t. The digging only pushed radioactive material deeper into the soil and closer to the water table, so that contamination spread even further.”

Today, only two buildings are left standing, one of which is the former kindergarten, where children were not evacuated until 36 hours of exposure. Tatarchuk said of the aftermath, “It was criminal. [ . . . ] At least 5,000 people were badly affected at the time, while women who were pregnant were simply told to have abortions. It was a cruel time.”[7] 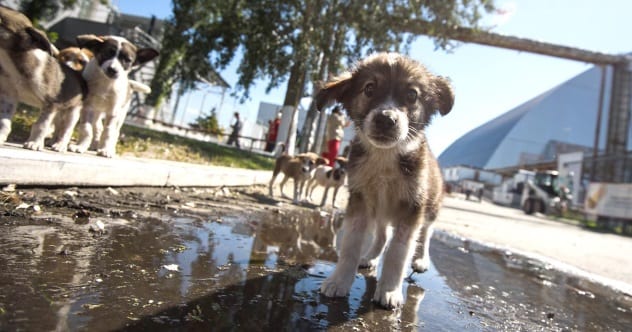 There is a myth that no life can survive in Chernobyl, which is simply not true. It’s estimated that more than 900 stray dogs live in the Exclusion Zone. Many can be found playing inside the abandoned cooling tower at the former power plant. The puppies are believed to be descendants of the pet dogs that were left behind by their owners; residents were granted only a few hours’ notice before they were evacuated and advised to only take vital personal belongings and a certain amount of food.

The dogs have been driven out of the woods by the wild wolves that habitat the area. Now, volunteers, including veterinarians and radiation experts, have formed the nonprofit charity Dogs of Chernobyl. The dogs are tagged and their radiation exposure studied. They are also used for research on diseases including rabies. Some dogs have been fitted with radiation sensors and GPS receivers, which help to map the radiation levels across the exclusion zone.[8]

3 Birth Defects Among The Children Of Chernobyl 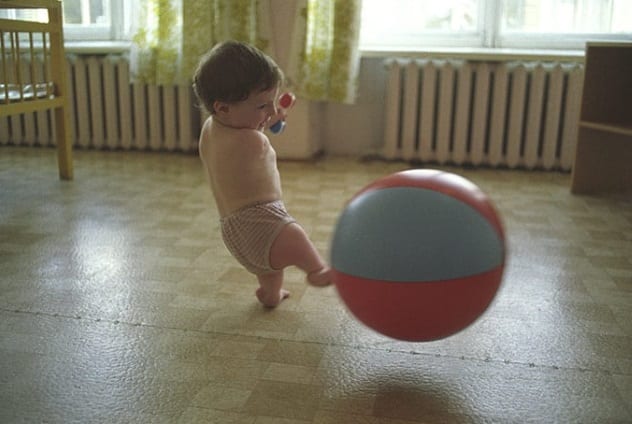 Following the disaster, citizens in the city of Kiev were advised by authorities to take regular warm showers, keep their windows closed, and regularly wash their furniture. The precautions were not enough, as, since 1986, physicians have reported a rise in birth defects. Belarus shares a border with Ukraine, and the Chernobyl Nuclear Power Plant is quite close to said border; in 2010, UNICEF reported that 20 percent of adolescents in Belarus suffer from chronic illnesses or disabilities caused by birth defects.

There are many charities that support facilities which help babies who were born with severe birth defects, including neurological difficulties and heart conditions. Another common birth defect in this region is microcephaly, in which a baby’s head is smaller and not in proportion with the rest of their body.

In 2014, Michael Donnelly, chairman of Chernobyl Children’s Appeal, said, “These children are forced to suffer through no fault of their own. [ . . . ] It’s no better now than it was 28 years ago. The level of radiation in the Chernobyl zone is still the same today as it was in 1986.”[9] 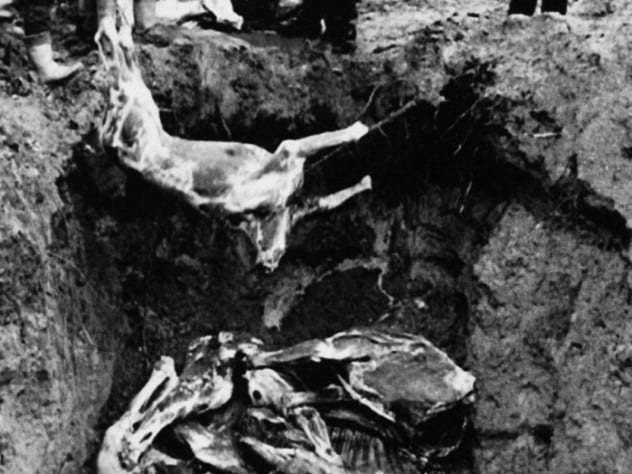 Months after the Chernobyl disaster, the radioactivity had spread to Galsjo Forest in Sweden. Elk were contaminated, and the moment their bodies were thrown in a quarry after being stripped of their heads and fur was captured on camera.

A 10-square-kilometer (4 mi2) area of forest that surrounds the Chernobyl Nuclear Power Plant has become known as the “Red Forest” after the contamination caused the trees to die and their leaves to turn a deep red color. After the humans evacuated, wildlife grew rapidly with limited predators to hunt them down—wild boar multiplied eightfold in the two years following the disaster. Radioecologist Sergey Gaschak explained, “Animals don’t seem to sense radiation and will occupy an area regardless of the radiation condition.”[10]

The Red Forest is now one of the most contaminated sites in the world, with more than 90 percent of the radioactivity found in the soil. Mice embryos used for research have dissolved in the conditions, and horses left that lived within 6 kilometers (3.7 mi) of the power plant died due to their thyroid glands disintegrating. 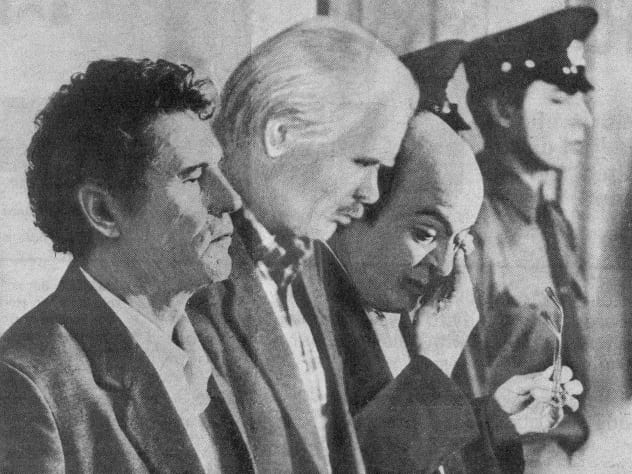 In July 1987, Chernobyl’s plant director Viktor P. Bryukhanov, chief engineer Nikolai M. Fomin, and deputy Anatoly S. Dyatlov were sentenced to two to ten years at a labor camp.[11] They were found guilty of gross violation of safety regulations which led to an explosion. Judge Raimond Brize declared in the courtroom, “There was an atmosphere of lack of control and lack of responsibility at the plant.” The plant officials were also heavily criticized for not evacuating the town of Pripyat sooner.

Nowadays, an old sarcophagus covers the damaged fourth reactor at the nuclear power plant, and the New Safe Confinement (NSC) structure sits above that. Although it has been more than three decades since the Chernobyl disaster, there are many still suffering the consequences today.