Forget Mars. Swim deep enough, and you are on a different planet. Deep below, there are things older than dinosaurs and forests from ancient lands.

While that makes for a great view, divers also face life-threatening situations like toxic streams and whales in a manhandling mood. Then there are the heroes who risk themselves by saving everything from the world’s biggest fish to one of its most venomous.

When diver Emeric Benhalassa recently visited a diving site near Bali, he filmed a cute blob. The creature looked alien, but scientists have known about them for a while. Even their name is adorable—the nudibranch.

These hand-sized creatures are sea slugs. Ranging in colors from green to yellow-brown, they have long bodies with leglike appendages and balloons for heads. This particular species, Melibe viridis, was a common type of nudibranch. What made the footage special was that it captured the creature’s rarely seen feeding behavior.

The nudibranch has a unique technique to compensate for its weak eyesight. It uses its head like a net, throwing it widely over the seafloor. Rows of sensors run along the edge. When they detect a small crab or snail, the gelatinous head snaps shut and traps the prey.[1] 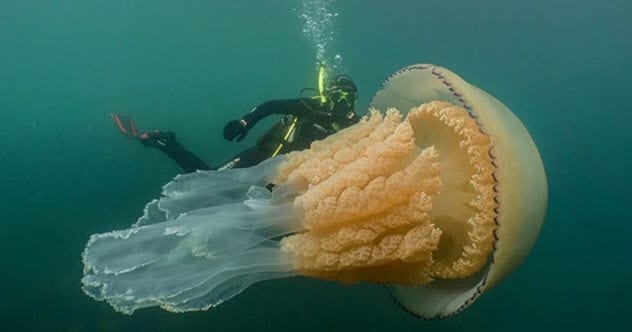 Biologist Lizzie Daly went swimming off the coast of Cornwall in the United Kingdom. Luckily for those who love enormous blobs of jelly, Dan Abbott went along. The underwater cinematographer filmed her encounter with a rare creature.

While diving near the southwestern tip of England, the pair noticed a giant jellyfish emerge from the dark water. It was a barrel jellyfish (Rhizostoma pulmo), a rare species that is also known as the dustbin-lid jellyfish.

That is regrettably what its “head” looks like. The large dome trails eight thick arms and tentacles capable of stinging. As the United Kingdom’s biggest jellies, the human-sized creatures are mostly known from specimens that beach themselves. For divers to encounter a living barrel jellyfish just pulsing its way through the ocean is rare.[2] 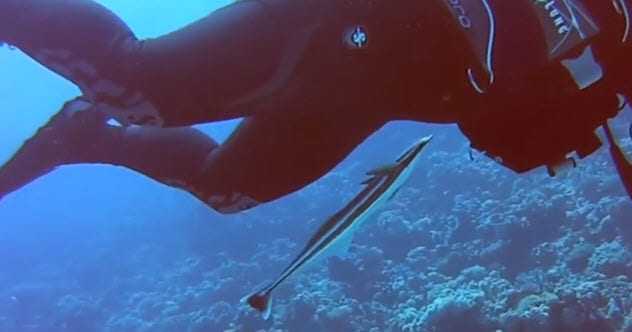 Two divers explored a coral reef off the coast of Egypt when one noticed that they had gained a companion. It was a remora (aka a suckerfish). These critters have an organ like a suction cup on their heads, which they use to attach themselves to larger hosts. Remoras then feast on the crumbs of whatever the host kills in a messy fashion.

For this reason, they prefer to latch onto sharks. This particular remora was trying to grasp one of the divers. The incident was caught on film and released in 2017. It showed the fish swimming around the man, pecking at the diving suit and doggedly following the diver when he continued to explore the reef.

Ranging from 0.3 to 0.9 meters (1–3 ft) long, remoras seem to have a penchant for confusing divers for sharks. Enric Sala, a marine biologist, has seen several cases. While diving near the Southern Line Islands in 2009, he was pursued by a remora himself.[3] 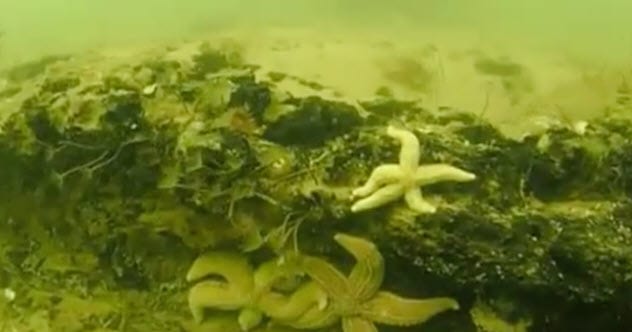 Divers have found ancient tree stumps underwater before. However, nothing came close to the discovery of a British diver who explored the sea off the coast of Norfolk.

In 2015, Dawn Watson was pushed off course by rough water and ended up in a place where the seafloor was littered with large oak trees. It turned out to be a 10,000-year-old forest.

The age factor was not the only special thing about the discovery. The prehistoric forest covered the thousands of acres that once linked continental Europe with Great Britain. This landmass was called Doggerland, and artifacts brought up by fishermen suggest that it was populated by Mesolithic hunter-gatherers.

Around 10,000 years ago, the forest was at its peak performance, providing ample hunting opportunities for people and animals alike. These days, the oak trees entertain a different kind of client. Several species of marine life now inhabit the forest as a reef.[4]

Porcupinefish are often confused for pufferfish. It is not hard to see why. Just like pufferfish, porcupinefish balloon to comical proportions to avoid being swallowed by a predator. They also have long spikes all over their bodies and the deadly toxin tetrodotoxin in certain organs. Around 1,200 times more lethal than cyanide, the poison also laces their skin.

For obvious reasons, few would handle a live porcupinefish barehanded. In recent years, YouTuber Kye Bolen uploaded a video showing a diver doing just that. The man encountered a porcupinefish with a large hook in its mouth.

He took hold of the fish, careful not to spook it. The creature stayed remarkably calm and did not inflate. That would have been unfortunate as the spikes would have risen and endangered the diver.

The man gently wiggled the hook. But near the end, it took a few rough tugs—and the porcupinefish puffed up. Undeterred, the diver held the fish by the head to avoid the spikes and managed to remove the hook.[5] 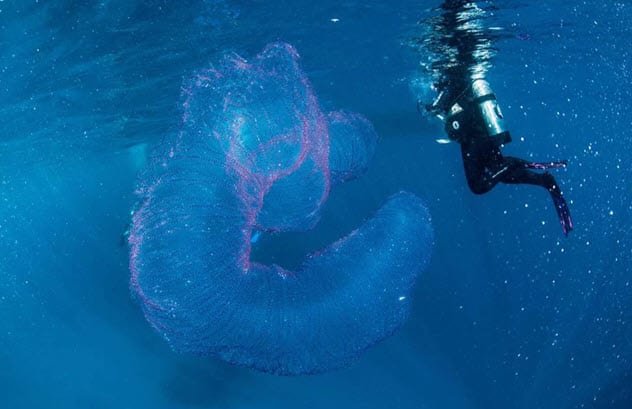 In 2017, a scuba diver found something weird near the coast of Australia. It looked like some kind of creature. The thing was tube-shaped, translucent, and huge. Best of all, it glowed.

The fringe theorists quickly speculated about mystery beasts, but biologists begged to differ. The tube was not a creature but the nest of a squid lined with strings of eggs. The latter were pink with a pearl-like appearance.

Identifying the parent of a squid clutch is surprisingly hard. Nothing is definite, but scientists believe that the tube was produced by the mysterious diamond squid (Thysanoteuthis rhombus).

These large kite-shaped creatures live with their mates for their entire lives, which is roughly a year. The glow of the tube comes directly from the eggs. Nobody knows how they shimmer, although a clue was found in diamond squid larvae. A previous study hatched diamond eggs and found that the babies had pigment cells for both red and yellow.[6] 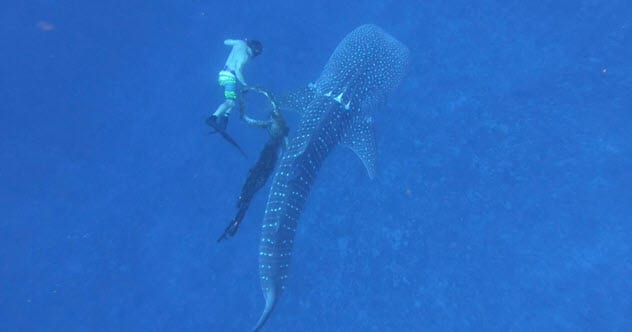 In 2018, Hawaii’s Department of Land and Natural Resources was alerted by scuba divers that a whale shark was in trouble. This was no light matter. Not only are whale sharks the largest fish on the planet, but the gentle beasts are also endangered. The divers reported that the animal was entangled in a rope, but they failed to help it.

Later that year, a free-diving Hawaiian family enjoyed the sea near the island of Lanai. Despite years of free-diving, they had never seen a whale shark and were delighted when they found a young female some distance below.

It did not take long for them to realize that the shark had serious injuries. A heavy rope had cut deeply into a pectoral fin and rubbed scars into her back.

To free the shark, the father performed a series of two-minute dives to a depth of up to 18 meters (60 ft). The animal’s calmness was remarkable. Normally, whale sharks swim away when touched, but she allowed the man to saw at the rope for over half an hour until she was free.[7]

3 Whale Roughing Up A Diver 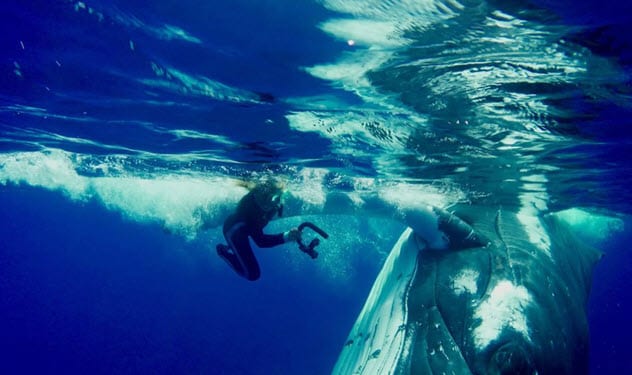 Humpback whales are often depicted as gentle giants. Marine biologist Nan Hauser, who had 28 years of experience diving with whales, could not really disagree—until 2018.

While diving with her team off the Cook Islands, an enormous humpback approached Hauser. The 22,700-kilogram (50,000 lb) mammal got a little rough. It seemed to insist on putting Hauser on its head or tucked away under a giant pectoral fin.

For more than 10 minutes, the biologist kept calm. The whale’s movements were not brutal, but their size difference made it a potentially deadly encounter. At one point, it even lifted her out of the water.

Back on the boat, Hauser realized that the situation was not as simple as running into a mean-tempered whale. On the other side of the humpback lurked a 4.6-meter-long (15 ft) tiger shark. There was also a second humpback swatting the water near the predator.

Humpbacks have been recorded saving seals and the calves of other whale species from orcas. If this was a similar behavior, it would be the first known case where the giants protected a human from danger.[8]


2 A Creature Older Than The Dinosaurs

There exists a remarkable creature deep in the sea. The bluntnose sixgill is a large shark that trawled the ocean before most dinosaurs existed. The 200-million-year-old species likely survived Earth’s biggest extinction event, the Permian-Triassic die-off, from which only 4 percent of all sea life escaped.

It saw the evolution and extinction of the famous monster shark megalodon. The sixgill is still here. Naturally, researchers would love to study this ancient creature, but their deep habitat is a challenge.

In 2019, scientists dared the depths with a submersible. They hit the jackpot in the Bahamas. When the submersible reached 990 meters (3,250 ft), a massive sixgill approached. The female, measuring 4.9 meters (16 ft) long, seemed curious about the divers. She batted her huge blue eyes at the researchers and gently nosed the vessel.

However, her power exploded when she tore into the bait offered outside the submersible and rattled everyone inside. She was too close to tag. But later that night, the scientists found a male sixgill and he became the first animal shot with a tracker tag from a submarine.[9]

The Cenote Angelita is a sinkhole in Mexico’s Yucatan Peninsula. From above, it looks like a normal freshwater pool. However, divers who descend about 30 meters (100 ft) meet with an incredible sight—an underwater river. An eerie mist hangs around it, wrapping the river in a swathe at least 3 meters (10 ft) thick.

Some divers who dare to go into the mist often panic. The cloud is pure hydrogen sulfide and makes for an extremely disorienting swim. The gas is fatal to inhale. This is not the most comforting substance to feel lost in.

The river is actually something called the halocline. Cenotes have both seawater and fresh water. The river forms when they meet and cannot fully mix due to density differences.

The parts that do merge formed the halocline river, a brackish stream underneath fresh water but above salt water. As the river is thick enough to prevent forest litter from sinking past it, the decomposition produces the hydrogen sulfide that stays with the stream.[10]

For more amazing underwater discoveries, check out 10 Amazing Discoveries From Beneath The Sea and Top 10 Unbelievable Things Found Underwater.