All biology teachers at some point have to warn their students not to anthropomorphize nature, in other words, not to suggest the natural world behaves like humans. Cells, viruses, and bacteria do not “want” anything. They act under the rules of stimulus and response. Even animals, including humans, mostly follow biological imperatives.

But sometimes, just sometimes, when you look at another species, it is impossible not impute human motives to nonhumans. Since many people seem incapable of romance, it may be a surprise that some animals are. Here are ten animal species which you might not expect to have a soppy side. 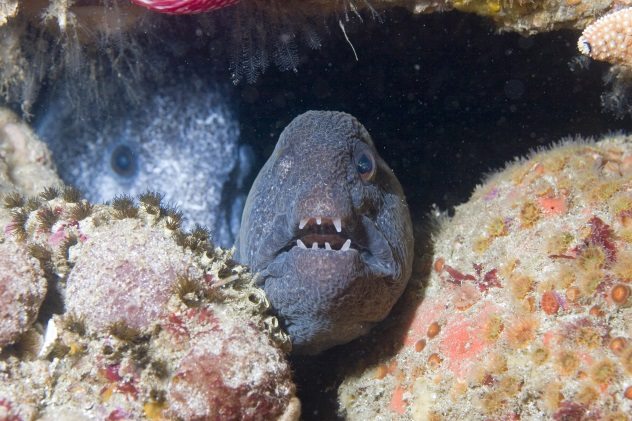 If you ever think you’re too ugly to find a mate, then take heart from the love life of the wolf eel. With gray, pebbled skin covering a fat head, they are sometimes called the “old men of the sea.” Growing up to 2.4 meters (8 ft) long, they can appear quite menacing as they continually sway to stay afloat. In fact, they are rather gentle creatures that swim toward inquisitive divers. It is their behavior toward each other, though, which makes them particularly sweet.

While poorly studied in the wild, the romantic side of the wolf eel has been observed in aquariums. Here, they are seen to form mating pairs at around four years old, though they will generally produce their first clutch of eggs three years after that.[1] The mates set up home in a single crevice in rock. When the pair breed, they produce hundreds of yellow eggs. Both male and female take their turns to guard their babies while the other goes out to feed. In aquariums, this partnership can last the length of the fishes’ lives, up to 28 years.

Albatrosses are among the most well-traveled creatures on the planet. Their huge wings can carry them over thousands of miles, even circling the Earth, as they search out food. Despite the distances traveled, most albatrosses will return to the island where they were born to breed. Even when too young to breed, an albatross will return to its island home and practice its complex mating rituals with other albatrosses. Over time, these practice sessions will dwindle until a match is made with just one other albatross. Once mated, this pairing will last the rest of their lives.

Albatrosses mate for life because there is so much riding on the success of their mating. They breed slowly and only lay a single egg at a time. By having a pair of adults dedicated to each chick, they increase the chances of their young surviving to adulthood. What makes the albatrosses’ dedication to their partners all the more remarkable is that their unions can last for decades despite the pair spending months apart each year while gliding over the waves of the ocean, only reconnecting on their island.[2] 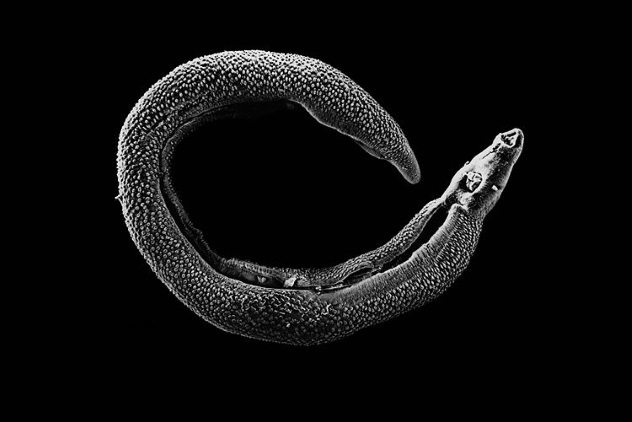 Even the most romantic-sounding animals can still suffer heartache. Despite their enchanting name, recent evidence has come to light that blood flukes do not, as previously thought, mate for life. This shocking turn of events calls for a look at how blood flukes tricked researchers for so long.

The love life of the blood fluke seems as if it should give little room for a couple to break up. Blood flukes, parasites which cause deadly schistosomiasis in humans, were thought to enter into a lifelong embrace. When a male fluke meets a female, the two mate. To do this, the larger male enfolds the female into what is charmingly known as the gynacophoric canal. The female will, in most cases, spend the rest of her life inside this pouch. When the male sucks the host’s blood, he will pass it down to the female hidden inside. These tightly bound fluke couples will produce thousands of eggs.

It is easy to see why scientists thought this was a lifelong partnership. However, it turns out that if there are many more male flukes than female ones, then a bonded female will leave her home, and partner, to breed with others.[3] As the saying goes, the grass is always greener in the other gynacophoric canal.

Unlike the blood fluke, the anglerfish does mate for life. This is because the male anglerfish gives the female no choice in the matter. When anglerfish females are ready to mate, they release chemicals which signal their readiness for any males in the area. The male anglerfish is much, much smaller than the female, but he has the largest nostrils compared to his head size of any in nature.[4] This is so he does not miss any opportunity to mate. Approaching someone so many times your size could seem dangerous, so the male doesn’t attempt to impress the female with his willingness to exchange DNA. He simply swims up to her and bites.

The anglerfish love bite is one of the most brutal in nature. Once he has bitten onto the female, the male will dissolve his jaws as the flesh of the two creatures fuses together. The male is now what is known as a sexual parasite. Over time, the male’s eyes and fins waste away. His body is fed from the female’s blood and produces sperm in return. It’s hard to think of a couple with a closer relationship than that.

What is romance without some public displays of affection? For the bowerbirds of New Guinea and Australia, mating is all about showing their partner a good time. In most species of bowerbird, the male is much more colorful than the female, and his stylish plumage will be put to good use when the mating season begins.

The bowerbirds get their name from the structures males build to impress females. These bowers are collections of twigs and leaves where a male can display himself to females. Around his structure, he places colorful objects. Berries, shells, and leaves are traditionally used as decoration, but human products will also be incorporated if the bird comes across them.[5] Female bowerbirds may visit several bowers before choosing the male that has done the best construction job and does the best mating dance.

Once the mating is done, most female bowerbirds will build the nest and raise the chicks alone. Romantic display is not always a guarantee of a happy marriage. 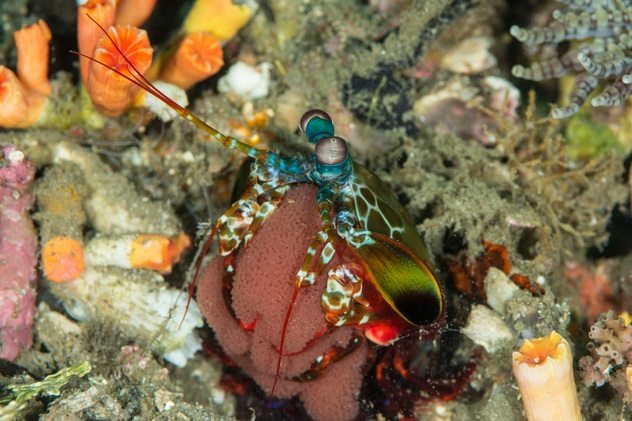 Mantis shrimp are fascinating creatures. Some are predators with a punch so hard that it can create enormous temperatures and even light. They use these punches to stun and kill prey. They also have eyes which can see far more colors than humans are able to. The males tend to be more colorful, presumably to please their females, who, with their huge eyes, are able to appreciate such displays.

Unusually for invertebrates, the peacock mantis shrimp is generally monogamous. Once the female has chosen her mate based on his flashy carapace, she will accept the package of sperm that he passes to her. She then releases her eggs, and they are fertilized by the sperm.[6] She then takes the eggs back to her burrow, where she will guard them, clean them, and make sure they receive oxygenated water. The father has limited involvement, and the mother will not eat until after the eggs have hatched. Despite this dereliction of duty, the pair will remain together. 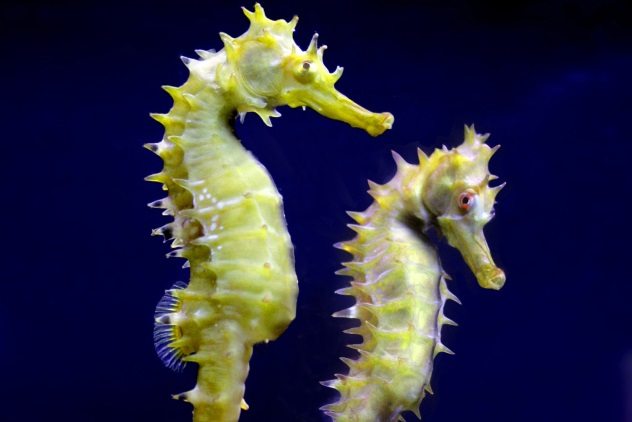 In the animal world, there are few fathers as involved in their offspring’s development as the seahorse. Before a male and female seahorse mate, they spend up to several days dancing around each other. This may be to assess each other’s fitness for breeding, though the fact that seahorses have been seen to have a surprisingly high rate of same-sex mating may mean that it serves another purpose. Once a male and female do match up, though, their mating takes a strange turn.

The seahorses line up, and the female uses an organ called an ovipositor to place her eggs inside a pouch on the male’s belly.[7] In each mating, up to 1,500 eggs can be transferred. The male seahorse then incubates the eggs until they hatch. As soon as they leave their eggs, the tiny seahorses are self-sufficient. The male expels them from the pouch and immediately looks for another seahorse to dance and mate with. 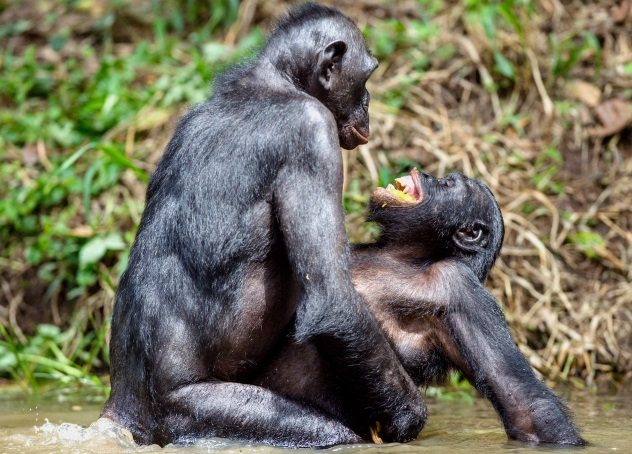 Humans in relationships can find that the passion for their partner falls away, and sex becomes a distant memory. Bonobos are one of humanity’s closest living relatives—we share 98.6 percent of our DNA with them—but they do not suffer this problem.[8] Unlike prudish humans, the bonobos have brought sex out of the bedroom and make use of it in situations that would never occur to us.

Female bonobos have a dominant place in their society, and they use sexual acts to ease social interactions. When bonobo females encounter a high-stress situation, they will engage in genital touching to reassure those around them of their place in the hierarchy. While two rival bands of chimps will often fight each other if they come into contact, bonobos will defuse the tension by performing an impressive array of sexual acts on each other. Make love, not war. 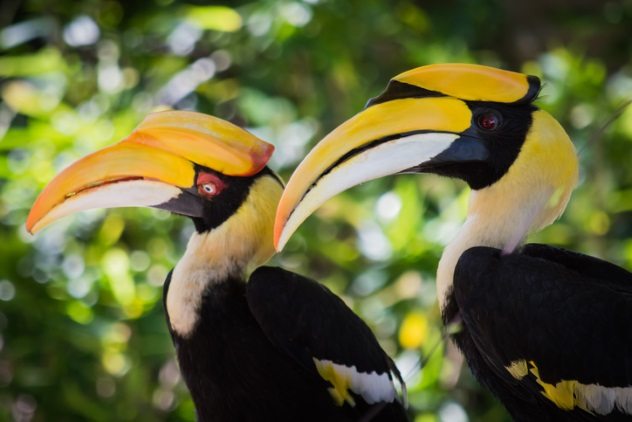 Before choosing a mate, female hornbills will watch males headbutt each other until one wins her approval. Once this display of male bravado is over, the pair of lovebirds set up a nest, usually looking for a hollow high in a tree. The two birds mate, and the female begins her unique form of interior decoration. Using her own feces, and those of her partner, she will erect a wall that seals her inside.[9] Behind this poop wall, the female lays her eggs and incubates them. There is a small gap in the wall through which the male delivers food.

For five weeks after the eggs hatch, the female remains walled up with her babies, dependent on her partner for food. She then leaves, but the children are not ready to flee the nest yet, so they put the wall back up using their own feces. Only after a further two weeks of being fed by their parents through the wall of feces will the family home be broken up.

When divers off the coast of Japan discovered complex patterns in the sand of the seabed, they had no idea who or what had created them. A decade later, the builders of these geometric sandy designs were revealed to be the humble pufferfish.[10] The male pufferfish is only around 13 centimeters (5 in) long, yet he will build a sand structure up to 2.1 meters (7 ft) across. And he does all this to attract a mate.

Male pufferfish make the structures by flapping their tiny fins against the sand and nudging the floor with their noses. To further decorate the structure, the male will pick up shells and lay them on the ridges. Because the site is made of sand, the male pufferfish has to constantly repair it as the tide threatens to destroy it. All the effort pays off when he wins himself the attention of a mate. No one knows what it is about the display which attracts the female, but it certainly shows that sometimes, you have to put the effort in.