The most common piece of advice ever given might be to just be yourself, to remain true to yourself despite the opinions and judgments of others. Social norms and expectations of how people should behave have led to anxiety in many individuals who feel the need to fit in. However, one country has always stood out in the crowd.

Russia has become famous for its unusual people, events, and traditions. Even when alcohol isn’t involved, the people of Russia seem more willing to step outside the norms of society than most other cultures. And as a result, their country is full of weird and surprising stories—here are only a few examples. 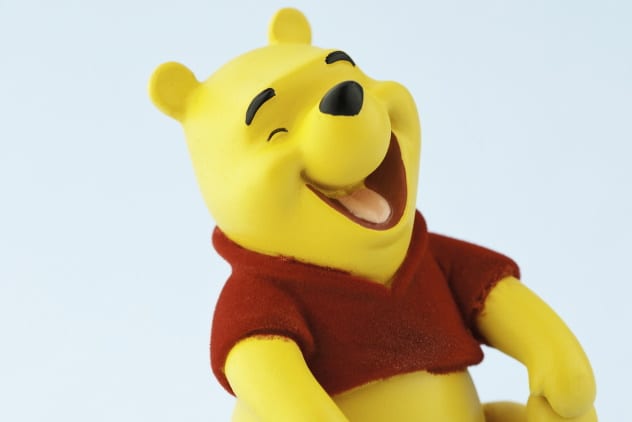 Russia has its own version of Winnie-the-Pooh, which has been a beloved cartoon character for decades. Whenever someone wanders around Central Moscow, they have a good chance of encountering people dressed up as Russian icons and cartoon heroes.

In 2017, one tourist visiting Moscow from Ulyanovsk ran into a group of such costumed characters and jumped at the chance to take some group photos. However, the pictures were not available for free. She paid 5,000 rubles (around $79) to a man dressed as Winnie-the-Pooh. The man promised to return with smaller bills and give her the change, but he never came back.[1] 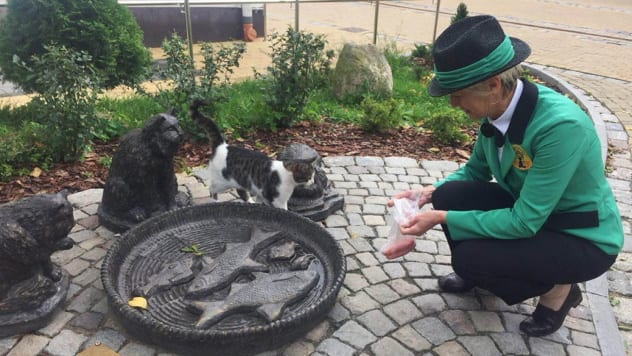 Around 80 applicants responded to an unusual job advert searching for a cat chief in Zelenogradsk in 2018. The job description stated that the worker has to take care of the town’s approximately 70 stray cats. The small town in the Kaliningrad region had also erected a cat statue and added a feline to its emblem to rebrand itself as Russia’s foremost cat-loving community.

Local resident Svetlana Logunova was ultimately appointed as guardian of the town’s felines. She was given a budget of 5,700 rubles (roughly $90) per month to ensure that all the community’s cats are happy, petted, and fed. Logunova was also given a bicycle and uniform, including a bright green jacket, black bow tie, and hat. She was to provide the cats with free rides in the bike’s basket.

“I alone cannot care for every single one and a helping hand would go a long way,” Logunova said.[2] 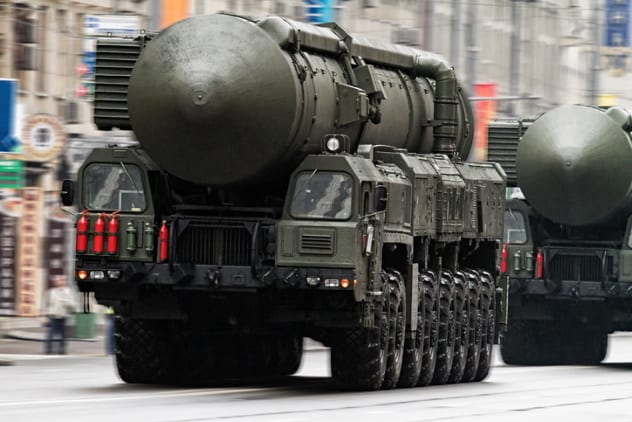 A committee on ecclesial law met in Moscow during June 2019 and recommended ending the practice of blessing missiles and warheads. They suggested that priests should instead bless only individual soldiers and their personal weapons. Blessing nuclear weapons is an ongoing Russian tradition, seen as a way of spiritually protecting the country. Bishop Savva Tutunov of the Moscow Patriarchate suggested ending this tradition:

One can talk about the blessing of a warrior on military duty in defense of the fatherland. At the end of the corresponding ritual, the personal weapon is also blessed—precisely because it is connected to the individual person who is receiving the blessing. By the same reasoning, weapons of mass destruction should not be sanctified.

But Tutunov’s view is not universally held in the Orthodox Church. Vsevolod Chaplin, a former spokesman for the Patriarch of Moscow, likened Russia’s nuclear arsenal to “guardian angels” of the country, needed to protect Orthodoxy.[3] Religion News Service has quoted Chaplin once saying: “Only nuclear weapons protect Russia from enslavement by the West.”

There is another reason why the initiative to stop blessing nuclear weapons faces strong opposition among members of the clergy—Saint Seraphim. Reportedly, St. Seraphim’s remains were discovered in a Russian town housing several nuclear facilities. He is now the patron saint of Russia’s nuclear weapons and an important religious figure.

7 Cops Put Out Fire With Snowballs 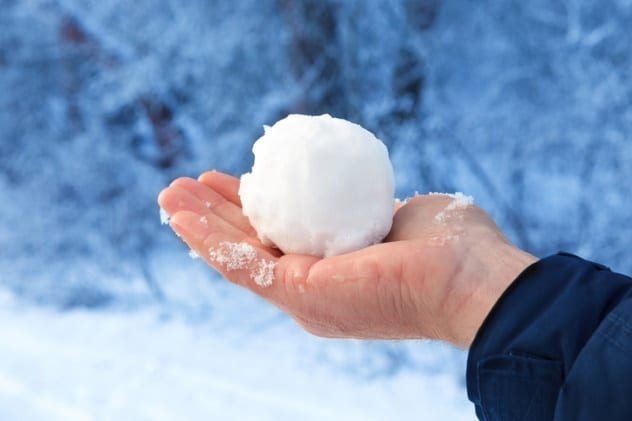 Two police officers in the Siberian region of Krasnoyarsk were commended for averting a tragedy by rushing to help put out a fire with snowballs in November 2018. Lieutenant Yevgeny Lunin and Lieutenant Pavel Istomin noticed heavy smoke rising out of a garage next to a house while on patrol in the village of Kuragino. They alerted the fire department and helped residents to evacuate before the flames spread.

The fire started when a car parked in the garage short-circuited. The Krasnoyarsk regional branch of the Interior Ministry said, “The guardians of law and order continued to hurl snow at the burning fence and garage gates before firefighters arrived.” The statement also added that the police officers will be awarded for helping to prevent a tragedy.[4] 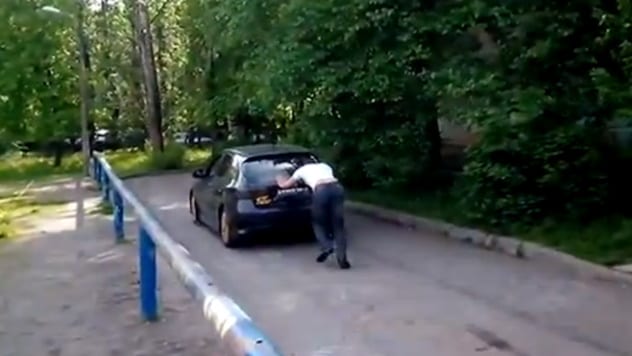 In 2014, police noticed the “strange behavior” of a man sitting in a car parked in front of a Kemerovo region cafe. When asked to identify himself, the man had no formal documents—no driver’s license and no registration for the vehicle he was sitting in. He also exhibited signs of intoxication, according to the police statement.

Police took the suspicious man to the local precinct, where another local resident soon appeared to report that his car had been stolen. It didn’t take long for the police to determine that the drunk, unidentified man had drilled a hole into the ceiling of the other man’s garage and stolen his vehicle.

However, the drunken thief had to push the stolen car 1 kilometer (0.6 mi) down the road when he realized that he did not know how to drive. The thief, whose identity was not disclosed, faced up to six years in prison.[5]

Fox on the Subway!

A video of a woman riding the Moscow subway with a pet fox nonchalantly perched on her shoulder went viral on Russian social media in late 2018. Commuters on the busy platform gave the fox strange looks as they waited for the train.

Because the fox did not seem concerned about either the other subway riders or the arriving train, it might not have been the animal’s first train ride. When the doors opened, the woman stepped inside while keeping her back straight so as to not affect the fox’s balance.

Although some social media users were worried about rabies and accused the owner of putting other passengers at risk by not muzzling the animal, most of the commenters found the video hilarious. A few even commended the woman for wearing real fur without harming any animals. “When you want a fur coat but you love animals,” joked one Twitter user.

Despite being a fairly bizarre sight, pet foxes are not that unusual in Russia. Geneticist Dmitry K. Belyaev started a breeding program to domesticate the animals in the 1950s, and a small population of domesticated red foxes still exists today.[6] 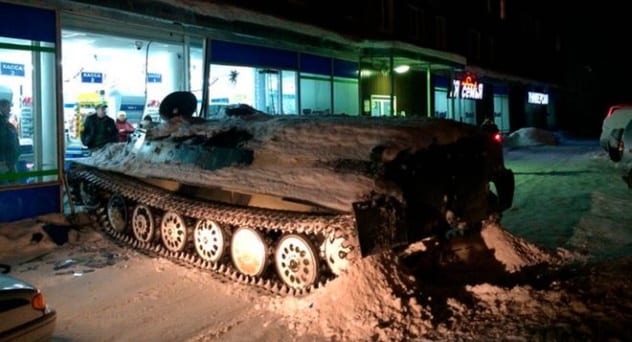 At the start of 2018, a Russian man was arrested after he stole an armored vehicle and crashed it into a shop in Apatity, a small town near the Arctic Circle. Reportedly, the culprit took the vehicle from a driving school, struggled to steer it, crushed a parked car, and crashed into the shop front.

Russian TV channel Vesti said the man was bored and took the tracked vehicle from the driving school operated by DOSAAF, a voluntary organization which cooperates with the armed forces in Russia. Witnesses described the thief as being drunk. After crashing, the man exited the vehicle through its hatch, briefly inspected the damage, and entered the shop through the broken window.

The man, in his late twenties, was later arrested in possession of a stolen bottle of wine. According to the RIA news agency, he did not resist arrest. The shop was not licensed to sell alcohol that early in the morning, the agency added.[7]

In 2018, the wife of a Moscow region deputy shot a music video on the middle lane of one of the capital’s busiest highways. The footage of three women performing choreographed dances while blocking the traffic with an SUV quickly gained fame among social media users in Russia.

Oksana Yakovleva, 29, who performs under the stage name Yaxana, wrote on her Instagram: “I still have the jitters. My cameraman was almost run over, it was scary.” Moscow City Hall’s traffic control center said the performance delayed several ambulances, and Moscow police filed a traffic violation report against Yakovleva.

The incident also stirred up trouble for Yakovleva’s politician husband, Alexei Yakovlev from the pro-Kremlin United Russia party.[8] Yakovlev said that he planned to “scold” Yaxana once he returns from a trip. “I don’t need this PR. I think there are other more suitable places to film these kinds of performances,” he said.

However, while going through Yaxana’s Instagram page, Moscow Times reporters discovered that Yakolev has joined his wife in middle-of-the-street dancing on previous occasions. Yaxana stated that the trouble was worth it for the sake of her pop music career. “The modern world of show business is so cruel that it’s almost impossible to get there without money and connections,” she said. “I have neither.”

Footage of a woman’s hands turning white after playing with snow was shared by media in late 2018. This led to accusations that the authorities were covering up snow with sticky white paint to hide signs of pollution in the coal-mining region of Kemerovo.

Dmitry Ivanov, the head of the town where the video was shot, ordered the removal of the paint and reprimanded the officials responsible for it. “I apologize to the townspeople whose New Year’s mood was spoiled by this,” said Ivanov.

The Prague Civil Society Centre, an organization that promotes social change throughout Eastern Europe and Central Asia, stated that black snow is common in some parts of Russia. On their website, the organization said: “Coal is big business for Russia’s Far East. Although trade in coal is providing a welcome boost to the region’s struggling economy, it is having a devastating effect on both the environment and health of its inhabitants.”

Russia is among the largest coal producers in the world, and their numbers are only expected to increase. The country’s Ministry of Energy predicts roughly 480 million tons will be produced annually by 2030.[9]

Watch: Russians dress up as a bus to cross vehicle-only bridge

A clip taken in 2018 by a baffled motorist shows a group of Russian men hiding inside a yellow cardboard bus costume while trying to cross the Golden Bridge in the far eastern port city of Vladivostok. Unfortunately, a traffic guard saw through their disguise and asked them to make a U-turn.[10]

The massive cable-stayed Golden Bridge was opened in 2012, linking the center of the city to the Pervomaiskyi district. Despite being a popular tourist site, the bridge was closed off to pedestrians in 2015. But locals have started complaining about the ban, claiming they are being denied access to the shortest route into the center.

According to a report by The Moscow Times, the woman recording the video was heard saying, “Where did they come from? This is beautiful, it’s art. Why are they kicking them out?” The video went viral on Twitter, and the comments were filled with laughter and praise for their creativity.