Everyone has a funny wildlife story or two to tell, and the Internet and social media are always full of “cute” animal posts. After all, animals have always played an important role in our daily lives. There are the domesticated animals which provide us with food, clothing, and companionship; then there’s the wildlife most of us will only encounter in zoos, sanctuaries, or on safaris.

It’s not uncommon to read usually unfortunate stories of man’s encounters with wildlife. Sometimes our paths cross quite unintentionally, often with hilarious results. However, some stories are so bizarre that they prompt not only a good laugh but many social media shares. From rampaging seagulls to bears from above, sushi-stealing penguins, and a snakebite victim’s ultimate revenge, here are some of the funniest wildlife stories which have recently made the news. 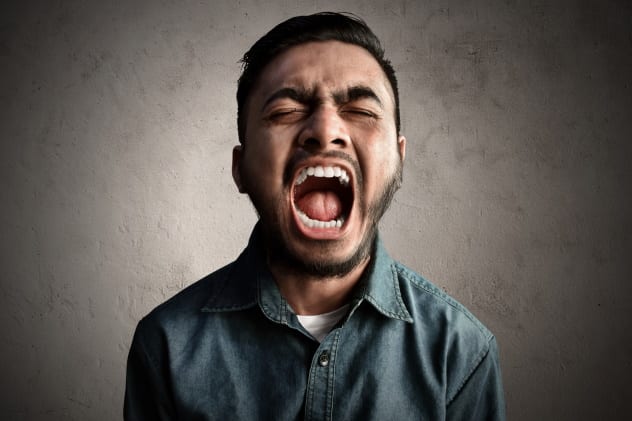 Being bitten by a snake is not particularly unusual. However, one Indian man didn’t quite follow typical first aid procedures and exacted a bizarre revenge on the rat snake which bit him one Sunday afternoon in July 2019. When his quiet drink was interrupted by an unexpected snakebite, the victim bit back. He literally grabbed the snake and chewed it to pieces.[1]

Hospital staff were astounded when the man’s family brought not only the snakebite victim but also the remains of the chewed-up snake. Fortunately, the snake involved was not considered venomous. 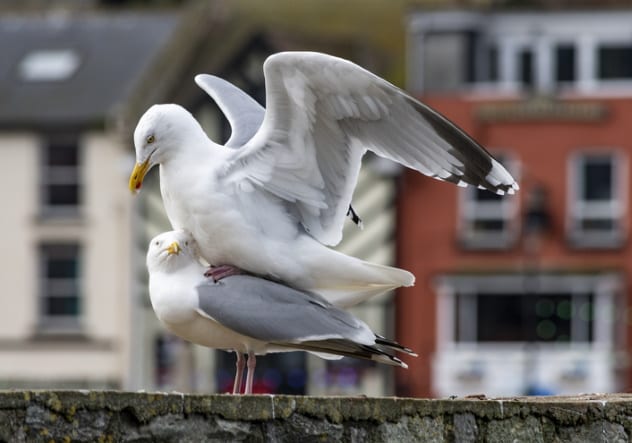 Seagulls are often the scourge of any seaside town as they flock in droves to scavenge food, leaving droppings everywhere. A picnic of fish and chips can quickly turn into a feeding frenzy as flocks of seabirds descend upon unsuspecting holidaymakers. It’s also not uncommon to have an “unwelcome deposit” dropped on you from above.

However, seaside towns in Southern England have been battling drunken behavior, not from their human pub patrons but the native seagulls, who seem to be developing a taste for alcohol. Seagulls in Bournemouth and Devon have been enjoying a tipple from leftover drinks from pubs, breweries, and even from drink containers left at the beach, basically anywhere they can scavenge alcohol.

The inebriated birds have been seen staggering along the beach as well as vomiting on passersby. Wildlife officers called in to treat the ill gulls have reported that they “stink of alcohol” after partying on the booze dregs. The drunken birds are collected and taken to a nearby sanctuary for treatment.[2] 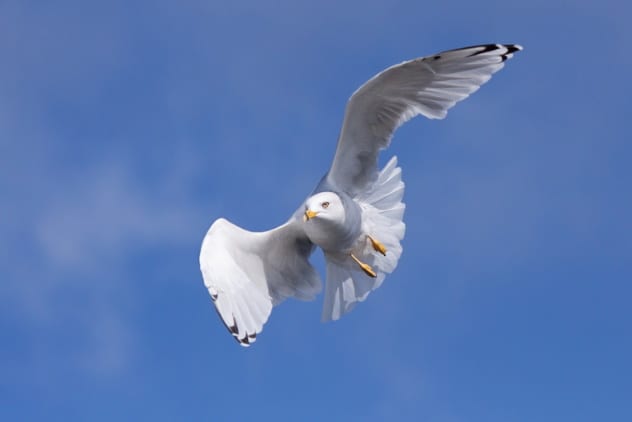 When they aren’t scavenging food from seaside picnickers, seagulls are generally predators, dining on crabs and small fish within close proximity of their rookeries. The seemingly fearless birds have even been known to attack passing whales, diving for a bite of live whale meat.

In July 2019, a family from Devon was distraught when a swooping seagull carried off their pet. Gizmo the Chihauhua was watching his owner hang out the laundry in the backyard when a seagull suddenly descended and carried off the small dog.[3] Despite hopes that their pet may have been dropped when the gull realized it had snatched a dog, Gizmo has not been located.

Wildlife officers confirmed that this was bizarre behavior, even for seagulls. 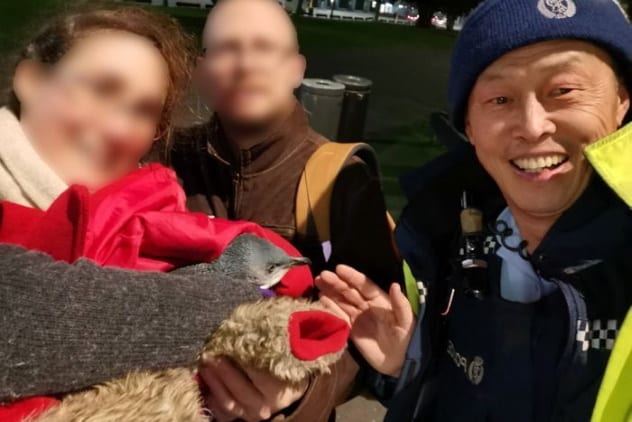 Little Penguins, native to New Zealand and parts of Southeast Australia, tend to be shy creatures. Tourists and locals enjoy the sunset “penguin parades,” when the little birds waddle back into their beachside rookeries after a day’s fishing. Very rarely do they welcome human interaction.

However, in July 2019, a couple of little penguins in Wellington, New Zealand, apparently decided to save themselves the trouble of fishing. The pair set up nest under the fridge in a harborside sushi bar, where they were helping themselves to the fish. Wildlife officers apprehended the pair, returning them to Wellington Harbour and its abundant fish.

Obviously not happy to be back in the wild, the pair once again swam back to shore, waddling back up the street to resume their free feeding. Officers then relocated the birds a little farther offshore in the hope that they would resume more traditional fishing methods.[4] 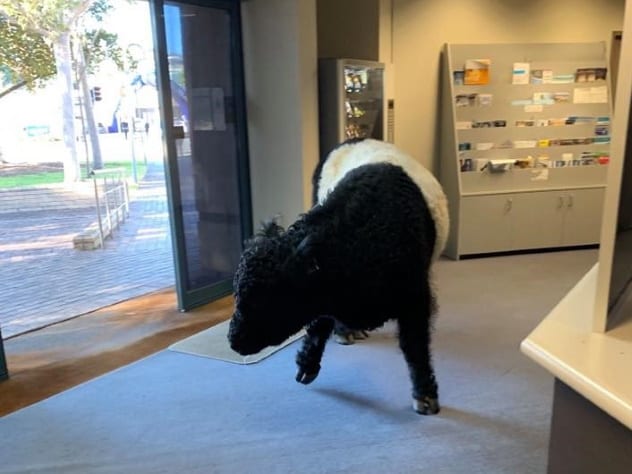 In June 2019, a police station on Australia’s east coast was forced into lockdown, not over a violent criminal but a rampaging steer.

The Belted Galloway was one of two steers being transported on a livestock trailer through the coastal town of Batemans Bay. When the vehicle stopped at a traffic light, one of the steers managed to escape from the trailer, causing havoc as it ran up and down the busy street.

Local police were astounded when the steer eventually barged through the door of the police station, rampaging through the front area. Unlike some parts of Australia, Batemans Bay is not a place where you would expect to find cattle in the middle of town.

Humorous reports of the incident told of the offender being given a “Moooooooove-on direction” and stated that it was looking for “bale.” Livestock officers were eventually able to impound the runaway before reuniting him with his owner.[5] 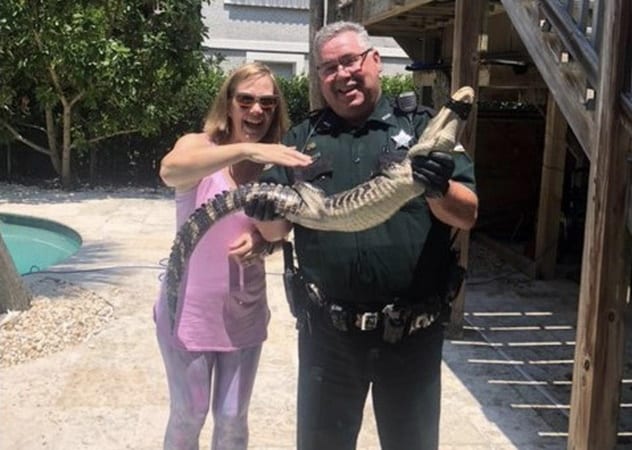 When you live near waterways that are home to potentially dangerous reptiles such as alligators and crocodiles, you are well-aware of the safety precautions to avoid unwelcome encounters. But you would expect your backyard swimming pool would be a relatively safe place to cool off. Not so for one family in Fernandina Beach, Florida, who found that an alligator had made itself quite at home in their pool in August 2019.

When Wendy Langley heard splashing in the pool during the middle of the night, an alligator was the last thing she expected to find swimming around when she turned on the floodlights.

Wendy didn’t want to risk her small children or pet dog coming into contact with the alligator in the morning, so a late-night rescue mission began to remove the unwelcome swimmer. Local authorities took several hours to trap the reptile, transporting it to a more suitable swimming spot.[6] 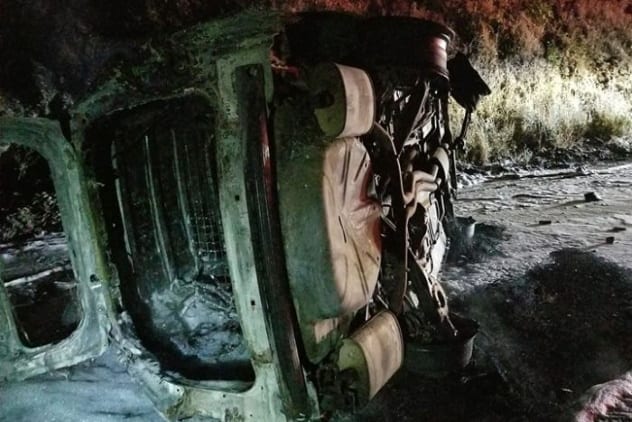 Wandering wildlife are a known road hazard. Around the world, deer, elk, kangaroos, livestock, and more are frequent causes of accidents when they wander onto busy highways. But bears? In August 2019, a California police car was reduced to burned-out wreckage after being hit by a surprise falling bear.[7]

A sheriff’s deputy was driving along State Route 96 when a bear suddenly landed on the vehicle’s hood, smashing the windshield. The impact caused the vehicle to roll onto an embankment, bursting into flames.

The driver miraculously escaped injury in the bizarre encounter, and the bear decamped from the scene before emergency crews arrived. It isn’t known whether the bear simply fell on the car from the nearby steep embankment or jumped onto it. 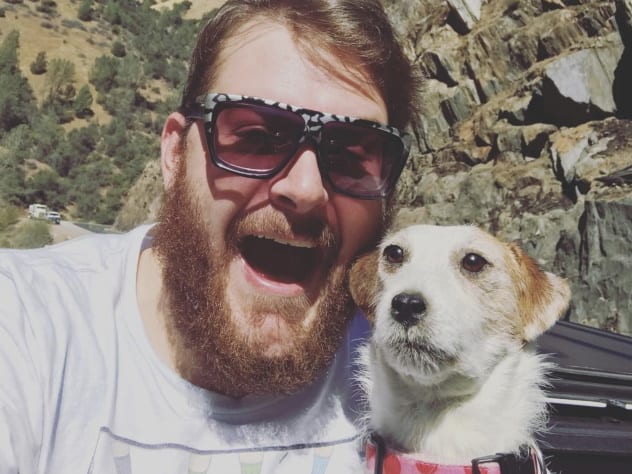 Many of us enjoy traveling with our dogs. Be it a short trip to the shops or a long road trip, our canine friends make excellent travel companions. It is always sad when we inevitably have to say goodbye. Not so for one Oregon dog owner, however.

When his loyal Jack Russell Terrier, Phoebe, died in 2013, Mitch Byer had her stuffed so that she could continue to be an everyday part of his life. He even continues to take her on road trips. However, he has run into issues involving people concerned about the dog left in his car. This has happened frequently enough that Mitch now places a sign in his window that reads, “Don’t worry, the dog is already dead. She’s taxidermied. Please don’t break my window.”

Phoebe even has her own social media accounts, which have attracted a following.[8] 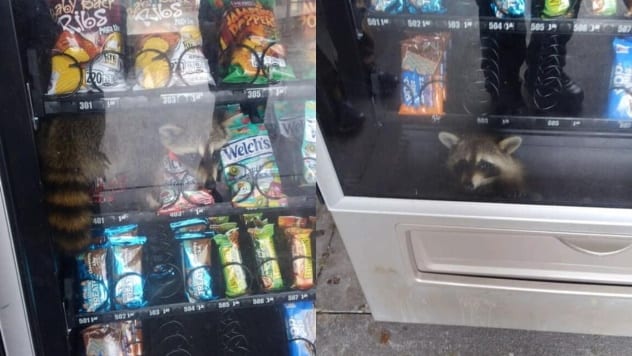 The raccoon’s masked facial features tend to mark it as a bit of a bandit. However, one furry thief in Florida was caught red-pawed in August 2019. Not content with foraging for fruit, or even scavenging from a garbage bin, this unfortunate raccoon managed to break into a high school vending machine, where he proceeded to feast on fruit snacks.

Unfortunately, he became trapped in the machine, from which he was later apprehended. Local wildlife authorities attended the scene, wheeling the vending machine outside before dismantling it and letting the four-legged thief make his escape.[9] 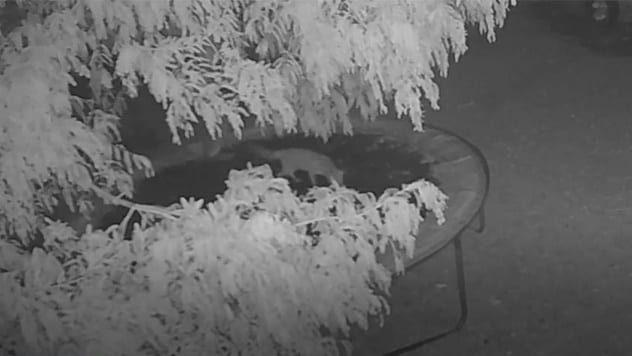 All kids love a bit of fun in the backyard, and even baby animals enjoy a frolic in the wild. Childhood stories abound with tales of woodland creatures coming out at night to play. However, these midnight frolics actually do happen, as a homeowner in Cardiff, Wales, discovered in August 2019.

His motion-sensor cameras alerted him to movement in the yard very early one morning. He was astonished to find the culprits were a family of fox cubs happily playing on the trampoline. The man filmed the wildlife antics for some time, as the baby foxes happily bounced and played.

It isn’t unusual to see the odd fox passing through the backyard early in the evening, but taking over the play equipment in the middle of the night was certainly something out of the ordinary.[10]

Lesley Connor is a retired Australian newspaper editor who enjoys researching bizarre, unusual, and entertaining news stories from around the world.