Before I start on the list, I feel that I should advise that a couple of the items here are quite horrific and I would recommend that those who are weak of heart or who have a nervous disposition avoid them. The items I am referring to are marked in the text. The items are not in any particular order as it is very hard to rate the historical importance versus the just plain weird value.

The Castrati were men who were forcibly castrated at an early age in order to ensure that they would not experience the hormonal changes of puberty that lead to the lowering of the male voice. This meant that as adult men they sang like a modern soprano (they retained their boy soprano voices). After the Catholic Church ensured that all nations banned the practice, Pope Leo XIII took the remaining Castrati into the care of the Sistine Chapel Choir to guarantee them a quiet life (at the time they had become the subject of ridicule). Moreschi is the only castrato to be recorded solo. In this recording he is over 50 years old and had lost much of the quality of his voice — nevertheless the resulting recording is incredibly eerie.

This amazing French singer has one of the highest recorded notes in classical music. You must listen to the whole song; the last note is unbelievable! Put your crystal in a safe place! I have done some research and various sources give her highest note as either a B above Top C, or a D above top C, which, if I recall my theory classes correctly, would be B7 and D7 respectively. This is the last octave on a classical piano and is only three octaves lower than G10 (dog whistle pitch), the point at which humans can no longer hear the note. The highest recorded singer is Georgia Brown who is reported (by the Guinness Book of Records) to have reached G10.

Believe it or not, Florence managed, despite being famously awful, to sell out an entire concert at Carnegie Hall. She had many admirers (among them Enrico Caruso). This has to be heard to be believed. As a particular point of interest, after she recorded this song, she told the sound engineer that no second try was needed as it was perfect. See for yourself. (She is singing Queen of the Night by Mozart, incidentally).

Pope Leo XIII (patron of Moreschi) was the first Pope in history to be recorded. He was the 256th Pope and reigned from 1878 – 1903 and is probably most famous as the Pope who declared Anglican religious orders invalid (i.e., he said Anglican priests and Bishops are laymen). He also strongly promoted the study of the Bible in the home and was known as the Pope of the People. In this recording he chants the Ave Maria (Hail Mary).

William Joyce (or Lord Hawhaw has he more well known) was a fascist politician who worked for the Nazi’s during the war as a propagandist. His distinctly “posh” English accent is the cause of him receiving his mocking nickname. Joyce broadcast propaganda from radio stations in Berlin, Hamburg, and Luxembourg. Whilst it was not illegal to listen to his broadcasts in England, it was frowned upon. Nevertheless his recordings were very popular with the public as a source of amusement. He became a hated and ridiculed figure. He escaped after the war but an English soldier overheard him talking at a cafe and recognized his voice. He was arrested and executed for treason. This recording is a snippet of one of his propaganda broadcasts and it begins with his signature “Germany calling, Germany calling.”

Number Stations (shortwave radio stations of unknown origin) have been reported since World War I and continue to this day. No one knows what their reason is though many people suspect they are coded messages used for espionage (though no country has admitted this). The broadcasts are usually a female voice (though male voices have been heard) and they generally broadcast streams of numbers, words, or letters. They are sometimes apparently random, and other times organized. In the ’90s, amateur radio enthusiasts tracked the source of one number station to a US military base. The FCC refused to comment.

Florence Nightingale was the first person to recognize that hygiene and food were important in the care of patients (up until her time, hospitals did not worry about hygienic conditions). She is considered to be the mother of modern nursing. She lived from 1820 to 1910. She is also sometimes referred to as the Lady of the Lamp. This recording is one of three she made in 1890 to people she had known during her work in the war effort.

Exorcism is the ritual used by the Roman Catholic Church and the Orthodox Church to cast devils out of a possessed person. Throughout this Russian exorcism you can hear the voice of the priest reciting the prayers of the ritual while the afflicted (I can not tell if it is a male or female) person screams in a variety of voices. It is quite horrifying to listen to and I would not advise it for people who have a nervous disposition.

Read about the controversial subject of exorcisms with Demonology: Possession, Exorcism, and the Kingdom of Darkness at Amazon.com! 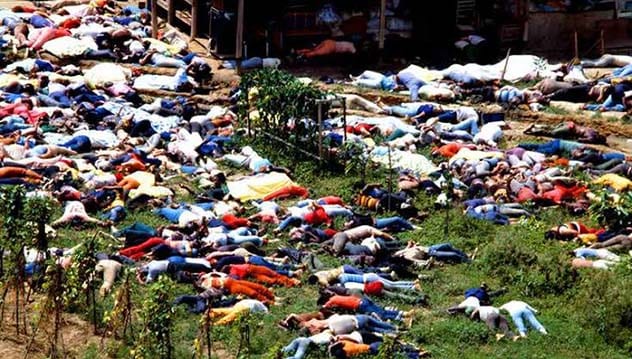 YouTube has banned recordings of this audio due to its disturbing nature. You can, instead, listen to the full suicide tape here.

Jim Jones was the American founder of the People’s Temple group. The group became infamous after the November 18, 1978 mass suicide/murder in Guyana where the group had moved after rising tensions in the USA. On that day, 909 people drank cyanide after Jones ordered his men to kill visiting Congressman Leo Ryan and numerous members of his entourage. In this horrifying recording you hear the last 30 to 45 minutes of Jones directing his followers to poison their children and then themselves. At one point one of the female voices on the tape is heard to say, “It’s okay, they aren’t crying because of pain, it is just because of the bitter taste). Some of the bodies found had died of forced cyanide injection or gunshots. Jones was found dead of a gunshot wound to the head. Discretion is advised in listening to this recording. If the recording piques your interest, I would recommend buying the excellent recent documentary on the tragedy called Jonestown – The Life & Death of Peoples Temple

1 Édouard-Léon Scott de Martinville, First Recording of a Human in 1857

Previously this record was held by Frank Lambert (bonus item 2 below) for his phonograph recordings, but in 2008 the phonautogram recordings of Édouard-Léon Scott de Martinville from 1857 were finally able to be played back for the first time. Even Monsieur de Martinville never had the ability to play back the sounds he recorded. The phonautogram was a machine that sketched a diagram of sound waves (effectively the first recording device) though lacking a playback ability. Édouard-Léon was born in 1817. That means the voice you are hearing on the recording above was born over 200 years ago. George III (the Mad King) was King of England, Louis XVIII was King of France, and Servant of God Pope Pius VII was pope.

+ The Sounds of Hell, Hoax Or Not? 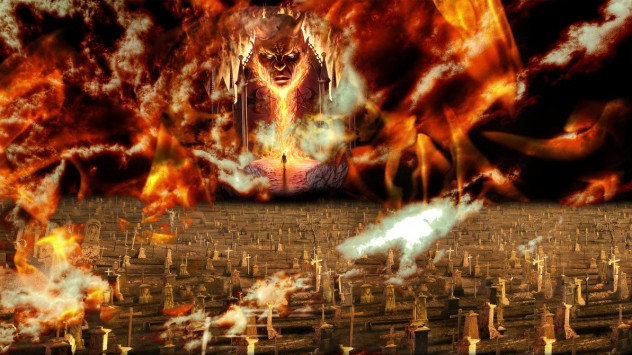 Okay, I know this is a top 10 list, but there has been so much demand from reddit to add the Sounds of Hell recording that I have added it. The background is that a group of Russian scientists were digging in Siberia when their drill started spinning wildly (usually indicative of hitting a pocket of air). They lowered microphones into the hole (apparently this is normal as the sounds can help to determine what the physiological makeup is of the area they have drilled to). When they listened to the resulting recording, it appeared to be sounds coming straight from Hell. This is, in fact, a hoax. It has gained great popularity on the internet and does have some basis in fact, but the bit about hell is, well, not true.

Frank Lambert’s Experimental Talking Clock (1878) Before And After Restoration

This item has been demoted from position 1 to bonus item 2 due to the fact that a year after its publication, an older recording was discovered. That now replaces this in position 1 but for the sake of the integrity of this list, I am keeping this item here. Frank Lambert was a French-American inventor. Lambert was born in Lyon, France and then moved to the United States in 1876 and became a citizen in 1893. Lambert is currently in the Guinness World Book of Records for the oldest playable recording on a machine called the phonograph. Lambert was also famous for inventing the modern typewriter. This is one of the earliest recordings of a human voice in history from 1878.

For more eerie lists just like this, check out Another 10 Incredible Recordings, and 10 Amazing Rare Recordings.