Many cultures throughout history have used the remains of both humans and animals for various things: clothes, weapons, rituals, medicine, and so on. While we wouldn’t expect many of these things to translate into the modern day, the reality is that many people still seem to have plenty of uses for dead (and sometimes living) people and are determined not to let any uproar keep them from doing what they want. 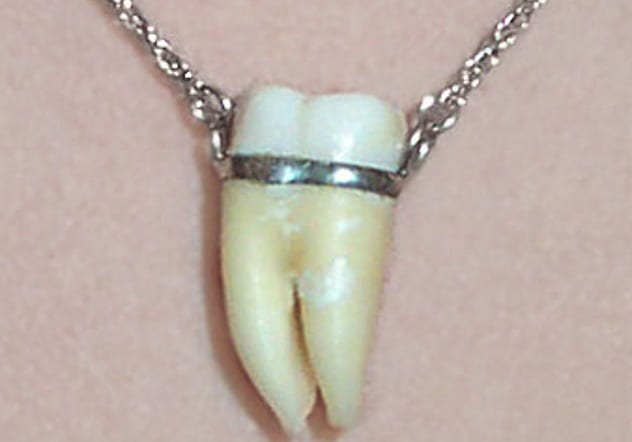 We’ve spoken before about companies that will make diamonds out of your dearly beloved when they have passed, but that’s not your only option if you want to wear the deceased. Sunspot Designs makes jewelry by working with bones and teeth. Owner Columbine Phoenix likens working with these to using “homegrown ivory” and says that it is intended to celebrate life rather than death. She gets the bones used in her work from educational suppliers, who acquire them from schools or museums that are updating their collections.[1] Unsurprisingly, the main target audience is goths. The pieces can cost up to $200.

If you are unfortunate enough to still have all your loved ones in your life, fear not, ladies, because women can now have their breast milk turned into jewelry. In fact, there are no less than 70 businesses devoted to turning a woman’s milk into something personal yet fashionable. Companies such as Breast Milk Keepsakes and Mommy Milk Creations will take a small amount of your milk and turn it into a bead that can be placed in things like pendants, earrings, and bracelets for about $80.

Finally, if anyone remembers Kesha, you’ll know that she has always had a bit of a quirky sense of style, but you’d probably still be quite surprised to learn that she fashioned some of her attire out of human teeth—her fans’ teeth, to be exact. Back in 2012, she asked her fans to send her in a tooth each and ended up getting about 1,000 of them, which she used to make earrings, a headdress, several necklaces, and . . . a bra. Talk about a supportive fan base. 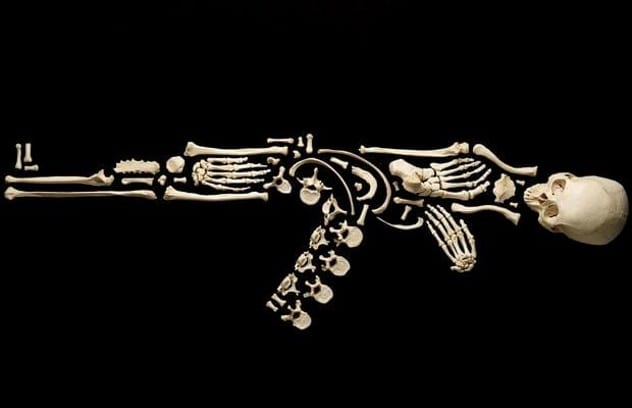 Auctions are a great place to pick up some unusual pieces at low prices and are a popular attraction for artistically minded people. When Francois Robert attended a school auction in Michigan, he was really just looking to pick up a few old lockers for practical, rather than artistic, purposes. But the golden rule in auctioneering is if you buy something, you get to keep whatever’s inside. So when one of the three lockers he purchased for the bargain price of $50 turned out to contain an actual human skeleton, Robert knew he had found his next project.[2]

To be clear, the skeleton had been used for science classes and was not the sad remnants of a long-forgotten poindexter. Actually, this particular skeleton had been wired to hold its shape, so Robert had to trade it in for another before he could get to work. He decided that the best way to put his new friend to use was to create a series of photographs in which he arranged the bones into various shapes reminiscent of war. Creating the likes of guns, grenades, tanks, planes, and knives, Robert used his second skeleton to create a haunting collection of photographs for a series entitled Stop the Violence. While it’s hardly the subtlest collection you’ll ever see, Robert certainly got his $50 worth. 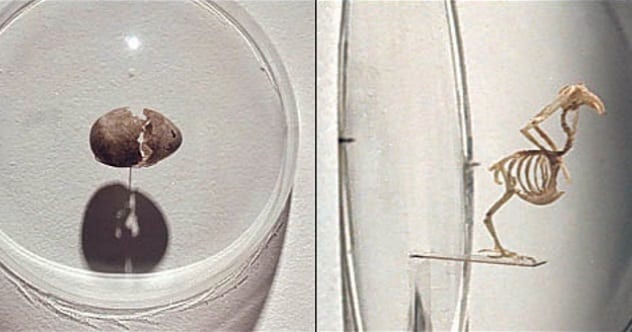 Looking at Tim Hawkinson’s two 1997 sculptures, Egg and Bird, you could be forgiven for thinking you were looking at exactly that: an egg and a bird. Of course, this is not the case, as the sculptures are actually made out of everybody’s favorite disembodied body parts: hair and fingernails.[3]

Much more subtle than many of the other entries on this list, these sculptures are meant to represent our intrinsic link to nature and how our sense of reality can never escape our bodies, which provide the materials to create the illusion we’re observing. 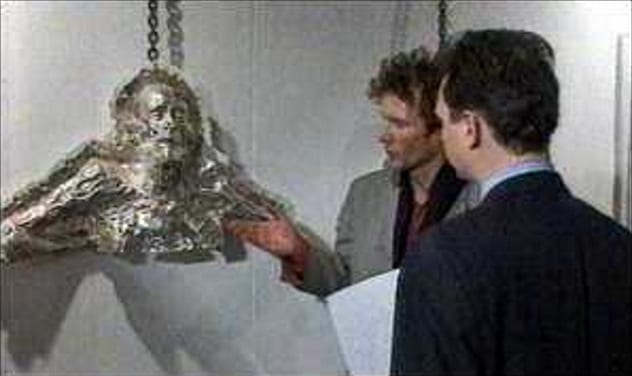 Anthony-Noel Kelly is a British artist who made his name in the 1990s with his realistic sculptures of human bodies, mainly in the form of busts. The police became suspicious of his work after a 1997 exhibition and launched a search which found human remains in both his house and his girlfriend’s apartment. With the help of Niel Lindsay from the Royal College of Surgeons, Kelly had stolen the body parts over a three-year period. He used these to make casts, which were then gilded in silver and gold.

About 40 body parts were recovered, including heads, torsos, and limbs. Lindsay was paid the generous sum of £400 for his involvement but also received six months in jail, while Kelly was sentenced to nine months. The pair were the first people in the history of the United Kingdom to actually be convicted with the theft of human remains, after a ruling that human bodies can be owned—and therefore stolen. Such a crime had already been considered as “outraging public decency.”[4] 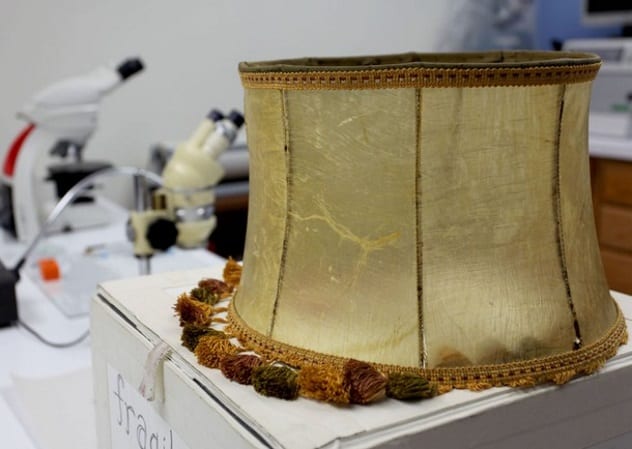 There has been much speculation over the years as to the veracity of the claims that the Nazis made lampshades out of human skin. Many people believe it’s just a ridiculous urban legend, created to make the Nazis seem even more evil than they really were. Well, in 2005, a lampshade was bought in a car boot sale for $35 from a man who told the buyer it was made from the skin of a Jewish person. The buyer, Skip, eventually became too uncomfortable with the lamp and gave it to his journalist friend Mark Jacobson, who investigated things further.

The lamp was brought to Bode Technology in Washington, DC, where it underwent a DNA test. Bode Technology is one of the leading DNA labs in the world, having done much work for the US government, including identifying remains from 9/11. When the results came back, it was confirmed that the material used on the shade was in fact human skin from two different people. The first mention of Nazi skin lampshades comes from 1945, by a reporter named Ann Stringer, who says that other items made in the Buchenwald concentration camp included shrunken heads and an ashtray made from a human pelvis.

An artist named Andrew Krasnow has also made a number of pieces out of human skin, including lampshades, a direct reference to Buchenwald.[5] Other things he has created include boots, maps, flags, and a $10 bill. You probably don’t need to be told that this is a statement about morality, or lack thereof, in the United States. 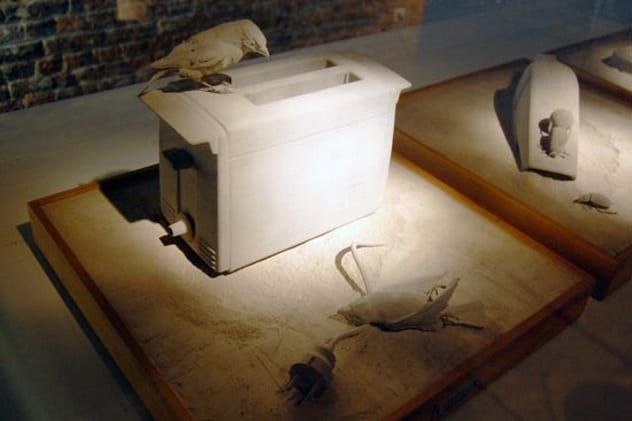 If someone asked you ten years ago whether a machine could be switched on and left alone for 24 hours to make a house entirely by itself, you probably would have said that it’s quite unlikely, at the very least. And yet, that’s where we are today. So if I were to ask you today whether you could turn your grandfather into a rocking chair, you might want to think about your answer.

Wieki Somers is a Dutch artist who wanted to come up with a more creative way to use cremated ashes. Thus, her In Progress exhibition was born. Somers loaded 3-D printers with donated ashes, which were then turned into various sculptures and pieces of furniture. The results are hauntingly familiar household objects that make us reconsider our attachment to worldly possessions.[6] While we’d like to think this won’t catch on, you may need to get used to the idea of living in a world where you need to distinguish between “Rock on, Grandpa!” and Rock on Grandpa. 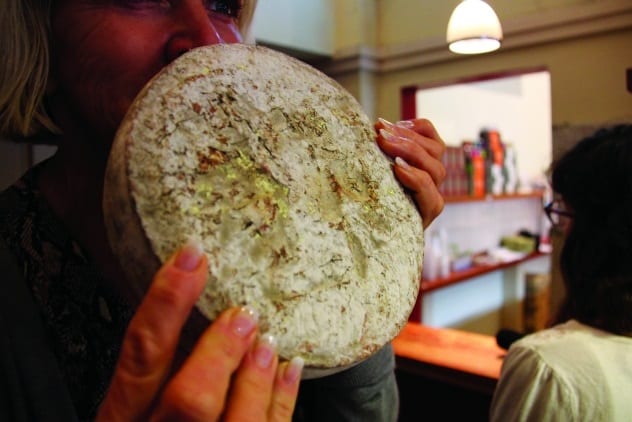 The Dublin Science Gallery in Trinity College is a place for exhibitions where science meets art. Selfmade is one such exhibition, where cheese was made from celebrities who donated not their milk but rather their phlegm, tears, skin bacteria samples, and whatever was found lurking in the depths of their belly buttons.[7]

The bacteria taken from their bodies was used to grow cheese, which then smelled and tasted like that body part. A cheese and wine night was hosted, although the guests were not allowed to eat the art, just smell it. 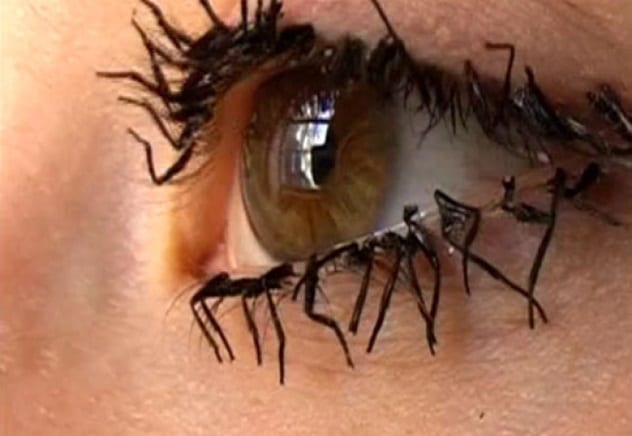 Jessica Harrison is a British artist who specializes in what she calls “body furniture.” This is a bit of a misleading name, as her creations don’t actually involve using pieces of the human body, but they’re generally inspired by it, such as her hairy chair or her drawers that look like human flesh. But she caught a lot of attention in 2010, when she posted a video of her latest fashionable design: fake eyelashes made out of real fly legs.[8]

Although they are not available to buy (not yet, anyway), she still made and wore them herself, which is pretty disgusting. The eyelashes have drawn criticism from PETA, who compared them to hacking off the ears of beagles to make clothes. 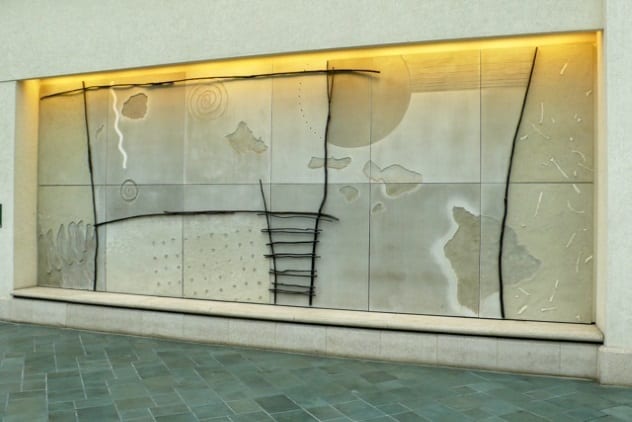 Forgotten Inheritance is a piece of wall art made of stone and hardened sand that first went on display in the Hawaii Convention Center in Honolulu in 1996. Despite being approved by a committee that included native Hawaiian members, many other natives took great offense to the sculpture. The reason for this is that it contains the real bones of Hawaiian natives.

Such a sculpture would likely gain a certain amount of criticism anywhere in the world, but the natives of Hawaii have a strong belief in malama iwi, which is taking care of and respecting their ancestors’ bones. After receiving a large number of complaints for years, officials at the convention center finally covered the sculpture in September 2013 and began investigating how to remove it without destroying both it and the bones it contains.[2] Ultimately, an agreement was reached to allow Forgotten Inheritance to continue to be displayed. 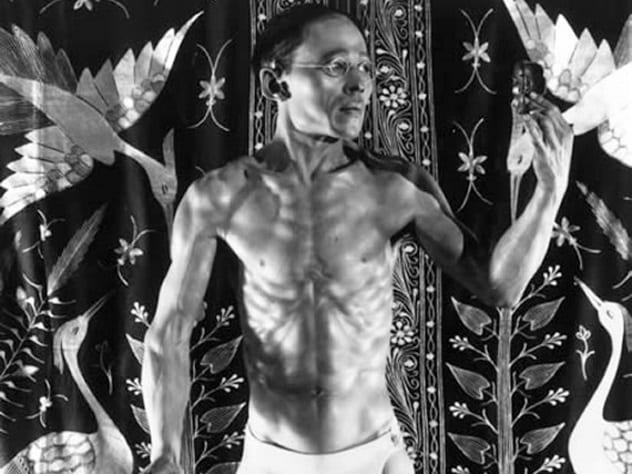 Photo credit: Ripley’s Believe It or Not!

Hananuma Masakichi was an artist who lived in the 19th century. Late in his life, he was diagnosed with tuberculosis and decided that he wanted to immortalize himself by creating a life-size self-sculpture. He made the sculpture using an elaborate layout of mirrors that allowed him to carve the bits of himself he couldn’t see. He constructed each body part individually. The roughly 5,000 individual pieces of the sculpture are reportedly joined together so well that not even a magnifying glass can detect the seams.

Masakichi polished the model, used needles to poke tiny pores in the skin, and plucked hairs and inserted them into these pores. For each body part on the model, he used hair from the corresponding area on himself in order to create exact realism, right down to the eyelashes. He also pulled out all his own teeth, fingernails, and toenails and made eyes out of glass.

Masakichi finished in 1885 and would stand next to the sculpture so that people could try to guess which was human and which was art. Apparently, it was extremely difficult to tell. The sculpture is currently owned by Ripley’s Odditorium and has been restored and maintained by extremely talented professionals.[10]

Simon hopes to one day make a cool mirror out of all his shattered dreams. Follow him on Twitter here.