The world’s oceans make up around 70 percent of this planet, and only 5 percent of them have been explored. That means that the vast majority of Earth is made up of deep, dark waters with mysteries waiting to be discovered.

Even with the small amount of ocean exploration that has been completed, some incredible places, animals, and objects have been found. Searching the depths of our oceans can give us insight into the past, the present, and sometimes, even the future.

Exploring these areas lets us see pieces of history and gives us ideas of other things that may be lurking in the deep. Here are 10 of the most unbelievable discoveries that have been made underwater. Can you imagine what else is out there? 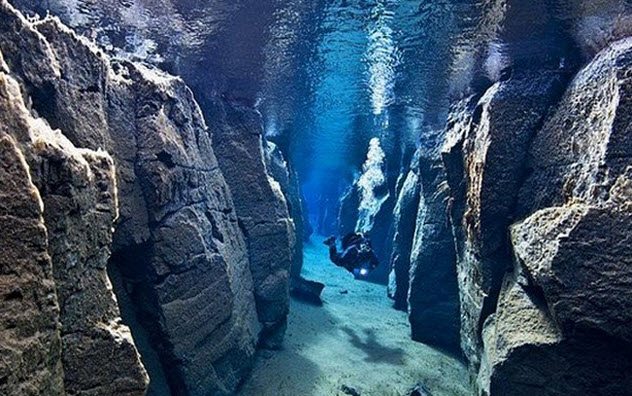 The North American and Eurasian tectonic plates have been spreading farther apart in recent years as the North American plate moves westward. This impressive occurrence can be seen both on land and by diving deep in between the two plates near Iceland.

This has been done by a number of underwater photographers and scuba divers. Alexander Mustard, in particular, is a diver and marine biologist who has explored this area and recounts his experience as an incredible one. He notes that visitors can become nauseated as a result of the “sheer walls and clear water.”

Though the future cannot be completely foreseen, researchers can make predictions based on the current rate of plate motion, which is about 2.5 centimeters (1 in) per year.[1] 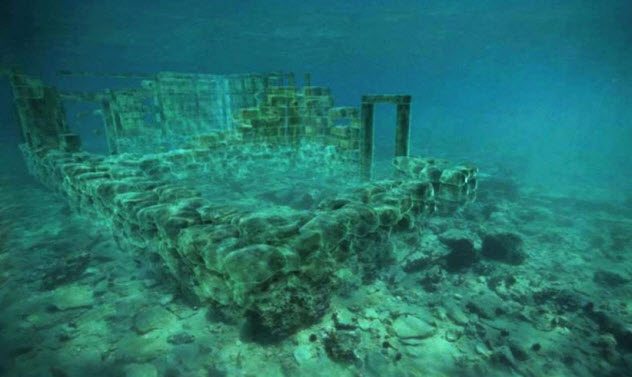 Discovered in 1967 by Dr. Nic Flemming, this port town from the Neolithic era can be found off the southern coast of Greece. Ancient pottery was discovered at the site, giving archaeologists the impression that the town of Pavlopetri traded goods within the city and by sea.

According to Flemming in 2009, Pavlopetri is thousands of years older than most of the ancient underwater ruins that have already been discovered. The estimated area of the town covers about 100,000 square meters (1.1 million ft2). Its remote location likely preserved it from being disrupted by humans before the discovery.[2]

Neolithic pottery is one of the most notable finds in this underwater city. It provided a timeline for researchers to understand just how old these ancient ruins were. Originally, Pavlopetri was thought to be part of the Bronze Age. But after further exploration, the city was found to be more than 1,000 years older than previously thought. 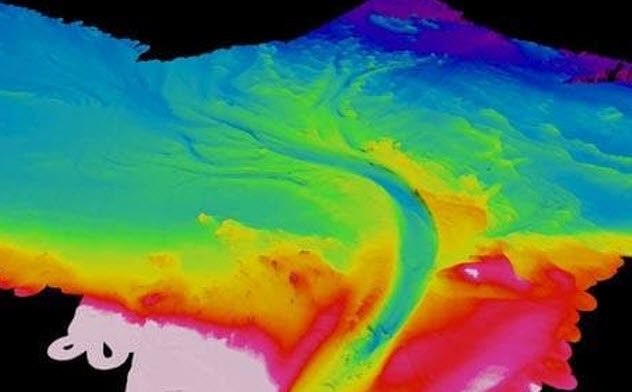 At the bottom of the Black Sea, there is an entire ecosystem with a running river, trees, and waterfalls! How does this work, though—a body of water running through another body of water?

It seems confusing, but it actually occurs because the water in the river is much saltier—and therefore denser—than the surrounding water in the Black Sea.

As if this wasn’t cool enough, it is estimated that the river’s large volume would make it the sixth largest river on land. Finding this wondrous little ecosystem within the Black Sea, which eventually drains into the Atlantic Ocean, could be crucial to researchers’ understanding of our oceans as a whole.

This discovery can potentially help scientists better understand life underwater and the different conditions that allow phenomena like this to occur on our planet. 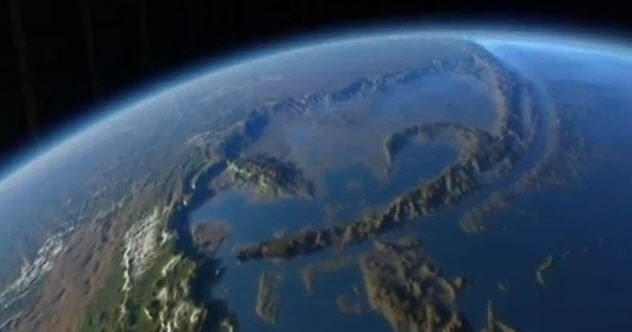 If you thought the underwater river was impressive, you’ll love this underwater canyon. It is so huge that it can only be seen in its entirety from space. Crazy, right?

Found in the Bering Sea, Zhemchug is also the deepest underwater canyon. With a volume of 5,800 cubic kilometers (1,400 mi3) and a depth of 2.6 kilometers (1.6 mi), Zhemchug could fit the entire Grand Canyon inside it!

Submarines can travel through this deep-sea site as well as the different marine life found in the Bering Sea. Since Zhemchug Canyon is so ridiculously wide, the entire underwater canyon can only be seen if you are above the curve of the Earth.[4]

So unless you have connections that can get you off Earth and into a spaceship, then you might just have to look at pictures. 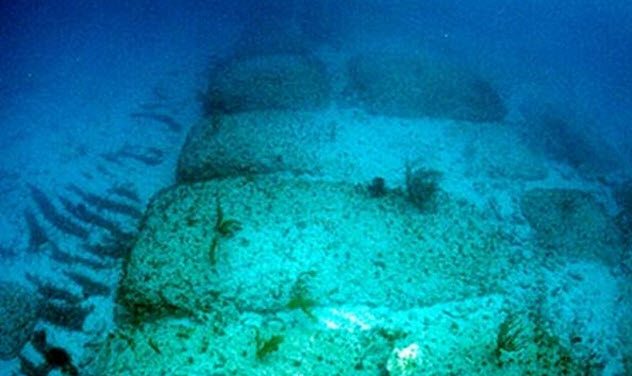 One of the most popular tourist attractions in the Bahamas is Bimini Road, an underwater path discovered in the 1930s. The origin of this ocean feature is unknown, though many believe it to be a path leading to the lost city of Atlantis.

Sitting just 6 meters (20 ft) under the water’s surface, Bimini Road is accessible to those curious enough to dive down and experience the mysterious formation for themselves.[5]

Possible origin stories for Bimini Road have been featured in different mystery pieces on Unexplained Mysteries, Unsolved Mysteries in the World, and more. The origin theories include ancient Egyptian divine protectors, the path to Atlantis, and a natural occurrence without any help from humans.

Wherever this road came from, it’s an awesome sight to see. 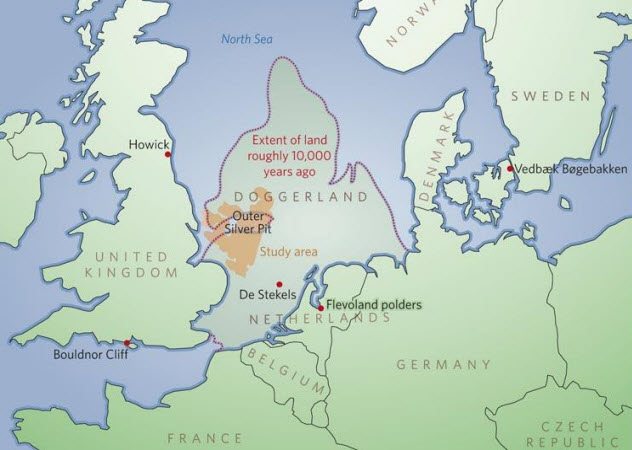 While the original Atlantis waits to be found, a similar discovery has been made deep within the North Sea. “Doggerland” is the name of a huge landmass that became submerged in the ocean at least 8,500 years ago.

Researchers believe that the landform reached from Scotland to Denmark and was once occupied by mammoths. After the land was settled by Mesolithic humans, it eventually flooded over thousands of years. It has been called the “real heartland of Europe” by those who discovered it due to its large size and possible human community of hunter-gatherers (thought to be in the tens of thousands).

Doggerland is particularly impressive because it proves that the islands that are now Great Britain were once connected to the rest of Europe. Though it’s not the real Atlantis, this underwater world is just as interesting. Climatologists, archaeologists, and geophysicists continue to map the entirety of these ancient ruins and are working to understand them more fully.[6] 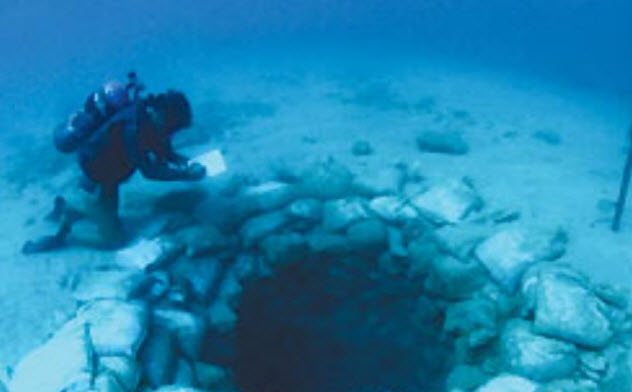 Ancient cities found in the depths of the sea are always intriguing, no matter how many are discovered. The ruins of Atlit Yam are 8–12 meters (26–39 ft) deep in the Mediterranean Sea off the coast of Israel.

Discovered in 1984, the city is believed to belong to the Neolithic era and is one of the largest underwater settlements ever found. Exploration at Atlit Yam has produced the remains of houses, water wells, humans, and animals as well as objects, artifacts, and mysterious structures dating back thousands of years.

One of its most impressive structures is thought to be a ritual site consisting of huge stones arranged in a circle around what used to be a spring. Other interesting discoveries at Atlit Yam include a stone well used for water service and eventually as a disposal pit (due to the large number of remains found inside).[7]

Sixty-five sets of human remains were also located in and around the city, some providing the earliest known cases of tuberculosis. There were also bones of wild and domesticated animals, suggesting that those who occupied Atlit Yam both hunted and raised animals for food. 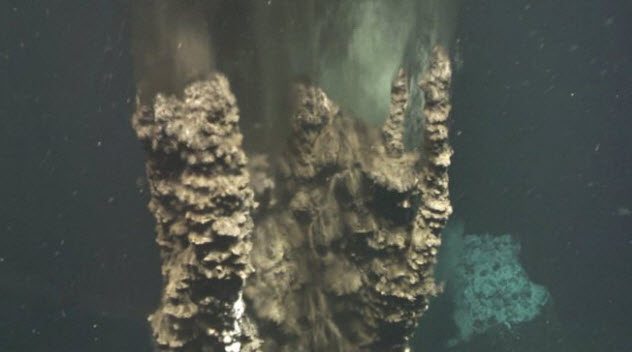 Certain chimneylike formations occur underwater when seawater meets magma. These hydrothermal vents are almost a type of hot spring that spits out jets of water and fluids reaching 370 degrees Celsius (700 °F) and higher.

Often called “black smokers” due to the color of their iron sulfide deposits, these vents have been found in various places in our oceans. But their northernmost location was discovered in the Arctic Circle between Norway and Greenland in 2008.

There are five vents in this cluster of black smokers. One of them is almost four stories tall, creating the largest sulfide deposit ever recorded. The discovery of this vent field was unexpected.[8] Researchers did not think that such a formation was possible in an area with such slow tectonic plate spreading. (That’s how seawater makes its way through the Earth to collide with magma.)

These black smokers demonstrate just how unpredictable and impressive nature is, while hinting at the other mysteries that could be hiding below the water’s surface. 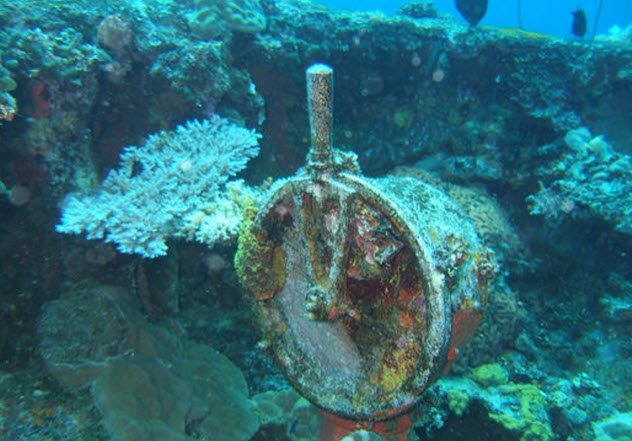 Shipwrecks are some of the most interesting things to find in the ocean. They tell a story of another time in history, give clues about what happened and who was there, or just look cool.

Chuuk Lagoon is found in the Caroline Islands in the Pacific Ocean, north of New Guinea and east of the Philippines. Here, the wreckage of countless Japanese ships and aircraft was discovered, having been destroyed in World War II.

The “Ghost Fleet” was the subject of a 1969 Jacques Cousteau film in which the wreckage was explored and the site began to be recovered. However, it is said that bodies still remain among the ships and planes and the site itself is partially visible from above the water’s surface.[9]

The wreckage of Japan’s Imperial Fleet is an incredible example of an underwater discovery that is not only intriguing but informational and historic as well. 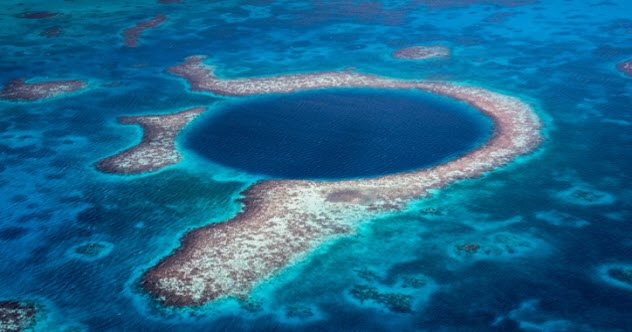 With a name as daunting as this one, the Great Blue Hole of Belize should surely attract curious divers and thrill seekers—and it does. Found off the coast of Belize, this natural sinkhole is the largest ever recorded.

Made famous in 1971 by Jacques Cousteau, it has since developed into a tourist attraction. Visitors can take guided diving trips into the Great Blue Hole that was formed from a limestone cave during the last Ice Age hundreds of thousands of years ago.[10]

This impressive natural feature in the Caribbean Sea is 300 meters (980 ft) across and 125 meters (410 ft) deep, making it quite the accomplishment to dive the entire depth. (This is not recommended, and guided tours will only take you a fraction of the way down.)

Abigail is a 21-year-old lover of dogs, donuts, and everything Disney. She is a firm believer that there’s nothing much better than a good book and a great Spotify playlist on a rainy day.