The animals that inhabit our world are amazing and deserve our respect. But they can fool us sometimes. For example, elephants are magnificent in stature and seem dangerous. But in reality, they are large, gentle beasts. They have strong instincts to care for their families and would not hurt a fly unless they had to.

However, some animals are not so easy to judge and can be quite deceiving. Are they cute and friendly, or will one touch kill you? Here are 10 animals that don’t look dangerous but are actually deadly. 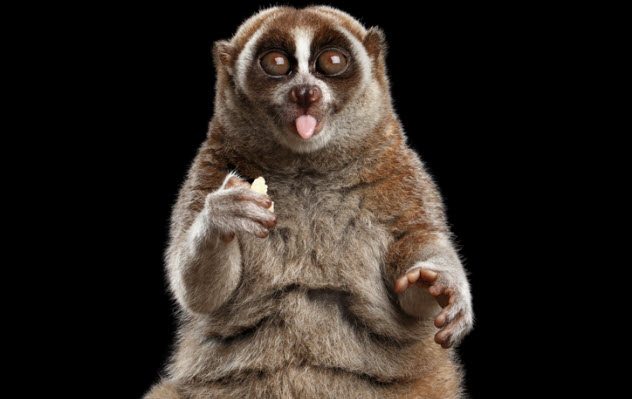 The Kayan loris (aka slow loris) is a nocturnal primate that is closely related to the lemur. Kayan lorises are extremely adorable. They have big, baby-like eyes and beautiful soft fur that just begs to be petted, but one touch could be your last.

As Kayan lorises are nocturnal, they were not studied closely until recently. They are the only known venomous primates and have very toxic bites. Their venom will cause anaphylactic shock and kill if left untreated.[1]

They live in the central-east highland area of Borneo and are named for the Kayan, a major river there. They are also an endangered species. The discovery of this new species suggests that more are yet to be found in the Borneo jungles and on the surrounding islands.

However, human activity threatens much of this territory. So the possibility that more slow loris species exist raises important questions about conservation. 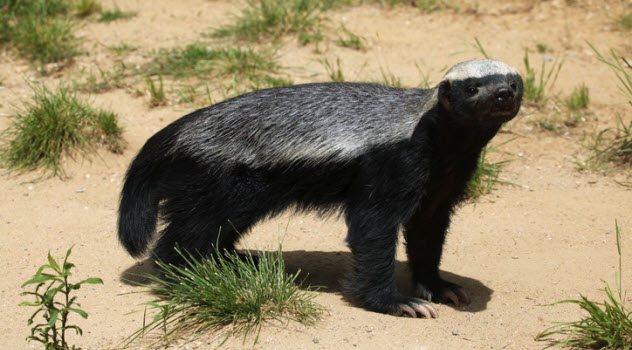 The honey badger looks like it could be related to a cute little skunk. Don’t let its size fool you, though. It is a vicious, small carnivore that lives in the deserts of South Africa and Botswana. It has a reputation for being the most fearless animal in the world.

These animals are about the size of a small dog but have been known to eat crocodiles, antelope, and venomous large snakes such as cobras and black mambas. Honey badgers will dig into burrows after prey and climb tall trees to raid a nest of baby birds.[2]

Not much will readily tangle with these dangerous predators. Lions, spotted hyenas, and leopards tend to kill only older and weaker honey badgers. 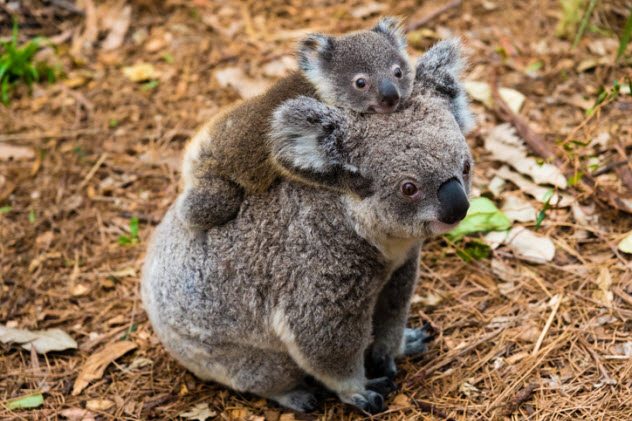 Everyone knows how adorable these animals are. However, contrary to popular belief, koalas are not bears. They are marsupials, which means that the young grow in the pouch of their mother until the offspring are large enough to be self-sufficient.

Koalas are indigenous to Australia, where they live in the eucalyptus forests and survive primarily on eucalyptus leaves. Their diet does not provide them with much energy, so they sleep a lot.

This behavior makes them appear nonthreatening. However, a full-grown koala weighs 9–14 kilograms (20–30 lb) and has long, sharp claws as well as sharp teeth and strong jaws. They have been known to move quickly and attack people or dogs if they feel cornered or threatened.[3] 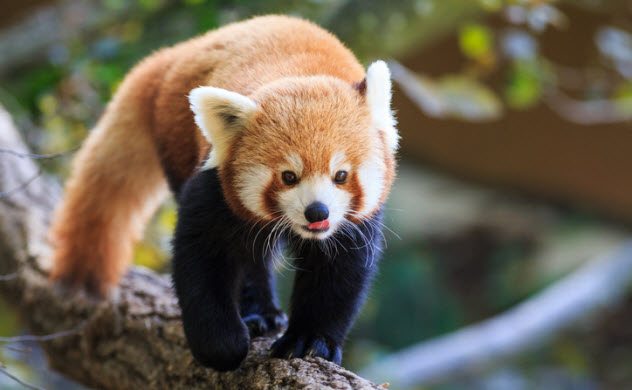 Don’t let the cute, fluffy look of the red panda fool you. This is an animal that you do not want to cuddle with. The red panda (aka firefox) is a vicious predator. It is generally solitary, but there are a couple of exceptions to the rule.

First, young red pandas grow relatively slowly, so they stay with their mothers for over a year. Second, red pandas have short relationships during the annual breeding season. When they hunt in packs, they have been known to take down and devour animals much larger than themselves.

The average size of a red panda is around 64 centimeters (25 in) long.[4] They have razor-sharp teeth and claws that can rip through flesh like butter. In the wild, red pandas can only be found in the temperate forests of the Himalayan foothills. They rely on small patches of bamboo to survive. 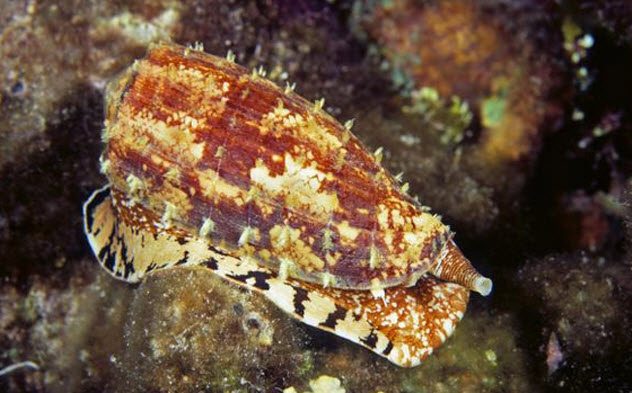 The beautiful, intricately patterned, brown-and-white shells of the geographic cone snail make them highly prized by shell collectors, but this is one snail you do not want to touch. The geographic cone is also known as Anbonia because it was discovered in the Indonesian Gulf of Anbonia.

The creature is native to the reefs of the Indo-Pacific. It grows 15 centimeters (6 in) long and has incredibly toxic venom that can cause paralysis instantly. Otherwise, its prey—small fish—would swim off to die and leave the slow-moving snail with nothing to eat.

Several humans have also died from the venom, which is a complex mixture of many toxins. In fact, of the 500 known species of cone snails, the geographic cone snail is considered to be the most venomous.

This creature delivers its venom through a harpoon-shaped tooth which is pushed out from its extendable proboscis. With no antivenin for the sting of the geographic cone, the only treatment is to keep the victim alive until the toxins lose their effectiveness.[5] 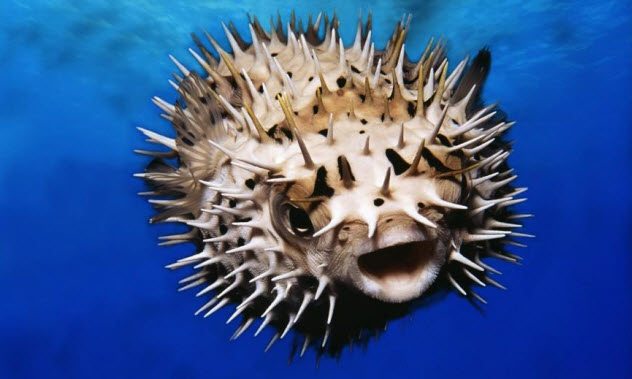 The adorable face and colorful scales of the pufferfish make them endearing to look at. They can fill their bodies with air and blow up to appear larger to ward off predators. Even though they are not deadly to the touch, they are very poisonous if eaten.

Most pufferfish contain a harmful substance that causes them to taste bad and can kill other fish. For humans, it’s even worse. The poison in one pufferfish can kill 30 human adults, and there is no known antidote.

In Japan, pufferfish are an expensive delicacy known as fugu, which must be prepared by licensed fugu chefs. Even still, there are a few human deaths every year.[6] 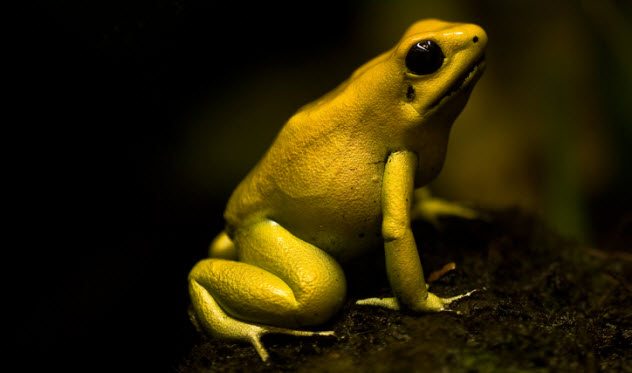 This tiny, beautiful amphibian lives in the rain forests of Colombia and is extremely toxic. At 5 centimeters (2 in) long, one golden poison dart frog contains enough venom, which is secreted from the skin, to kill 10 men.

In Colombia, the native Embera people use this venom on the tips of their blowgun darts when they go hunting. In fact, this gave the species its name. Just one touch or bite of the golden poison dart frog will cause a quick death.

The frogs’ bright colors—which range from yellow to orange to bright green—alert predators to the danger. There are over 100 poison dart frog species, but the golden poison dart frog is one of the largest.[7]

They are abundant in the small area of rain forest in which they live. However, this species is endangered due to the decimation of the rain forest. Scientists are also interested in saving this animal from extinction because the frog’s toxin may be used someday as a painkiller. 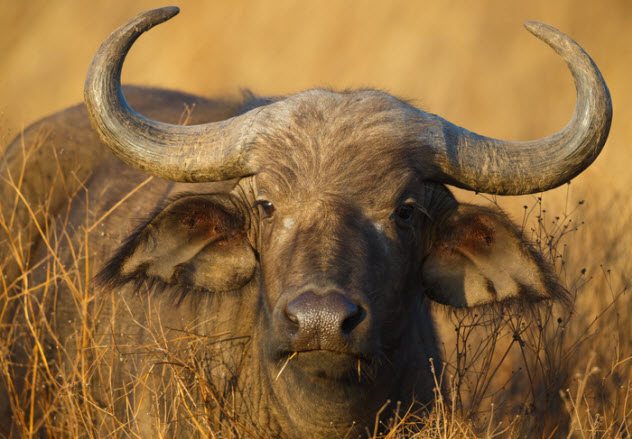 The Cape buffalo is extremely territorial and holds a grudge if you hurt it or one of its family members. These creatures live in Africa and have killed more hunters there than any other animal. With their superior memories, Cape buffalo have ambushed hunters who injured them as long as years later.

Studies by Dr. John Conde show that the strength of a Cape buffalo equals four times that of an ox. So the buffalo has the ability to turn a car on its side and kill lions. These nasty buffalo have even killed lion cubs in retaliation for an attack by an adult lion. This is one animal that you do not want to mess with.[8] 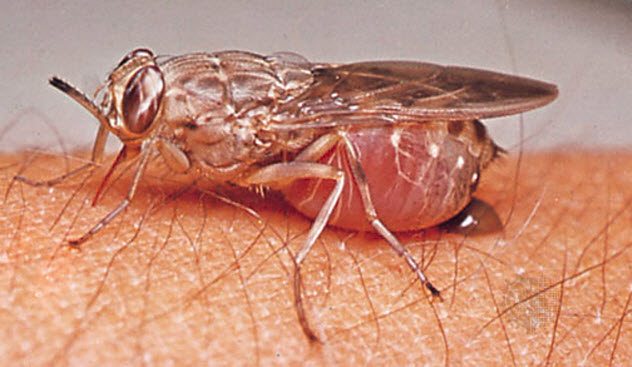 Who would have ever thought that a tiny fly could hurt you or even cause death? Well, the tsetse fly is one you definitely want to watch out for. These annoying bugs are found in Africa, and if they bite you, it can cause sleeping sickness (aka African trypanosomiasis).

Symptoms include high fever, fatigue, muscle aches, and headache. Over time, the central nervous system is affected, which causes psychiatric and sleep disorders, seizures, and coma. If not treated, the disease can also cause death.

No vaccine or medicine can prevent African trypanosomiasis. The best course of action is to prevent the flies from biting by avoiding brightly colored clothing. Wear neutral colors that cover exposed skin. You should also use sleep in an air-conditioned or screened room and use insect repellent.[9] 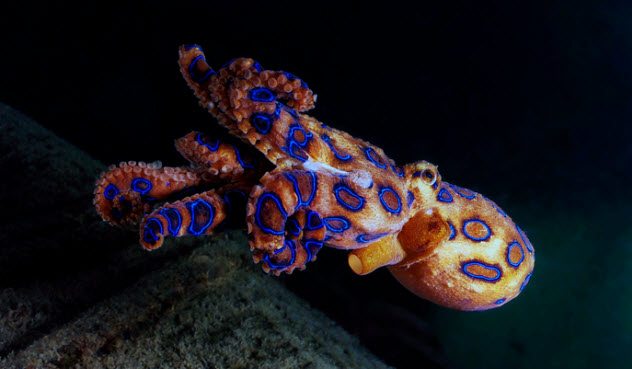 This amazingly beautiful species of octopus is considered one of the most deadly animals in the sea. The venom of a blue-ringed octopus is contained in its saliva and is similar to the deadly toxin found in a pufferfish. These octopuses inhabit the waters in Australia and the eastern Indo-Pacific and are common in areas where people like to swim.

This results in humans being bitten several times a year. The bites are so subtle that some victims don’t even realize that anything has happened. Yet.

The effects show within minutes as the victim experiences the feeling of “pins and needles” and numbness. The muscles become progressively weaker, and the victim has trouble swallowing and breathing. The person can also experience visual disturbances, difficulty in speaking, and nausea and vomiting.[10]

Sometimes, respiratory failure and paralysis can occur, which ultimately leads to unconsciousness and death.

Laura is a young 40-year-old mom who loves to write.