If you have watched The Big Bang Theory and seen the guys make fun of Bert the geologist, you may think that geology is the science of boring people staring at boring rocks. Nothing could be further from the truth.

Geology is the history of our Earth written in rock and chemical. It is a language that still humbles experts with its immensity and truth. In a heartbeat, new discoveries can dismiss long-supported beliefs and, in their place, offer the strange, the unknown, and the mind-bending changes that Earth has experienced.

There are surprises and mysteries everywhere—from the core of our planet to an offspring in space. 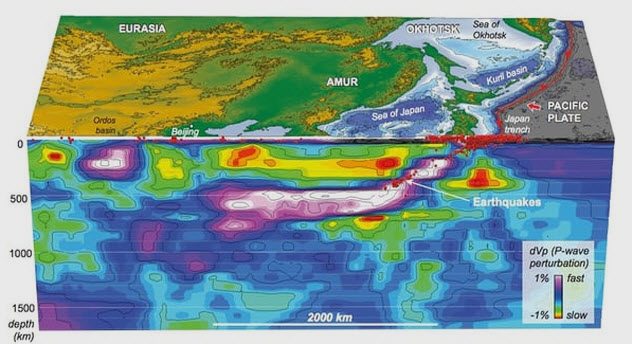 The Pacific Ocean is home to mysterious tremors. Called the Vityaz earthquakes, their origins remain unknown. The only fact that scientists can hang their hat on is that these giants are born deep, somewhere in the Earth’s mantle between Fiji and Australia.

However, one discovery could change the book on tectonic plates. During a process called subduction, continental plates wrestle until one slides under the other and disintegrates while sinking toward the core. In 2017, researchers found evidence of wayward pieces. Instead of dipping to their doom, plates slid horizontally into a part of the mantle that is waterlogged.

This “transition zone” sits 440–660 kilometers (270–410 mi) deep. Using earthquake vibrations, geologists managed to locate what they believe are massive slabs that survived for millions of years. They move in the same way as surface plates, and similarly, their interaction can cause serious shakes.[1]

In particular, a large slab was found beneath the Vityaz earthquake spots. The reason behind tectonics in the transition zone is that subduction in the Pacific happens too fast. It is so clogged that some plates ended up being forced sideways into the mantle. 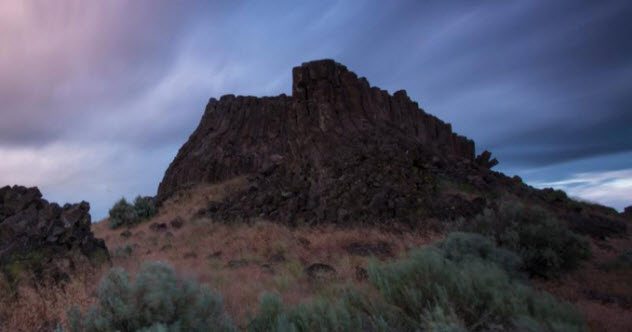 In 1909, a teacher was so captivated by the riddle behind the Channeled Scablands’ formation that he became a geologist. Located in Washington State, it includes a dry waterfall 10 times bigger than Niagara Falls. Harley Bretz studied gravel heaps as high as skyscrapers, holes in which neighborhoods could disappear, boulders in strange places, canyons not carved by rivers, and waterfalls without water sources.

His suspicions about an Ice Age mega-flood made him a leper among his peers. They could not accept that a flood shaped the land within days when accepted wisdom stated that geological changes happen slowly. They dismissed Bretz’s “Spokane Flood” in favor of processes that take millions of years.

Regrettably, Bretz could not answer where the flood originated. In the 1940s, another geologist found it. The Clark Fork River Valley was blocked during the last Ice Age, and when the dam broke, it released an unthinkable amount of water into Washington. Further research found the process repeated almost 80 times over millennia, which proved correct both Bretz and those opposing his estimate of the speed of the Scablands’ birth.[2] 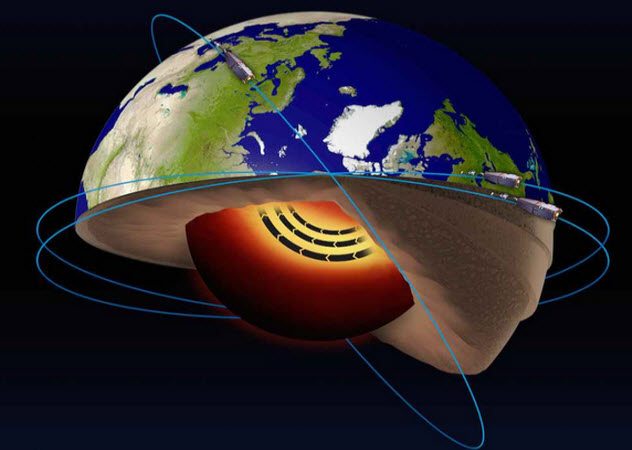 The European Space Agency launched satellites in 2013 to gather new data about the Earth’s magnetic field. Three years later, the information beamed back could almost be viewed as an X-ray of the planet.

Remarkably, inside the world’s magnetic core, scientists found a ribbon of iron. The metal is in a liquid state and behaves like an aerial jet stream. The clear view of the unusual current also helped to explain how it got there.

The core consists of different layers, and the jet stream follows the border shared between two. Most likely, fluid came from both directions and collided into a sideways journey.

The molten stream is not idle, either. Every year, it flows approximately 40 kilometers (25 mi) and, for the time being, is heading west. It moves three times faster than the average speed of the core’s outer layer, also made of liquid iron, and thousands of times faster than the tectonic plates. The satellite data also revealed that its movement was the reason behind the changes in Earth’s magnetic field.[3] 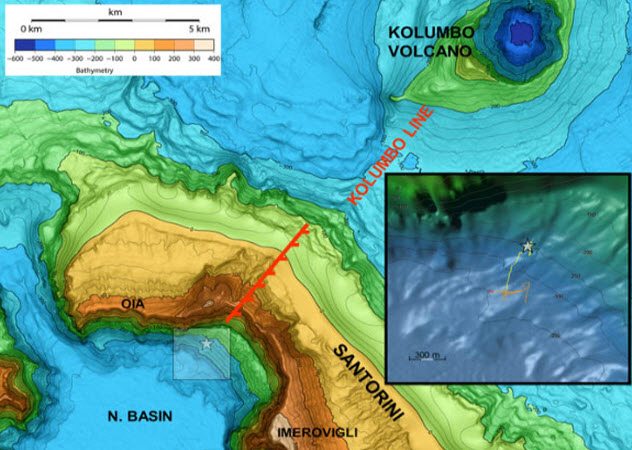 Researchers call them Kallisti Limnes, ethereal disks of fluid found underwater. Seen for the first time in 2015 at the Greek volcano of Santorini, the subsea pools get their color from opal particles. But they are made of much stronger stuff—carbon dioxide. The high concentrations may provide a way to track future volcanic trouble.

Santorini holds the dubious honor of having destroyed Minoan civilization after an eruption in 1600 BC. The rarity of the phenomenon is also striking. To form a pool under the ocean, something denser than seawater is needed. Other underwater pools in the sea consist of brine. The Kallisti Limnes are the only ones weighed down by carbon dioxide.

This changes the way scientists believed the gas behaved within the ocean. Previously, it was thought to disperse as soon as it was released into the water through geological activity. Instead, inside Santorini’s caldera, it formed the 1–5 meter (3–16 ft) diameter pools that stay separate from the sea even at a depth of 250 meters (820 ft).[4] 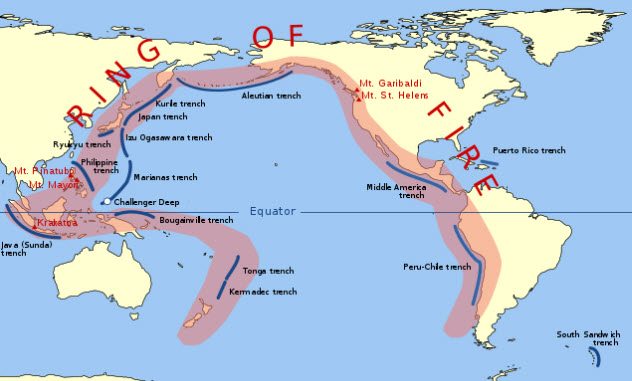 The Ring of Fire is the cradle to some of the modern world’s worst tsunamis. As if this earthquake hotbed is not scary enough, the biggest open fault runs through it. The deepest point in the ocean (outside of a trench) is the Weber Deep. Found near Indonesia, the seafloor dips into a chasm 7.2 kilometers (4.5 mi) deep.

To solve the enigma of how it formed, underwater maps gave researchers the first clue. The bottom revealed countless scars in the shape of straight parallel lines. Matching results on a simulator hinted that a Belgium-sized fracture tore the Weber Deep into existence. More remarkably, the simulation suggested the event left behind an open fault measuring 60,000 square kilometers (23,166 mi2).

In 2016, researchers visited the fault, which they called the Banda Detachment. Until then, it had only existed in theory. Upon arrival, they were stunned to see parts of the Banda Detachment visible above the waves. The fault can trigger hazardous earthquakes if it slips. But on the flip side, it may help geologists predict tectonic movements in the Ring of Fire with more accuracy.[5] 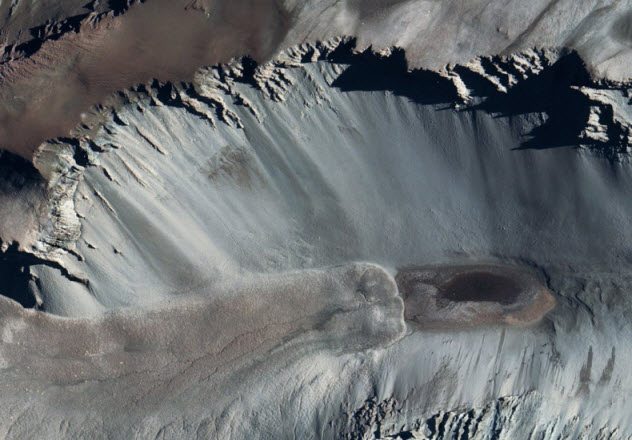 This romantically named pond divides scientists. Found in Antarctica in 1961, it refuses to freeze even at -50 degrees Celsius (-58 °F). The pool is inches deep with water like syrup. Don Juan contains some of the world’s saltiest water, which explains the thickness and ability to stay liquid. That is where scientific understanding and agreement end.

Since the feature sits in a region similar to Mars, the pond’s mystery could explain more about the Red Planet’s environment. The key is to locate the unusually pure salt source. The assumption was that the pond had a deep underground source. A 2013 study challenged this after photographing the water flow around the site at different times. It suggested that snowmelts deposited the soil’s salt in the pool.

A 2017 study returned to the deep source theory by using computer simulations to show that Don Juan’s chemistry would be nearly identical to the groundwater’s estimated mix. Both camps lack hard evidence because testing is restricted at the protected area.[6]

If the source is indeed underground, the site cannot add anything to the Mars project. The Red Planet is too frigid to have anything similar. 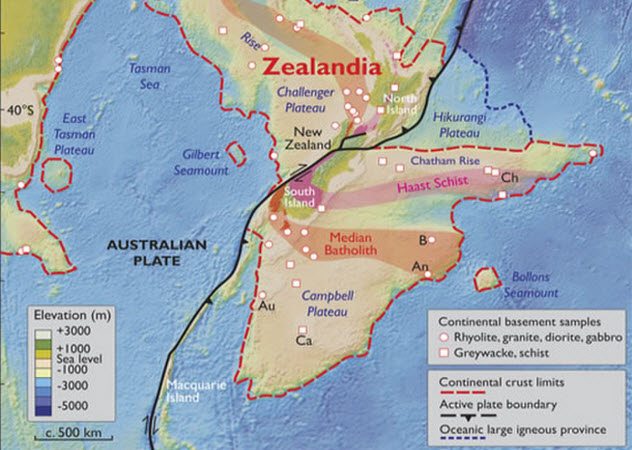 A group of geologists want to change the world map by adding an eighth continent called Zealandia. About half the size of Europe, it is mostly submerged. But some of the dry peaks include New Zealand and New Caledonia.

The echo of a lost landmass is not new. For decades, something was very familiar about this feature in the Pacific Ocean. There are continental shelves, a dramatic spectrum of altitudes, and rock samples that do not match the surrounding seafloor.

Instead of yielding basaltic rocks, which is fairly young in geological terms, Zealandia’s crust produced the hallmark ancient stones of a continent—limestone, sandstone, and granite. Most telling is a ribbon of oceanic crust between Zealandia and Australia, a sign of separate continents.[7]

Everything supports the notion that Earth has another major landmass. Zealandia sunk millions of years ago because the crust stretched when it detached from the supercontinent Gondwana. Had it not thinned, Zealandia would have floated like the rest of the continents. 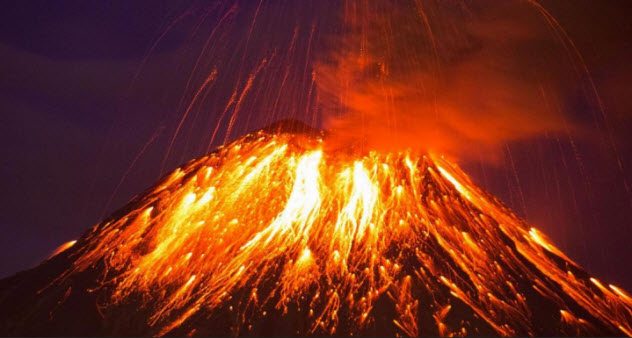 In 1465, the people of Naples thought they were witnessing an eclipse. The strange darkness was just the start. In Germany, heavy rains opened graves, and in Poland, boats navigated the streets. Floods destroyed entire villages. Within four years, Europe entered a mini Ice Age.

The weather came from a historic volcanic eruption. It was so epic that the ash cloud blanketed the world, blocking the Sun’s warmth. Although this volcano was more powerful than the 1815 Tambora eruption, which blew with the equivalent of over two million atomic bombs, geologists cannot find it.

For a while, the Kuwae volcano in the South Pacific looked to be the one. But the volcano was much smaller than Tambora. In 2012, Antarctic ice core samples showed that Kuwae’s ash deposits were dated before the mega-eruption that froze Europe.

The 15th-century disaster was also found in the ice. Surprisingly, it had been caused by two eruptions. The ash layer for the earliest was dated to 1458, a few years before the Naples “eclipse.” While the pair likely destroyed themselves and sank, they hailed from somewhere in the tropics. The right atmospheric conditions exist above the tropics for ash to spread and stay airborne for years.[8] 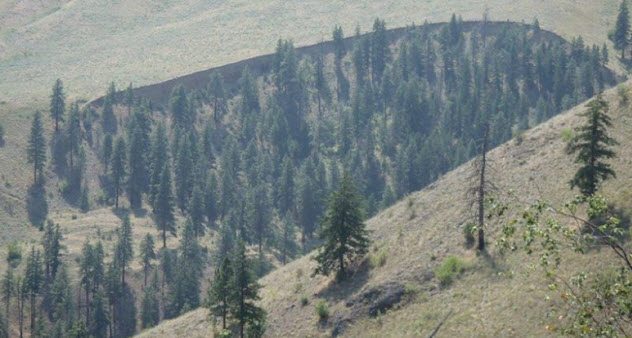 Central Washington State is relatively stable in geological terms. Yet, a town called Entiat has experienced hundreds of quakes in the last century. In 1872, the region shuddered from a giant earthquake with a magnitude around 6.5–7.

In 2015, researchers trying to solve the continuous cluster in Entiat heard about an interesting discovery. Previously, nobody had known the exact location of the 1872 earthquake, but then its fault scarp was found in Entiat. The mysterious shakes suddenly looked a lot more like aftershocks, despite occurring 145 years later.

Although not fully understood, long-lasting aftershocks are not new. Only around 10–20 cases exist, and not all of them are confirmed. The Entiat quakes had all the expected hallmarks of aftershocks.[9]

A resident who lived 20 kilometers (12 mi) from the fault scarp counted 64 during the seven hours that followed the earthquake in 1872. This matched estimates calculated by the researchers. Historical accounts of the area after 1900 and more accurately documented quakes since 1976 also fit the aftershock pattern.

Since the Entiat quakes continue, they rank among the oldest to still do so.

1 Earth Was Once Vaporized 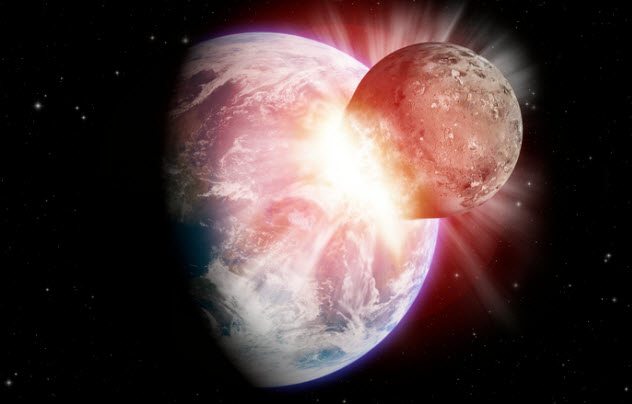 The most accepted theory behind the Moon’s birth may no longer be valid. It states that a protoplanet called Theia destroyed itself during a collision with Earth and the Moon formed from the debris.

A comparison between terrestrial and lunar rocks revealed a more dramatic story. Chemically, the samples were nearly identical. This made the Theia theory unlikely. Previous research estimated that up to 80 percent of the Moon was Theia leftovers. The chances of Earth and the protoplanet having the same composition was close to impossible. The Moon’s material came from Earth’s mantle (the layer outside the inner core).

For this to have happened, a massive impact had to vaporize Theia and most of Earth, which expanded into a superfluid disk about 500 times larger than it is today. Most of the dense gas rained back on Earth, but from it, the Moon also emerged.

Since Moon rocks are slightly richer with potassium-41, it gave more detail into the satellite’s formation. The isotope is a positive indication that the Moon began as a cloud and compressed into its shape under immense pressure.[10]