As the fifth-largest continent, you would think that the secrets of Antarctica would be widely known. However, this is not the case. Few know anything worth knowing of the cold continent, but this list is here to change that.

Far more than just a frozen land of penguins, the frigid continent features more than you might imagine, and there’s even more than that hidden beneath its ice sheets. Antarctica has plenty of delicious content, all told here. 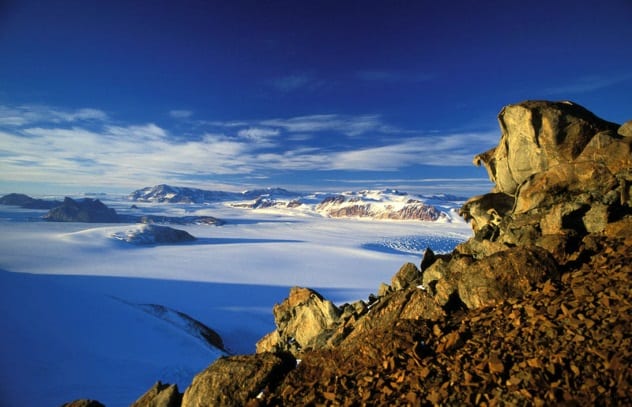 Given that Antarctica is around 1.5 the size of the United States, there is quite a lot of land to divide. This continent is divided into two regions: East and West Antarctica. The former is the larger of the two regions, taking up two-thirds of the continent. There are even actual mountains in Antarctica that do the dividing; the Transantarctic Mountains. These mountains are one of the longest mountain ranges in the world.

Back in the Mesozoic era, though, this divide didn’t exist. Scientists have discovered fossils and other evidence that leads to the conclusion that Antarctica used to be densely forested and full of animals! Heck, even dinosaur fossils have been discovered there. Wild, right? Now, this would have been anywhere from 252 million to 66 million years ago, but parts of Antarctica used to run lush with trees. No icy division in sight.[1] 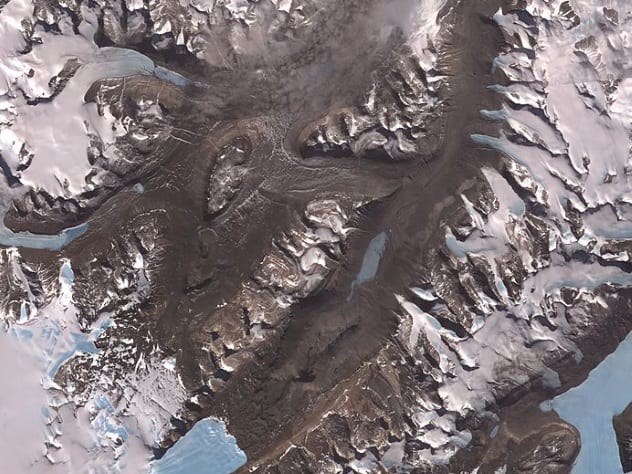 In order to get out of the desert category, Antarctica would have to receive more than 50 centimeters (20 in) of precipitation a year. However, Antarctica only receives 5 to 15 centimeters (2–6 in) a year. Ouch! What makes Antarctica so different from other deserts, though, is that the rain doesn’t soak into the ground—the snow just piles on top of itself. Antarctica is dry—really dry. The Dry Valleys of Antarctica (pictured above) are the driest place on Earth and haven’t seen rain or snow in two million years!

Antarctica is the windiest place on Earth, as well. Some of the winds reach up to 320 kilometers per hour (200 mph)![2] How’s that for a breeze? Stranger yet, the continent stores around 70 percent of the planet’s fresh water, despite being the driest of them all. Antarctica is clearly the most contradictory continent out of all of them, don’t you think? 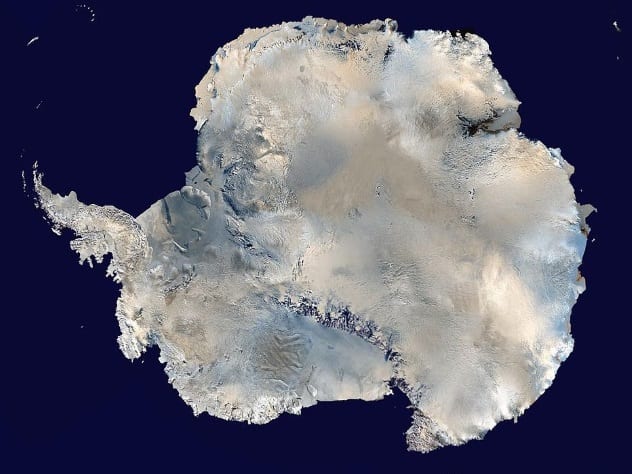 Although few people live in Antarctica other than scientists, the cold continent has labeled maps nonetheless. While most maps are obtained by satellite, areas of Antarctica have been visited so that cartographers can map out the freezing continent in person. In fact, the maps are so detailed that you could even ask for directions with them. Looking for the South Pole? You’d find that in East Antarctica. On the other side of the Transantarctic Mountains is the Ross Ice Shelf, which happens to be the largest shelf in Antarctica. It’s about the size of France.

Some of the seas surrounding Antarctica are given names like Weddell Sea. Or the Bellingshausen Sea. Or the Ross Sea. There are even the Amundsen Sea, the Davis Sea, and the Scotia Sea. There’s also Pine Island Bay. However, we aren’t likely to go swimming in the freezing water anytime soon, so don’t get too excited.[3] 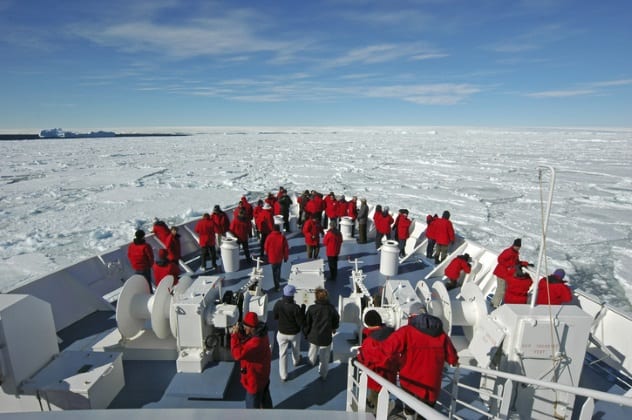 On December 1, 1959, the Antarctic Treaty was signed by 12 nations. The treaty banned military activities on the continent to avoid international discord. The treaty has since grown to 53 parties. Nonetheless, it all started when the continent was first sighted in 1820. Back then, sailing through the Southern Ocean was difficult for the wooden hulls of ships, so Antarctic travel certainly wasn’t all that popular. It wasn’t confirmed as a full continent rather than just a chain of islands until 20 years later. An American seal hunter by the name of John Davis claimed to have landed on Antarctica in 1821, but a number of historians doubt this.

Nowadays, if someone is dying to visit Antarctica, they can do so through expeditions like National Geographic or Lindblad. That’s about all you can do, though—the Antarctic Treaty forbids military training, mining activities, and nuclear waste and explosions on the continent. However, Chile has a village in Antarctica outfitted with a school, post office, hospital, and hotel and even has TV and cell phone service. Vacation, anyone? However, don’t expect to have huskies pulling you on a sled—they have been banned since 1994. No non-native animals are to be brought to the continent.[4] 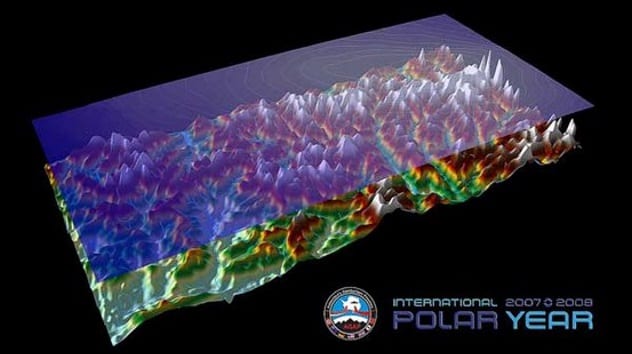 They are called the Gamburtsev Subglacial Mountains. And they are under Antarctica. Specifically, they’re buried under 600 meters (2,000 ft) of ice, on average. The maximum depth of the ice has been pegged at a staggering 4,800 meters (15,570 ft). Their peaks rise to heights of around 2,700 meters (8,900 ft), and they range 1,200 kilometers (750 mi) across the underbelly of the continent. On the other hand, or other direction, the highest point aboveground in Antarctica is Mount Vinson, with an elevation of 4,892 meters (16,050 ft).

There are lakes underneath Antarctica, as well. Lake Vostok is one of the world’s largest subglacial lakes. It is buried beneath 3.2 kilometers (2 mi) of ice. Lake Vostok rivals Lake Ontario in size. Researchers have mapped the lake’s shape with remote sensing techniques. Scientists believe this lake is rather young, perhaps just thousands of years old.[5] 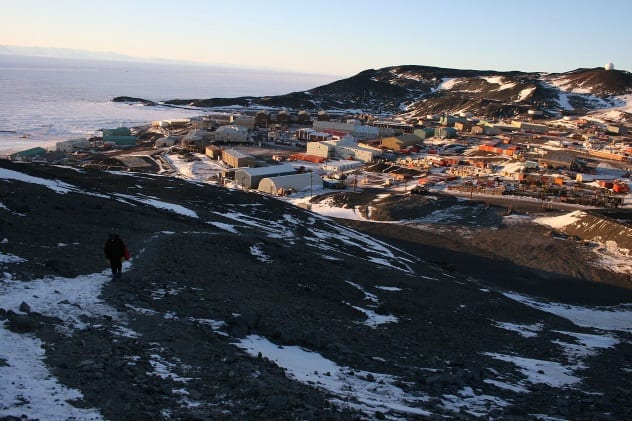 There are roughly about 70 to 80 permanent research facilities representing 30 countries in Antarctica. The biggest facility, McMurdo Station, the main American base, can hold up to 3,000 people during the summer. (Other sources peg the summer population at only around 1,200.) According to people who have spent time there, the ground is made of volcanic dirt, the weather is foggy, penguins are nowhere to be seen, the facility is ugly, and the inside isn’t much better. However, these facilities are greatly needed, as scientists use them to learn new things about the planet every day.[6]

Despite the Antarctic Treaty, Argentina sent a pregnant woman to the continent as part of their effort to claim a portion of the land. (What would they do with it, anyway?) They did not get their claim, but in January 1978, Emilio Marcos Palma became the first person to ever be born in Antarctica. If there are residential research facilities in Antarctica, then surely there can be a residential community, too, right?

Since Emilio Palma’s birth, only ten people have been born on the continent, but who knows? If scientists ponder colonizing Mars, we could definitely colonize Antarctica. There are already at least seven Christian churches, 40 airports, and even an ATM there. Let’s do it.

Fun fact: You cannot work in Antarctica unless your wisdom teeth and appendix have been removed. 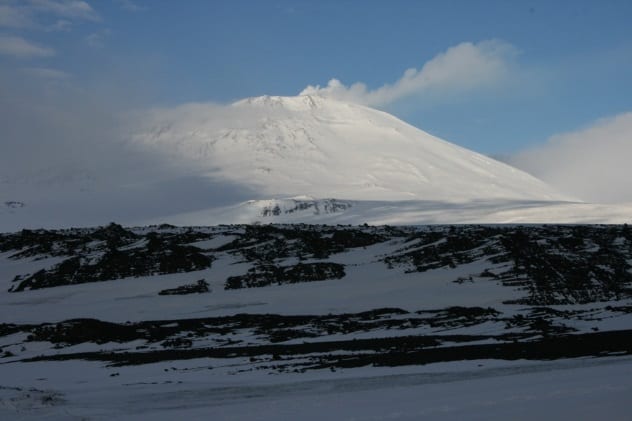 Antarctica does seem to have a little bit of everything, don’t you think? Well, get this: It even has an active volcano.[7] That would be Mount Erebus, which also holds one of Earth’s few long-running lava lakes! It’s also the southernmost active volcano in the world. Antarctica has at least 138 volcanoes, and there are probably more.

The continent also features a famous waterfall that runs red! If you saw a picture of it, you’d think it was blood running down the ice. (It’s not.) There are plenty of strange phenomena over in Antarctica. 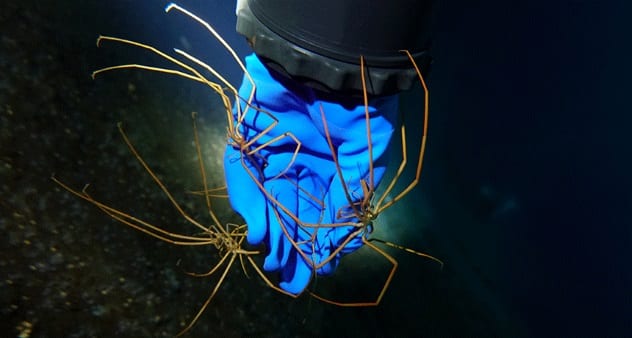 Antarctica is the only continent without reptiles. Is that a bad thing or a good thing? Of course, no one wants to get bitten by some creepy, frozen ice spider, but frozen geckos would be cute. There is, however, a “spider” that does exist in Antarctica, but it won’t bite you. They might be the size of dinner plates, but they are sea spiders, so as long as you don’t go in the water, you’re fine.[8] (And as implied above, they’re not actually arachnids.)

Mainly, Antarctica is home to seals, whales, fish, penguins, and other birds. There are no indigenous human populations in Antarctica, but nonetheless, it’s occupied year-round by researchers.

In Lake Vostok, scientists have discovered microbes that suggest creatures in the lake are living in an ecosystem based on chemicals within rocks, rather than sunlight. The organisms that were found reportedly derive their minerals from underlying bedrock. 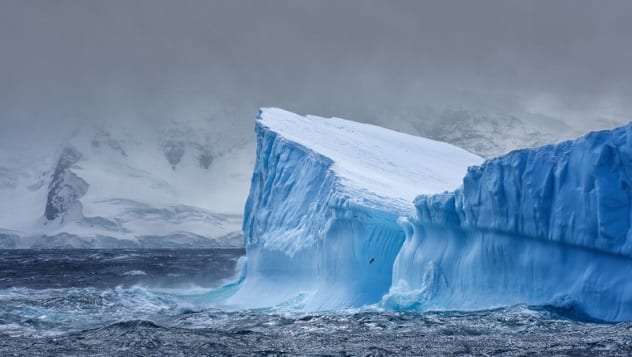 If anything is for sure, it’s that we don’t want Antarctica’s ice to melt. That would mean colossal problems for us. However, the glaciers have already started to melt, thanks to climate change. Ice melting has even caused a small shift in gravity within the region—who knows what else Antarctica could do?

Scientists say that if all of Antarctica’s ice melted, sea levels would rise as much as 60 meters (200 ft).[9] Already, the sea levels across the world are rising ominously, which worries scientists that we will soon have to say goodbye to portions of New York, Florida, and the Caribbean, among other places. That’s why it is so crucial that climate change is acknowledged and slowed. In the somewhat near future, Earth could become a water world.

According to NASA, Antarctica is warming at about five times the rate of the rest of the world. That is . . . dangerous. 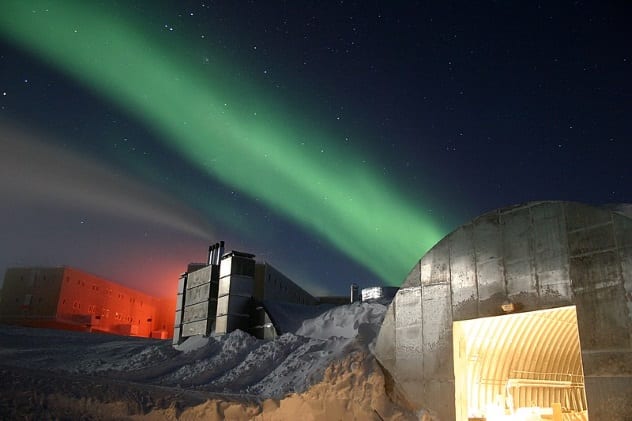 If you’re thinking of moving to this chilly paradise, do note that temperatures are frequently below zero. They can dip to around –90 degrees Celsius (–130 °F). On the other hand, a temperature of 15 degrees Celsius (59 °F) has been recorded, albeit during the summer on the Antarctic Peninsula. (It’s usually below freezing there, too.)

And Antarctica doesn’t have a set time time zone! Ditch your watch. Even better yet, the seasons are warped, too—the continent remains dark throughout the winter, and during the summer months, the Sun never sets, due to the Earth’s tilt. Wow. It’s jet lag’s favorite continent.[10]

However, if you are a scientist looking to study adaptation, Antarctica is the place for you. In 2013, scientists discovered that emperor penguins’ feet stay warm by having blood vessels that are wrapped around each other and that the penguins also have the ability to adjust the amount of blood flowing to their feet to respond to a change in foot temperature. That is just one study—where will your study take you?

A long-time writer, but I’m new to Listverse and already loving it. A wise scholar with an brilliant imagination, you could call me, even though I have an Instagram fanpage @theglitteringbook for my favorite series where us fangirls just scream all the time. I live in Florida, but I’m originally from the Caribbean, though I’d prefer to be living somewhere in the UK.

Read more about our planet’s frigid southern continent on 10 Extraordinary Creatures Of Antarctica and 10 Fascinating Wonders Of Antarctica.