The world of puppies is not restricted to playpens and looking adorable. In recent years, several have made history by just being born. Pups are also handpicked for careers like beetle sniffers or police dogs (because they are clones of the police force’s best dog).

Additionally, charities continue to rescue the offspring of Chernobyl’s abandoned dogs while law enforcement struggles to keep up with drug dealers and burglars wanting puppies for the wrong kind of profit. 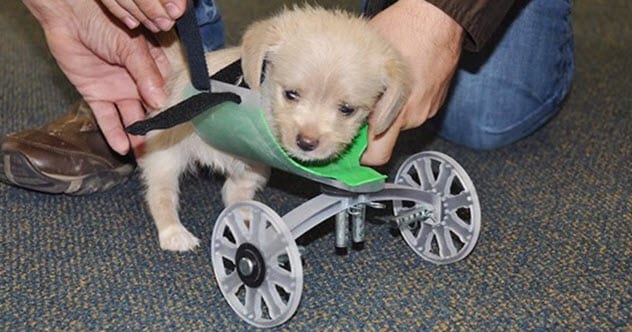 When a litter of puppies was born in 2015, one male was very different. He came into the world healthy and cute, but his two front legs were missing. For some reason, they just never developed.

Despite what most would view as a major physical challenge, his caregivers decided not to euthanize the newborn pup. He was named Tumbles. When the terrier-beagle mix was six weeks old, it became time to make him a little bit more mobile.

In Ohio, Friends of the Shelter Dogs decided that he could do with some wheels. They worked with the Ohio University Innovation Center and designed a small wheelchair to fit Tumbles. After the custom-fit device was 3-D printed, the fluffy puppy was strapped in and he took his first real steps.[1] 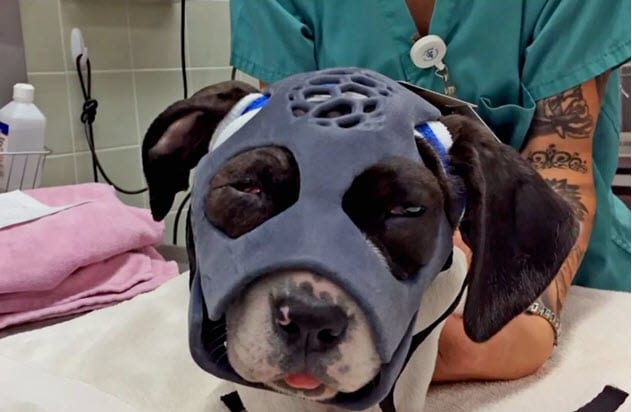 In 2017, a puppy named Loca had a bad encounter with another dog. The Staffordshire bull terrier, which was around four months old, suffered severe bite injuries to the head and neck. She was rushed to the University of California Davis School of Veterinary Medicine.

The puppy was diagnosed with a fractured jawbone, cheekbone, and severely damaged jaw joint. The effort to heal the pup involved veterinarians as well as engineers. Before Loca’s incident, the vet school worked with the UC Davis College of Engineering to create a very special mask. Called the Exo-K9 Exoskeleton, it is the future of treating facial fractures in pets.

Like a human cast, the Exo-K9 mask works by holding the healing bones in place. However, the mask is 3-D printed to fit each dog’s unique skull shape. A CT scan measured Loca’s head, and the resulting exoskeleton marked the first time that the invention was used on a patient. Within a few months, the staffie’s injuries were on the mend.[2] 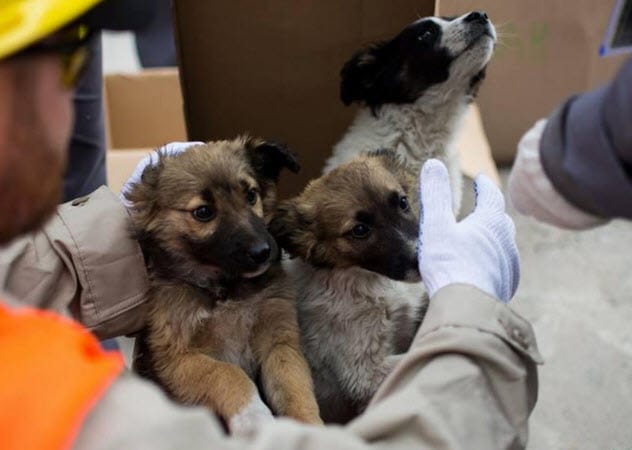 In 1986, the world watched in horror as the greatest nuclear disaster unfolded at Chernobyl. The Ukrainian nuclear power plant melted down and forced workers and locals to flee. Authorities loaded residents onto buses but brutally kicked off any dogs that desperately tried to follow their owners.

Knowing what would probably happen, many owners left written pleas for the military not to kill their animals. However, soldiers went into the disaster zone and shot any animals they could find. People could be extracted, but the authorities had no time for pets and livestock that might be contaminated.

Remarkably, some dogs survived the radiation, soldiers, wolves, and wilderness. They formed packs and raised puppies. Today, hundreds of dogs roam the area and even live inside the power plant.

In recent years, a charity from the United States stepped in and sterilized hundreds of strays. They also captured the first 200 wild puppies in 2018. The pups were quarantined and prepared for adoption in the United States.[3] 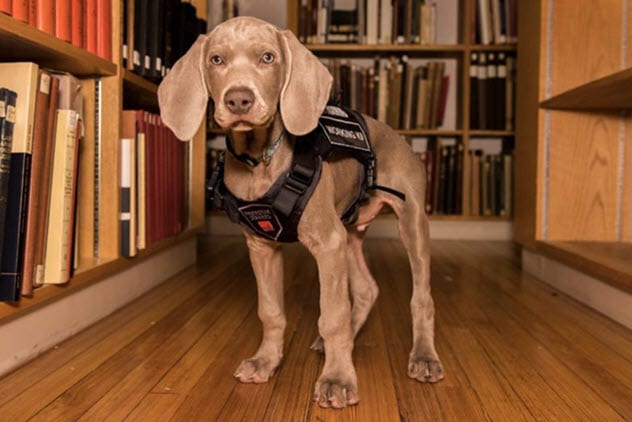 Museums arrange display cases, do research, and wage war with insects. The latter are a silent but devastating problem. Bugs do not care whether artifacts are irreplaceable. They just want to munch on wood, paper, and textiles.

The Museum of Fine Arts in Boston has several protocols in place to battle bugs. In 2018, they acquired another method—and it attracted more attention than some of their art collections. Riley the puppy was not only adorable but also had a weird duty—inspecting incoming artifacts for unwelcome hitchhikers.

The Weimaraner’s training as the “new stuff inspector” would enable the pup to sniff out moths, beetles, and other pests. Should the silvery canine catch a whiff of something, he’ll sit and alert staff to inspect the item more closely.

Weimaraners make excellent drug sniffers or bomb detection dogs, but it is up to Riley to show the world if the breed is suitable for insect inspection as well. If that is the case, more museums could get their own pups.[4] 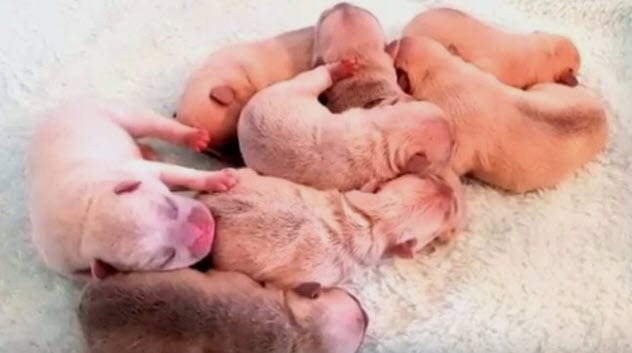 In 2018, several men broke into a Manchester residence. It was not a random crime. They knew exactly what they wanted. They found the owner, Leeanne Corbett, at home and demanded the family’s French bulldog puppies. As her three children were present and one robber held a knife to her pregnant stomach, Corbett did not dare resist.

The robbery might have been successful, but the thieves’ idiocy was sparkling. A living French bulldog puppy—emphasis on “living”—can sell for over £1,200 (about $1,500). Instead of waiting until the litter was weaned, they stole the pups at just a day old.

The eight bulldogs had been born four days premature and were inside an incubator, which was also stolen. Several days later, somebody dropped the litter off at a veterinary clinic. Sadly, six puppies had died. Corbett believed that the robbers saw her Facebook post announcing the birth and decided to steal them.[5] 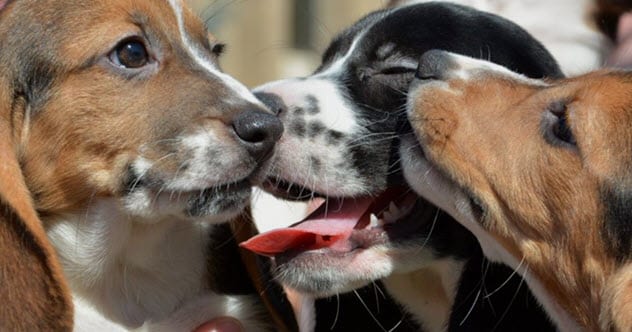 In vitro fertilization (IVF) may be old news with humans, but the fertility technique produced the first litter of puppies in 2015. It could be excused for sounding a bit dull, but this is a great achievement. Researchers have failed since the 1970s to produce such pups.

The recent attempt had to overcome tricky obstacles. Researchers had to carefully harvest eggs at the right time and prepare the sperm for fertilization, something usually done by the female tract.

Using donor material from beagles and cocker spaniels, 19 embryos were created in the laboratory. After being implanted in a surrogate mother, only seven reached full term.

The research was not merely about proving that doggy IVF was possible. Now that the kinks have been ironed out, the technique can be applied in animal conservation. More pups from endangered canine species and rare dog breeds can be born this way than with natural breeding.[6] 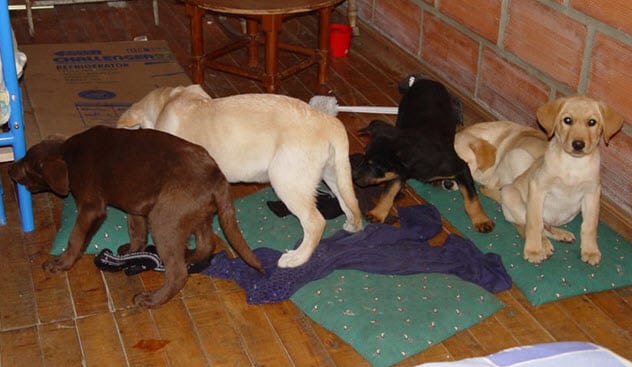 Some people exploit puppies’ cuteness in the worst way. In 2005, Andres Lopez Elorez fled when around two dozen alleged drug traffickers were arrested in Colombia. He was a veterinarian who worked for the Colombian drug ring.

His role was horrific. Elorez was tasked with preparing puppies to be drug mules. The pups were implanted with liquid heroin and flown to New York on commercial flights. Upon arrival, the drugs were fatally cut from the animals’ abdomens.

Elorez evaded the law for 10 years. But in 2015, he was captured in Spain. The 38-year-old veterinarian was extradited to the United States to face trafficking and conspiracy charges. It remains unknown how many puppies died as Elorez’s drug mules. Ironically, in the initial 2005 raid, 10 puppies were found and one became a narcotics dog in the Colombian police force.[7] 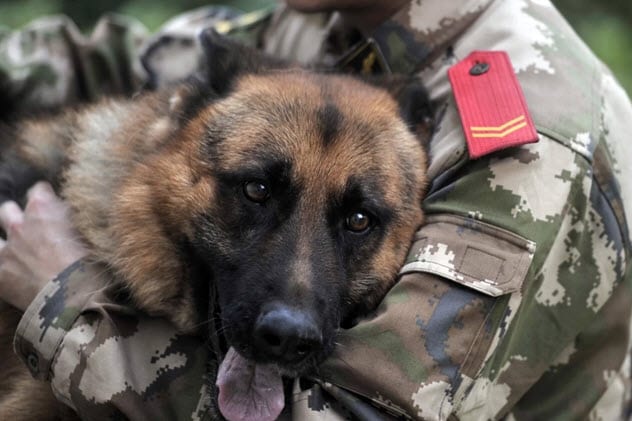 In December 2018, a puppy was born in China. She took her first breath in a Beijing laboratory and was given the name Kunxun. Little Kunxun was a Kunming wolf dog. As the name suggests, they are wolf-dog hybrids and are favored by the police and military.

When the pup turned three months old, she outperformed all others on aptitude tests. It was exactly what her creators had hoped for. Kunxun was a clone. Her “mother” and 99.9 genetic match was a sniffer dog called Huahuangma. The seven-year-old’s nose helped crack several murder cases and made her the pride of the Yunnan Province police.

To train a police dog in China takes five years and around $60,000. Should the pup show Huahuangma’s brilliance, those five years could see a drastic reduction. Indeed, Kunxun’s progress predicts that she would finish her education in drugs and crowd control within 10 months. If Kunxun excels, the project could lead to the mass production of puppies from high-performance cop dogs.[8]

Couple Gets Two Puppies After Spending $100,000 To Clone Deceased Dog

In 2015, a boxer named Dylan passed away. His devastated owners approached a unique pet cloning company in Korea. Sooam Biotech Research Foundation had already churned out over 700 copies of people’s pets, but Dylan’s case was different.

The limit for extracting DNA from the donor after death was five days. The boxer had been dead for nearly two weeks. When the British couple plonked down £67,000 ($100,000) per procedure, Sooam gave it a shot.

The company made history when they managed to make two surrogates pregnant, each with a single puppy. Dylan’s owners were present to view the birth of the first via Cesarean section. They wanted to welcome the second pup, too, but the little boxer surprised everyone by arriving a day earlier than expected.

His natural birth went fine. Everyone was happy except the RSPCA. The cloning of pets remains controversial. Such animals have a higher risk for health problems. Cloning also involves painful procedures and high death rates before scientists can replicate a viable clone.[9] 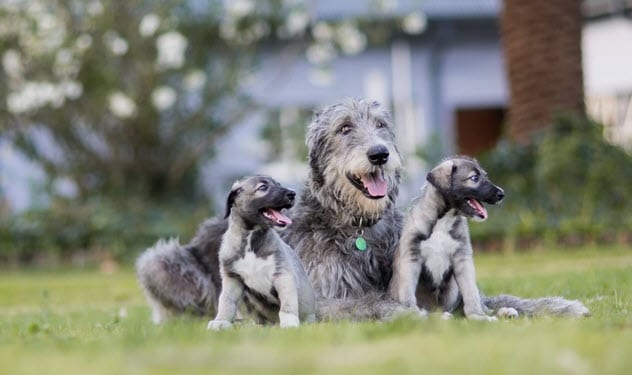 In 2015, a South African family noticed that their dog was struggling to give birth. The Irish wolfhound was admitted to Kurt De Cramer’s clinic for a Cesarean section. As he started the procedure, De Cramer noticed a bulge in the uterus. He removed a puppy from the bump. To the vet’s surprise, another sibling sharing the firstborn pup’s placenta.

In humans, this denotes identical twins. Suddenly aware of what he was looking at, De Cramer had his assistants photograph the twins while they were still connected to their placenta. In the meantime, he delivered five more puppies (each with its own placenta).

Although the vet believed that the two pups were twins, others were not so sure. Identical twins are supposed to be mirror images, but the two pups’ white markings were not the same.

However, when they were two weeks old, blood tests and gum swabs confirmed that they were the first identical twin dogs. Their unique white hair could be due to minute genetic differences.[10]

Read more strange facts and stories about dogs on 10 Weird Facts About Dogs and 10 People Killed By Their Dogs.