Witchcraft and magic are nebulous and often dangerous concepts. For much of human history, anyone who has seemed to have uncanny powers has either been hailed as a holy person or put to death as a demon.

When some people achieve success, it is deeply galling to their enemies. The only way those individuals can have reached the top is with witchcraft! Here are 10 times that famous people throughout history have been accused of witchery. 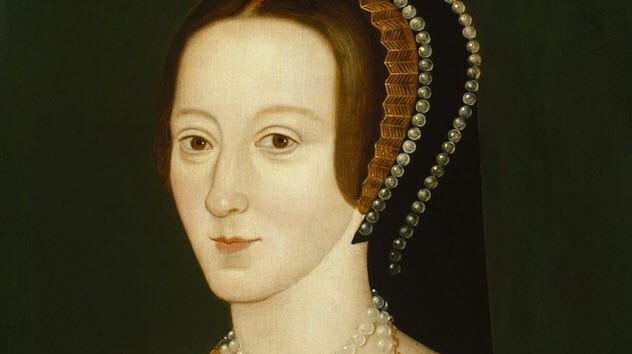 Few people have had as great an effect on British history as Anne Boleyn. When the marriage between Henry VIII and Catherine of Aragon failed to give the king the male heir he desired, he felt that God had cursed him for marrying his brother’s widow.

Already, the king had strayed from his marriage vows and fathered a number of illegitimate children. So he believed he would be able to produce a prince to follow him if he had a different wife. That new wife was Anne Boleyn.

When the Pope of the day refused to annul Henry’s marriage to Catherine, his beloved Anne encouraged him to break with Rome and proclaim himself head of the Church in England. From this act came England as a Protestant nation amid the destruction of the monasteries. Anne was wed and made queen. All was going according to plan.

When Anne gave birth to a daughter and then a stillborn son, Henry again felt cursed. He began to claim that Anne had seduced him using “sortilege”—sorcery and witchcraft.[1]

The queen’s many enemies were quick to add more flames to the fire by claiming she had witch’s marks like moles and a sixth finger on one hand. Although she was never formally charged with witchcraft, the accusations blackened her reputation and quickly led to her fatal meeting with the executioner’s sword. 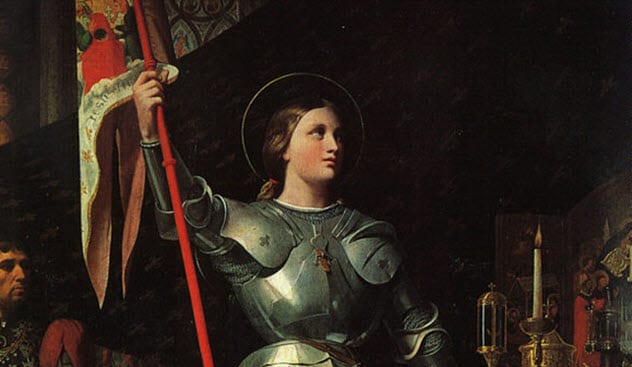 Joan of Arc achieved remarkable things in her short life. A little too remarkable for some.

Before she was 19, she had ditched her peasant robes for armor and joined an army to break the siege of Orleans. Given visions, she claimed, by saints and archangels, her advice was heeded by kings and nobles.

For her English enemies, however, she was considered an agent of evil. One described her as “a disciple and limb of the Fiend . . . that used false enchantment and sorcery.”[2]

When she was captured by Burgundians, she was given over to the English. They charged her as a heretic but used her supernatural abilities to paint her as a witch or tool of the Devil.

Accordingly, the voices that she heard were not angelic but diabolical. Her ability to recognize people she had never met before was a gift from hell. And the predictions that led to her military victories were gifts from Satan.

Found guilty of heresy, she was placed in prison as punishment because only those who were convicted twice could be put to death. It was Joan’s habit of dressing in men’s clothes that was her undoing. By wearing military garb while in prison, she had committed heresy again and so was condemned to be burned at the stake. 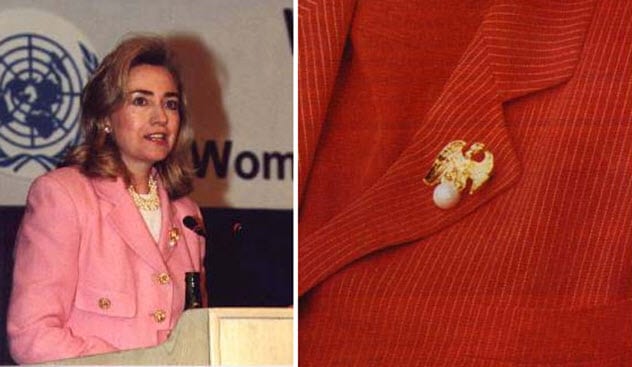 Something about Hillary and Bill Clinton seems to cause people to go witch mad. One website has a multipart series on the couple’s connections to dark forces. It accuses Bill of using Haitian voodoo to win his election, Hillary of being the Whore of Babylon, and the pair of performing bizarre rituals for their own nefarious purposes.

You might think that this was on the outer fringe of beliefs. But at the 2016 Republican convention, one attendee accused Hillary of being a member of the Illuminati and a witch. A photograph of her playfully trying on a witch’s pointed hat was taken as proof positive of her satanic associations.

Another sartorial mistake was wearing a bird-shaped brooch that either symbolized her attachment to the New World Order or was a sign of loyalty to the Antichrist.[3] Who knew jewelry could have so many meanings?

When Hillary talked about having conversations with figures from history like Mahatma Gandhi, she meant holding imaginary discussions to shape her thinking. Of course, some people took this literally and she was accused of communing with spirits.

Backmasking is a recording method where a message is put into a song that only makes sense when the song is played backwards. This has been used to hide fun Easter eggs for hard-core fans to find, like when Weird Al put “Wow, you must have an awful lot of free time on your hands” into one of his tracks. In the past, there have been people with too much time on their hands because they have found hundreds of satanic messages hidden in rock songs.

It was claimed that the Styx song “Snowblind” contained the subliminal and backwards message “Satan moves through our voices.” While Styx found the idea that they were the heralds of Satan laughable, there was enough of a backlash against backmasking that Arkansas passed a bill demanding that records with backmasking be identified as such to purchasers.[4]

Those looking for Satan in Soundgarden’s songs “665” and “667” will be disappointed. Instead, there is a backmasked song about Santa. 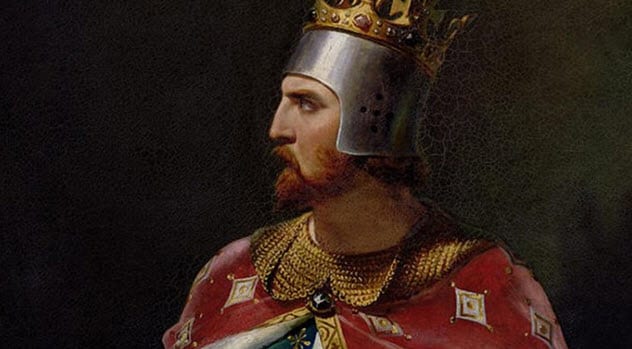 While some have claimed that the British royal family are in fact shape-shifting reptilian creatures, there is an older tale that links them to demons and witches. The counts of Anjou were one of the great noble families of France. Their might and prowess in battle led people to wonder just where their uncanny knack for coming out on top—and vicious tempers—had come from. The answer was, of course, a demon.

In the 12th century, rumors abounded that an earlier count of Anjou had married a mysterious woman. This beautiful lady always found a reason to absent herself from church and never attended mass.

One day, her suspicious husband forced her to remain for the consecration of the Host. At the holiest moment of the ceremony, she tore off her cloak, levitated in the air, and flew out a window, never to be seen again.[5]

From this count and his demonic wife came the Plantagenet line of kings. Richard I used to joke about his hellish ancestry: “We come from the Devil, and we’ll end by going to the Devil!” Who knows, there may be a drop of demon blood in the blue blood of the Windsors today.

Pope John Paul II, now a saint of the Catholic Church, is held by many to be a heroic figure of the 20th century. Some credit his stand against Communism as among his best acts.

Others have a more dubious view given the sex scandals in the Church that emerged in his last years and still blight public perception of Catholicism. And then there were those who thought he was the Antichrist.

When Pope John Paul II addressed the European parliament in 1988, Ian Paisley, a notoriously loud and vociferous Protestant, greeted the Pope by heckling his speech and declaring, “I refuse you as Christ’s enemy and Antichrist with all your false doctrine.”

While his opposition may have been more symbolic than a real accusation of the Pope, some people see occult signs everywhere around Pope John Paul II. Everything from his birth, supposedly during a solar eclipse, to his funeral rituals have been claimed as signs of his diabolic origin.[6]

It’s rare for a politician to have to begin a campaign message with the words, “I’m not a witch.” But that is what Christine O’Donnell did in 2010. It followed what some could see as a self-accusation of witchcraft.

In 1999 on the Bill Maher show Politically Incorrect, she had said:

I dabbled into witchcraft—I never joined a coven. [ . . . ] I hung around people who were doing these things. [ . . . ] One of my first dates with a witch was on a satanic altar, and I didn’t know it. I mean, there’s little blood there and stuff like that. [ . . . ] We went to a movie and then had a little midnight picnic on a satanic altar.[7]

Bill Maher later apologized for making her political run into a joke, but the damage was done. In today’s political climate, it seems that a politician can overcome any scandal except going on TV and saying that he or she is not a witch.

Since at least the 1970s, Stevie Nicks of Fleetwood Mac has been associated with witchcraft. “Rhiannon,” a song written by Nicks and recorded by Fleetwood Mac, is about a Welsh witch-goddess. Ever since its release, people have been asking the singer whether she is really a witch.

The song features lyrics like: “Rhiannon rings like a bell through the night, and wouldn’t you love to love her? Takes to the sky like a bird in flight, and who will be her lover?” What else could this mean but a witch riding a broom through the sky?

Flight did have something to do with it. Nicks saw the name “Rhiannon” in a book at the airport and wrote a story about a woman who was free as a bird. Despite this mundane explanation, people looked as Nicks’s long black dresses and decided she really was a witch.[8]

After years of denying her witchy nature, she embraced it in 2014 when offered the chance to play a fictionalized version of herself in the TV show American Horror Story where she was a white witch. 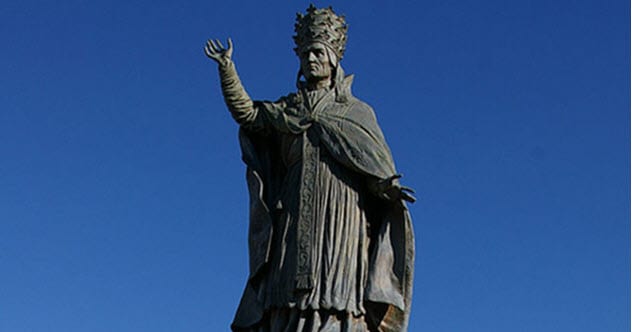 Supposedly, he sold his soul to the Devil in return for hidden knowledge. It was said that Sylvester was “the best necromancer in France, whom the demons of the air readily obeyed in all that he required of them by day and night.”[9]

The greatest achievement of his dark arts was a statue to which he would ask yes-or-no questions and always get the right answer. We are told that Sylvester traveled to Spain, then under the control of the Muslim Saracens, to study with them.

From one of their greatest philosophers, he stole a book of magical spells and learned how to sell his soul to the Devil. Using his new powers, he created his wise “brazen head” and used its guidance to rise to the papacy.

Of course, it seems more likely that Sylvester had studied in Spain with teachers who had access to knowledge unknown in the rest of Europe and that many of his colleagues saw him as compromised by this non-Christian education.

To get to the top in the music industry requires talent and a whole heap of good luck. It may also take just a pinch of witchcraft. In 2018, Beyonce was accused by a former drummer of using “extreme witchcraft” against her and conjuring spells of sexual molestation. Allegedly, the singer had also bewitched the drummer’s kitten.

The court filing of Kimberly Thompson was an attempt to get a restraining order placed against the musical icon. Thompson wrote that Beyonce’s actions led to “loss of many jobs, theft of homes, the murder of my pet kitten, magic spells on my lovers, and numerous broken relationships.”[10]

The drummer’s kitten was apparently cursed to attack her by Beyonce, a “fact” confirmed by two psychics. Thompson also said that Beyonce was able to inhabit other people’s bodies to watch the drummer have sex with others.

Perhaps unsurprisingly, the restraining order was not granted. This was either because no one turned up in court to pursue the matter or because Beyonce had once again used her magic powers to win.