It’s hard to believe, but it happened, and it was less than 100 years ago. In what was perhaps the biggest flop in US legal history, the federal government passed a constitutional amendment in 1920 forbidding the selling of alcohol. Prohibition would stand for nearly 14 long years.

While the whole thing left most people shaking their heads in disbelief, there were some pretty cool consequences of that ill-fated amendment (especially that it ended, but that’s a given). 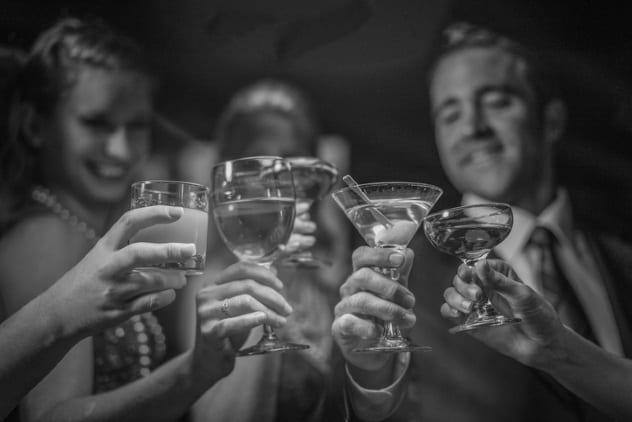 If there was ever a time and place more ill-suited to Prohibition laws, the cosmopolitan US during the Roaring Twenties might have been it. Women all over the country were experimenting with breaking traditional standards for their sex, jazz music was bursting out of artistic seams, and large numbers of people continued to relocate to the cities. All of this was happening in a time when the government forced people to drink in secret. In short, the speakeasy was born.

By 1925, in New York City (sort of the capital of Prohibition drama) alone, estimates for the number of speakeasies ranged from 30,000 to 100,000. Think plush couches, colorful cocktails served in fancy glasses, live music, enthusiastic dancing, good vibes, and the sexy ambiance that results from bending the rules.

The very cool part is that a handful of these venues still run today and remain fun places to visit and throw back a legal alcoholic beverage.[1] Besides the bars that have stayed in operation, Prohibition gave way to a style of establishment that night-lifers can be thankful for even today. Funky hidden bars and speakeasies dot cities around the world, from San Francisco to New York City to Melbourne, and make for one great night of class and intrigue. 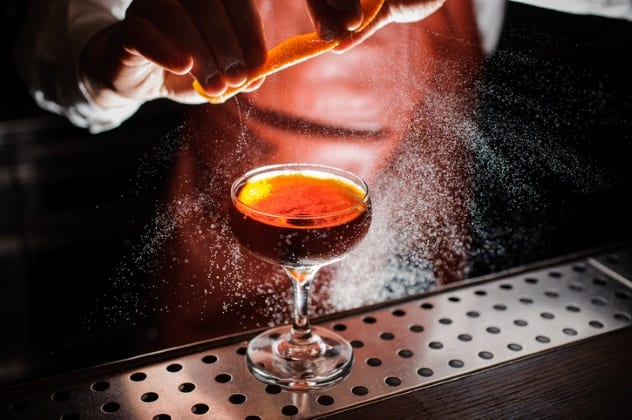 There was a cocktail culture before Prohibition (the first book of cocktail recipes was published in 1869), but we have this silly legislation to thank for mixology really taking off.

Given that a lot of the liquor was distilled using dubious ingredients and under sketchy circumstances, it didn’t always have a flavor that gave way to being served straight or on the rocks. Nevertheless, the people wanted what they wanted, and bartenders nationwide set to work to make whatever came their way nice and palatable. Soon employed were various fermenting techniques (thus the emergence of bathtub gin), mixers, and more.[2]

Beloved cocktails with Prohibition origins include the Manhattan, martinis, gin Rickeys, the French 75, and champagne cocktails in general. In a delicious irony, Prohibition changed the culture of cocktails for the better, forever. 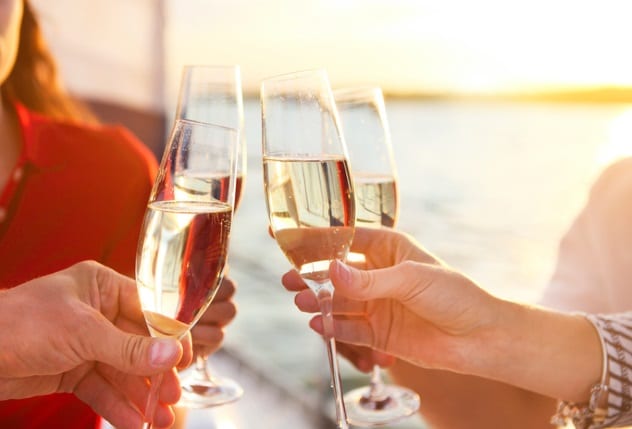 If you’ve never been on a booze cruise (aka party cruise), put it on your must-do list. The name pretty much says it all. You hop on a big, fancy ship, head into the ocean, and party your heart out.

Prior to Prohibition, cruise ships had primarily been used to transport people between Europe and the States. Forward-thinking entrepreneurs put international waters to an even greater use after public consumption was outlawed, and many a fancy flapper took to boats to sip to their heart’s content. Ranging from a few hours to a few days and from distances as small as a circle and as large as a round trip from NYC to Cuba, an entire industry of oceanic partying was formed.[3]

It’s not so much the fact that such cruises and events still exist as the fact that fiery men and women from the time actually partied on ships that makes this consequence of Prohibition so awesome. 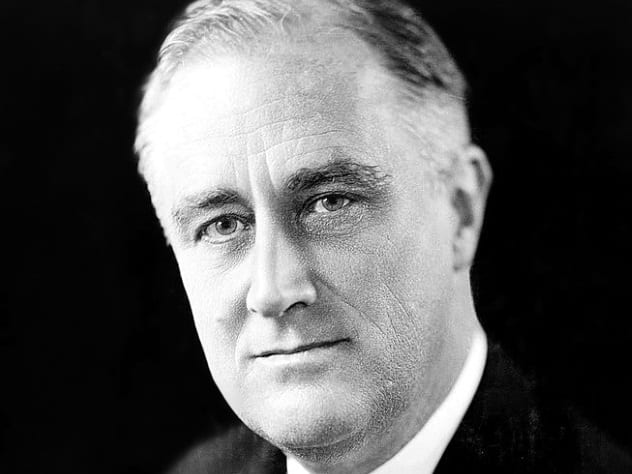 Franklin D. Roosevelt campaigned for the presidency partially on the promise that he would get rid of the 18th Amendment if elected. Not only was enforcing the law becoming more and more of a drain on the country’s resources, but as the US sank deeper into the Great Depression, Prohibition started to seem more and more ridiculous to have as a priority.

Roosevelt actually lived up to his promise and started the arduous process of repealing the law shortly after being elected. (A US president can’t just toss out a Constitutional amendment overnight.) FDR quickly signed a bill allowing booze with a low alcohol content to be sold. Afterward, he reportedly said, “What America needs now is a drink.”

FDR supposedly then drank a martini in celebration.[4] Some claim that he asked for a beer. Either way, it might have been one of the coolest things a US president ever said, and the fact that he actually drank after makes it that much cooler. Cheers, Mr. Roosevelt. 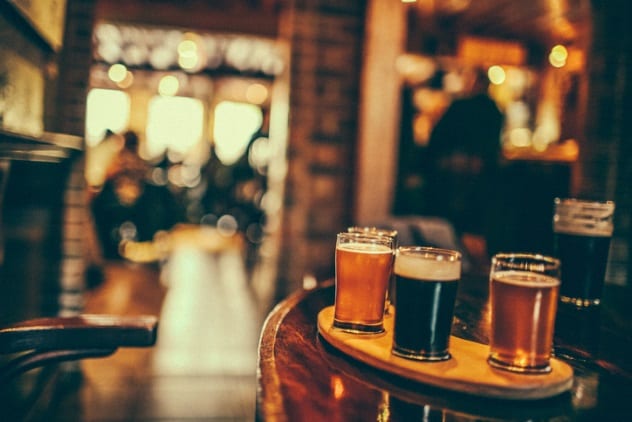 Home brewing might be all the rage these days, but it wouldn’t be so widespread if it wasn’t for Prohibition forcing people into their homes to mix the good stuff.

The connection is pretty clear: The 18th Amendment outlawed the public sale and consumption of alcohol but did not technically forbid people from making their own booze. Resourceful people around the country set to work fermenting anything they could get their hands on, and the home brew industry was born. And an industry it was. Malt syrup alone, sold in 500–600 stores nationwide prior to Prohibition, could be found in 25,000 stores by 1928.[5] Overall, sales for home brewing supplies stood near $136 million by the mid-1920s.

Prior to Prohibition, beer was widely available to men in any number of different establishments. These ranged from the neighborhood saloon, which enticed customers with a free meal to go with their drink, to fancy membership-style parlors for the snobby drinker. Considering how inexpensive and accessible beer had been for men prior to ratification, home brewing would likely not have become mainstream had it not been for people being forced into their homes to source the suds. 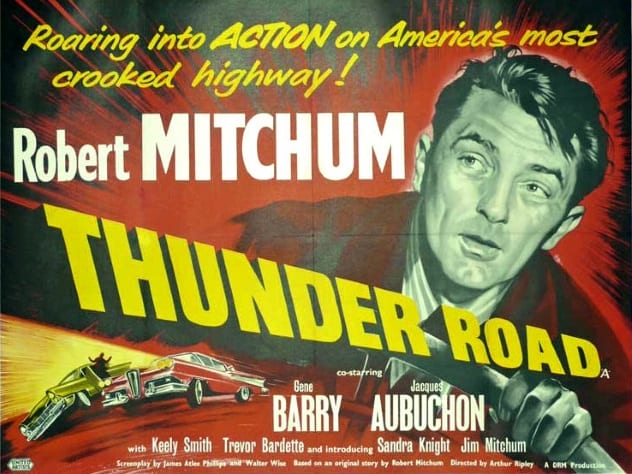 Numerous underground organizations, businesses, and entire industries were created in the efforts to “run” booze during the years of Prohibition. In order to literally outrun law enforcement, automobiles were modified, enabling determined drivers to leave pesky cops in the dust and moonshine in the glasses.

We all know how some men are with their cars. Before long, the mechanically inclined were racing each other. Muscle cars and drag racing were born. The cult classic Thunder Road is about the adventures of such characters and is an impressive example of 1950s filmmaking in its own right. The movie is still known for its stunts and special effects, which revolutionized the industry. (It is said that one forgets that the movie is filmed in black and white while watching.) Thunder Road is considered to have started the long succession of muscle car movies, a tradition that continues to this day.[6]

The film, in turn, inspired the Bruce Springsteen track by the same name, which is one of his most highly acclaimed songs. 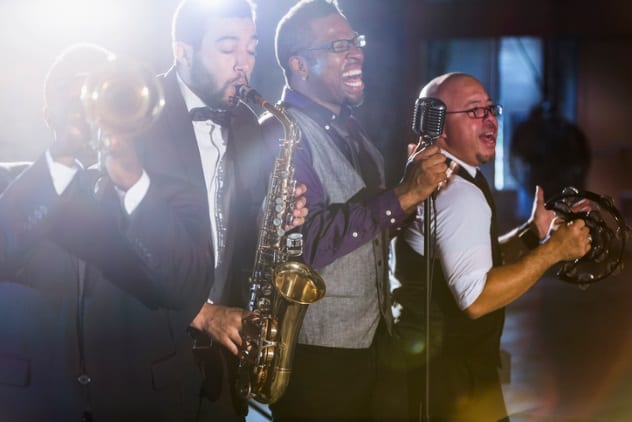 Prohibition had a great way of bringing people from all walks of life together in the seedy underground. Before 1920, it was rare to see men and women drinking leisurely together in public. Local saloons, where men drank beer and congregated until all hours of the night, were considered to be the source of many societal problems by the fans of the 18th Amendment. These saloons vanished with the new liquor laws and were replaced by many more speakeasies.

Competition was stiff, and proprietors had to act quickly to keep ahead of other speakeasies. Entertainment was quickly employed as a way to lure people to their establishments, and the sky was the limit. Given that so many social barriers were already being broken in the speakeasies, interracial mingling became more and more acceptable, and jazz music became the entertainment of choice for all the hippest clubs.[7] (Black musicians were also preferable in the early years, as they attracted less attention to the clubs.)

Jazz music went on to inspire countless musicians, as well as an entirely new way of performing and writing music, and was directly responsible for changing the face of popular culture forever. 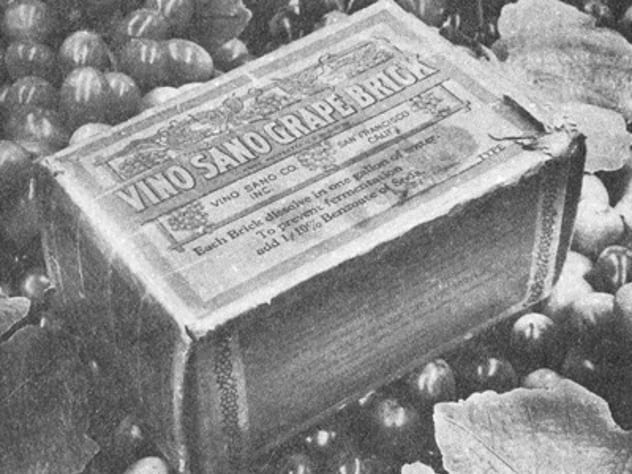 That wine bricks were ever a thing is what makes them super cool. Then again, if you’re a wine lover, you might have preferred wine bricks to be on the list of reasons why Prohibition was super lame, but nevertheless . . .

One of the (arguably) ingenious ways that retailers got around the laws of the 18th Amendment was by exploiting the allowances it gave to religious groups to continue to drink (as prescribed by scripture, of course) as well as the various other technical loopholes that existed in the law.[3] I won’t bore you with an explanation of the loopholes themselves, as even today, trying to both understand and explain them can confuse and frustrate even the most patient of historians. Let’s just say that determined winemakers were able to stay in business because they were allowed to sell grape juice and, apparently, grape powder, as long as it didn’t contain alcohol.

If law-breaking citizens bought said products and fermented the juice in the privacy of their own homes, what could law enforcement do to stop it? For safety’s sake, bricks of grape powder were all labeled with a clear caution against fermenting them, lest wine materialize. How caring.

Yet another industry was created, and wine bricks could be found in every pharmacy in the union. Don’t agree with me that it was a good consequence? Come on, it’s a brick of wine! It’s awesome. 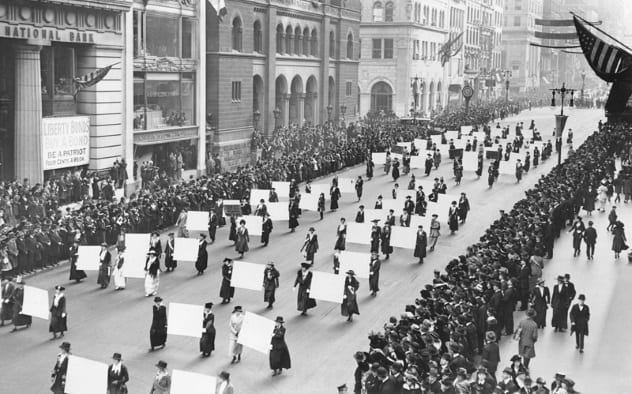 Yes, the temperance movement led to the success of the next Constitutional amendment, good old #19, which gave women the right to cast a vote.

One of the most powerful forces for the women-weary to be reckoned with, the partnership between Elizabeth Cady Stanton and Susan B. Anthony, started in temperance activism. The two women ended up forming a collaboration that would eventually lead to women getting the vote.

Why was temperance effective in bringing early feminists together? For starters, in the late 1800s and early 1900s, domestic violence, abandonment, and neglect by husbands and fathers were all prevalent, particularly in the large cities. Many concerned individuals, especially other wives and mothers, saw drunkenness as the root of these evils. Furthermore, during this time, temperance organizations and events were among the few realms that accepted females as part of their leadership. Before long, the movement was full of suffragists. [9]

Luckily, the majority of women within the temperance movement broke off to focus on abolition and women’s rights. 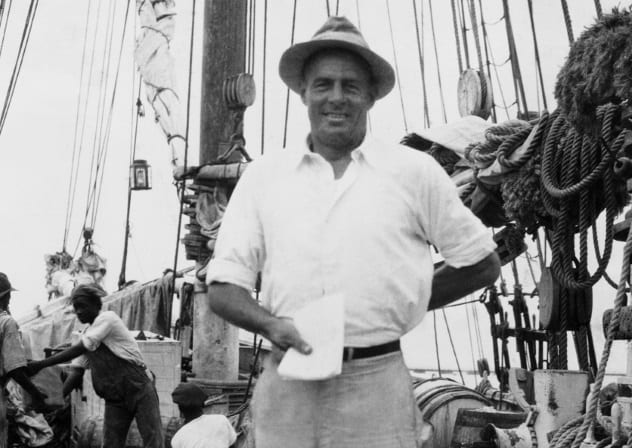 Necessity is truly the mother of all invention. The English language has this unfortunate period in history to thank for many a term that we still use today. To name just a few: “white lightning,” “bathtub gin,” “boozehound,” “dry,” “hooch,” “bootlegger,” “moonshine,” “speakeasy,” “hush money,” and “blind pig.” From booze running to partying and everything in between, it was a time of much novelty, and language had to hurry to keep up.

Last, but not least, was “the Real McCoy,” named for boat designer and booze runner William McCoy. McCoy was so well-known and had such an impeccable reputation for transporting the highest-quality alcohol from the Bahamas to New England that those selling his product soon started using his name as evidence that the drinks were genuine.[10]

Prohibition may not have stopped many people from drinking, but it changed the way many people were speaking and added a huge dash of creativity and innovation. Thanks again, Prohibition.

Janice Formichella is an American-born traveler of the world currently residing in Bali, Indonesia. She loves history, gin, girl talk, her bullet journal, and a good list. You can follow Janice and her adventures on Twitter @JaniceLikes and on Instagram @Janiceonthemove.

For more reading on the wacky days of the prohibition, check out 10 Fun Stories About America’s Bootleggers and 10 Outrageous Claims Made By The Temperance Movement.