Keeping up with the news is hard. So hard, in fact, that we’ve decided to save you the hassle by rounding up the most mind-blowing stories each week. The week that took us into the last days of July is unlikely to go down in history, except perhaps among fans of Linkin Park, whose front man, Chester Bennington, tragically committed suicide (more on this below).

But while the last seven days may have been short on world-changing stories, there was still enough going on to pique our interest. From a dusty road between China and Bhutan to the Greek capital, Athens, to a truck stop in Texas, here’s what’s been happening. 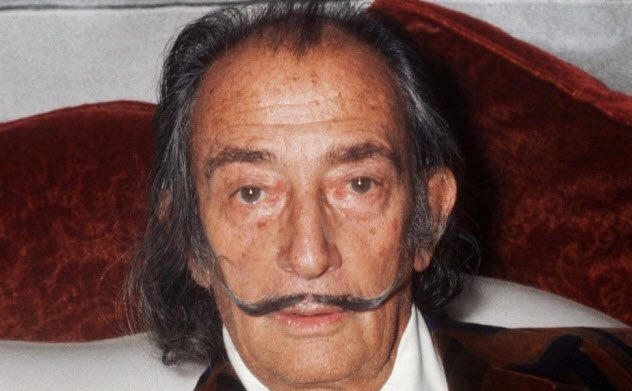 After he died in 1989, Salvador Dali was interred beneath a marble slab in the middle of his self-designed museum in the Catalan town of Figueres. There, he probably would have remained for all eternity had a woman called Maria Pilar Abel not arrived on the scene.

For the past 10 years, Abel has contended that she is Dali’s daughter, the result of an affair between the great surrealist painter and her mother in 1955. Not coincidentally, Spanish law stipulates that, were she able to prove parentage, she would be entitled to a quarter of Dali’s estate.[1]

And Dali was a very, very rich man. After previous tests proved inconclusive, Abel finally got permission to have her maybe-father’s corpse dug up to extract a DNA sample. Last Thursday night, that’s exactly what happened.

We won’t know the results of the test for another month or two. That’s not to say that some interesting details didn’t immediately emerge. The first story to come out of the exhumation was that Dali’s iconic mustache is still intact. 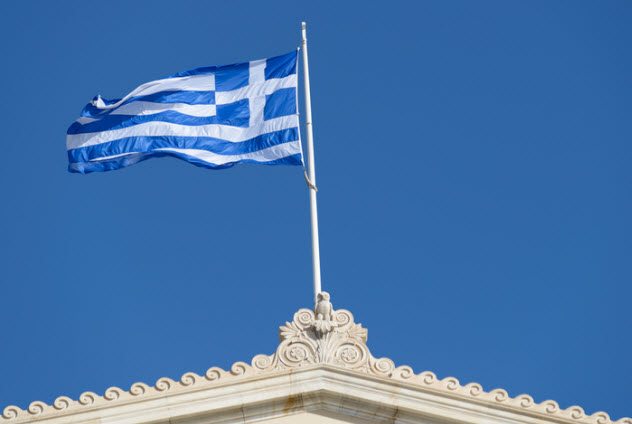 The Greek recession is one of the worst in living memory. The economy shrank by a quarter. Unemployment hit over 25 percent. Youth unemployment hit 50 percent. The American Enterprise Institute has argued that Greece suffered worse than the US did during the Great Depression. Both hit similar lows, but the US only took seven years to recover. By contrast, Greece has been in crisis since 2009 and is still a basket case.

That being said, this week provided a glimmer of hope. After a three-year absence, Greece returned to the bond market. Impressively, serious investors got right back in.[2]

Greece’s eye-watering €86 billion bailout expires in a year. The bond sales are intended to show that the country will be able to function on its own without more help from the EU or IMF. This indicates that a corner has been turned and an actual economic recovery might be on the horizon. Greece ain’t out the woods yet, but the biggest financial drama of the current decade may finally be nearing its end. 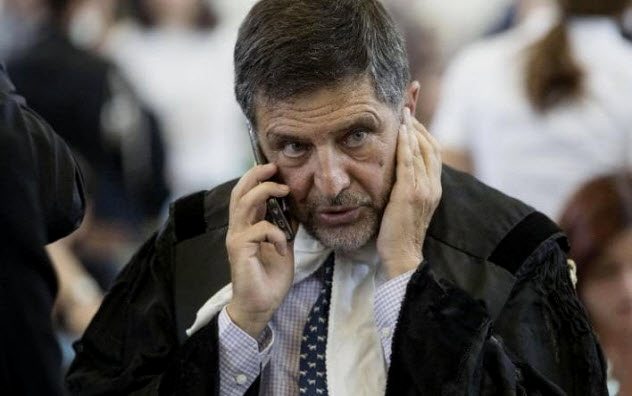 Italian corruption is legendary, with Mafia kickbacks, cronyism, and simple graft all bleeding billions from the economy. But rarely has corruption hit the systemic peaks it did in Rome. For years, the capital has suffered such poor maintenance and insane neglect that garbage has piled high in streets that are potholed and falling apart. The reason? City Hall was absolutely riddled with gang members.[3]

Last Thursday, one of Rome’s biggest corruption cases came to an end. It resulted in the convictions of 40 politicians, businessmen, and city bureaucrats and uncovered a culture of cronyism even Michael Corleone couldn’t envisage. Public tenders were rigged, money vanished into Mafia pockets, and nearly every member of Rome’s political class appeared to be on the take. Worst of all, it revealed that organized crime had infiltrated City Hall to an extent perhaps not seen since Al Capone’s Chicago.

7 Switzerland Was Rocked By A Bloody Chainsaw Attack 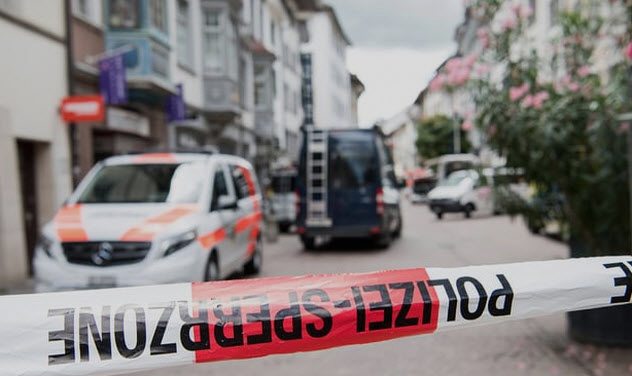 Schaffhausen is a tiny Swiss town where almost nothing had ever happened—until Monday. At 10:30 AM local time, a man walked into the offices of CSS Insurance. He pulled out a chainsaw and tried to cut two workers to pieces.

Chainsaw wounds are nasty, bloody, and (usually) deadly. That’s why they crop up in so many retro horror films. In this case, amazingly, no one was killed. One of the workers was very badly wounded, though, and two other people had to be treated for shock at the scene.[4]

The attempted slaughter sparked one of the biggest manhunts in Swiss history, eventually involving 100 Swiss and German officers. After two days on the run, 51-year-old suspect Franz Wrousis was arrested near Zurich. He was a local bum who had spent some time recently sleeping in his car. While no motive for this vicious attack has yet been uncovered, it is not thought to be related to terrorism. For anyone who grew up in the first decade of the 21st century, Linkin Park was the beating heart of alternative rock. Lead singer Chester Bennington’s powerful vocals served as an anchor for what was then a fresh new mix of nu metal and rap and the result was crazy successful. Hybrid Theory remains the biggest-selling debut album since 2000, and Meteora went platinum so many times that most people lost count.

Although they had their detractors, Linkin Park was the voice of a generation. A generation of slightly awkward outsiders who found solace in their angst-laden music. Which is why last week’s news came as such a shock. On Friday, it was announced that Bennington had committed suicide. He was 41.[5]

The news was followed by an outpouring of grief from those who were guided through their teen years by his lyrics. There was also sadness at his cause of death. Bennington was close to Soundgarden singer Chris Cornell, who hanged himself in May. A tragic reminder that an illness like depression can strike any of us. 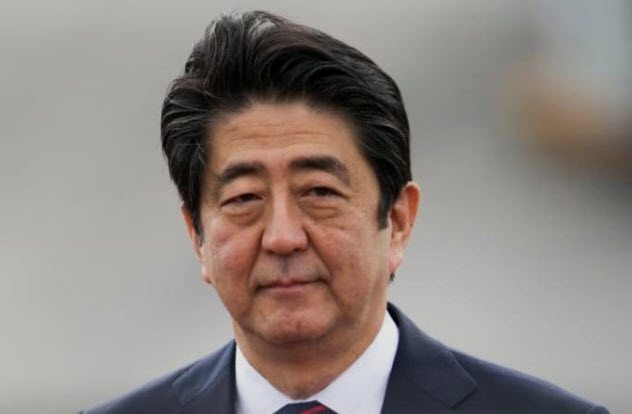 Shinzo Abe has an unofficial label he shares with Tony Blair: “Teflon.” Both politicians had a knack for shrugging off troubles that would have sunk a lesser prime minister. But only to a point. Both ended their careers with a fall from grace. In Blair’s case, this happened after he left office. In Abe’s case, it’s happening right now. The Japanese PM is so unpopular that he’s practically radioactive.

Abe’s approval rating of 26 percent comes as scandal engulfs his administration. He’s accused of waiving the rules so his old friend Kotaro Kake could open a private school. This comes after a previous scandal in March which saw Abe accused of selling public land at an 80 percent discount to a school where his wife was honorary principal. In low-corruption Japan, such blatant cronyism has caused immediate backlash.

Only one postwar Japanese PM has ever survived approval ratings below 30. Abe had hoped to become the country’s longest-serving prime minister. Now he may be lucky just to survive until next year’s election.[6] 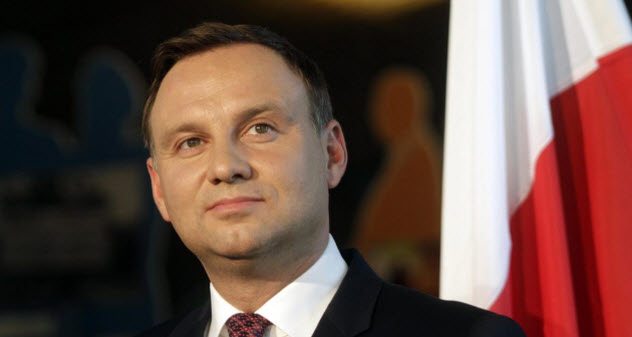 But look to the Spanish-speaking world, and you’ll see an eerie parallel: Venezuela. In a move that would make Nicolas Maduro blush, PiS this week attempted a power grab that would have turned Poland into a one-party state.

The grab came in the form of legislation that would have placed the Polish Supreme Court directly under PiS’s control. It would also have dissolved the National Judiciary Council, which picks Poland’s judges, allowing PiS to only nominate judges loyal to their party. This is basically what Maduro is doing in Venezuela right now, and it sparked equally big (if infinitely more peaceful) protests.

Thankfully, one PiS member wasn’t down with this hollowing out of Polish democracy and he just happens to be president. President Andrzej Duda vetoed his own party’s legislation, the first backbone he’s shown since coming to power.[7] However, since Duda has previously been at the forefront of trampling Poland’s constitution, this may just be a temporary reprieve before democracy is killed off permanently.

3 An Earthquake Smashed The Greek Island Of Kos 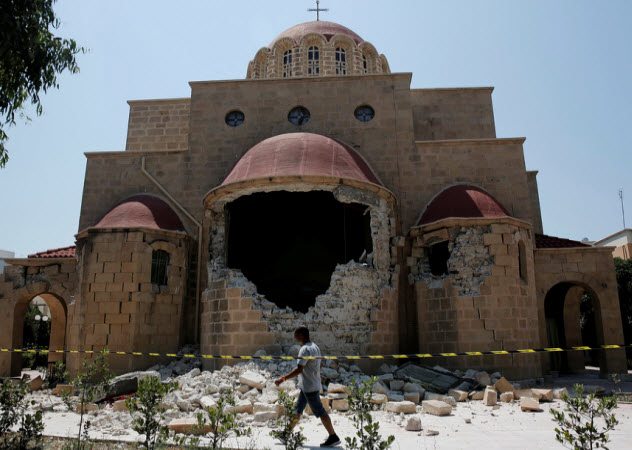 In the Aegean Sea near Turkey, the Greek island of Kos is a tourist hot spot that spends the summer months swarming with visitors. As such, it’s remarkable that it’s not now synonymous with tragedy. On Friday, a 6.7-magnitude quake struck the island. In the old town, buildings built before earthquake regulations came in collapsed onto fleeing tourists. When the 30-second quake stopped, 473 people had been injured.[8]

Yet somehow, amazingly, only two people were actually killed. Of the hundreds injured, only 12 required hospitalization. Incredibly, despite the falling buildings, shattering glass, and scenes of chaos, the quake had managed to avoid taking many lives. Considering over 200 died when an old Italian town collapsed in an earthquake last year, that’s saying something.

Nonetheless, the quake caused a significant amount of damage, including to irreplaceable historic sites. It was also undoubtedly traumatic for all those caught up in it, especially the families of the two deceased. We can only thank God that its aftermath wasn’t any worse.

Have you seen the video of China and India’s recent border dispute? It’s about 20 unarmed men standing on a muddy road pushing each other like fourth graders. It’s kinda funny. It’s also terrifying. Last time China and India got in a serious border dispute in 1962, over 2,000 people died.

The latest dispute comes after China tried to build a road through a remote stretch of Bhutan that it considers Chinese territory. Tiny Bhutan can no more stand up to China than you could to the Incredible Hulk, so they called in big brother India.

Delhi has long believed that Beijing has designs on Northeast India, a region bordering Bhutan that is the size of the UK, has a population of approximately 45 million, and is only connected to the rest of India by a tiny corridor some 20 kilometers (12 mi) wide. So when Bhutan called for help, Delhi sent in the troops to stop the road builders. Beijing responded by sending troops in, too. Now we’re in the ridiculous situation where two regional powers may be about to go to war over a muddy stretch of road.[9]

The trouble is that neither side can back down without losing face, and China and India are old enemies. They’re also both nuclear-armed, which raises the stakes. While things will likely diffuse, there’s a chance that events could take a far deadlier turn. 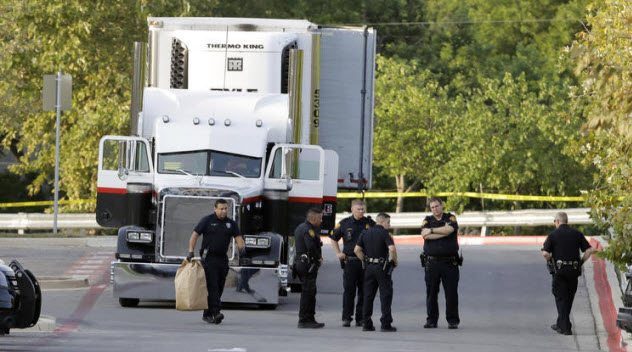 We can debate till the cows come home whether illegal immigration is a bad thing. The same can’t be said for people smuggling. Those smuggling migrants are often the lowest of the low, allowing scores to drown in exchange for a few quick bucks. On Sunday, they took time out from causing tragedy in Europe to bring some to America, too. Police were called to a parked truck in San Antonio, Texas. When they forced open the doors, they were greeted with a scene from a horror movie.

Around 40 people—mostly migrants from Mexico and Guatemala—had been crammed inside the sweltering rig with no water or air conditioning while temperatures outside hit 38 degrees Celsius (101 °F). By the time police rescued them, nine were already dead, with another 17 in life-threatening conditions. Sadly, another person died in the hospital, bringing the death toll to 10. Three victims were estimated to be between 10 and 17 years old.[10]

The case is the deadliest people-smuggling incident in the US since 2003, when 19 migrants suffocated in the back of a rig crossing Texas in remarkably similar circumstances. It shows how callous people smugglers are capable of being and how depressingly easy it is for them to prey on poor and desperate migrants.