Some people just look cool. Whatever they do, others will want to emulate it in hopes that a little of that magical allure will stick to them. Soon, yet more people are copying them, and a fashion is born. Looking back into the past, we can see that fashions are not modern trends but ones which have shaped our world and in some cases, us. Here are ten tips from the ancient world that modern fashionistas may want to adopt . . . or not. 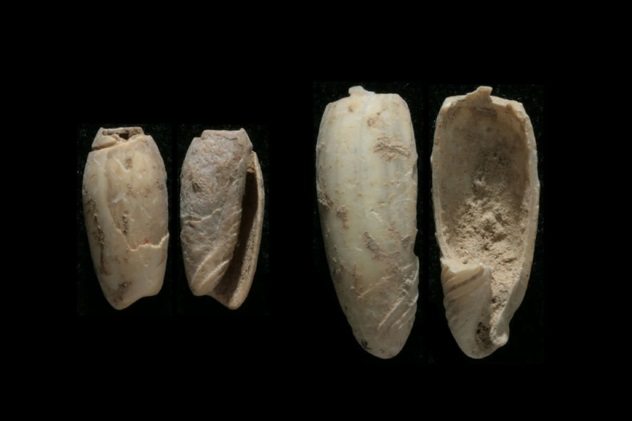 Gold and silver are among the easiest metals to work. They melt at low temperatures, can be beaten into intricate shapes, and can be found simply lying about in streambeds without the need to dig deep into the Earth. But because they are so soft, they have few practical uses. Their beauty made them perfect for jewelry, however. The oldest-known gold artifact in the world dates from 4500 BC and is a tiny bead to be hung on a string.

If gold is too modern for you, then you may want to look further back for inspiration. Jewelry has a history that vastly predates metal use—and may not even be exclusive to humans. A set of eagle talons found among Neanderthal remains from 140,000 years ago show marks from having been cut into jewelry. In Kenya, people wore drilled discs of ostrich egg 40,000 years ago. In East Timor, at around the same period, people sported seashells, the remains of which bear red ocher that may have come from their body paint. In a cave in South Africa, tiny 75,000-year-old shells with holes were found grouped together. They were probably hung in bunches as a necklace.[1] 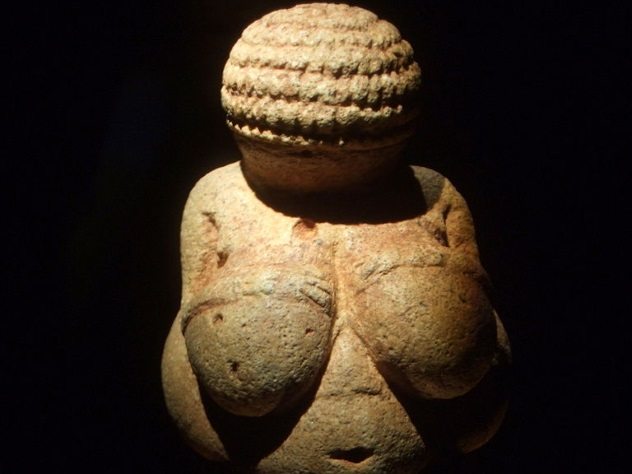 Animal skins are all very well for cave dwellers, but you want a more up-to-date look. You want that chic woven-fabric style of clothes that the cool tribes are wearing. Weaving first appeared at least 27,000 years ago. The earliest evidence comes not from clothes, which have long rotted away, but from impressions left in clay pots. The impressions show a wide variety of weaving styles to choose from. This discovery pushed back the debut of weaving and changed our view of some iconic ancient statuettes forever.

Venus figurines come from the late Paleolithic era and show enormously fat bodies, generally those of women. While you may wish to copy their body shape, it is their hats which have caught researchers’ attention. Before the discovery of ancient weaving, it was thought the complex patterns adorning the Venuses’ heads were elaborate hairstyles. Now they are being seen as early woven hats like a modern beanie.[2] 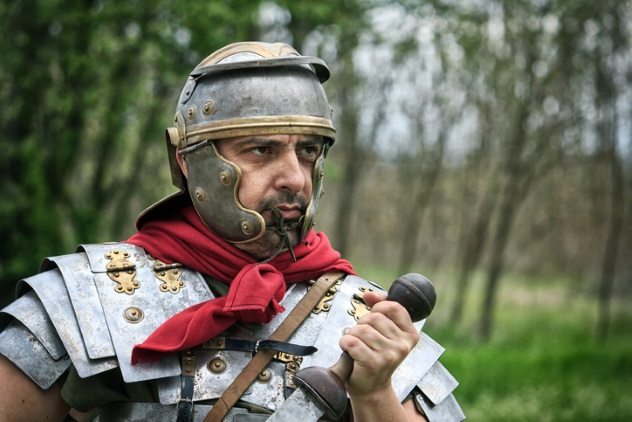 When a Roman army marched toward you, it would rarely be a laughing matter. Look away from their swords and shields, however, and you might chuckle to find these valiant men wearing socks and sandals. The conquerors of the world were not afraid to commit a fashion faux pas. In Britain, artifacts have been discovered showing Romans in their socks and sandals. A razor handle fashioned like a shapely leg clearly shows a foot with woven socks pulled up high, underneath a pair of sandals.[3]

You might think this was a fashion necessitated by the chilly British climate. However, from the scorching sands of Egypt comes more direct evidence of the ancient fondness for socks and sandals. In the Victoria and Albert Museum, there is an unusual pair of bright red socks from roughly AD 300. They have two divided toes at the end to allow the straps of a sandal to slip comfortably through. 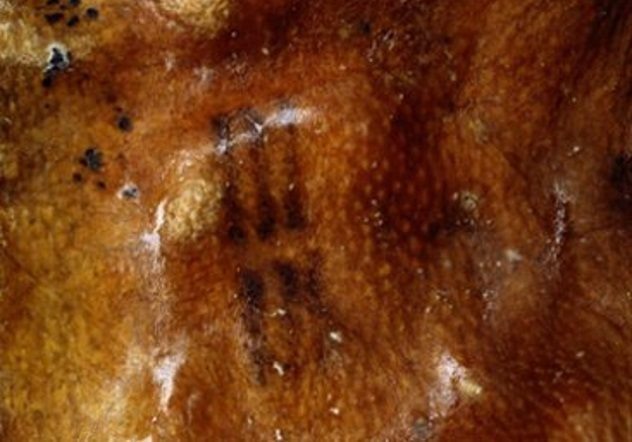 Tattoos are everywhere these days. It’s hard to find a pop star who doesn’t have even a little ink somewhere on their body. While the fashion for flaunting tattoos is new in our society, in the past, people were equally happy to show off their skin art. How do we know this about the ancients, who left little art and no writing? The best place to find tattoos is in the skin.

In Chile, hundreds of mummified bodies from the Chinchorro people have been discovered. One of these was a young man with a row of tattooed dots above his upper lip. Perhaps he was attempting to make up for a lack of facial hair. He died around 4,000 years ago.

The oldest-known tattoos come from Otzi the Iceman, a frozen body discovered in a melting glacier in the Alps. When Otzi froze to death 5,300 years ago, the cold preserved his 61 separate tattoos. These are mostly horizontal lines and are thought to have had ritual or therapeutic purposes, but they could also have been status symbols that would have made others envious.[4] 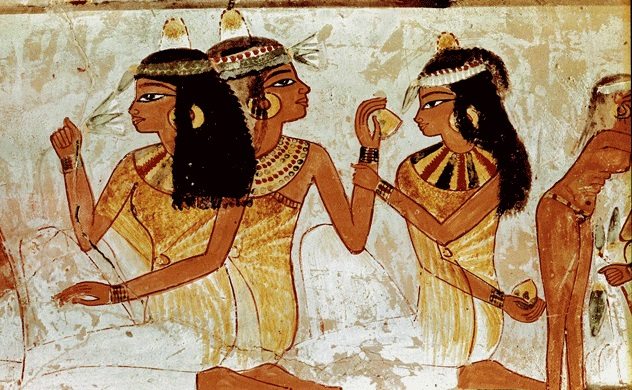 Fashion extends beyond what the eye can see. The human body isn’t always the most fragrant of objects. As soon as humans discovered pleasant-smelling ointments, they seem to have smothered themselves in them. On Cyprus, a 4,000-year-old perfume factory has been discovered in the ruins left by an earthquake. The residue of perfumes clinging to pottery vessels has allowed modern perfumers to recreate these ancient aromas.

The ancient Egyptians were addicted to perfume. They considered fragrances to be the sweat of the Sun god Ra. They had a god of perfume called Nefertum, who healed with sweet-smelling blossoms.[5] To wear your perfume like an Egyptian, you’ll have to give up your spray bottles. The Egyptians infused aromas into oil, not alcohol as we do. A cone of perfumed wax would be balanced on top of an Egyptian’s head. As it melted over the course of a sultry evening, it released its smell. 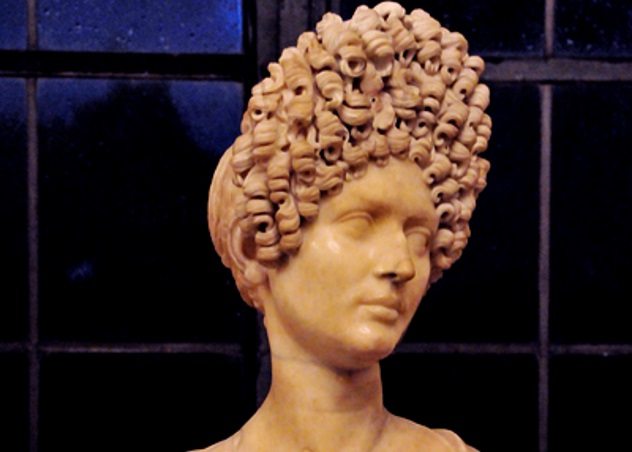 Are you a lady looking to stand out from the crowd, to set yourself above your competition? Then Roman women of the Flavian era (AD 69–96) have some advice for you: Pile your hair on your head in an imposing mass of rings. The satirist Juvenal describes how “numerous are the tiers and storeys piled one upon another on her head!” Aristocratic ladies of this time would have kept a specially trained slave, an ornatrix, for the task of teasing their quiffs ever higher. If a rich Roman woman lacked sufficient hair to produce the desired look, she could turn to wigs made from slave hair.[6]

Fashions in hairstyle could change quickly, so a bust carved from marble could certainly end up depicting a lady with a passe hairdo. To combat this, some busts were made with detachable stone wigs to allow more up-to-date styles to be attached at a later date. 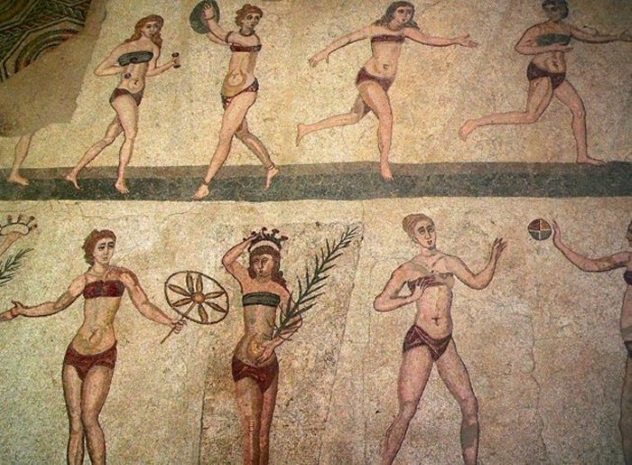 The bikini was supposed to be as explosive a clothing garment as the hydrogen bomb which scorched the Bikini Atoll was. When it was created in 1946, it was the height of modernity—except for the fact that an ancient Roman woman would have instantly recognized it.

While modern bikinis are used for sunbathing and swimming, to the Romans, they were sportswear. A mosaic has been uncovered showing ten women taking part in various sports wearing something very similar to a modern bikini.[7]

It was not merely a practical garment, however. The Roman bikini was an object of titillation. Poets made bawdy jokes about the women who wore them, and art was created of the wearers, possibly for men to gawk at. At Pompeii, a statue of Aphrodite was discovered showing the goddess of love in a gold bikini. 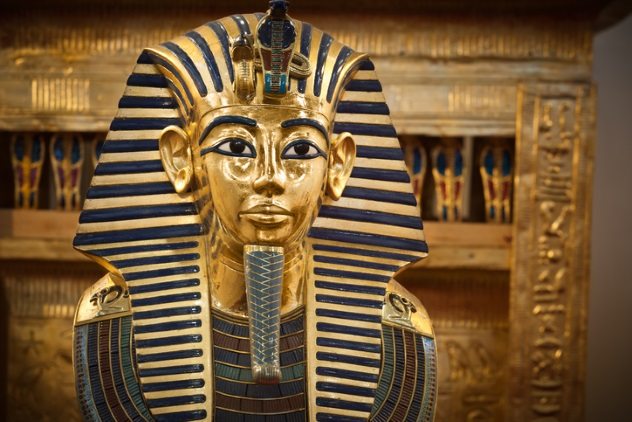 The Roman comic playwright Plautus said, “A woman without paint is like food without salt.” The use of cosmetics goes back far beyond the Romans, however. Paint-making tools have been found from 100,000 years ago, containing the same pigments used in ancient societies to decorate the body.

Makeup as we know it can be traced to the Egyptians. Egyptian men and women from all social classes applied a thick layer of dark kohl around their eyes. This had a religious symbolism, related to depictions of the gods, but it also had practical uses. The dark pigment helped to reduce the glare of the fierce Sun, repelled annoying insects away from the eyes, and caught dust and sand.[8] Kohl contains toxic lead, but that was a risk worth paying for beauty. Roman women would use rouge made from an equally dangerous red lead compound.

How to Wear a Toga the Ancient Roman Way

Think of Rome, and you might think of old men in togas in the Senate house. That was about the only time you could get a Roman to actually wear a toga. Togas were not designed for everyday use. Only on occasions when it was necessary to put on a show would a man don his toga.

Togas were pretty much designed to be useless as clothes. To be worn properly, these huge semicircles of wool required the help of slaves in dressing.[9] Holding it in place all day meant you could not use your left arm for any other task. The thick wool was stifling in the Roman summer. Wearing a toga told people you were far too important to actually do anything physical. To keep your toga clean also required it to be soaked in urine and trampled by slaves’ feet to dissolve grease.

One advantage of the toga was that the folds of cloth provided handy spots for carrying small objects like a stylus and notepad. Caesar’s assassins hid their daggers in their togas. 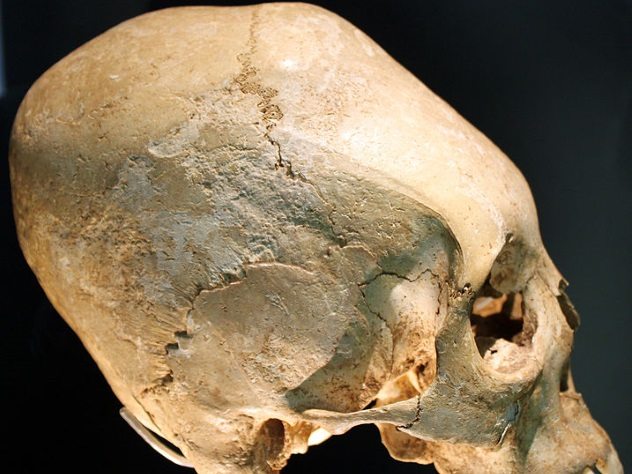 Are you tired of having to wear a top hat to show how upper-class you are? Why not change the shape of your skull? Alas, it is too late for you, but your children may benefit. For at least 10,000 years, humans have been molding the malleable heads of babies into unusual and unnatural shapes as a marker of social distinction.[10] The practice seems to have developed independently in many civilizations. Ancient Europeans, the Huns, the Ostrogoths, the Maya, the Inca, and Native American tribes all used various methods to alter the shape of their children’s skulls.

Hippocrates, the father of Western medicine, described the technique used to achieve artificial cranial deformation in 400 BC: “They think those the most noble who have the longest heads. It is thus with regard to the usage: immediately after the child is born, and while its head is still tender, they fashion it with their hands, and constrain it to assume a lengthened shape by applying bandages and other suitable contrivances whereby the spherical form of the head is destroyed, and it is made to increase in length.”

Read about more historical fashion trends on 10 Classic Fashion Trends That Seem Completely Bizarre Today and 10 Ways Our Ancestors Killed Themselves In The Name Of Fashion.