We take many things for granted. In fact, there are a lot of modern conveniences that we just accept as part of life. Most people reading this have toilet paper, toothbrushes, running water, and electricity—and they don’t really have to figure out how to get by without them.

But there was a time when these things didn’t exist. People had to figure out other ways to do all those everyday tasks we take for granted. Things used to be a lot harder. And we don’t mean having to rewind VHS tapes before bringing them back to Blockbuster.

This is going to be a lot worse than that—and a lot weirder. 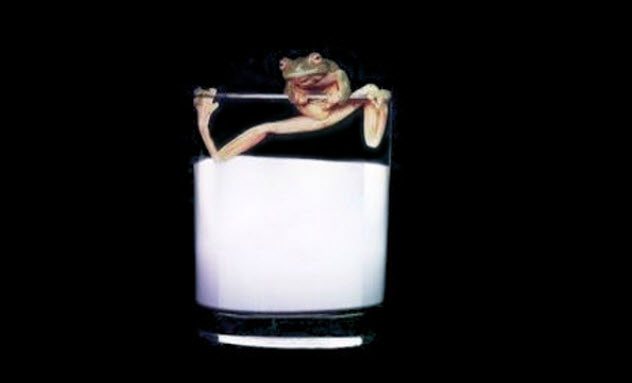 Before refrigerators were invented, most people’s diets were very different. There’s a lot of food that just isn’t practical if you can’t keep it cold. For example, milk goes bad quite quickly without a fridge to put it in, so most people just didn’t drink it that often.

But not the Russians. The Russians found a different solution. They put frogs in their milk.[1]

In some parts of Russia, people would drop frogs into buckets of milk to keep it from spoiling. That sounds a little strange, but oddly enough, it actually worked. The frogs’ skins were coated in an antibiotic peptide that kept bacteria from contaminating the milk, which actually made it safe to drink for a longer time.

Not that the Russians knew that. We didn’t figure that out until about five years ago. The people who did this had no idea that the frogs were keeping their milk from going bad until just recently. They were just dropping frogs into milk for reasons that no one can quite explain. 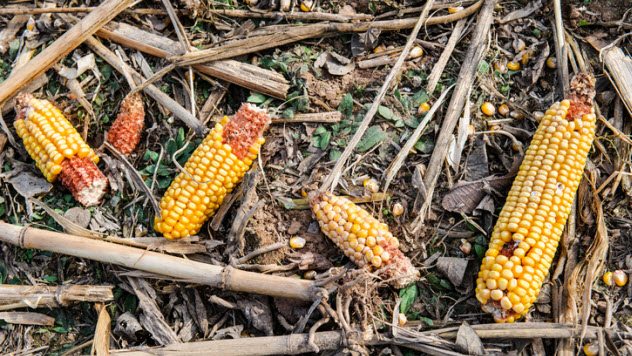 Before toilet paper, people had to do some weird things to keep themselves clean. We’ve already told you about the Romans sharing a sponge on a stick and the Greeks wiping themselves with broken pieces of pottery. But weird ideas about bathroom hygiene didn’t end with the ancient world. They carried into the 19th century.

When settlers first came to America, they didn’t have mills churning out extra-soft, cottony toilet paper. They had to make do with what they had, which was usually leftover corncobs.[2]

Later, the Farmer’s Almanac started sending out copies of their magazine with a little hole in them. The hole was added so that people could hang the magazine by their toilets and then wipe themselves with the pages.

It took until 1857 for toilet paper to be mass-produced, and even then, it wasn’t that great. By 1935, toilet paper companies were advertising their products as “splinter-free.” Before then . . . ouch.

8 Before Alarm Clocks, People Nearly Wet Their Beds To Wake Up 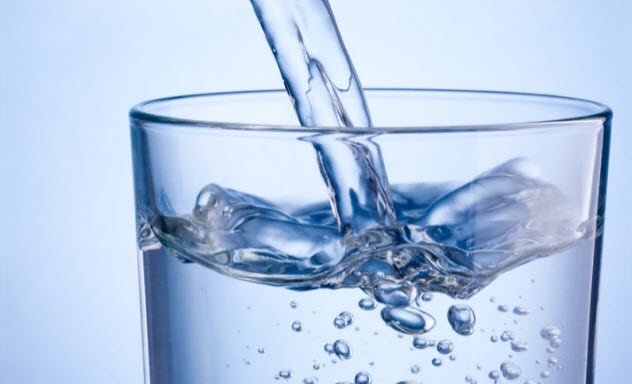 There were a lot of ways to wake up before the alarm clock was invented. People living in towns had the chimes of the church bells, and people living on farms had roosters to crow them awake. But not everybody kept it that simple. In some places, people made getting up in the morning a much stranger experience.

Native Americans would make sure they got up early by drinking as much water as physically possible before falling asleep. That way, the water would fill up their bladders while they were sleeping. Pretty soon, they’d be so full that they felt like they were going to burst. So they’d either get up early and get a head start on the day—or else just burst.

In England, it was a bit easier. You could pay a “knocker-upper” to get you up in the morning.[3] Your knocker-upper would come to your house first thing in the morning and bang on your window with a long stick. And if he wanted to make his shilling, he’d keep banging until you got up and shared with him the customary curse words of morning.

7 Before Automated Messages, People Sat In Booths Saying What Time It Was 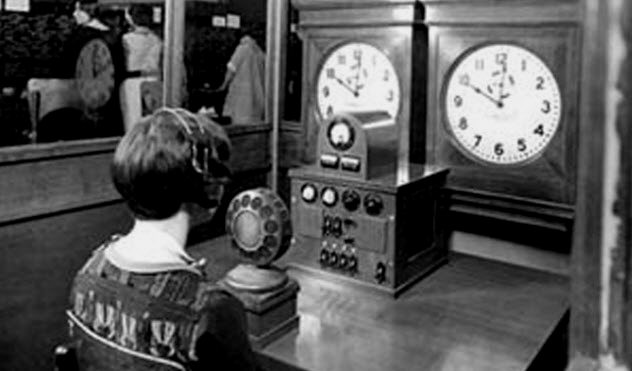 Speaking clock hotlines—those phone numbers you can call to hear a voice tell you what the current time will be after the beep—still exist. But when they first came out, they were a little different—and working for one was a lot weirder.

In 1933, the first speaking clock hotline was set up in the United Kingdom. Anybody who wanted to know the time could call a phone number and hear someone say the time. But in 1933, they wouldn’t get patched through to a recording. They were connected to a live person who was just sitting in a room staring at a clock and reading what it said—24 hours a day.[4]

For some reason, people believed that sitting in a room, staring at a clock, and saying the time was a big honor back then. So phone companies held competitions to find “the girl with the golden voice.” One lucky girl would be sent up to the clock room, where she’d get to spend hours alone in the booth repeatedly reading the time to strangers. And if that didn’t beat all already, she’d also get a whole 10 guineas. 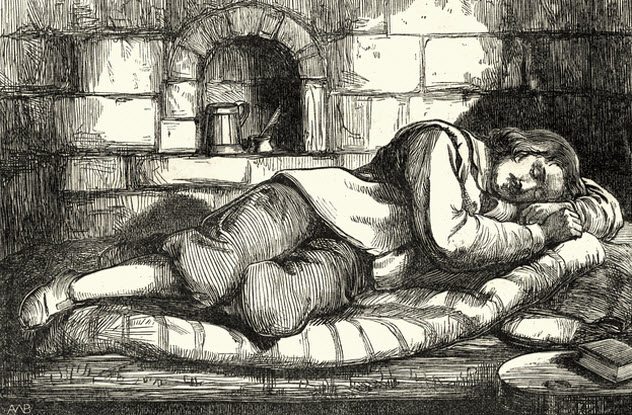 Before our houses were awash in light 24 hours a day, people slept differently. According to one theory, human sleeping habits completely changed when we started lighting up our homes with torches and light bulbs. Life changed, too.

Instead of just falling unconscious for six to eight hours—or if you’re a freelance listicle writer, 12 to 14—people would sleep for about four hours at a time.[5] They’d usually wake up in the middle of the night and spend a couple of hours getting some chores done. If they were in the upper class, they’d write in journals and somberly reflect on life instead. Then they’d go back to sleep.

According to the theory, sleeping that way might actually be better for us. For one thing, getting up after four hours releases a hormone called prolactin, which increases the sex drive. This might just be a clue to something else people did with that hour or so they spent awake.

5 Before Computers, There Were Human Computers 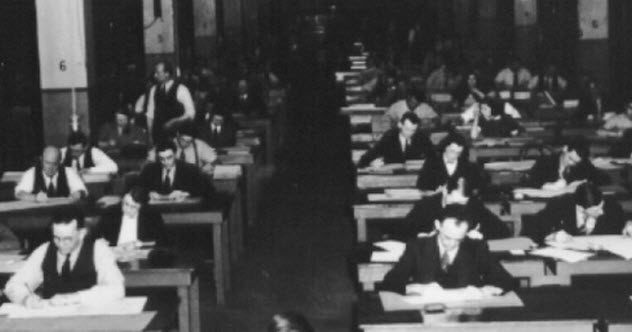 Before personal computers were invented, we still had “computers.” They just didn’t have any electric parts. In the 17th century, a “computer” was a person you could hire to solve math problems for you—ideally, someone who was really, really patient.[6]

Astronomers and mathematicians would hire whole teams of people to come into an office and just do long, tedious math calculations for hours on end. They usually worked in shifts to keep from burning out.

It wasn’t exactly fun math. They did things like calculate the mathematical tables for trigonometry and logarithms. They filled up books with the answers to long, boring questions so that other people wouldn’t have to do it.

It had an incredible effect, though. Human computers filled out those early logarithm charts before calculators were invented. These people were even used to calculate the movement of Halley’s comet by doing math that would seem impossible today without a machine.

4 Before Toothbrushes, People Rubbed Crushed Pots Against Their Teeth 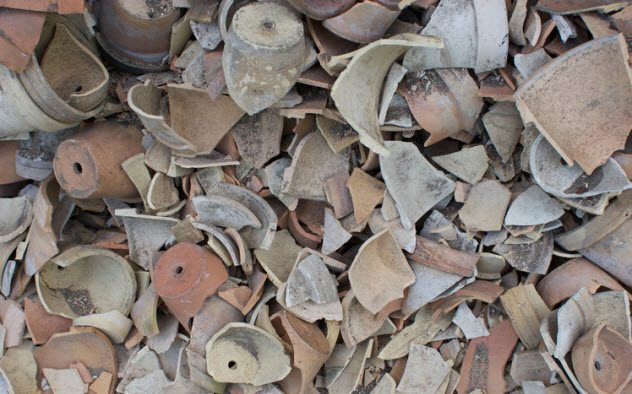 Before toothbrushes were invented, people had to find other ways to keep their teeth clean. A lot of ideas were tried. The Chinese poked their teeth with pig hairs,[7] the Sudanese chewed on flavored weeds, and the Spaniards washed out their mouths with a refreshing glass of their own urine. But most cultures took a slightly more painful approach.

Ancient toothbrushing was practically closer to whittling a piece of wood than it was to what we do today. People used incredibly harsh powders to scrape the gunk off their teeth.

For example, the Greeks and Romans used a crushed powder made from bones and oyster shells. That sounds rough, but at least they came in special flavors to make them more palatable. They could choose between a sweet hint of charcoal or the scrumptious flavor of tree bark.

It only got worse. By the Industrial Revolution, people were crushing up bricks and porcelain pots and rubbing them against their teeth.

Other cultures, though, took the easy way out. Like the Elizabethans, who just said to hell with the whole thing, stopped brushing, and told each other that having black, decayed teeth was just a cool, fashionable look.

3 Before Trains, People Didn’t Care What Time It Was 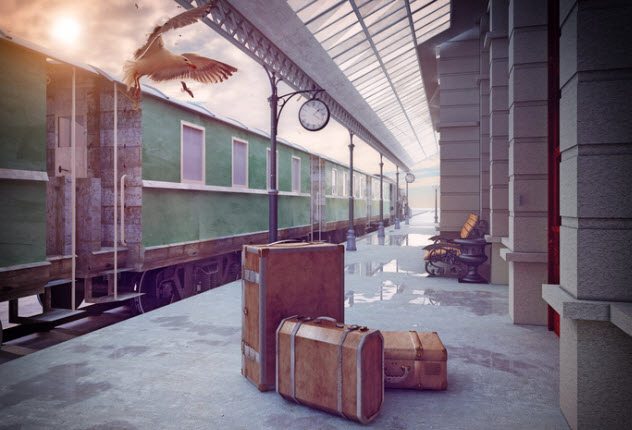 We’ve had clocks for a long time, and we had sundials before that. But that doesn’t mean people were glancing at the time every five seconds. Until the invention of the railway, knowing the exact time just wasn’t very important. So generally, people just didn’t care about the exact time.

There was no standardization of time until trains came along.[8] People would have a vague idea of the time of day, but it could be different from one town to another. The gold standard was the nearest sundial, which meant that you could be a few minutes off when compared to your neighbor and you wouldn’t really worry about it.

We didn’t become obsessed with time until the invention of the railroad. The Great Western Railway of England was the first company to actually set their clocks to a standard time, ushering in a whole new era of people worrying about whether it was one minute to nine or five minutes to nine.

Before that, knowing the time just wasn’t that big of a deal. Stores usually opened generally around a certain time. Nobody really cared that it was five minutes after eight o’clock and the hardware store wasn’t open yet. 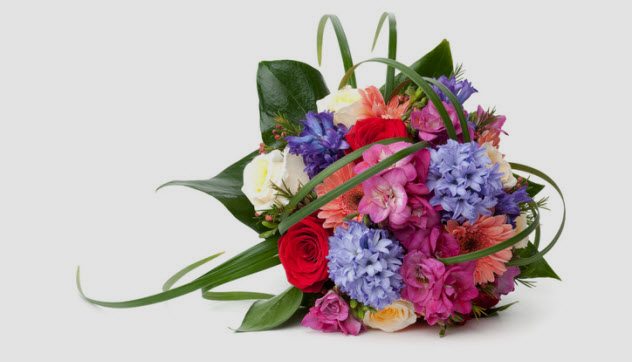 In medieval Europe, people would gift each other nosegays. They were little flowers that you could hold or wear on your lapel as a charming little touch of color—and as a way to stop smelling the horrible stench of everyone around you.

At the time, people weren’t quite as into the whole “bathing” craze as they were during other periods in history. In some parts of Europe, people only bathed once a month. Nearly everybody was walking around with such a horrible stench that they’d given up on making themselves smell good. Instead, they just wanted to keep themselves from smelling everyone else.[9]

So they started handing out these little flowers—and they didn’t even hide why they were using them. One book written in the 18th century specifically recommends giving nosegays as a gift. It says: “When you are in a crowd, smell to [the nosegay], and you shall pass through without difficulty.” 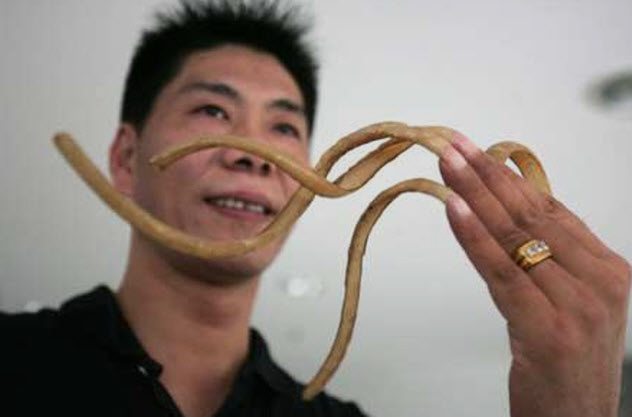 Fingernail clippers weren’t invented until 1875. Before that, keeping your nails clean took some effort. For example, Romans who cared about their appearance had to carefully pare away their nails with knives like they were carving the skin off an apple. Those who didn’t care probably just nibbled their nails away.

But that was only in Western society. In China, they handled it differently. They just didn’t clip their nails. Poor people in China worked so hard that their nails would just snap off on their own whenever they got long enough to get in the way. So they didn’t really have to bother with clipping them.[10]

But the rich people just grew their nails as long as they could. In China, having spiraling nails that were 0.3 meters (1 ft) long was a sign that you were rich enough not to work. So it became a fashion statement. Pretty soon, nothing said you had fashion sense like having massive, filthy claws extending out of your fingers like a monster in a horror movie.

10 Fascinating Facts About The Gift of Life